Yesterday we got up early and rented a motorbike from our guest house ($5 for the entire day) to go into Kep. First, we rode into Kampot to grab some breakfast. Zach really wanted to eat at a cool place we’d read about, Espresso Cafe, but they weren’t ready to open yet so we grabbed a bowl of ka tieu, a Cambodian beef noodle soup. It was excellent and very filling. 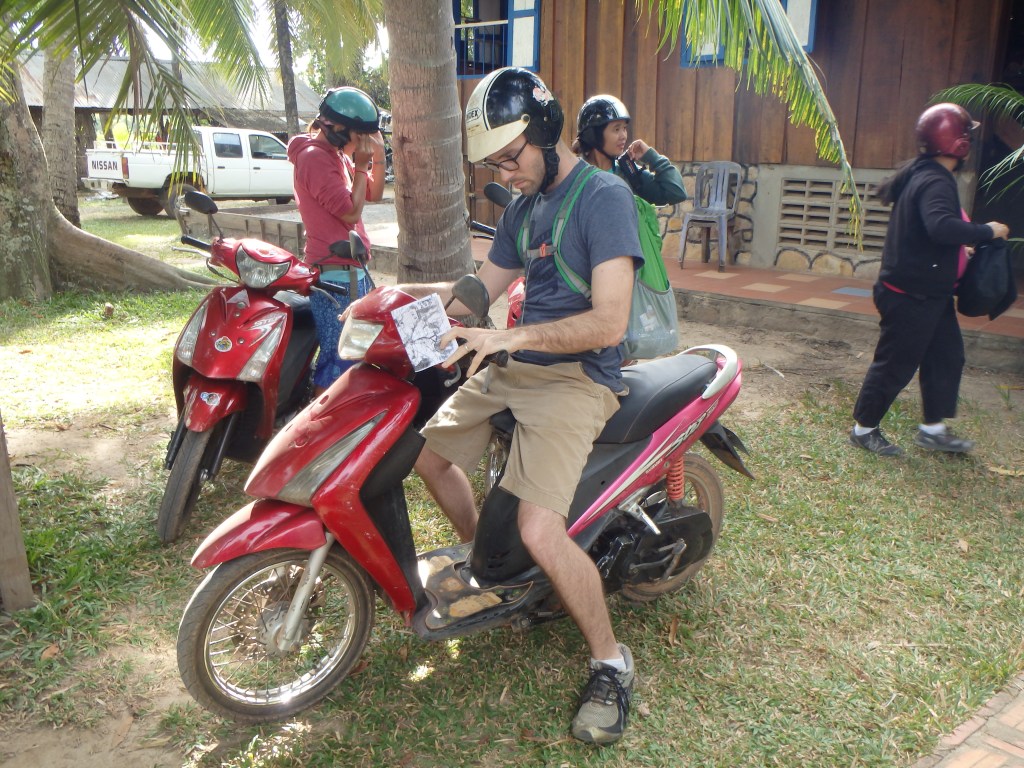 Zach says, “How do you start this thing?”

Getting gas on the side of the road

on the road to Kep

Kep is a sleepy coastal town which used to be a popular destination for the French to escape Phnom Penh. After the French left, Cambodia’s elite continued the tradition. It was once thought that it could be the French Riviera of Southeast Asia. But that never happened. When the Khmer Rouge gained power Kep was abandoned and the seaside villas were evacuated and eventually looted. We read that all of the villas were purchased in the 1990s by speculators but only a few have been restored to their former glory. Many of the villas we saw whispered faint memories of a glamorous past but their current inhabitants (squatters & monkeys) kept them firmly rooted in the present. It will be interesting to see which direction Kep moves in the future. Hopefully it can hold onto its past while also celebrating the future.

We rode around Kep and discovered a delightful coffee shop run by an American family – Kep Coffee Shop. They had real coffee and cake! I don’t think I truly realized how much I missed cake with frosting until I had a slice of their chocolate cake with peanut butter frosting. Mmmmm! (I’m still dreaming of it…) We really enjoyed talking with Brian and Savvy about their time in Cambodia and our time in Korea. It was really wonderful being able to chat with them. Their goal is to establish a self-sustaining business that can employ and provide a safe space for Cambodian women. We wish them all the best in their efforts; it’s such an important project. So, if you’re in Kep make sure you stop by and pay them a visit!

Such an adorable coffee shop

We left Kep Coffee to drive around Kep National Park. Brian told us how to go in the back entrance and somehow we found it! The park is extremely lush and peaceful. There are several hiking trails that we would have taken advantage of if we had been in town for a longer period. We did feel a little odd driving through the park on our motorbike since everyone else we saw was walking… I got off the bike and walked half the way while Zach drove. When we left there was an older man beginning the loop in a tuk tuk, so I guess it was alright. 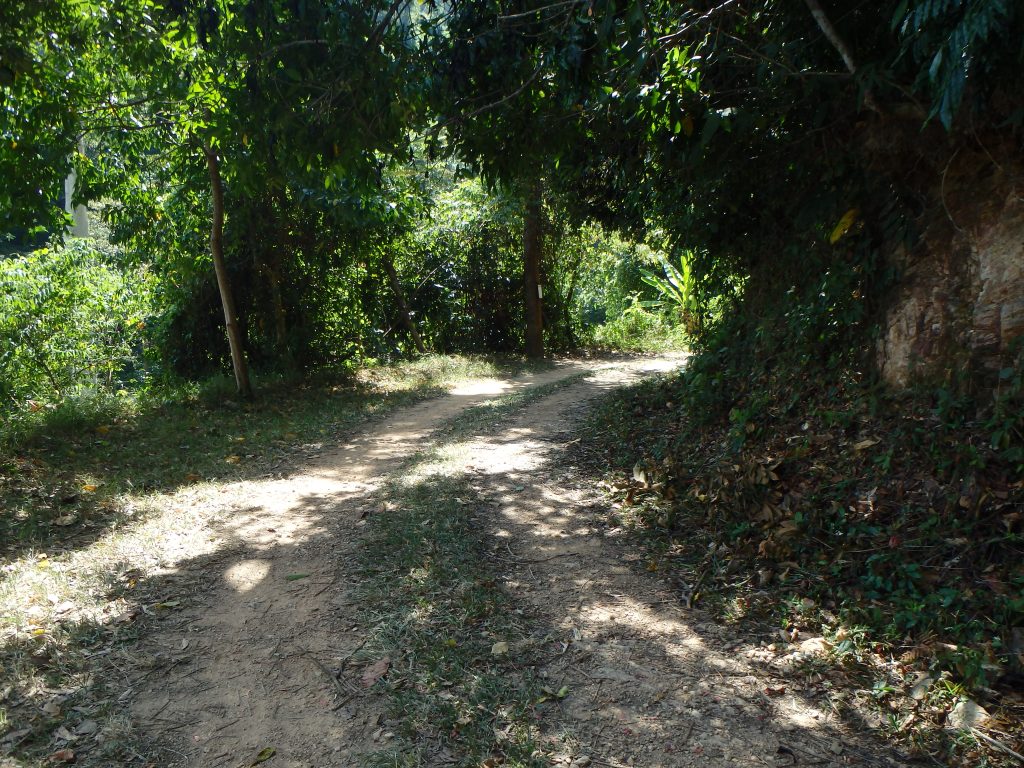 It was a very shady drive

A nice view of the bay 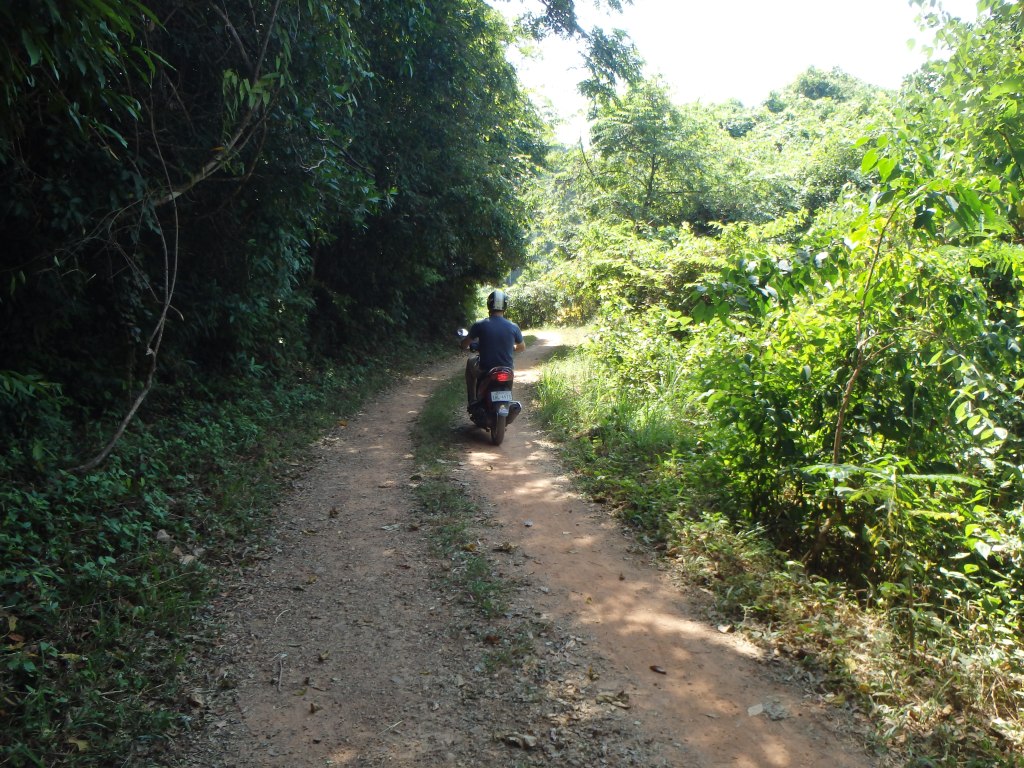 Zach leaving me in the dust

We met up at Led Zep, a small cafe located in the park with a gorgeous view of the ocean. It was the perfect place to grab a snack and a beer and read a little. 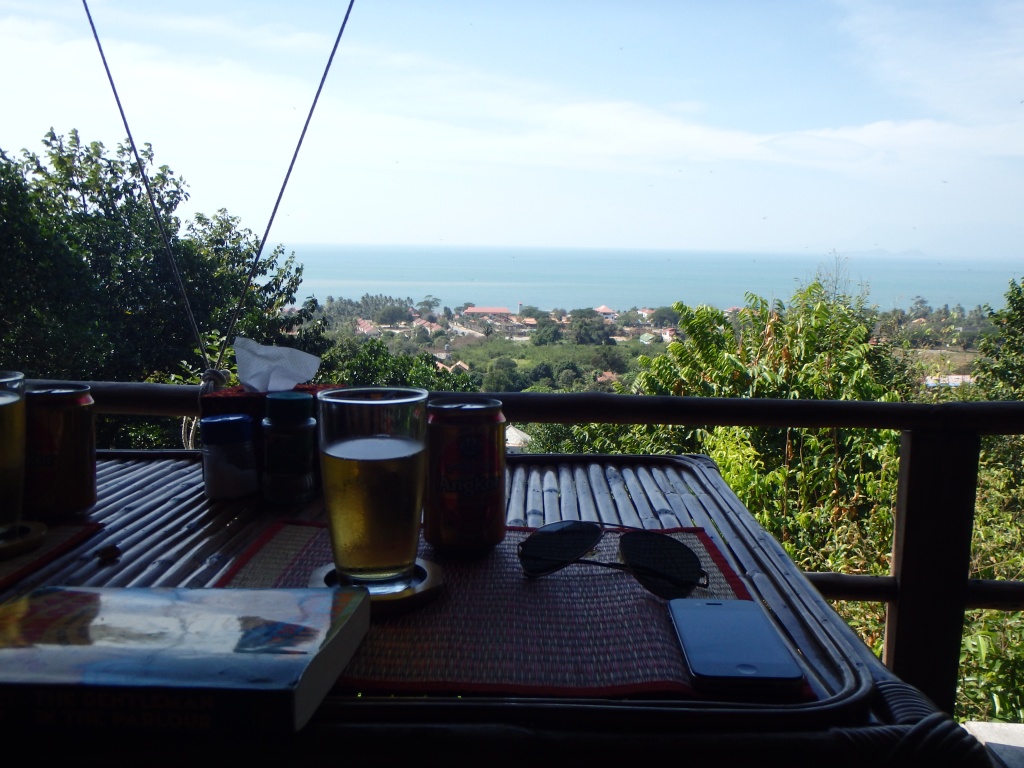 After we left the park we cruised around for a while on the coast. We spotted some monkeys and stopped to take their photo but they started hissing at us!! I was only able to snap one shot. Then we ended up getting a hammock on the beach and had some black pepper shrimp. It was really delicious and a nice way to pass the time.

This monkey was not having it 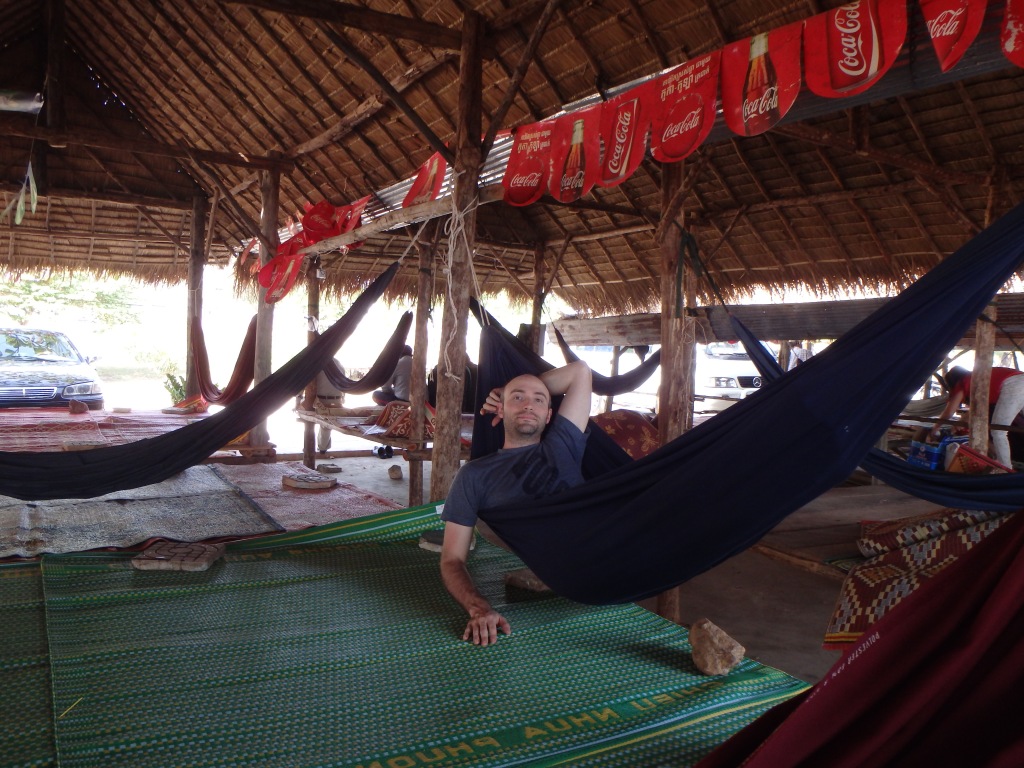 We had to run back by Kep Coffee before we left to have some chocolate chunk cookies and a little more coffee. We sat outside for a while talking with Savvy. It was really nice being able to find a new place and chat with the owners – I really miss that about the US. Anyhow, then we rode off into the sunset and back into Kampot for a quick meal before retiring at Les Manguiers. 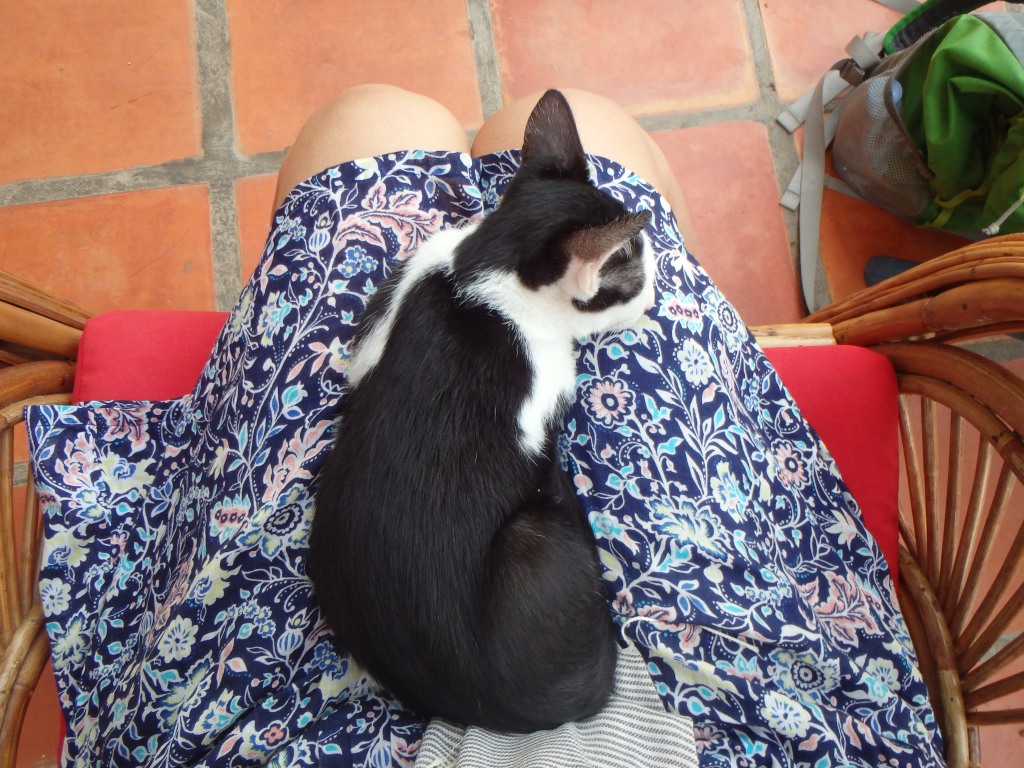 My kitty friend at Kep Coffee

hammocks along the shore 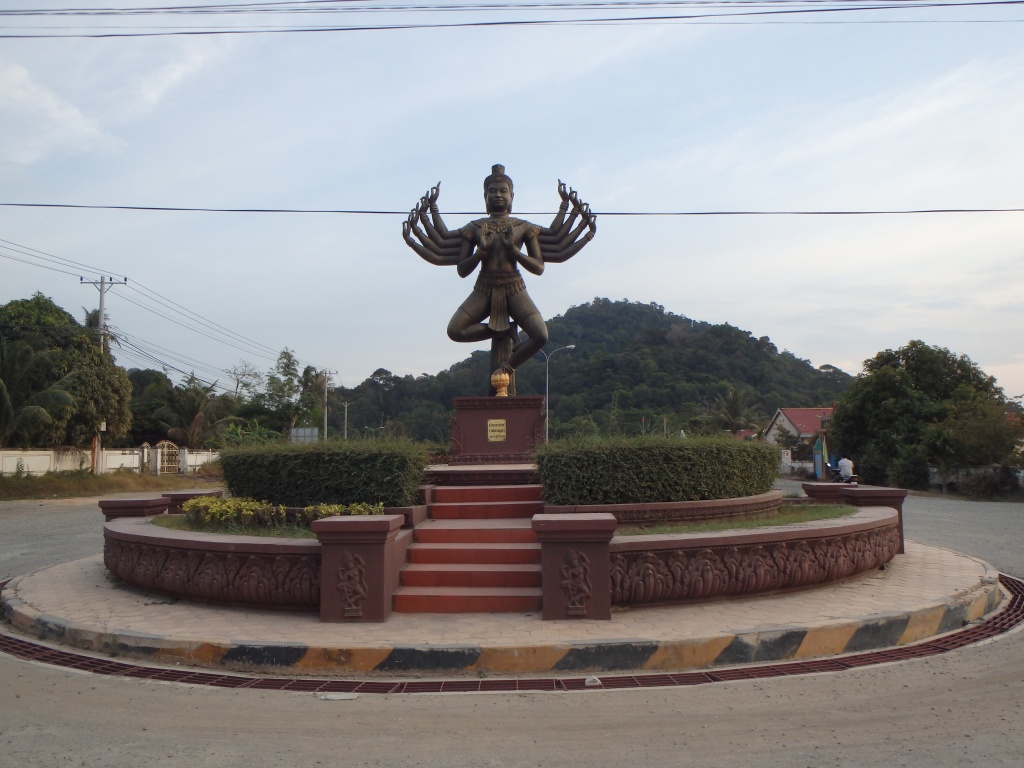 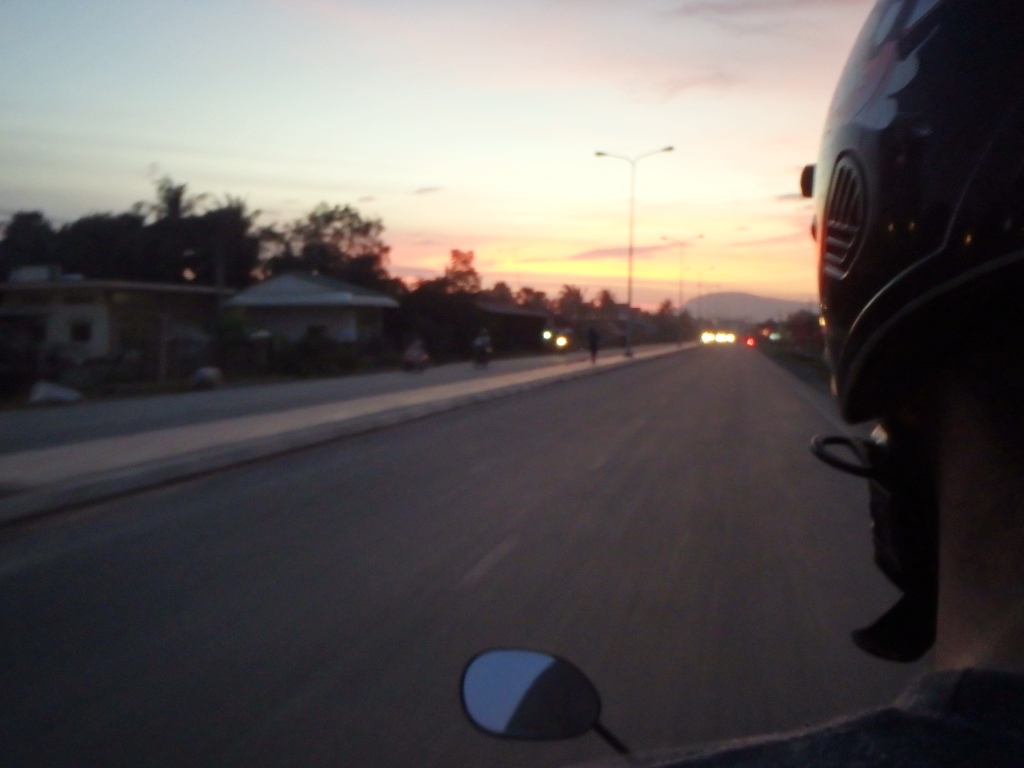