As the school year inches closer, I have to keep reminding myself that we still have several snow-free months left in Salt Lake. In the mountains, though, the days are numbered. So, in an effort to get in some more alpine time, we went out to the Uinta Mountains last Sunday to do an extremely long day hike to Amethyst Lake. While a day hike is completely do-able, it may not be the best method. Most people backpack to Amethyst and for good reason. It’s 6 miles one way with nearly 2,000 ft. of elevation gain and a particularly steep section after the first 2.5 miles. But it can be done.

The trailhead for Amethyst Lake is at Christmas Meadows which is clear on the other side of the Mirror Lake Hwy. from Kamas. We started at 10am and figured at 2 miles an hour, we’d reach the lake at 1pm with plenty of time to relax lakeside before heading back down.

The beginning of the trail is beautifully pleasant. A little on the wet side, there are several boardwalks to help navigate some of the muddier areas, though there were several areas we had to negotiate in or around the mud ourselves. There are also multiple water crossings, some small, others more trying. After my stint at Sawtooth Lake, I was happy to come away from this hike without wet socks.

One of several boardwalks in the first few miles 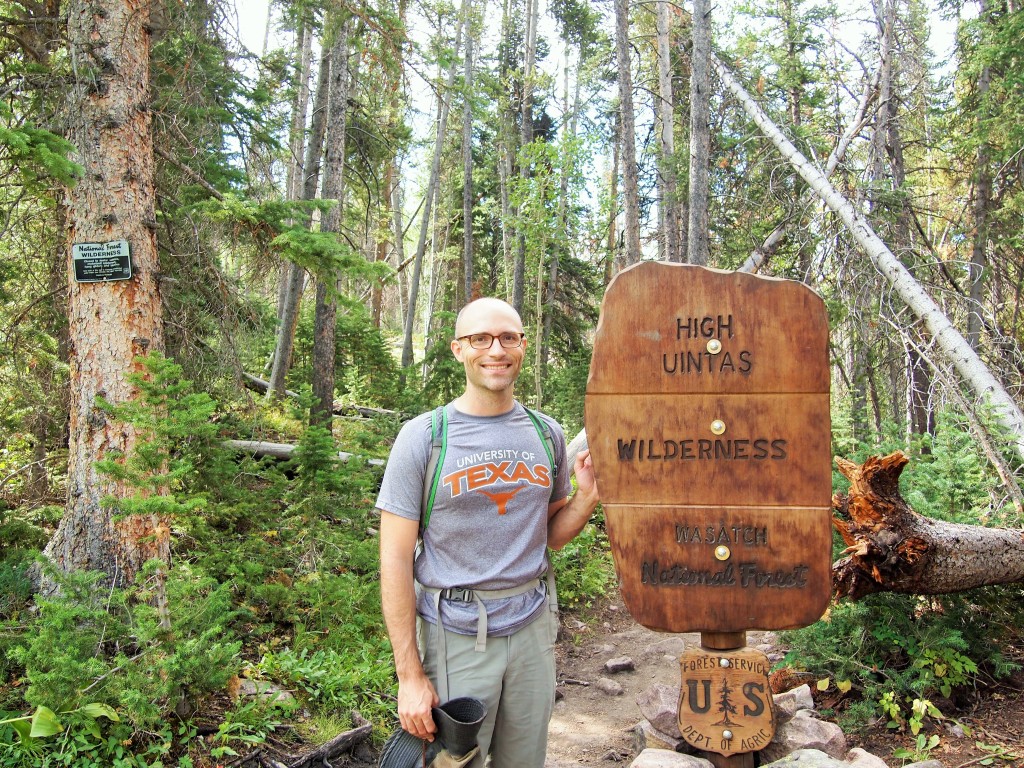 After the first 2.5 miles, we reached a trail split. We went left for Amethyst and almost immediately the incline sharpened. This section of the trail is the most difficult; we carried day packs but I can imagine an additional 30-40 lbs. would have you taking several breaks. It’s not just the incline but the terrain that makes this section so strenuous, especially on our descent. The trail is very rocky with a lot of loose gravel under foot. I was kicking myself for not bringing my hiking poles. Eventually, the trail evened out a bit. We were still climbing for most of the trail, but not with such a steep gain.

This section leads you alongside several falls.

One of many meadows along the way 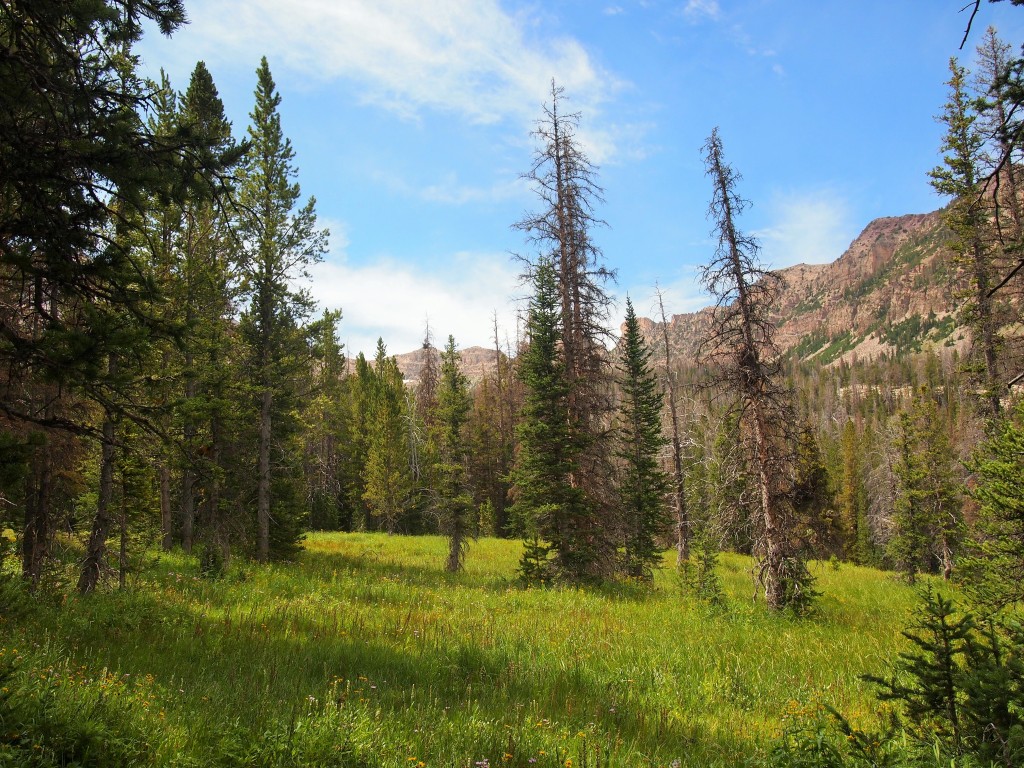 We begin to get out of the trees here and there too. 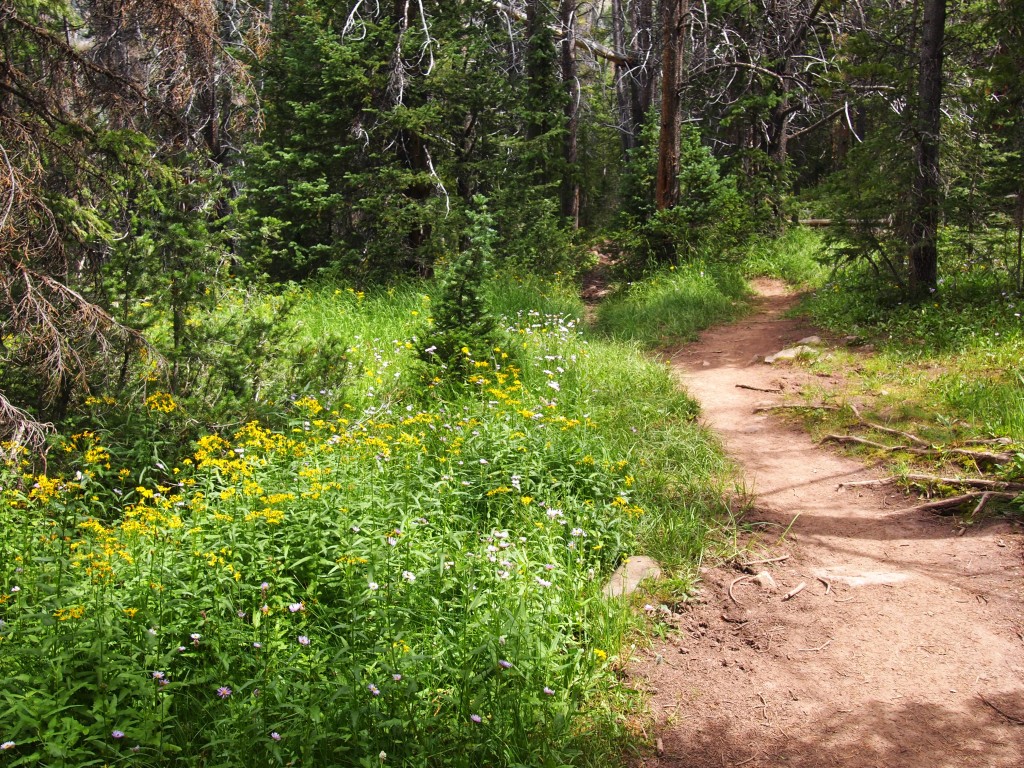 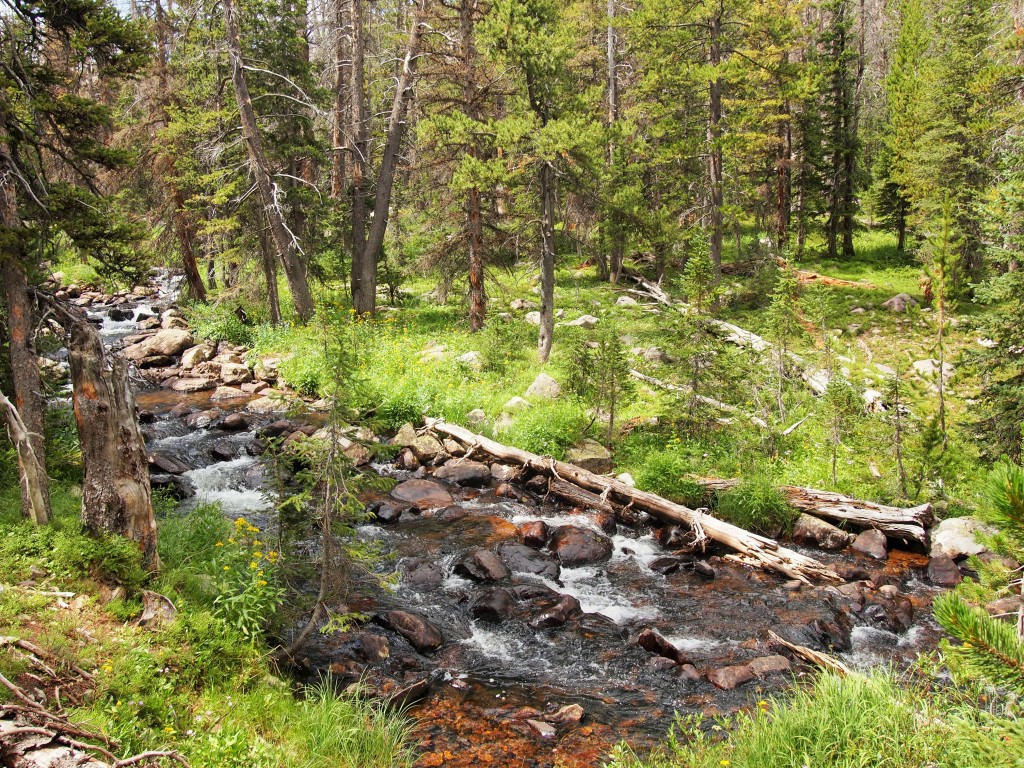 After what felt like ages – but was only 5 miles – we entered a gorgeous, open meadow. We could finally see our destination at the back of the basin and only had one mile to go. If we were backpacking we would have found a place along this portion of the trail. There was a beautiful stream flowing down from the lake that wound its way through the meadows below which would make for a peaceful campsite.

What a relief! We can see our destination to the far right. 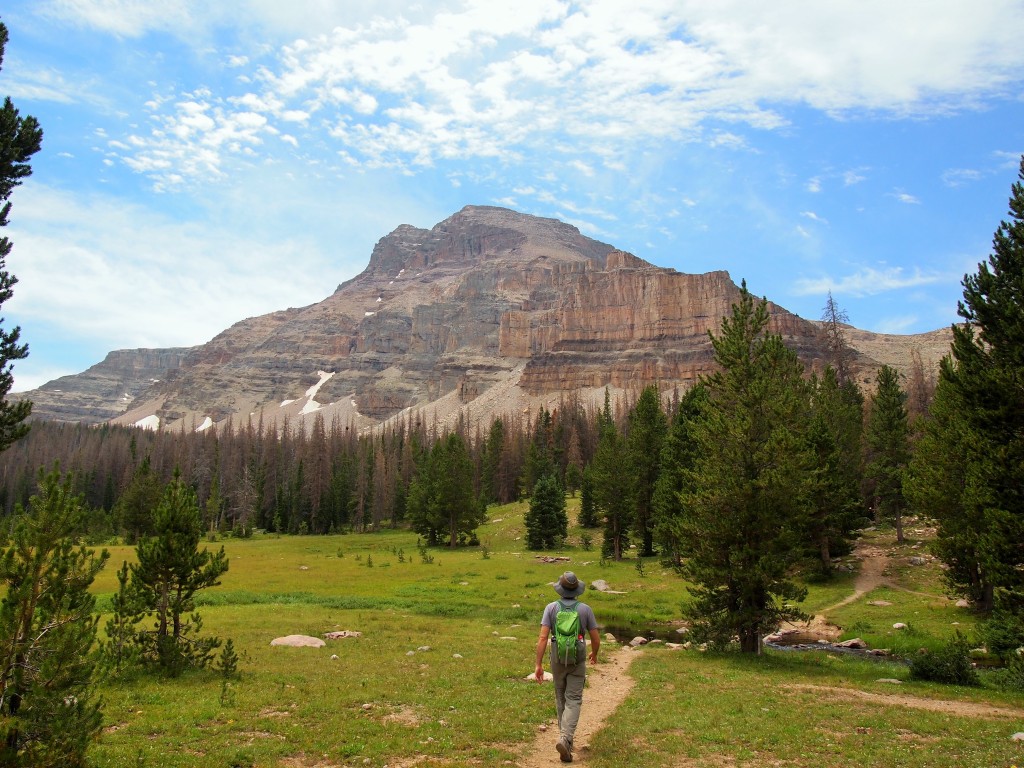 Zach with Ostler Peak looming in the background

This is the final meadow before you hit the lake

I was so happy to reach the lake. We were tired, hungry, and ready to rest. Amethyst Lake sits in the bottom of a giant basin which Zach called a cul-de-sac of mountains. We walked around the perimeter of the lake looking for a good spot to set up our hammock and found a nice lakeside spot on the northwest side. We strung up our hammock, chilled our beers in the lake, and broke out our lunch. We spent two hours resting by the lake taking it all in. There were some fishermen and backpackers when we first arrived, but they cleared out shortly after we set up and soon we were all alone.

Not a bad spot

This is the view from the north end of the lake

Unfortunately, we had to hike back down. We passed a couple groups of backpackers heading up for the night – I was not envious of their loads. The hike down was much more pleasant until we hit the final 3 miles or so. There we had to go down that steep stretch of rocky terrain, and then continue on and on for what felt like ages. Near the end, we came across a large bull moose munching in an open meadow. It was the closest we’d ever been to one. He was only 20 yards from us. We were cautious, pausing to make sure he wasn’t going to charge, and then crossed by his meadow. I waited until we were at a safer distance to snap his photo. Shortly after that we were finally done. With sore legs and hungry bellies, we climbed into our car to start the trip back to Mirror Lake Hwy. but were detained by a herd of sheep! Not exactly what I expected to encounter. They let us slowly drive past and then we were truly on our way back home.

There were some nice backcountry sites set up near this stream 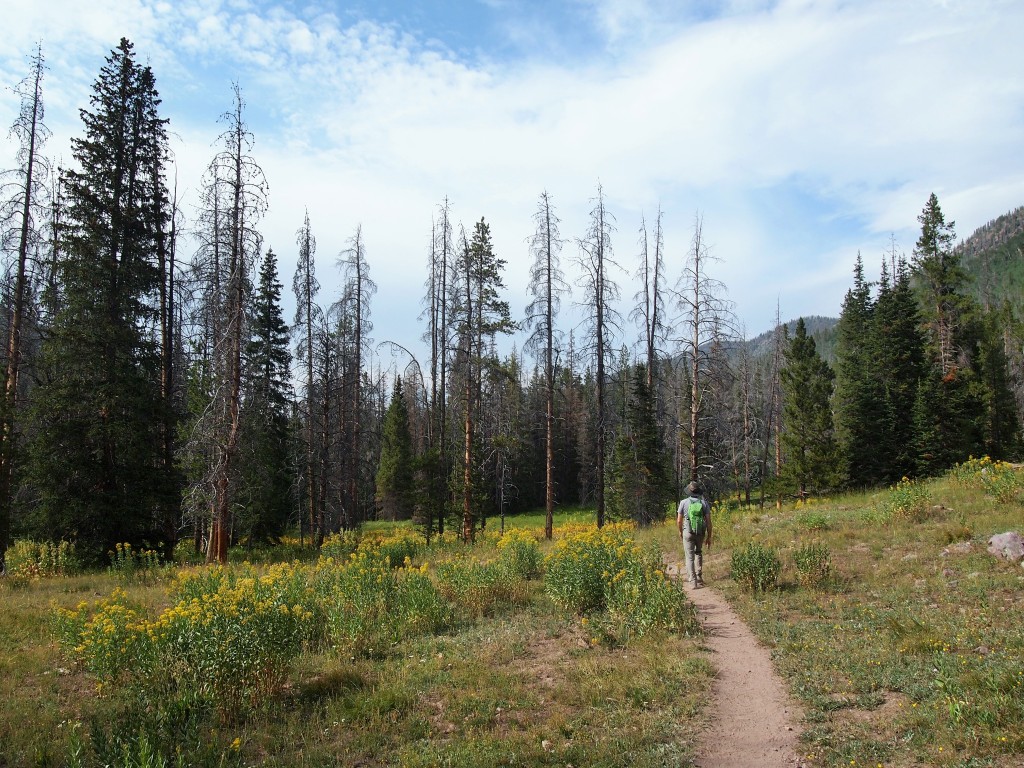 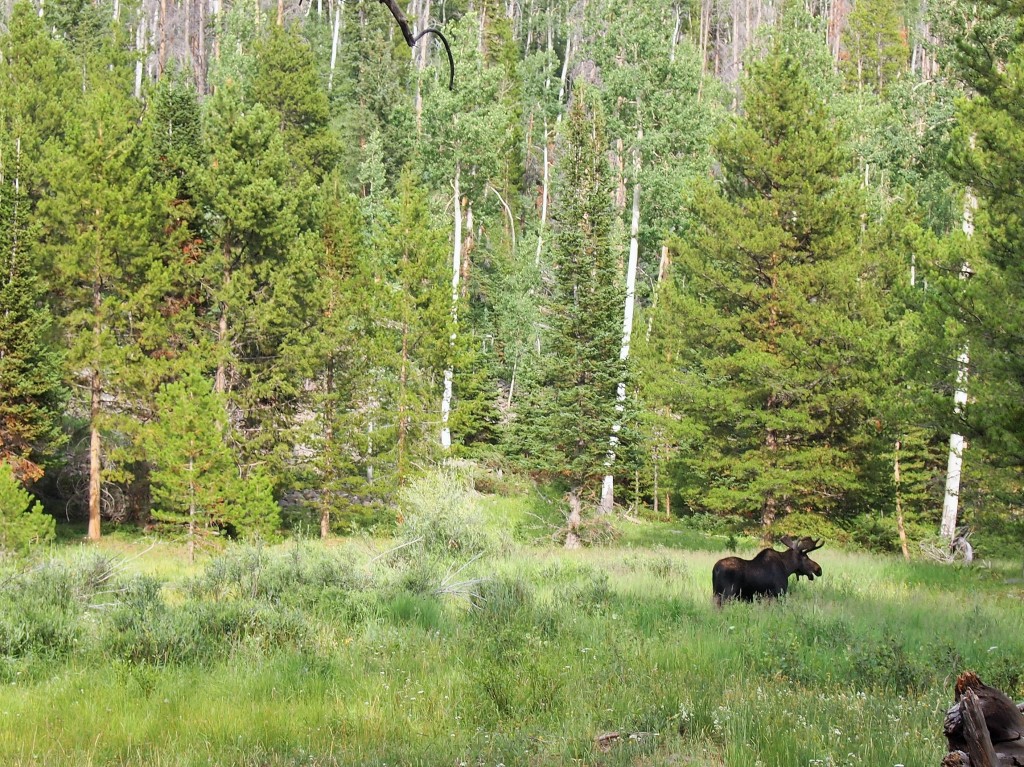 A new kind of road block