The next morning we were up at 6am to prep for our hike and pack up our site. We aimed for a 6:45/7am start, and we were parked and walking to Lake Louise at ten till seven. The morning was quiet and bright with few people stirring. It was so tranquil that it nearly redeemed the experience of Lake Louise for me. The absence of all the people allowed us to enjoy the pure beauty of the lake and its setting.

Though not the most popular trail at Lake Louise, The Plain of Six Glaciers is a close second. I chose this trail instead of Lake Agnes because I wanted the expansive views, a slightly longer hike, and hopefully fewer crowds. If we’d had a full clear day, we would have combined this hike with Lake Agnes AND Big Beehive. But we’ll have to save those for another time.

The beginning of the hike simply followed the shoreline to the western end of the lake. Then the real hike began. It was a continuous climb up nearly 1500 ft. first through a nicely shaded forest and then into more exposed sections. Soon the trail cut through part of the glacial moraine and presented a view of Lake Louise far in the distance. The panoramic views on this section of the trail were jaw-dropping. To make it even better, we had the trail almost entirely to ourselves, passing only a smattering of people who started before us. The sun was out, the sky was clear and blue, and we were making great time.

Leaving the lake behind

Lake Louise down below

When we reached the teahouse we decided to go ahead to the viewpoint first. Only another kilometer away, the trail ends at the top of a lateral moraine. Cutting through a forested section briefly, once the trail reaches the moraine, it becomes narrow and at the end, quite steep. It was worth the extra effort though. We were only the third couple to reach that point for the day, and we had a long chat about hiking in Utah with the two American hikers in front of us.

From the end, we had superb views of Upper and Lower Victoria Glacier and Mt. Lefroy. We could also make out the Abbot Pass Hut on the skyline which is still used by climbers who want to summit Mt. Lefroy or Mt. Victoria. Right in front of us was “the death trap,” a narrow chute between Mts. Lefroy and Victoria so named because it leaves climbers exposed to avalanches from Mt. Victoria. Additionally, we had quite the view of the moraine, an area once covered by the Victoria Glacier. It was an incredible contrast between the photographs from the early twentieth century and now. 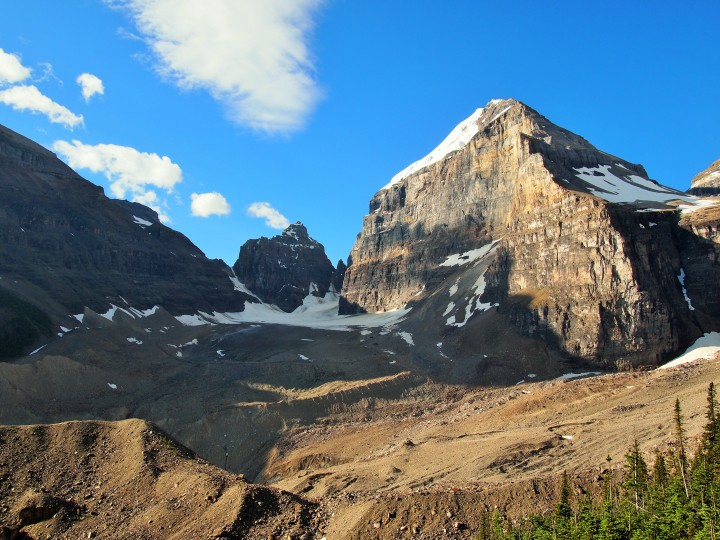 What was once covered by glaciers

Zach poses with “the death trap”

We returned to the teahouse and found that more people had come up behind us. Thankfully, we were able to find a seat on the upper balcony. The Plain of Six Glaciers Teahouse was built by the Canadian Pacific Railway and opened in 1927. We had tea (me), coffee (Zach), and biscuits with jam. It was a nice treat and a tranquil place to take a break before heading back down.

After our delightful snack, we stood in front of the teahouse again admiring the incredible views. A large mass of clouds was beginning to roll in, and we knew the afternoon rain wasn’t far behind. We made the descent fairly quickly, and I was tempted to suggest diverting to Lake Agnes. But for the rain. There were SO MANY PEOPLE coming up as we went down. I was glad we had started out so much earlier for that reason alone. I was a little shocked by the attire – especially shoes – some people wore as they made the trek up. It definitely isn’t an easy hike… 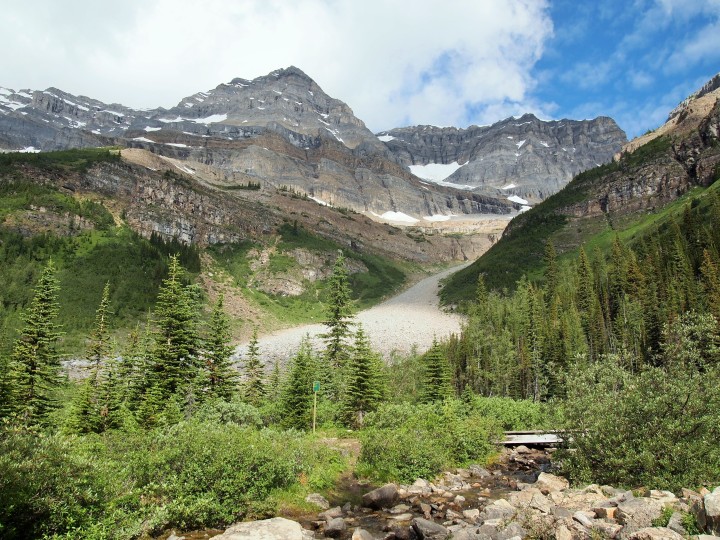 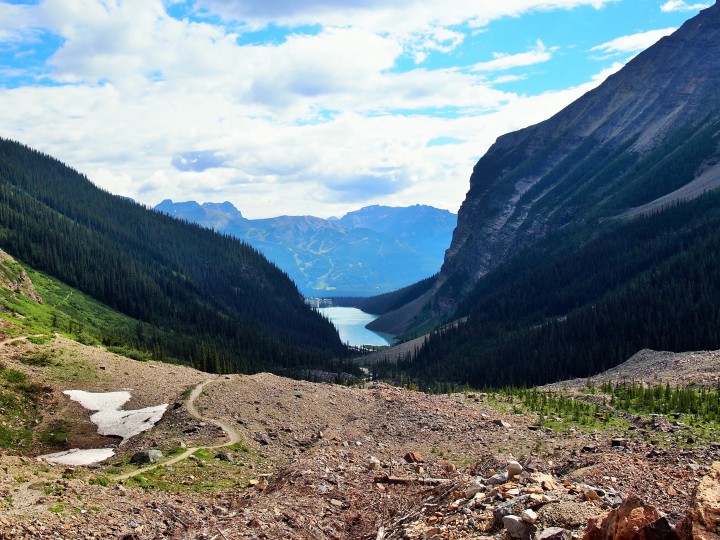 You can make out the monstrous Fairmont Chateau

Clear skies ahead, cloudy ones behind

We said our goodbyes to Lake Louise, weaved through the crowds, and drove to the village. Our next stop was… somewhat undecided. We wanted to buy some groceries and re-supply our ice reserves. It was maybe 30-45 minutes after we had departed Lake Louise that the rain began. Brief at first, it came in another wave after we had started driving toward Yoho NP, and then a final installment after we had set up camp for the evening. I didn’t regret leaving those other trails for another, sunnier visit.

What We're Up To Now

Low key three-day weekend; got outside everyday, but only had sun on one. Trying to embrace the overcast days too...
Yesterday we went to Bogus Basin for the first time this season to snowshoe and get our snow fix (cuz I miss it). ❄️❄️❄️ Do you see @zachbuie hiding in the trees??
Yesterday we explored the Oregon Trail Reserve on the east side of town. There are pieces of Oregon Trail history all around Boise (and southeastern Idaho), and I plan to schlep Zach and Tru around with me on my quest to find them all. Here, Truman stands on the Kelton Ramp. It was chiseled out of the basalt cliffs so wagons could make their way to the Boise River and its oasis of water and shade. It was added in the mid-1860s, so others must have had a helluva time getting themselves down to the river. • • • • #boise #boiseidaho #oregontrailreserve #oregontrail #boiseparks
Was there any better way to ring in 2020 than by watching a giant potato fall from the sky and screaming for french fries?! I don’t think so.💥🥔🍟💥
It only dawned on me today that this year marks the end of an extremely eventful decade for me. It was my first decade as an adult out of college; I started traveling around the world; I married Zach; we got Truman and turned him prematurely grey (it’s dapper!); I lived abroad; I lived in a town that was wayyy too small for me; I left Texas; I moved west. Most of the time I still feel clueless about what I’m doing with my life. I think I’m less idealistic and more cynical. But I’m curious to see where this new decade leads, so let’s get it goin’.
We went to Ponderosa State Park for the first time on Saturday. Put in six miles on our snowshoes, met a family of deer, and rewarded ourselves with po’boys at Frenchie’s.😊 • • • • #ponderosastatepark #idahostateparks #idaho #idahome #mccallidaho #snowshoeing