The next morning, we were up early to drive to Yoho National Park. We stopped in town for coffee and a pastry before driving back up the Trans-Canada Highway. Yoho NP is not much of a park for the motor tourist. There are a few sites which are easily accessible from the car, but really, the appeal of Yoho is in its hiking trails.

When I was planning our trip in late winter, my goal was to obtain a camping reservation at Lake O’Hara. A pristine and breathtaking hub of alpine lakes and hiking trails, Lake O’Hara is 6.8 miles from the nearest public road. Although you can walk the 6.8 miles to the lake, it would be a considerable journey which you would have to repeat to leave at the end of the day. Seats on the few buses which run each morning are available for reservation exactly three months in advance for day hikers, overnight campers, and clients of commercial tours (which are $$$). I hoped to spend two nights camping at the lake which would give us ample time to hike in the area. Sadly, the reservation system has not been moved online, so those interested must call and hope to get through to a person. I was prepared to make this sacrifice. I went to my office early, checked my emails, closed my door, and began calling promptly at 8am. I dialed, re-dialed, re-dialed, re-dialed. But it was for naught. I never got through. I called consistently until 10am and then spaced my attempts out until their lunch break at noon. Most reservations are filled by 10am, so I called a couple times in the afternoon, but I’d lost all hope by then. I was more than disappointed. It’s easier to get Sundance tickets…

Since I wasn’t able to obtain a reservation for Lake O’Hara, I chose a trail in the Yoho Valley for our visit. I wanted to do a full day hike and get the most out of our single-day visit to Yoho. I ended up picking the Iceline Trail via Celeste Lake, a 12 mile RT hike with nearly 2,500 ft. of elevation gain. We didn’t get as early of a start as we would’ve liked, but it worked out.

We parked at Takakkaw Falls and walked over to admire it before starting out. Takakkaw, which means wonderful in the Cree language, spills over the edge of a cliff and ends 830 feet below in the Yoho River. Its immense power is heard and felt just from the parking lot. The source of the falls, Daly and Des Poilus Glaciers, sit atop the Continental Divide above. These glaciers were later visible to us from the Iceline Trail.

Takakkaw Falls in the morning

We followed the trail away from Takakkaw Falls and back to the road and the Whiskey Jack Hostel. From the other side of the road we could see our daunting ascent, where the majority of the total elevation would be gained. The Iceline is a popular trail, and our 10am start meant we weren’t ahead of others. But we made up for it on the initial ascent, using our Wasatch-trained muscles and lungs to pass many people huffing and puffing their way up.

Looking toward the hostel and our ascent

Luckily it was a nicely shaded series of switchbacks

A view of Takakkaw Falls

I hadn’t done much research on the trail, so I didn’t really know what to expect. When we began to emerge from the trees, I was stunned by our views. We could see clear across the valley to the glaciers sitting astride the Continental Divide. 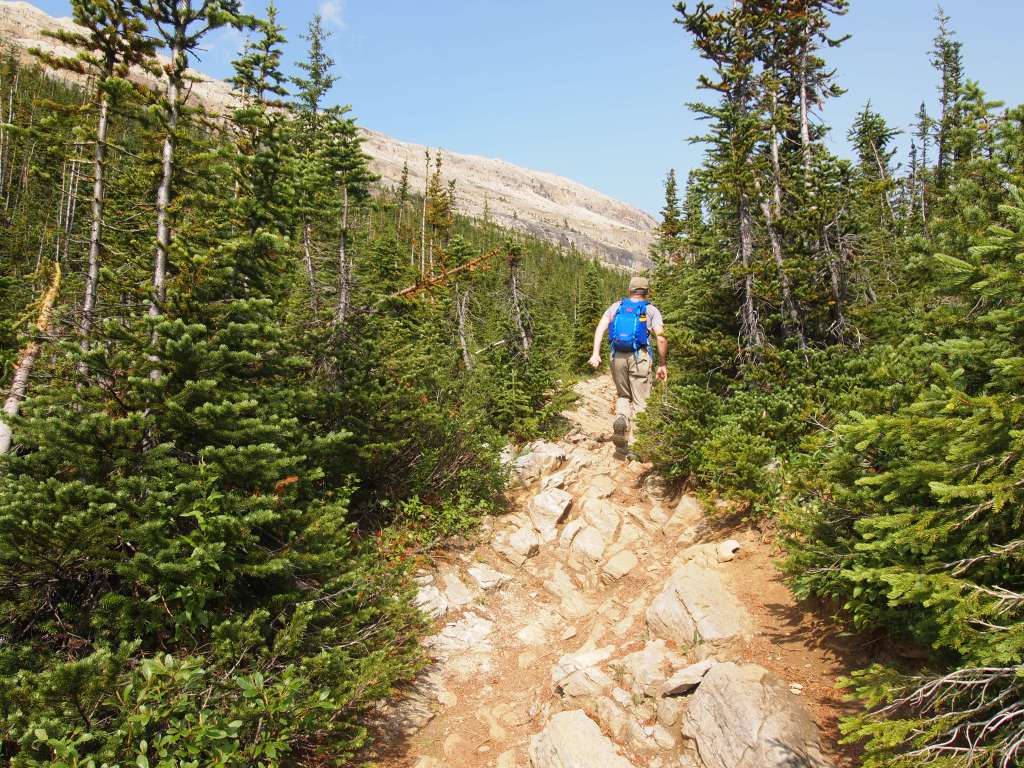 Beginning to emerge from the trees

Since I didn’t have any expectations, I was already content with our views. We could see for miles, and it was breathtaking. We continued to climb slightly higher as we left the treeline behind and entered a glacial moraine. Our view to the east had entranced both of us, while views to the immediate west remained blocked. But soon we reached a crest where the trail opened up before us, and I almost lost my mind. What lay in front of us was spectacular. It was so unexpected that I didn’t even know how to react. There was a lot of swearing to say the least. 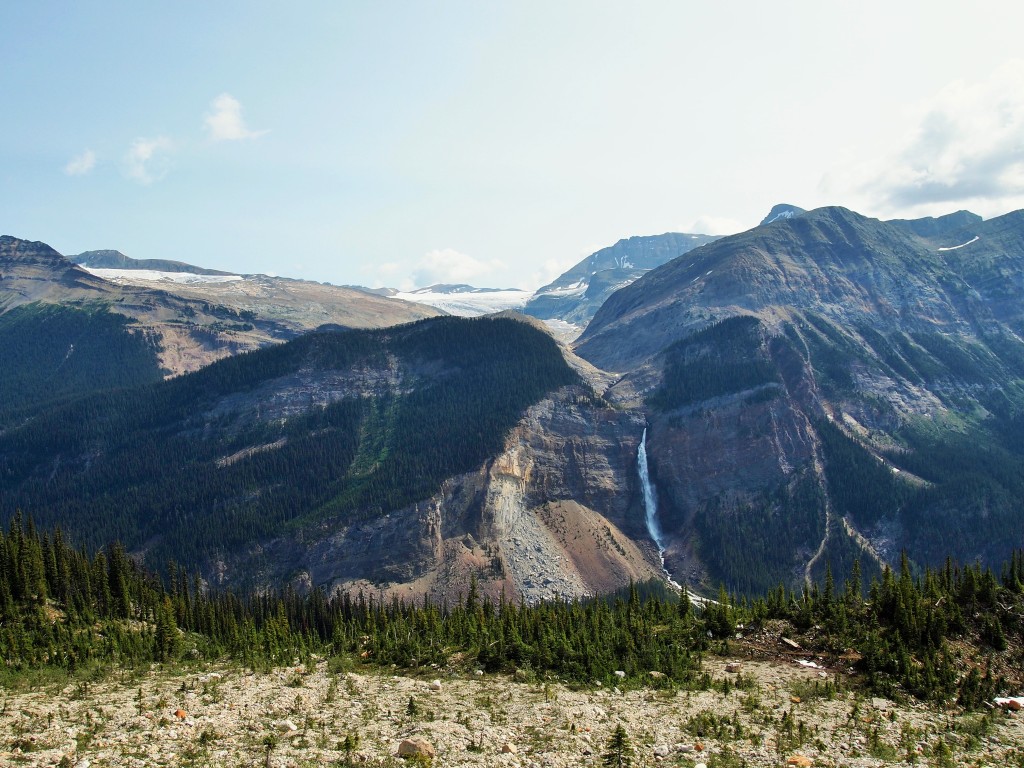 The Daly and Des Poilus Glaciers above Takakkaw Falls 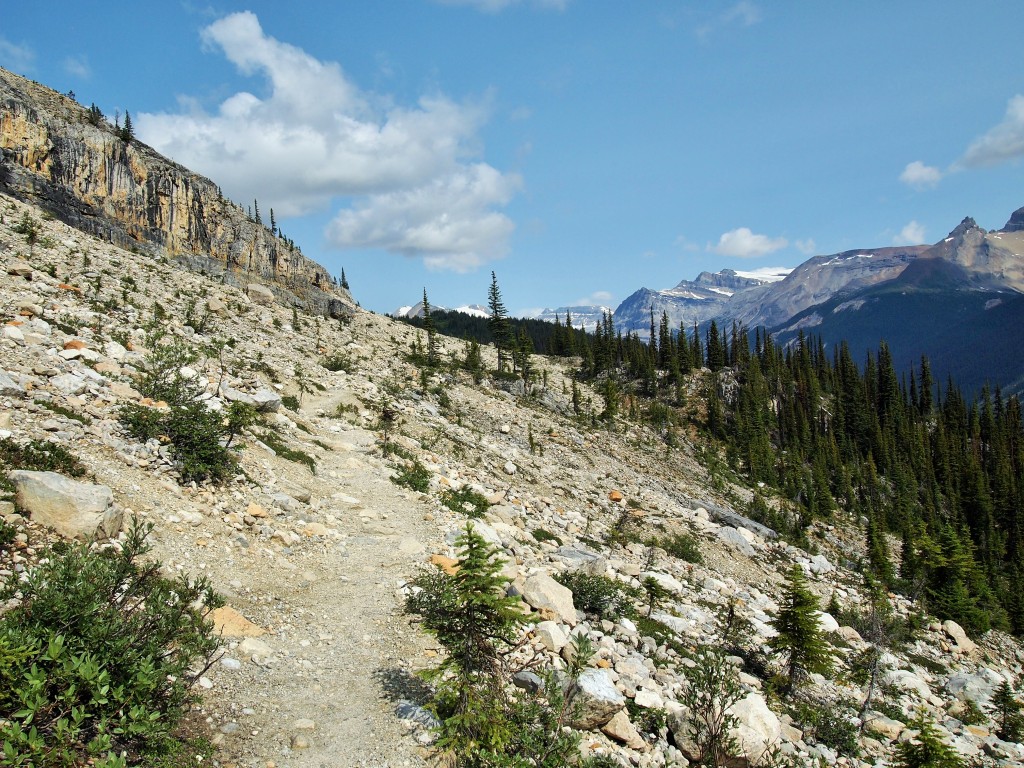 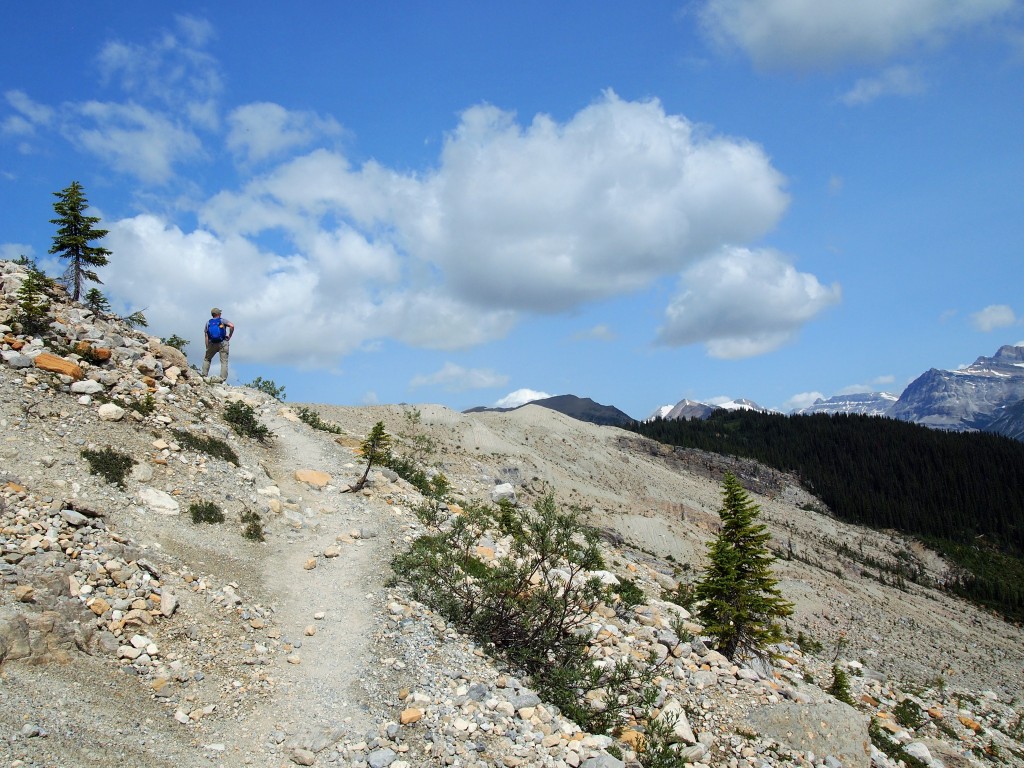 Zach stands at the crest 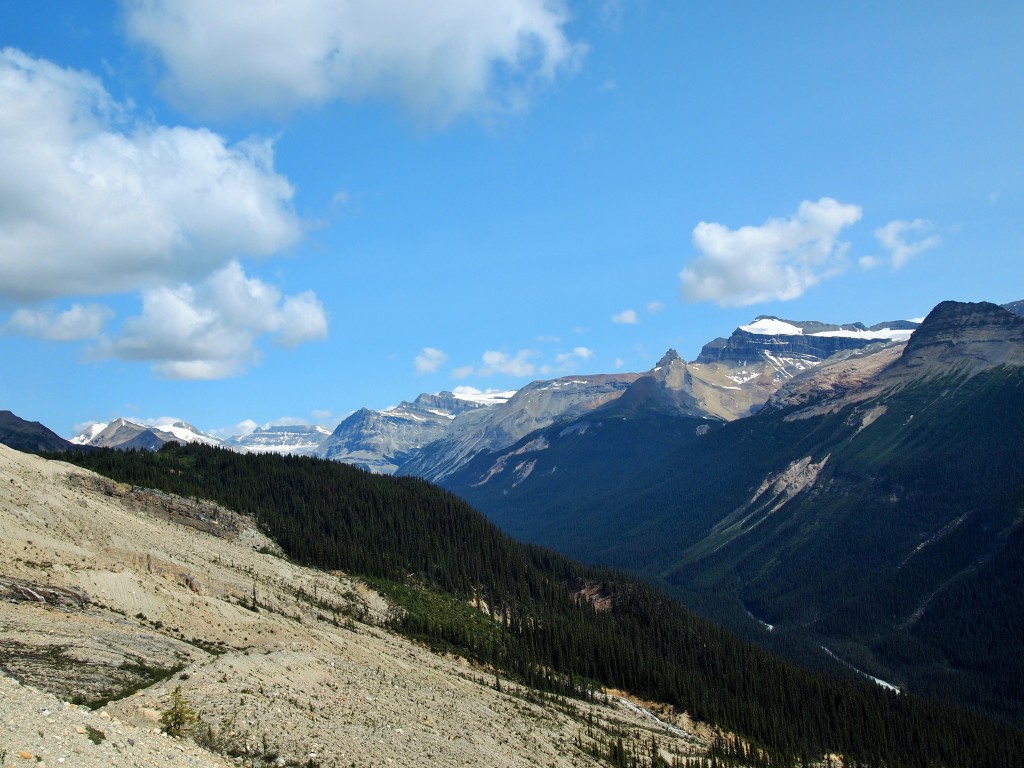 I was preoccupied with this view

The trail cut through a moraine directly below Emerald Glacier. It was such an incredible turning point in the hike. I frequently had to remind myself to keep walking as I gawked and took far too many photos. It’s difficult to accurately gauge the true scale of everything in my photographs. I used Zach a lot, but even still, it’s so much more striking in person. 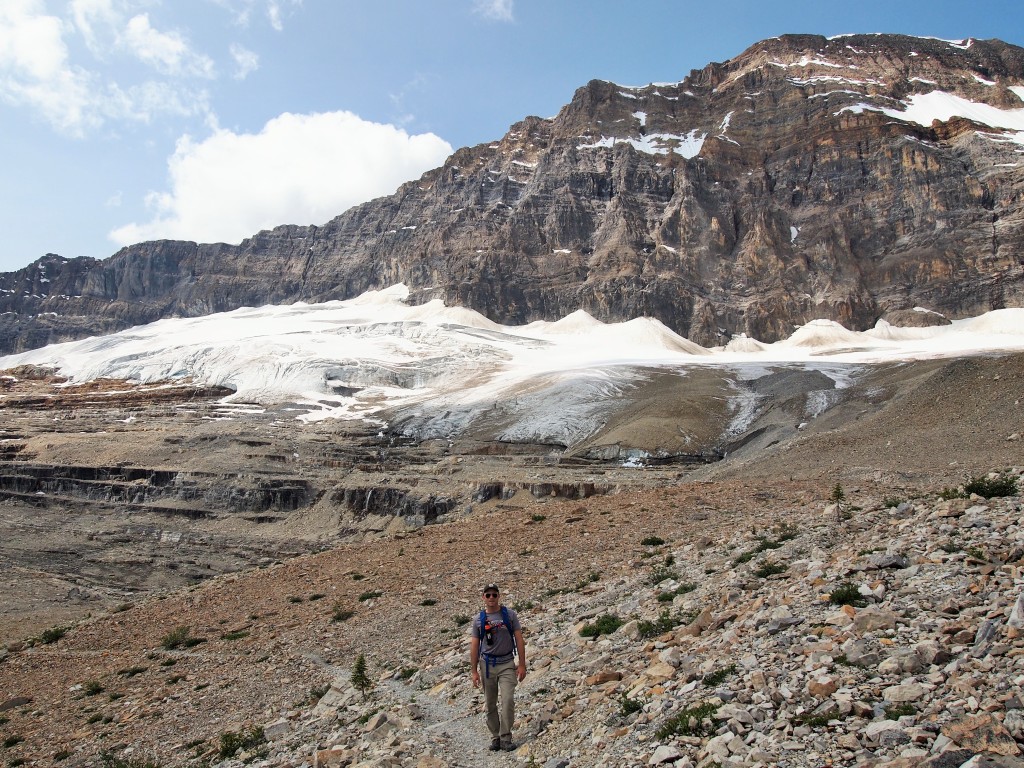 This portion of the hike wasn’t particularly long, but it was so stunning. Each time we had to climb any kind of rise, it resulted in yet another jaw-dropping view. We passed a series of glacial melt pools and came to the junction for Celeste Lake. In the distance and on my GPS, we could see that we were close to the Iceline Summit. We decided to continue ahead, have our lunch on the summit, and then double back to the junction. 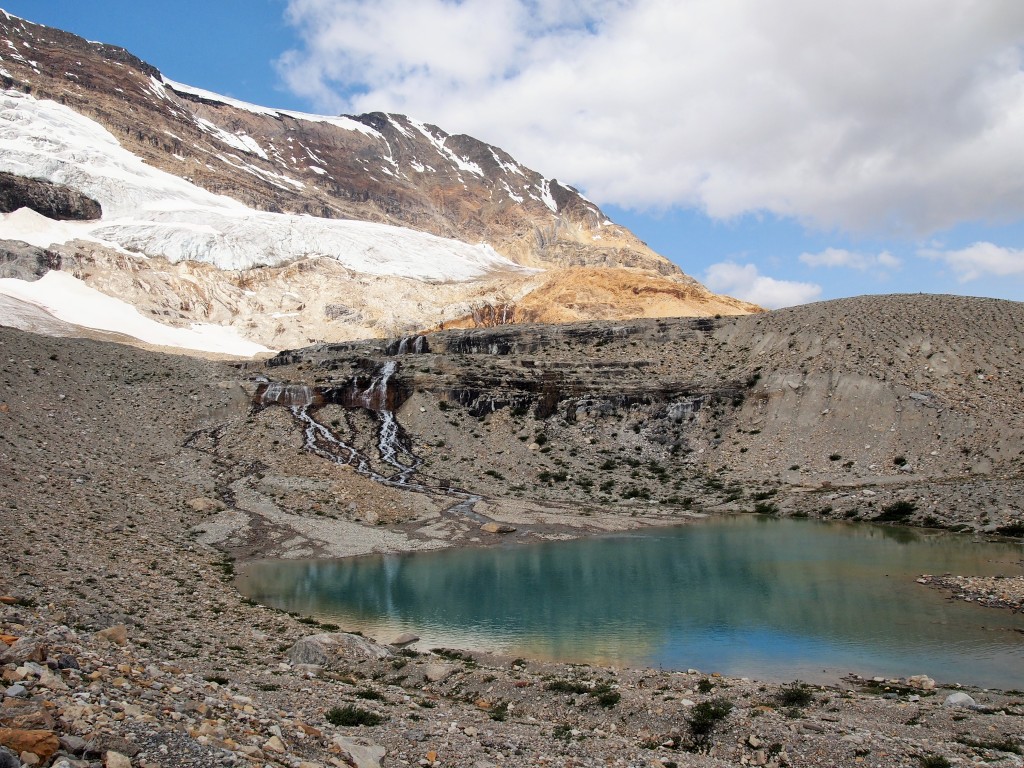 If you look closely, you can see small hikers following the trail 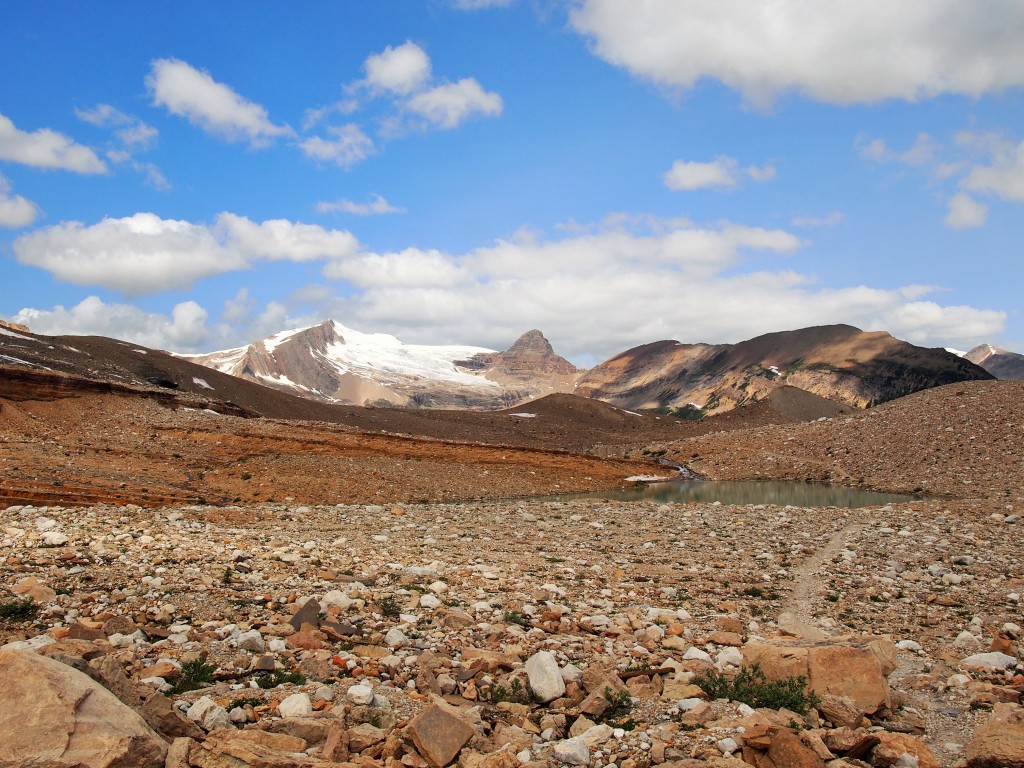 The junction was by this larger pool

The summit was located up another small hill just off the trail. It was fairly steep and a little treacherous, but worth the effort. When we arrived at the top, a group of four was beginning to descend – perfect timing. We had the summit entirely to ourselves for our lunch. We had views in every direction, and it was hard not to feel supremely lucky.

It would have been possible to continue along the Iceline Trail to the Little Yoho Valley and then loop back down to Takakkaw Falls, but that would have extended our hike an additional 3-4 miles. It was tempting, but we wanted to visit Emerald Lake afterward. So we turned back and took the turn-off at the Celeste Lake junction. 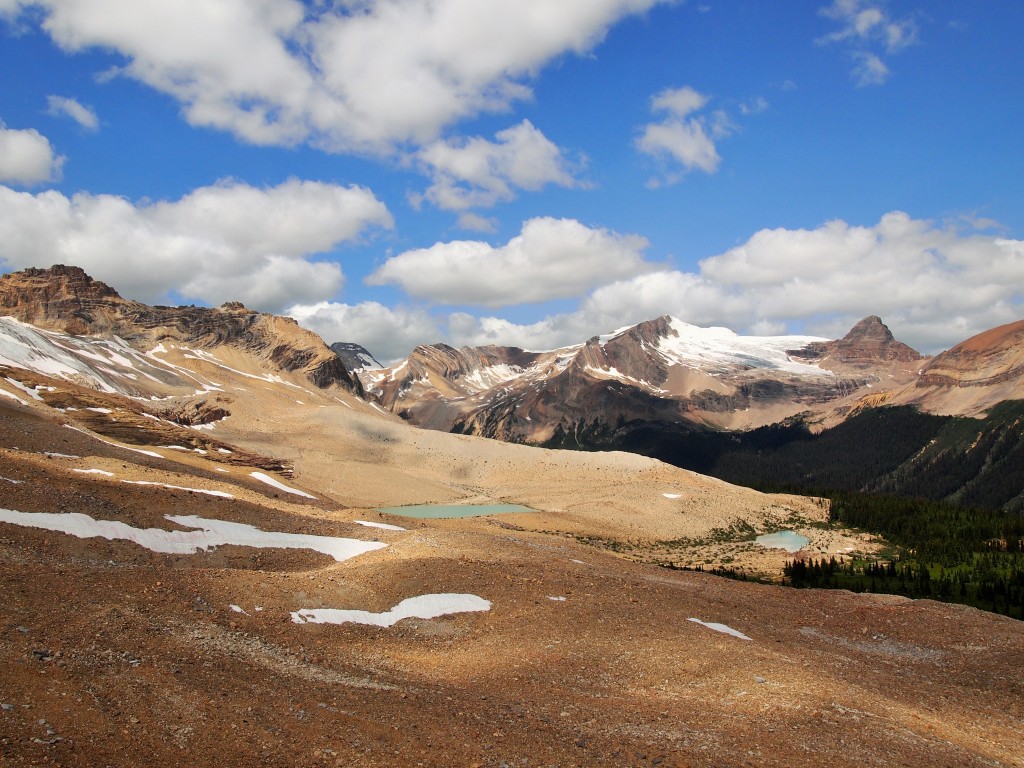 The view north – my favorite 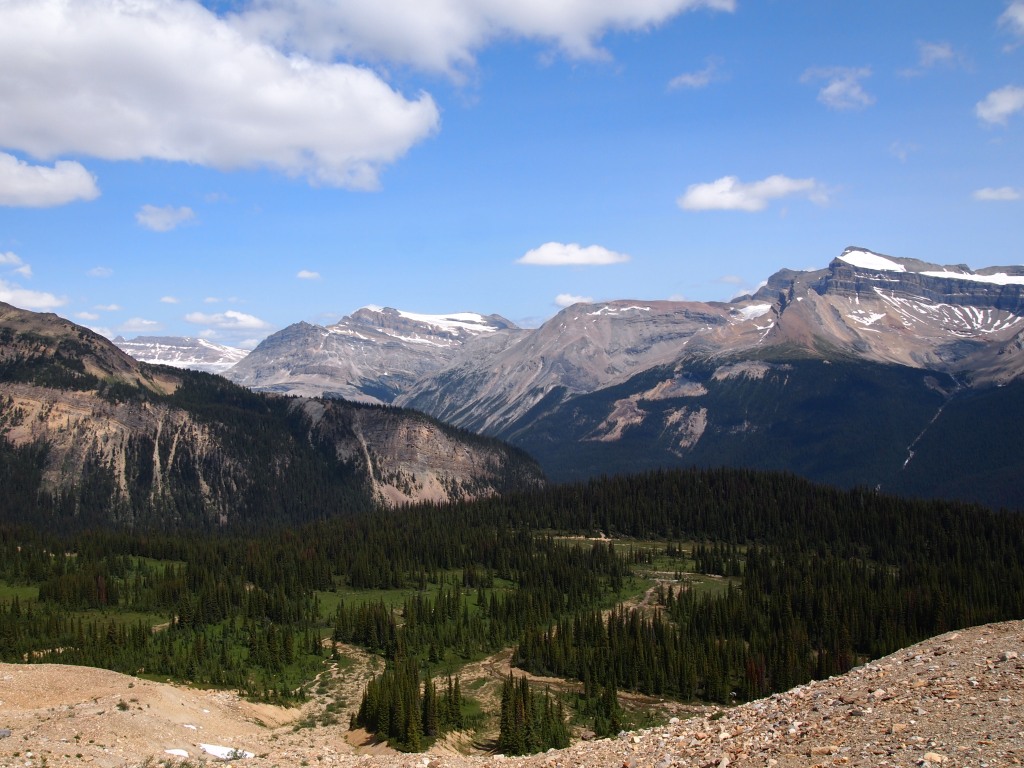 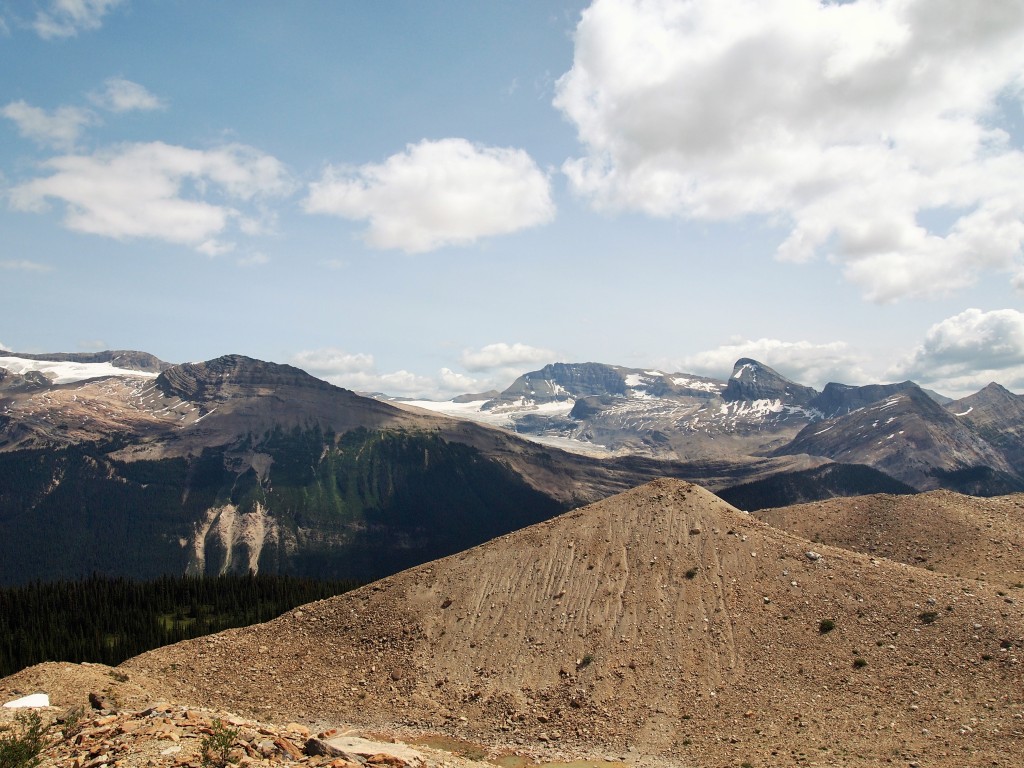 There were many more people at the junction when we returned. We felt lucky that we had been able to enjoy so much of the trail alone. We cut off the trail and started toward Celeste Lake. It was a beautiful descent through sub-alpine forest and wildflower-strewn meadows. We reached Celeste Lake and continued toward the Little Yoho River, and then dropped down (quite steeply) to the Yoho Valley and Laughing Falls. From there, we followed the Yoho River back to Takakkaw Falls. We felt all 12 miles by the end. 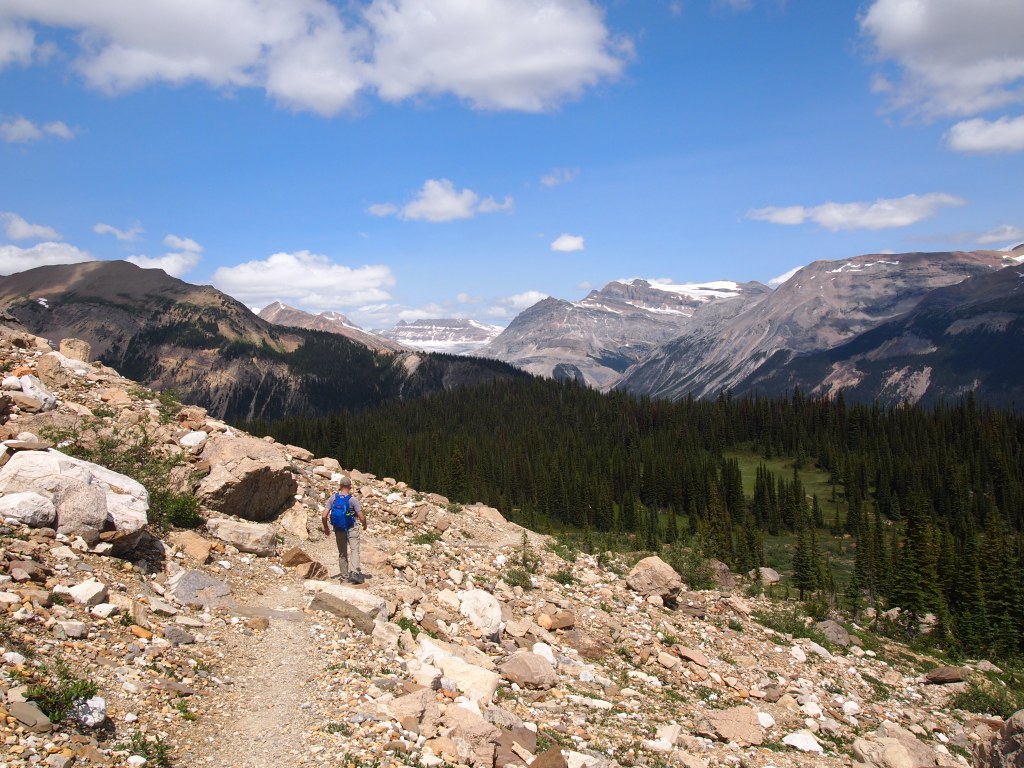 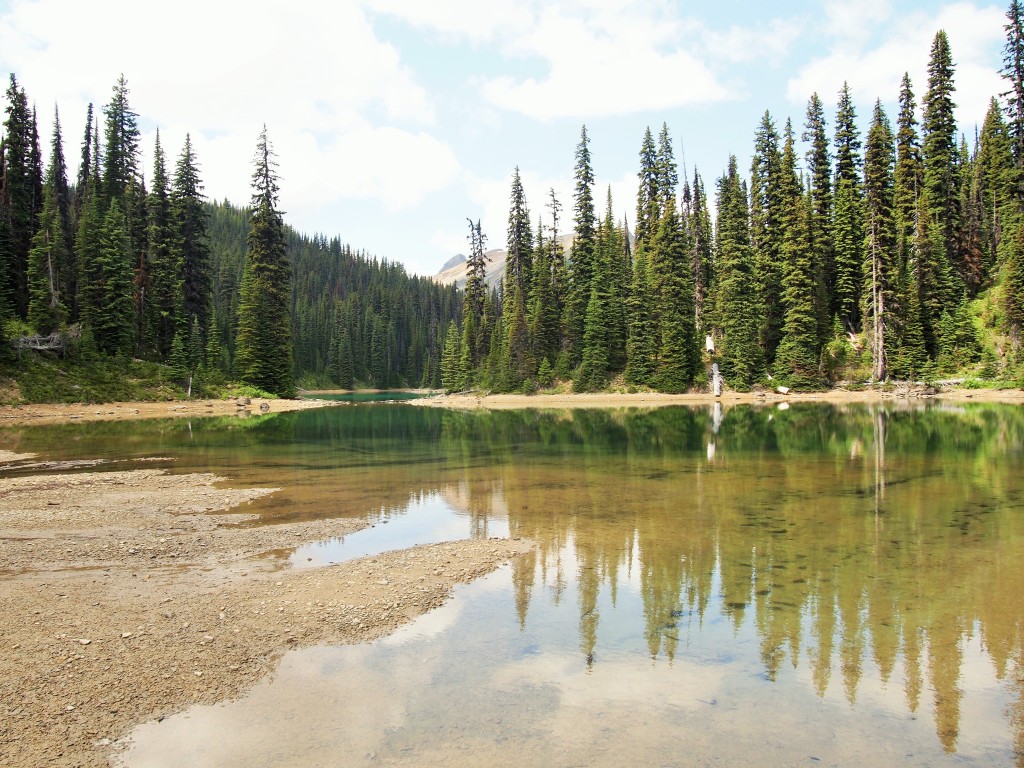 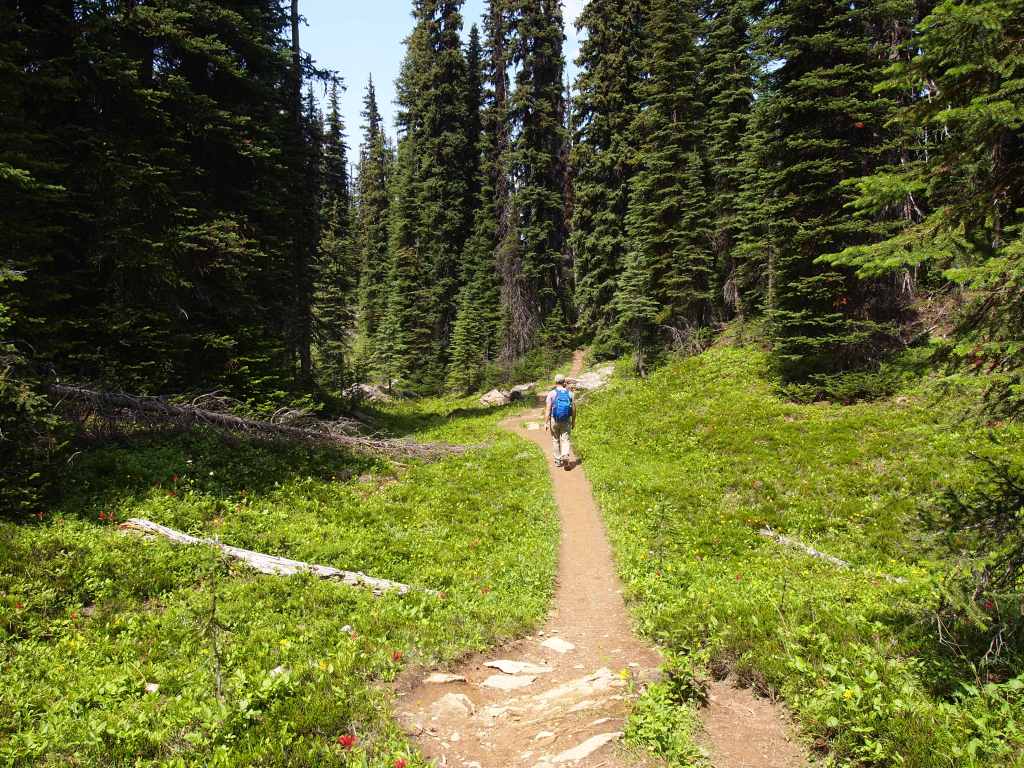 Getting closer to the end 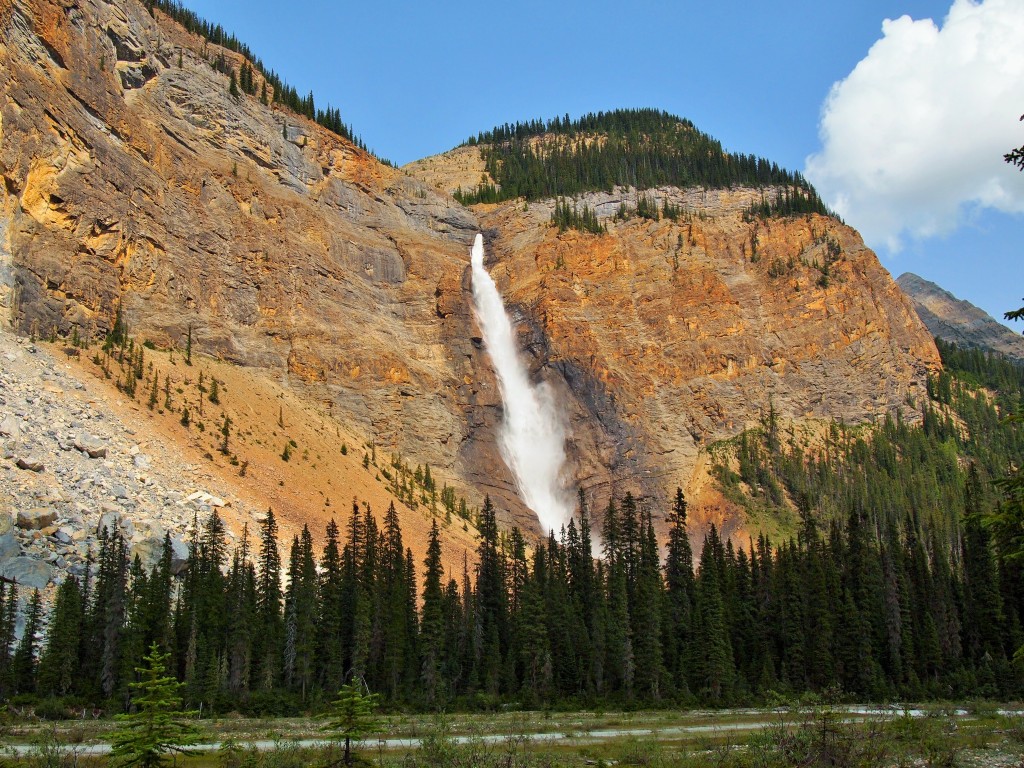 Exhausted, we were ready for a more relaxing endeavor. We left the Yoho Valley and drove to Emerald Lake. When we arrived, it was early evening and most of the day-tripping crowds had left. We easily found a parking spot in the lot. You can rent canoes or you use your own as long as you fill out a form certifying that you clean your craft after each use and identifying where you used it previously. We pumped up our kayaks, grabbed a couple tall boys, and walked the short distance to the shore. Then we set off for a tranquil paddle around Emerald Lake.

Initially, there were a smattering of other canoes on the lake, but while we were out the canoe rental closed and we were the only ones left on the lake. It was so damn nice. It was the perfect way to wind down after our extraordinary hike and enjoy a different side of Yoho NP. Plus, it was a great end to our tour of Canadian National Parks. 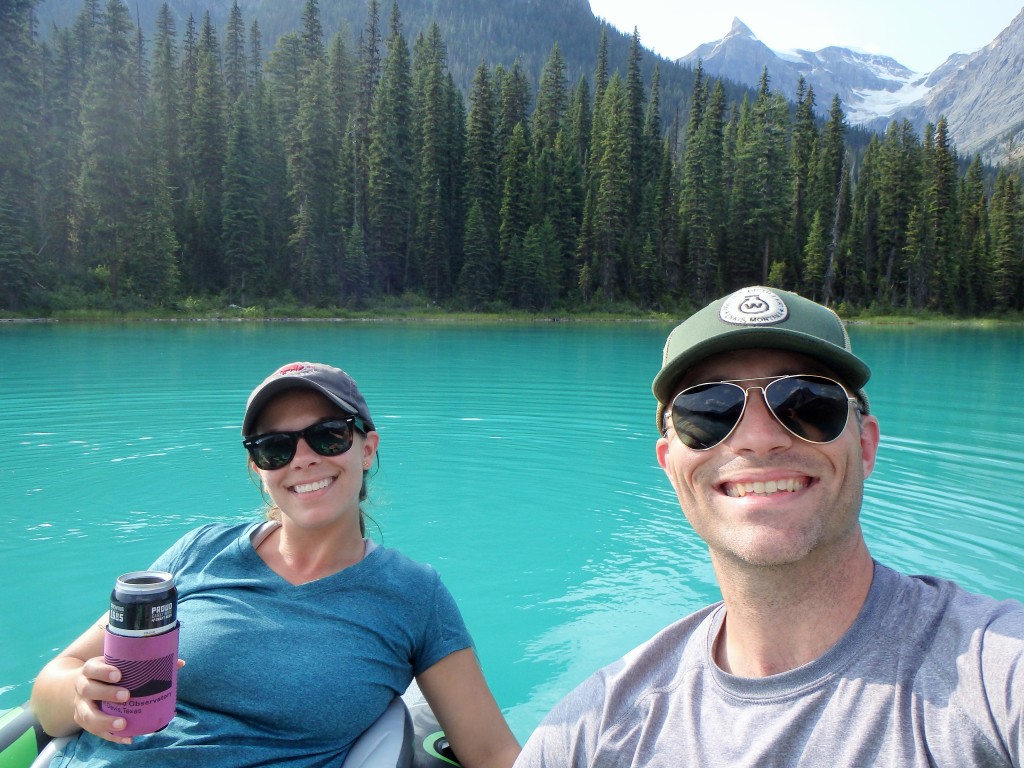 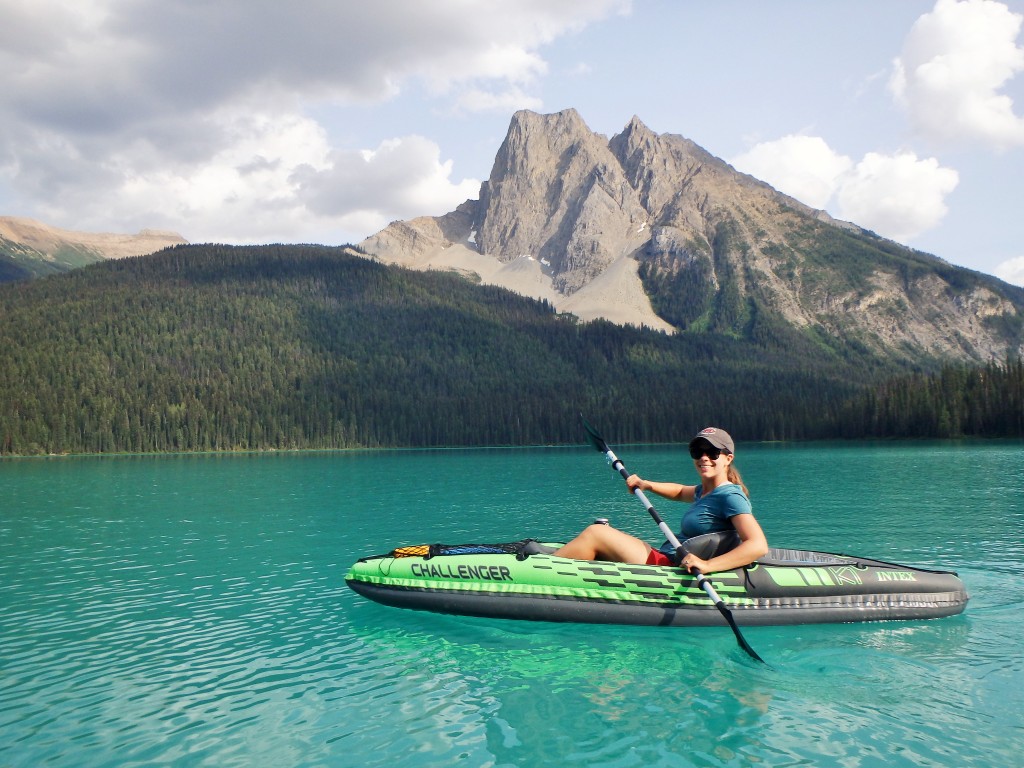 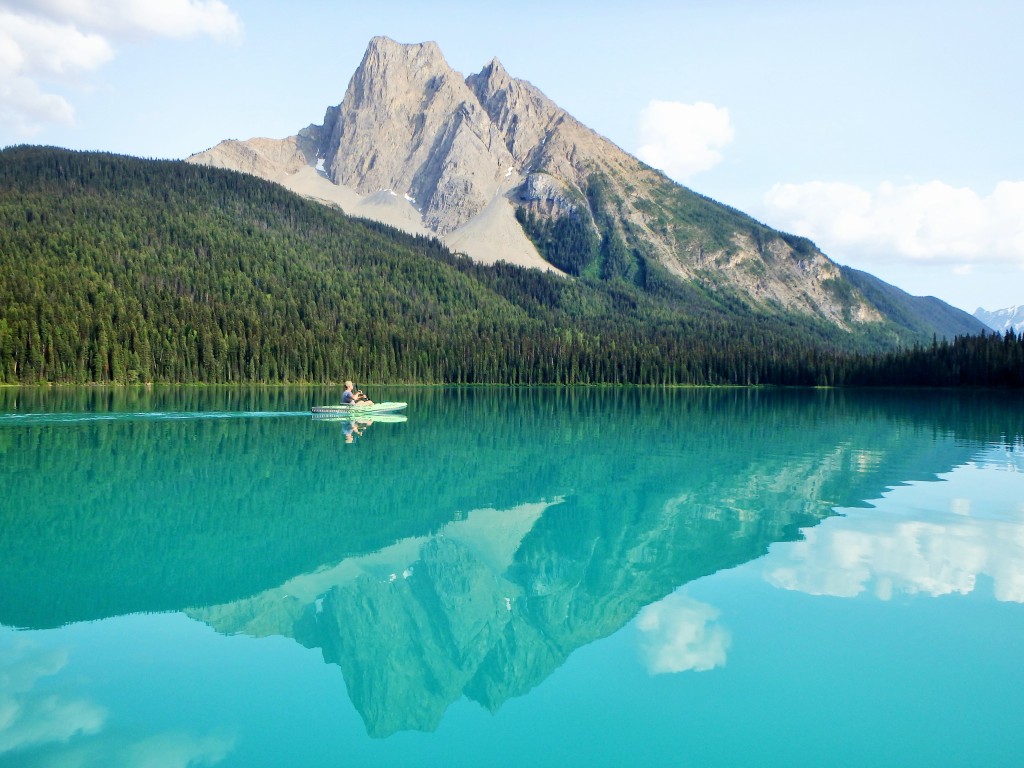