Friday morning was Stephanie’s final day at her internship in Montpellier so we left around 8am with plans to meet her around 1pm for a trip to the beach. There aren’t too many places open that early in the morning so we took advantage of the crisp, cool morning and did a little sightseeing before the gobs of people began to stir.

The main plaza, Place de la Comedie, is absolutely breathtaking, especially when the soft morning light casts its glow over the city. The fountain in the center, The Three Graces, is one of my favorite in Europe. The statue appears to be rising out of the earth, its base being moss-covered boulders. A gilded carousel to the side adds to the magic of the square. We walked down Charles de Gualle Esplanade past the Pavilion Populaire (the current exhibition entitled “Un Reve Americain” or “The American Dream”) and the Jardin Champs-de-Mars. It’s a peaceful, tree-lined stroll, especially so early in the morning. We eventually settled into McDonalds – yeah, yeah, it’s one of few places with advertised wifi – and did some research on Montpellier. Montpellier is a simple city to navigate, it’s easy to wander aimlessly and not get lost. Since wandering around is our specialty that’s exactly what we did. We stumbled upon a music store with a nice collection of records so we skimmed through them for a bit. We walked away with a Texas Country album, featuring Lone Star beer cans and Willie Nelson on the cover. 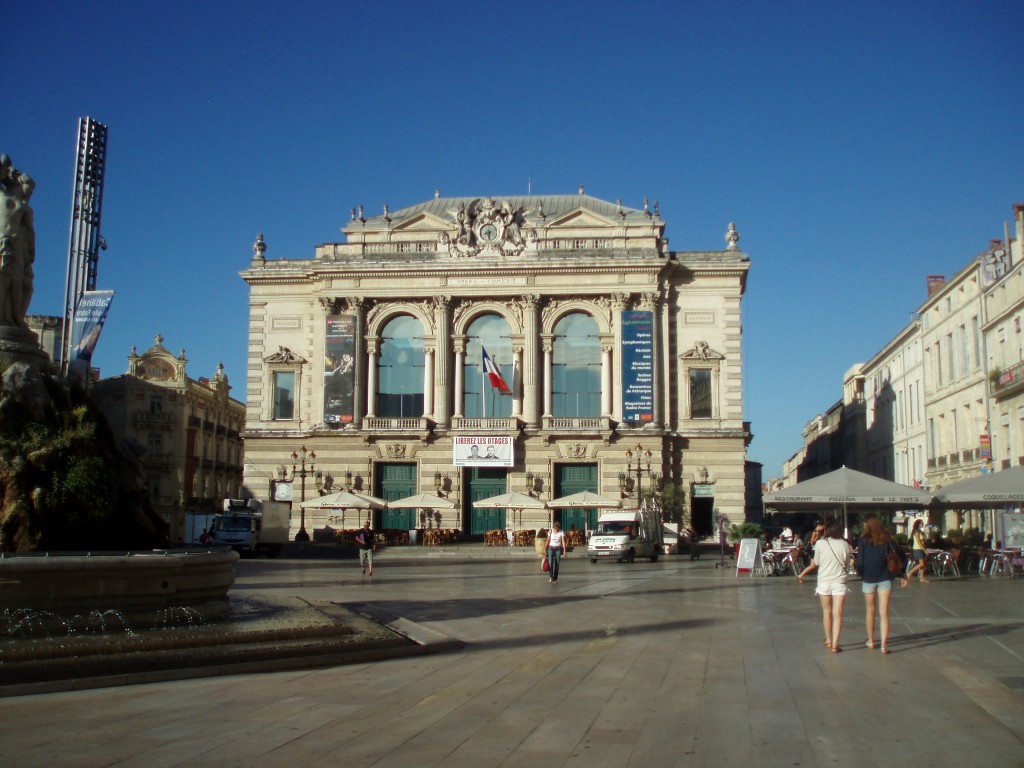 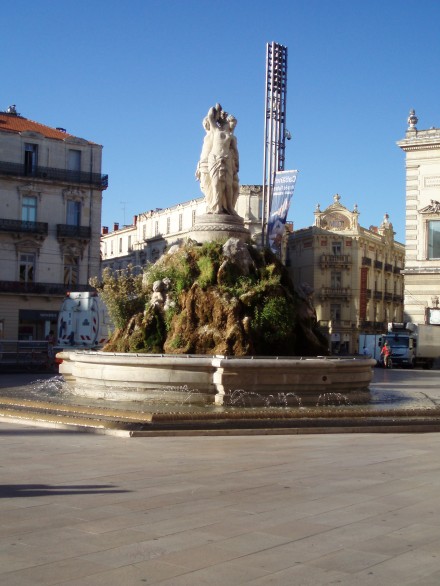 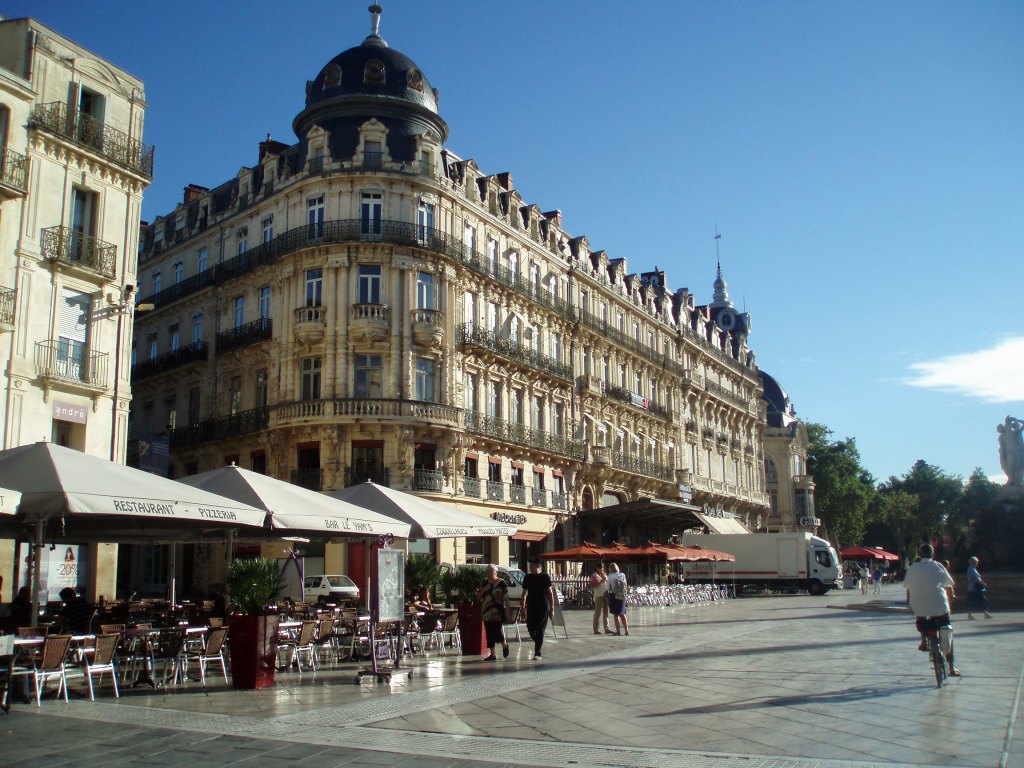 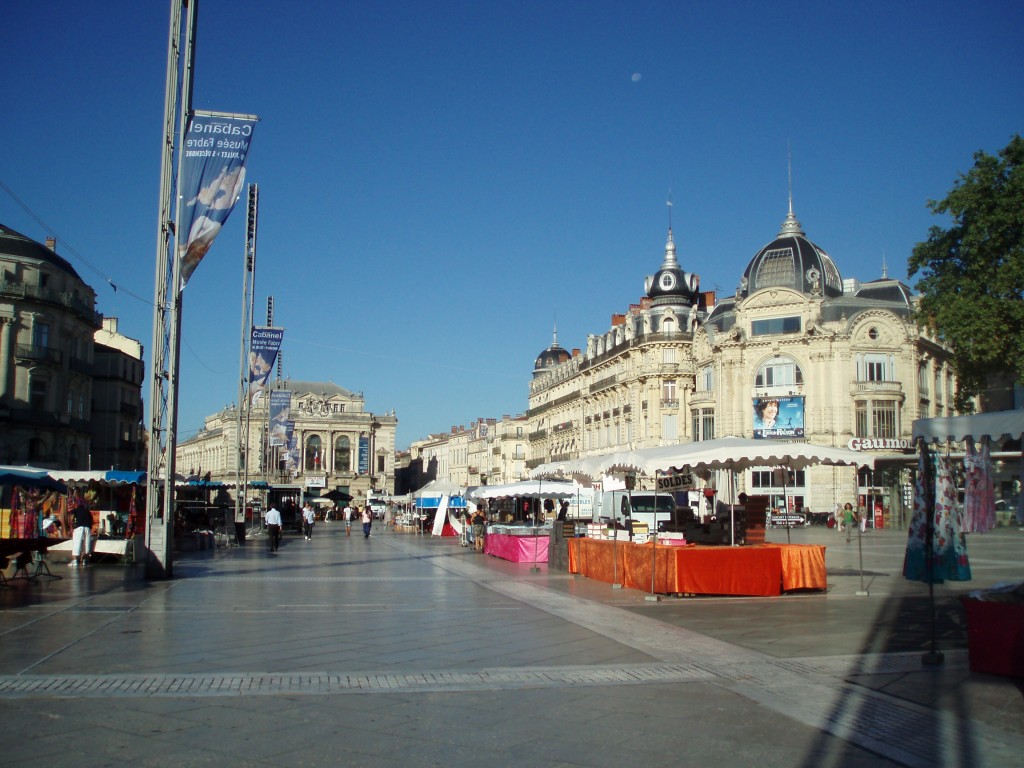 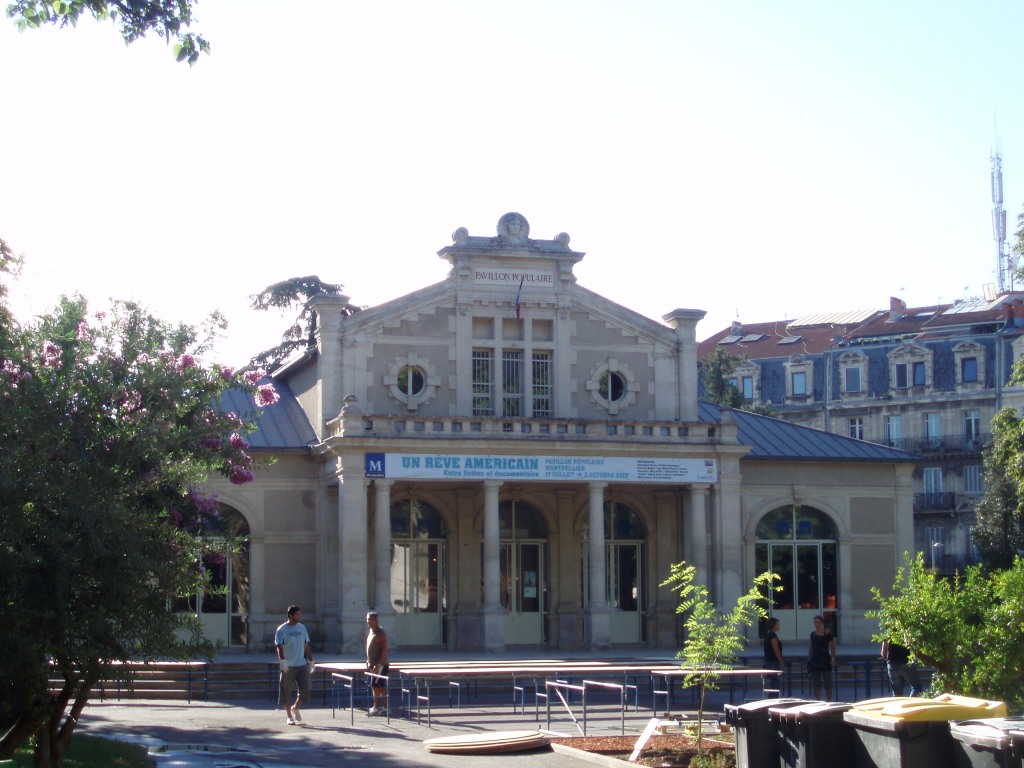 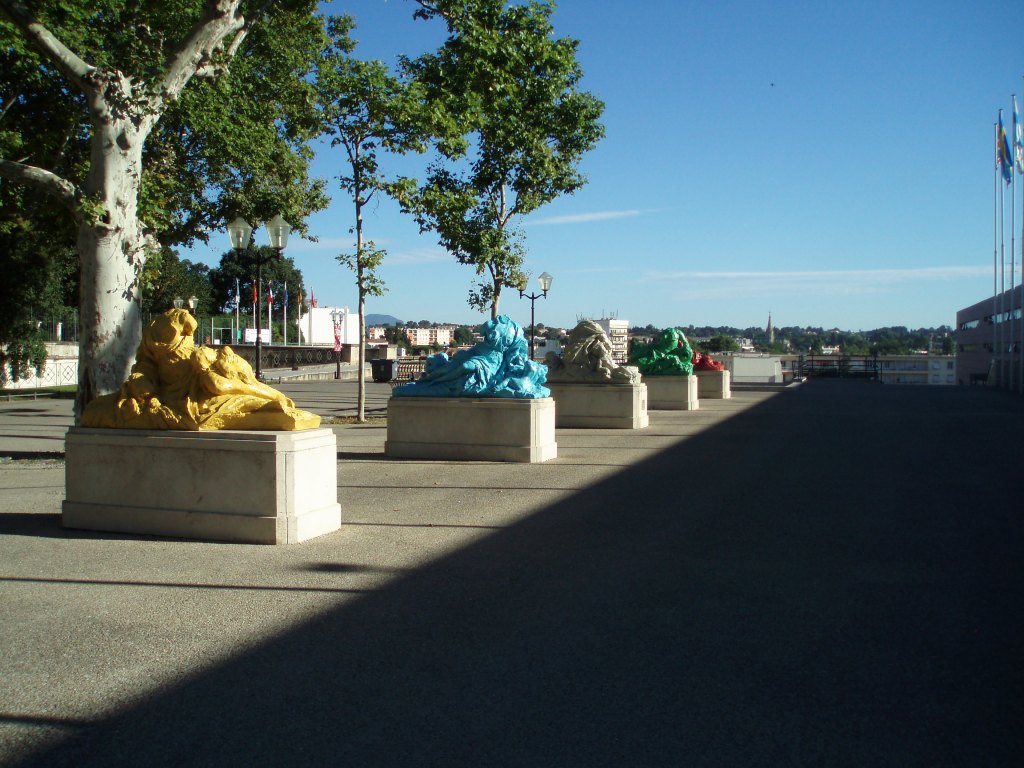 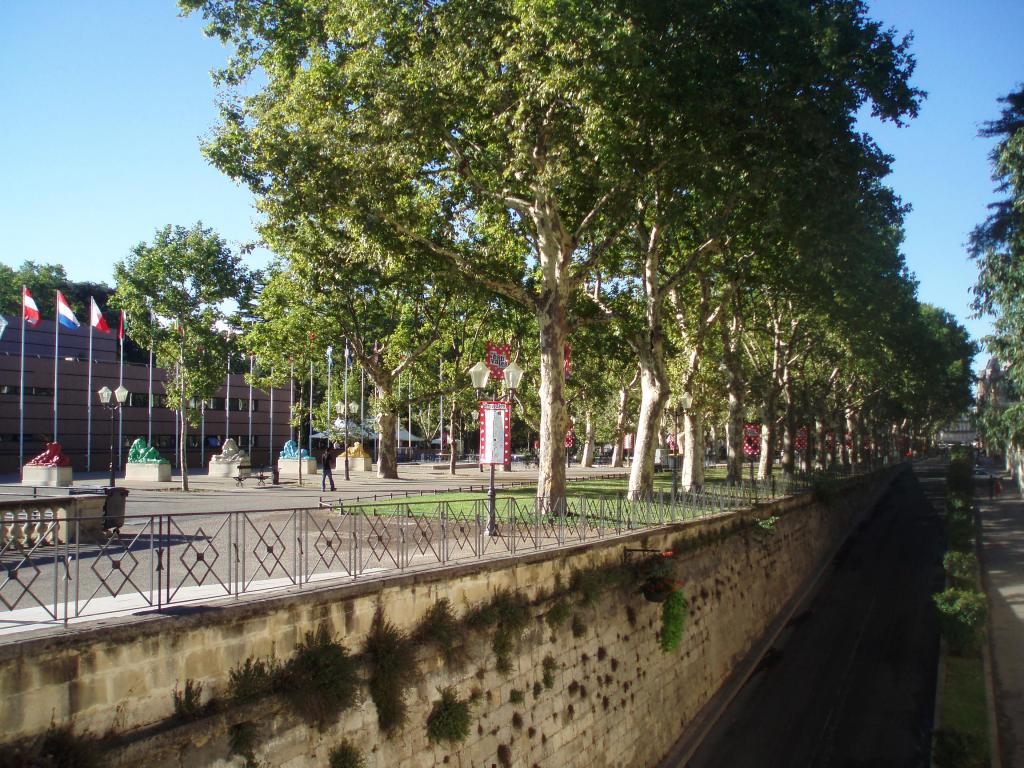 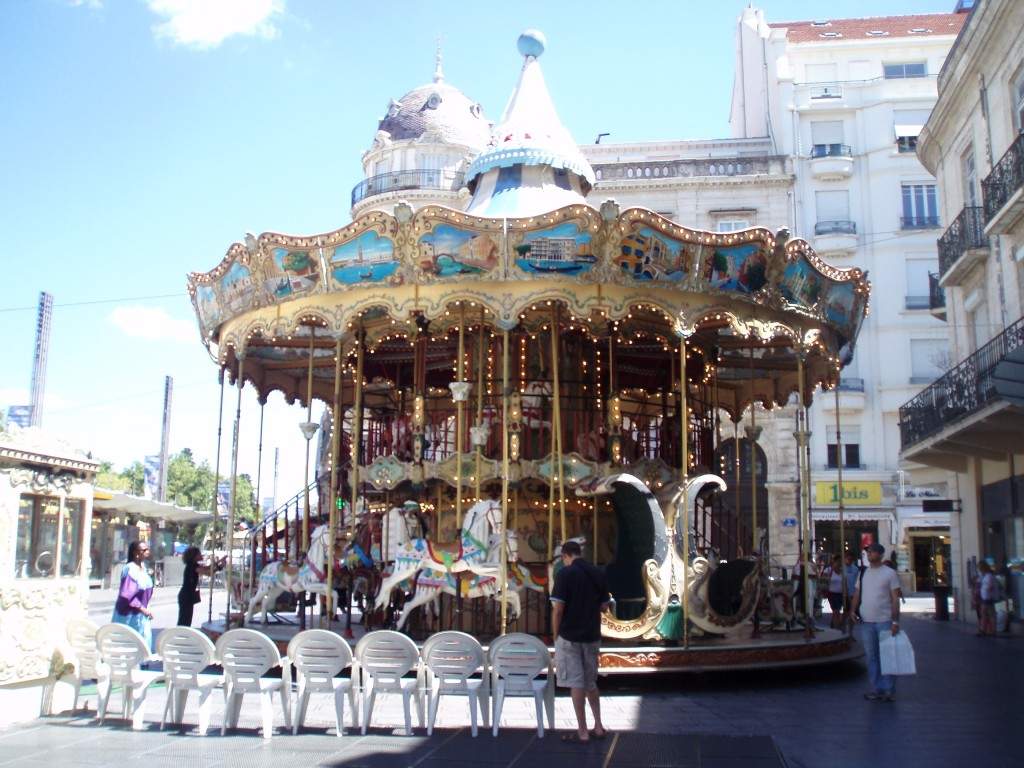 We met Stephanie at her place around 1:30pm to change and go to the beach. We caught a bus on the other side of town and 3 Euros and 25 minutes later we were in Palavas. We got off at the first stop to avoid the most crowded parts of the beach, but it didn’t turn out to be very crowded after all. It was our first sand beach all summer! The weather was great – hot enough to get cooled down in the water and breezy enough to allow long bouts of reading. It was my first time in the Mediterranean and it was COLD! After a while my body adjusted and the water actually felt pretty nice. We stayed out there for a few hours before heading back into Montpellier to shower and get ready for the festival that evening. 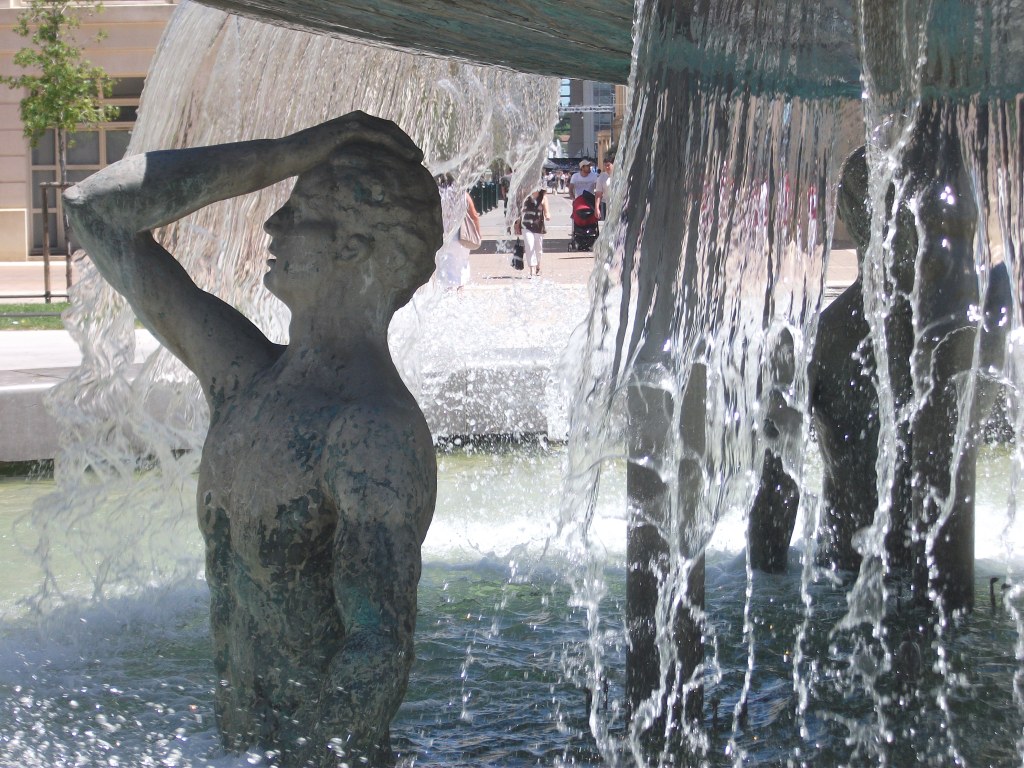 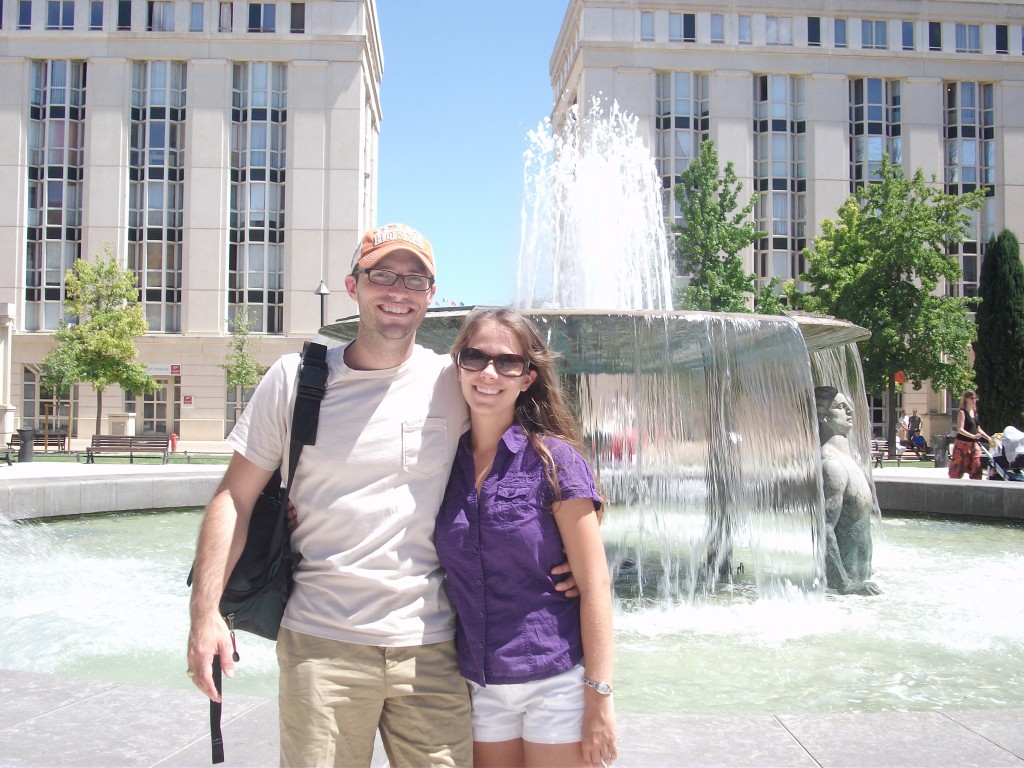 On our way to the beach! 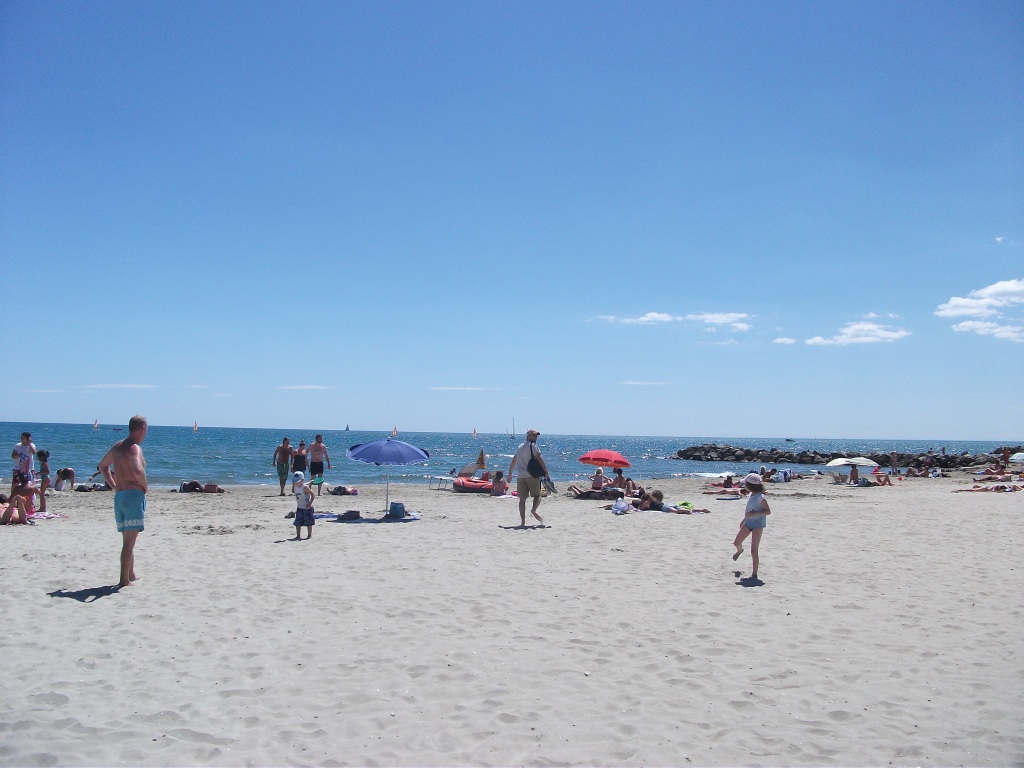 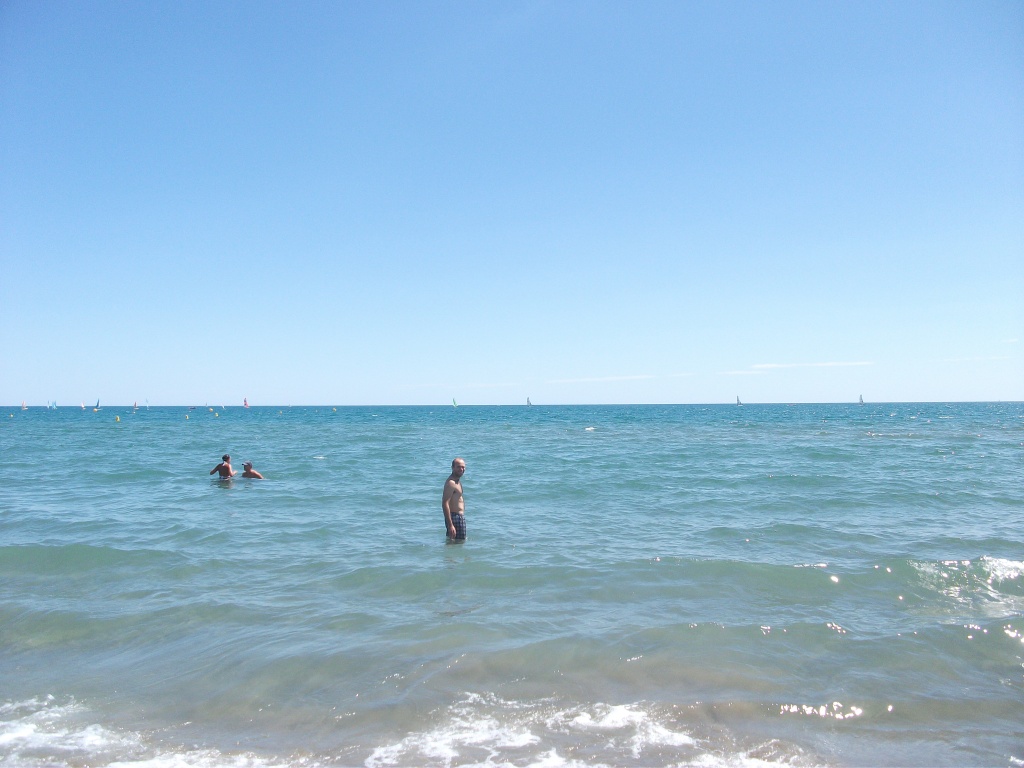 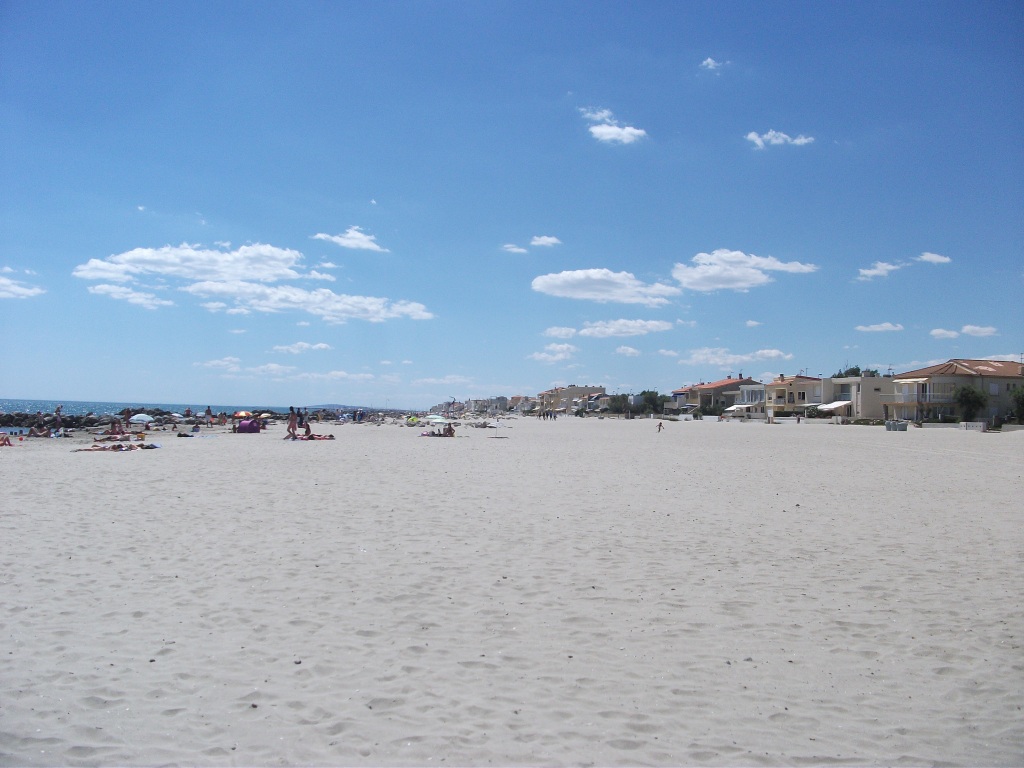 Les Estivales de Montpellier occurs every Friday night in July and August. Venders from the Languedoc-Roussillon region bring food, art, jewelry, wine, and other goods to sell at the festival. It spans the entire Charles de Gualle Esplanade. 4 Euros gets you a wine glass and 3 tickets – each ticket good for a wine “fill-up.” I was ecstatic. We met Stephanie around 8:30pm at the Pavilion Populaire – which is where all of the couchsurfers (hosts and surfers) in Montpellier were meeting. We bought our glasses and toasted the evening with our first glass of wine. Zach and I walked around a while looking at all of the booths. I eventually caved and bought some earrings from a Peruvian man and Zach impulsively bought a new hat (which he really loves). Zach also bought some oysters, a local fare. We continued refilling our glasses as needed. Stephanie and I enjoyed our final glass so much that we decided to buy a bottle to continue our merriment – it was only 7 Euros! Eventually the couchsurfing group expanded and re-located to the park. We were chatting with Stephanie when she introduced us to Nam, a native of Montpellier, who currently resides in Paris, but will soon move to New York City. We started talking to him about New York, our travels, and Montpellier and he offered to take Stephanie, Zach, and myself out into the countryside on Saturday to picnic and swim. We eagerly accepted his offer and made plans for the following morning. Around 1 or 1:30am the group started to break up and so we slowly sauntered back to Stephanie’s where the night ended with a trumpet serenade. 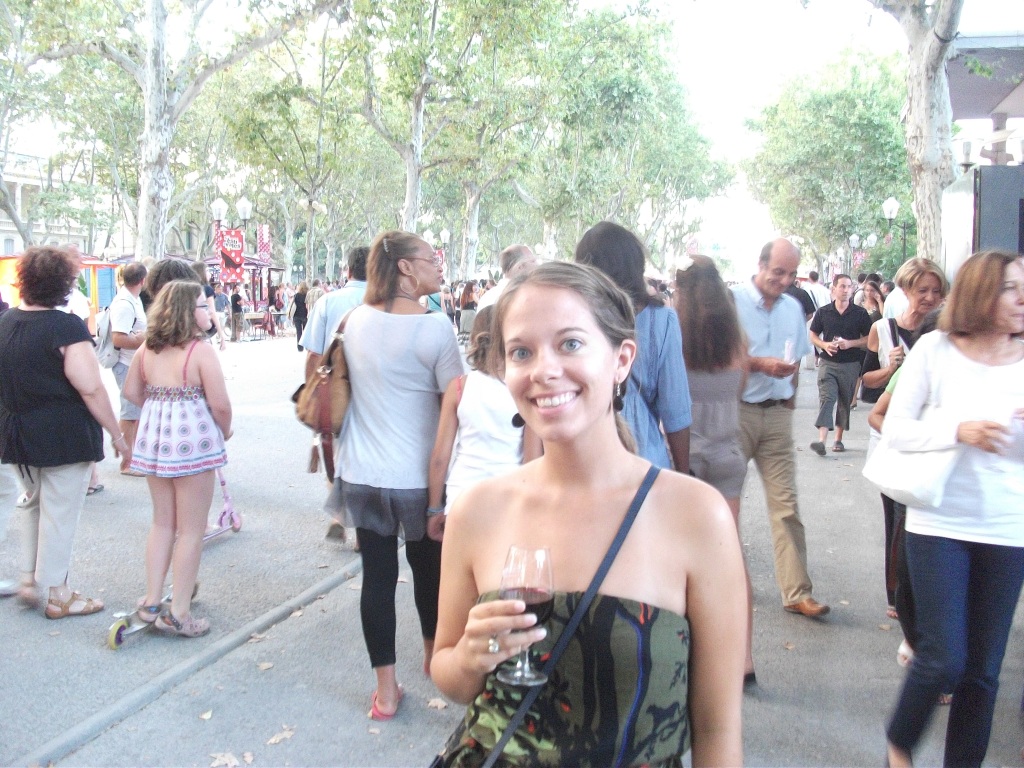 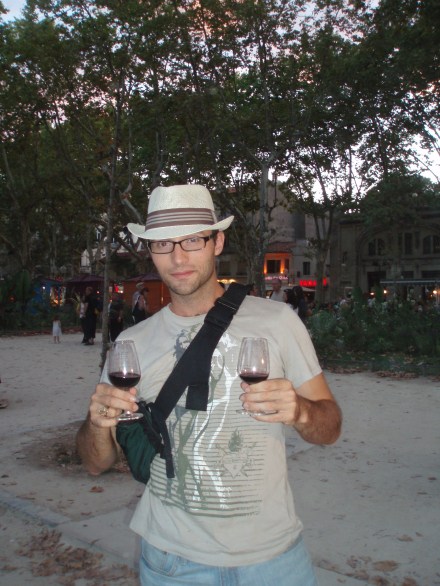 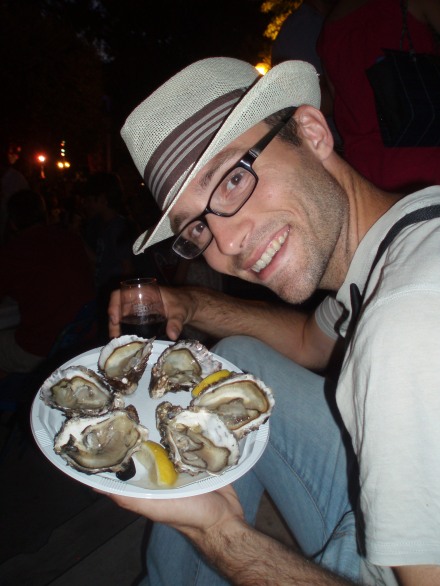 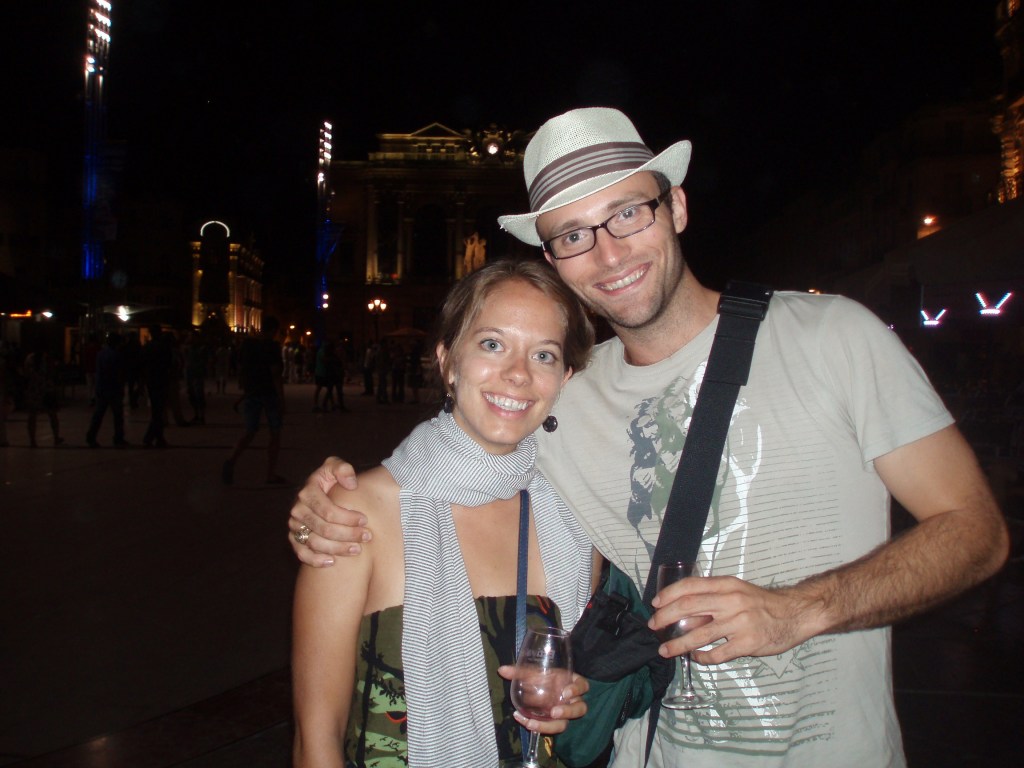