Alright, today is the day I am going to catch the blog up. Lisbon was a whirlwind but now we are in quiet Coimbra so I can get some writing done.

On Friday we got up pretty early (8:30am) to get ourselves to the center of town to get on a train for Sintra. Sintra is about 30 minutes outside of Lisbon and reminded Zach and I of Sapa in Vietnam. It’s a little escape from the city to a higher elevation – cooler temperatures, castles, an adorable city center, and tons of shopping. I highly recommend going for a day if not staying for a night. 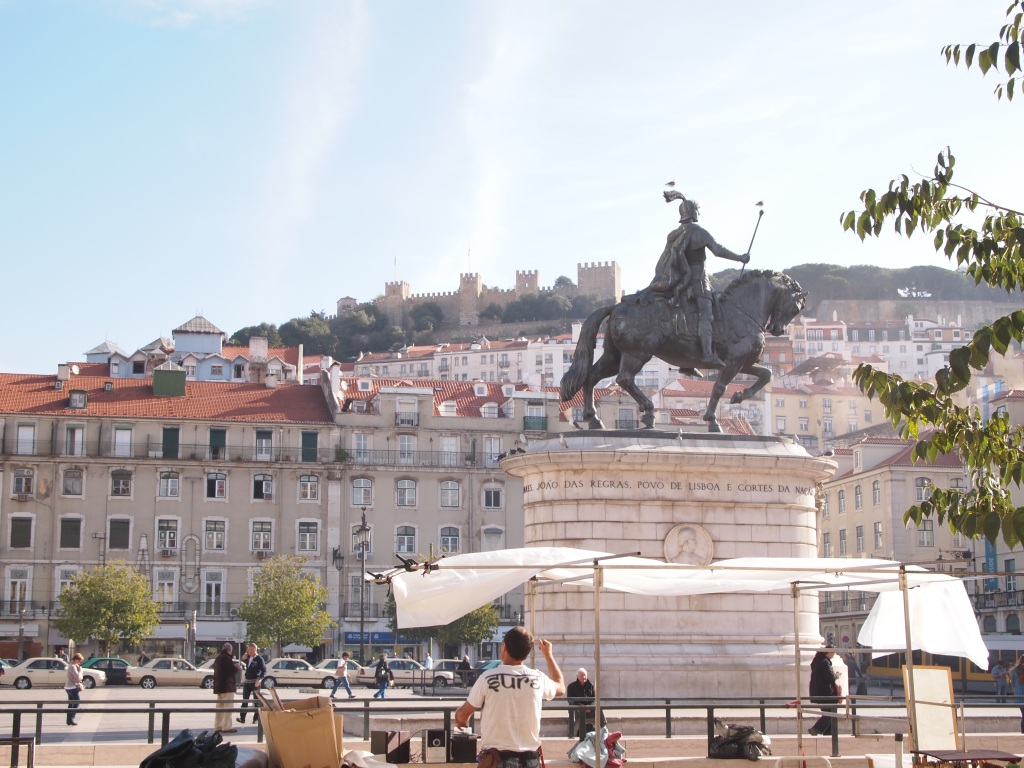 Dry salted cod – it’s one of the worst smells 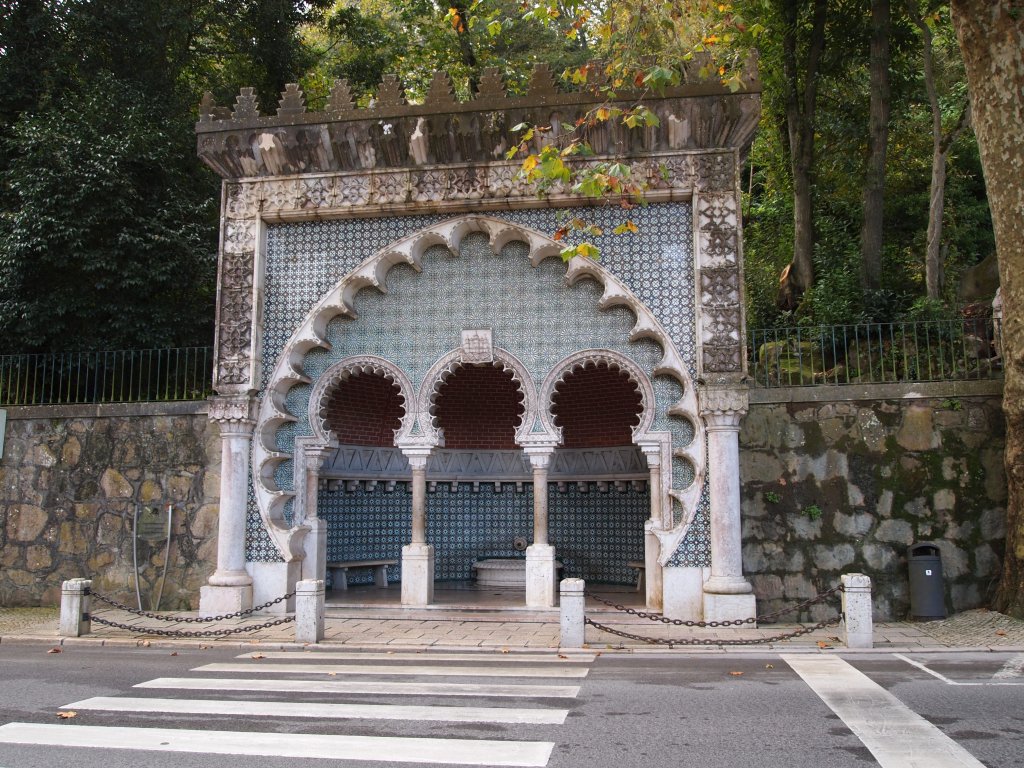 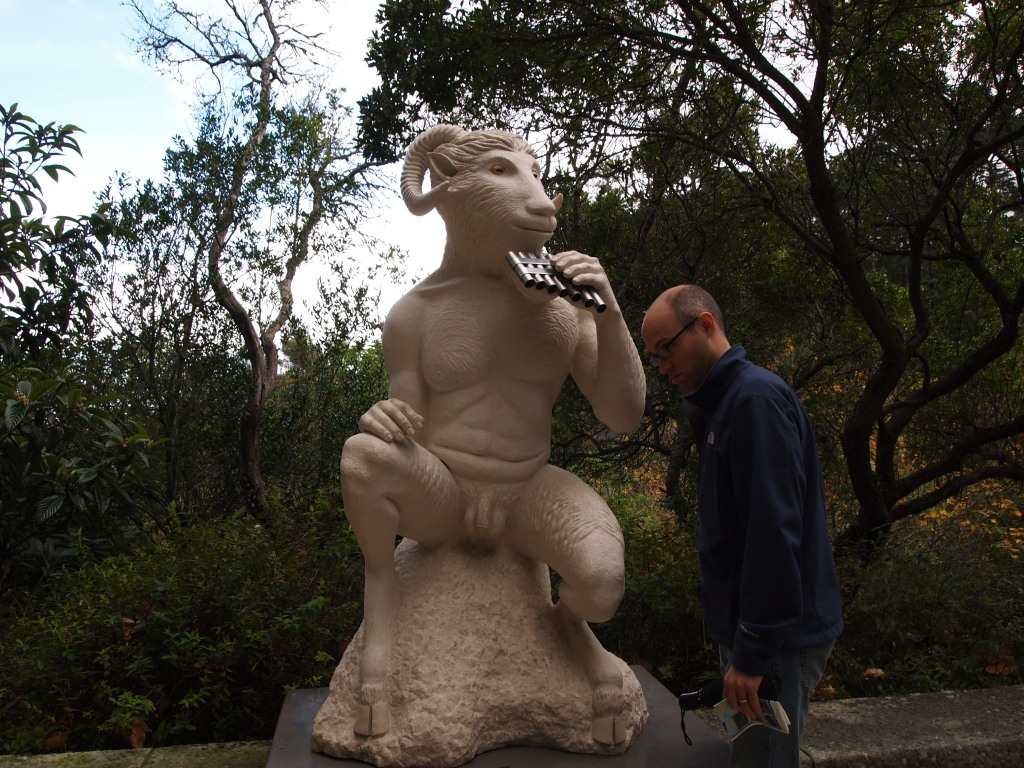 What a creepy statue!!!

Sintra’s main draw is several palaces – some grace the mountain tops overlooking the city and others are scattered in between. In all there are six so if you take the time to stay a couple of days in Sintra you could certainly see all of them – though I’ve found that seeing so many castles (or churches) at once can become extremely dull. Since we were only doing a day trip we chose one castle – Palacio Nacional da Pena. If you Google Sintra, this palace is the main image that pops up and as soon as I saw it, I knew that’s the castle I wanted to visit! 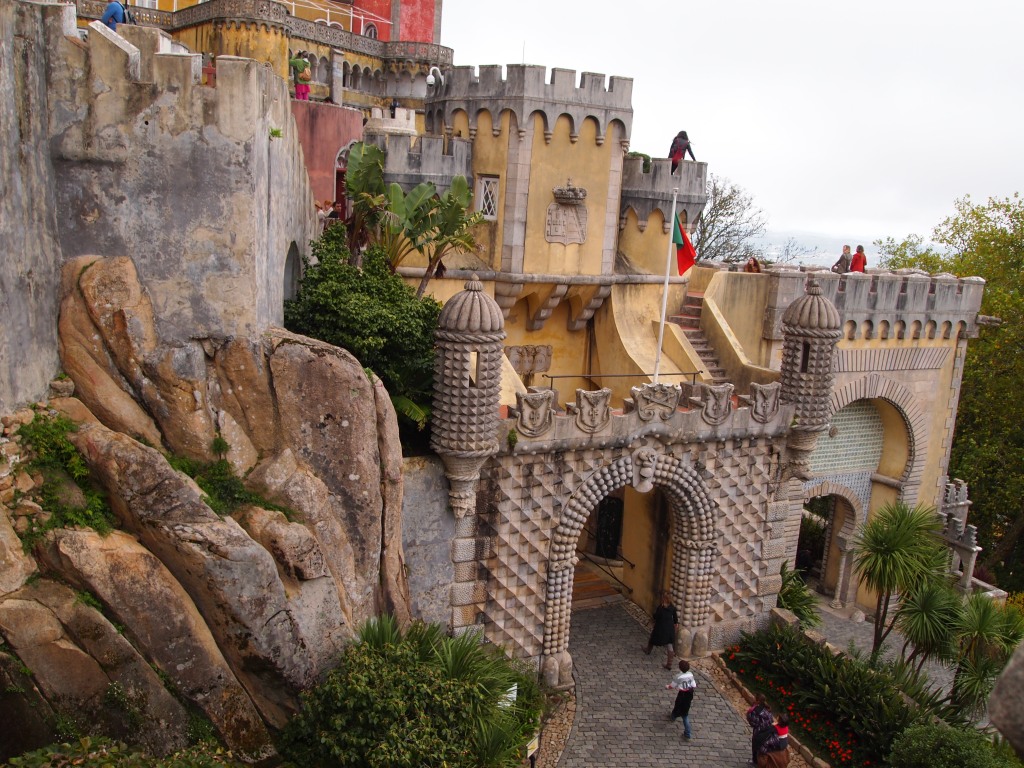 At first glance, it’s whimsical and dream-like. It’s the type of castle I’d always imagined without ever knowing it. It’s several different colors – red, yellow, purple – and it’s comprised of several different shapes. It’s just not your typical castle. Pena is the highest castle in Sintra, in fact, it’s not visible from the town. It sits at the top of a mountain surrounded by a beautiful forest. And the easiest way to get there is by bus or car. However, since we had read that it was a nice walk we decided to forgo the transportation and hike up ourselves. BAD IDEA! I guess we must have missed the trail or maybe the trail doesn’t begin until you’re closer to the castle, whichever way, we definitely did it wrong. We grabbed a couple of ham and cheese sandwiches to go and then began walking up the mountain. I think it probably took us 45min-1hr to get up to the park entrance – not even the palace!! The walk was nice at first, but it was very steep and allllll up hill. Neither one of us brought our hiking shoes, so there was that. Plus due to the cooler climate we both were wearing jackets, which of course, we eventually shed as we worked our way up the mountain.

We decided to hike to Pena National Palace… 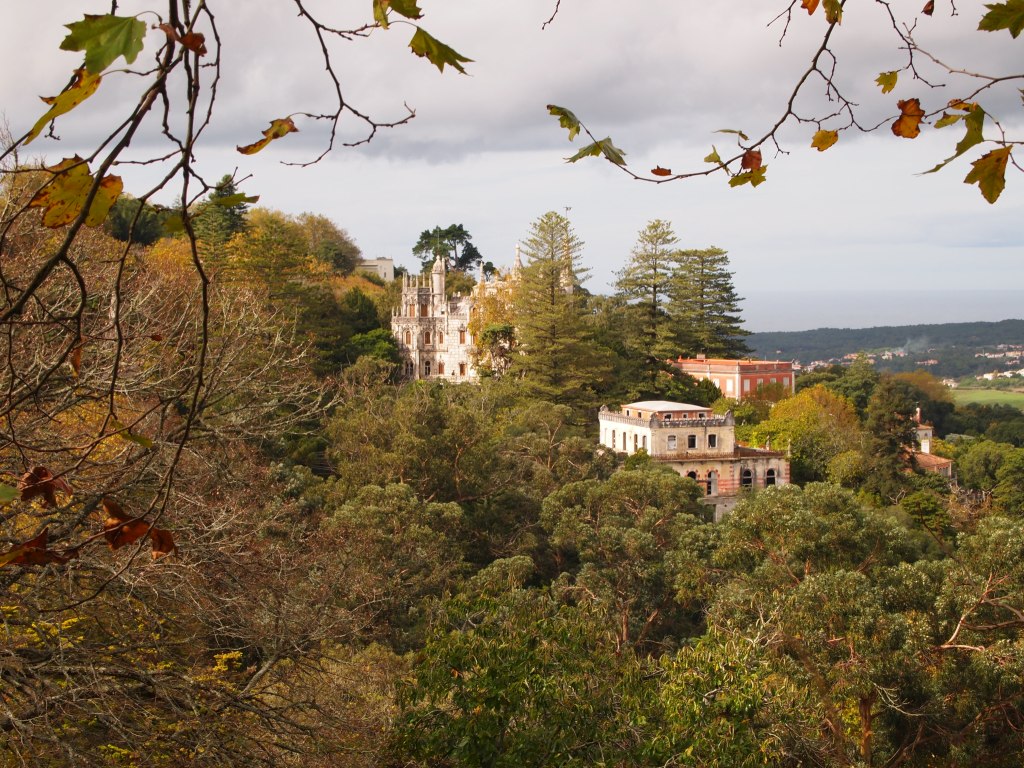 We can see a glimpse of it!

Once we reached the parking area and the park gate, we bought tickets for the palace and the park surrounding it. Then it was an additional 30 minute hike through the forest to the palace itself. The forest was absolutely beautiful, but I will say it had less of an effect on us since we were exhausted from our incredibly long and steep hike up there.

Inside the Pena Park 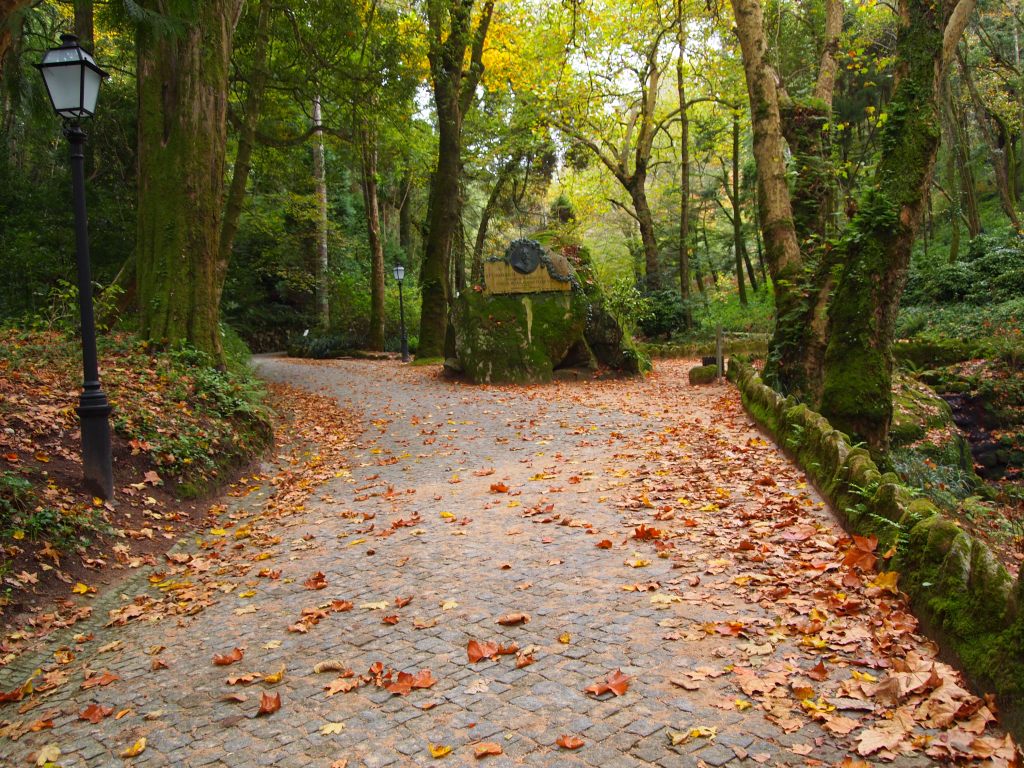 These are the same tiles that cover parts of the palace

Nonetheless, when we reached the palace, it was all worth it. Everything about it was exquisite. The detail was impressive. Everything was just absolutely amazing. From the outside it was beautiful – charming, expressive, and accessible. We could walk around the castle on the outer wall to get some great views of the city and the Moorish Castle below (Castelo des Mouros). We could see the Atlantic Ocean in the distance and back behind the castle the immense forest that surrounded us. There were some 3 dimensional azulejos on the interior of the archway and a gigantic, terrifying sea-monster/gremlin type creature graced the front of the arch. Although in photos it looks like the castle is painted purple, that entire area is actually covered in some gorgeous azulejos tiles (photo above). 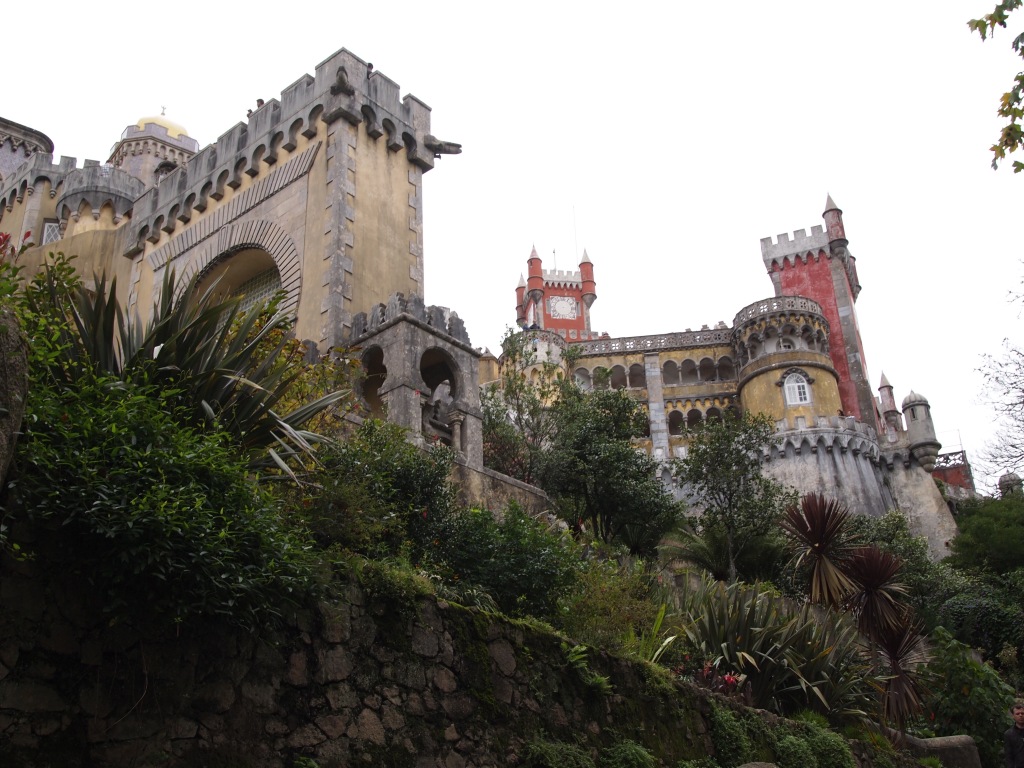 View from the palace walls – it’s the Atlantic!

The Moorish Castle from Pena 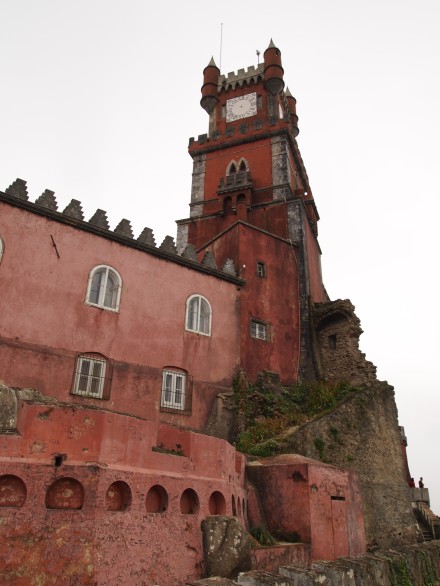 Once we were finished searching the exterior we went inside. I was really hoping the interior wouldn’t let me down, since the exterior is so amazing, and it blew me away. We couldn’t take any photos unfortunately, but I’m sure google has some images of the interior. The interior really pushed me over the edge in awe. It was gorgeous. Virtually every room was covered head to toe in azulejos. None of the rooms were very large or covered in gold leaf like many other castles we’ve toured. This one was simple in nature. Each room served its purpose, was filled with beautiful furniture and knick knacks, but the azulejos were what really set it apart. The azulejos are the reason I think Pena National Palace is the prettiest palace I’ve ever toured. It was stunning. Some of the rooms lacking azulejos had beautiful murals painted on the walls – the murals weren’t colored, but in muted tones like gray. I wish I could have taken some photos – the interior was really spectacular.

As we left the palace fog was beginning to roll in around us. In lieu of walking, we took a trolley down to the parking area and took the city bus back into town. Then we perused the town a bit- had some tea and pastries, did quite a bit of shopping, and then walked back to the train station to go back into Lisbon. We bought some beautiful azulejos tiles for ourselves – though you can find new ones EVERYWHERE, we found some that were 40-80 years old. Every now and then you can find some really old tiles – we saw some from the 16th century. Upon our return to Lisbon – it was raining – we walked back to our apt. to rest up before our last night.

Fog rolling in over the Moorish Castle

On Thursday night we had failed to catch some fado (fadoo) at a place in the Bairro Alto. Luckily the particular place we wanted to go to – Tosca do Chico – had another location right across from our apt. in the Alfama. So we headed over there after a quick bite of pizza and settled in at the bar to finally hear some fado. Fado traditionally involves 3 things – a guitar, a Portuguese guitar, and a fadista (fadishta). When it’s time for the set to begin, the lights are turned down, people stop talking, and it’s all about the music. We got to hear both a man and a woman sing and both were spectacular. I was a bit disappointed that so many people were taking photos during the set since the room was so dark the flashes continually illuminated what was supposed to be an intimate setting (I didn’t take any).

We sat through one set and during the break abandoned our seats at the bar to hike over to Ramiro!! Ramiro was another place that was on our “must eat” list, and I’m so glad we decided to go. It’s a little bit off the beaten path and not for tourists. It’s a locals place and we could tell as soon as we walked in that we were probably the only tourists there. Ramiro is open until 12:30am, so we were there closer to closing than maybe most tourists. We only waited for a moment before Ramiro himself seated us at a table on the far side of the restaurant.

Things at Ramiro move very quickly – literally. The waiters are constantly running through the restaurant. So if you aren’t ready to order the second he walks up, he’s gone again. It was pretty amusing for us – and maybe slightly intimidating. We were given an iPad with the menu so that we could make our seafood selection. We definitely could have gone wild and ordered so many things, but we wanted to keep our bill small so we ordered a couple of beers, the shrimp in garlic, and the clams in garlic. As expected everything arrived within minutes of our ordering it – first the clams, then the shrimp still sizzling in their pool of garlic and butter. AMAZING!!!!! All I can say is the next time we’re in Lisbon, we’ll be back and we’ll eat everything on the menu. 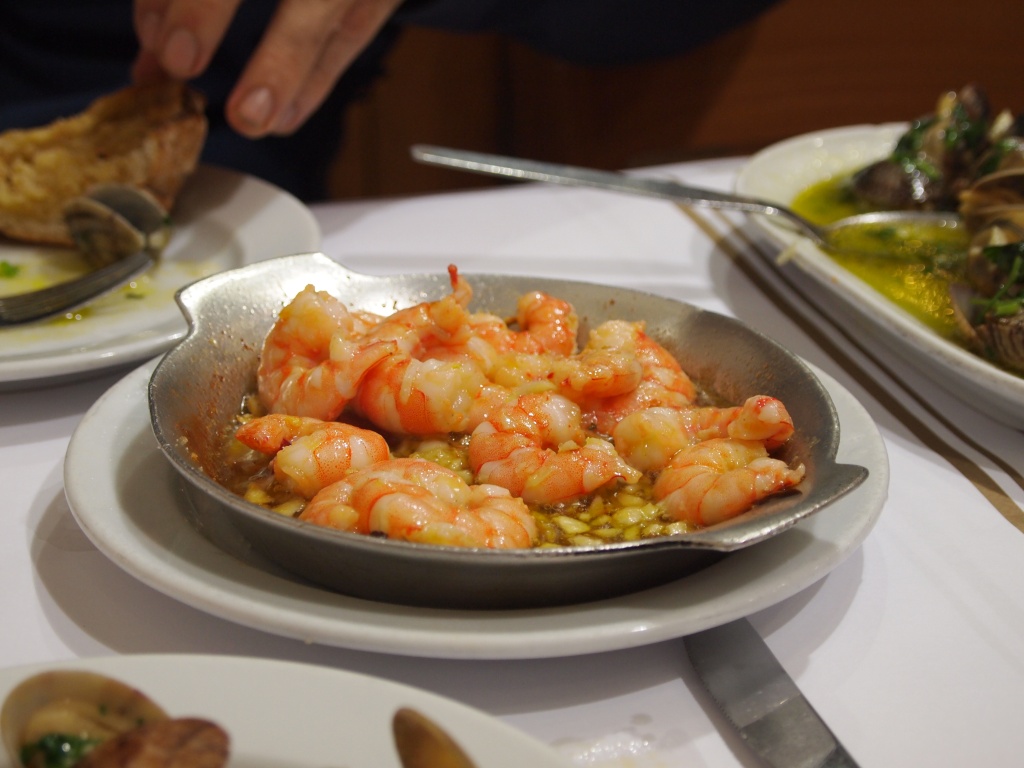 After Ramiro we happily trudged back to our apt. in the Alfama to get some well-deserved rest.