By the time we left, showered, and made it to bed we all probably got only 4 hours of sleep before we had to be up on Sunday. We were up at 7 and out the door around 7:35. We walked down, down, down to the bus office where we were picked up by minibus to be transported to the main bus station. Wow, what a mess! There was traffic continuously on the road in and out of the bus station. I didn’t see it let up one bit while we were there. There was a little confusion at first over whether or not we had missed our bus, but it turned out that it was late arriving. By the time we loaded up and left we were about 35 minutes behind our expected departure. The bus was nice and comfortable; there were tv sets in the back of each seat and Turkish tv for you to watch, we received tea and a snack at the beginning of the ride, and a few hours in we were given a nice rest at an auto stop (which was a collection of stores and one main area with a food court and toilets). 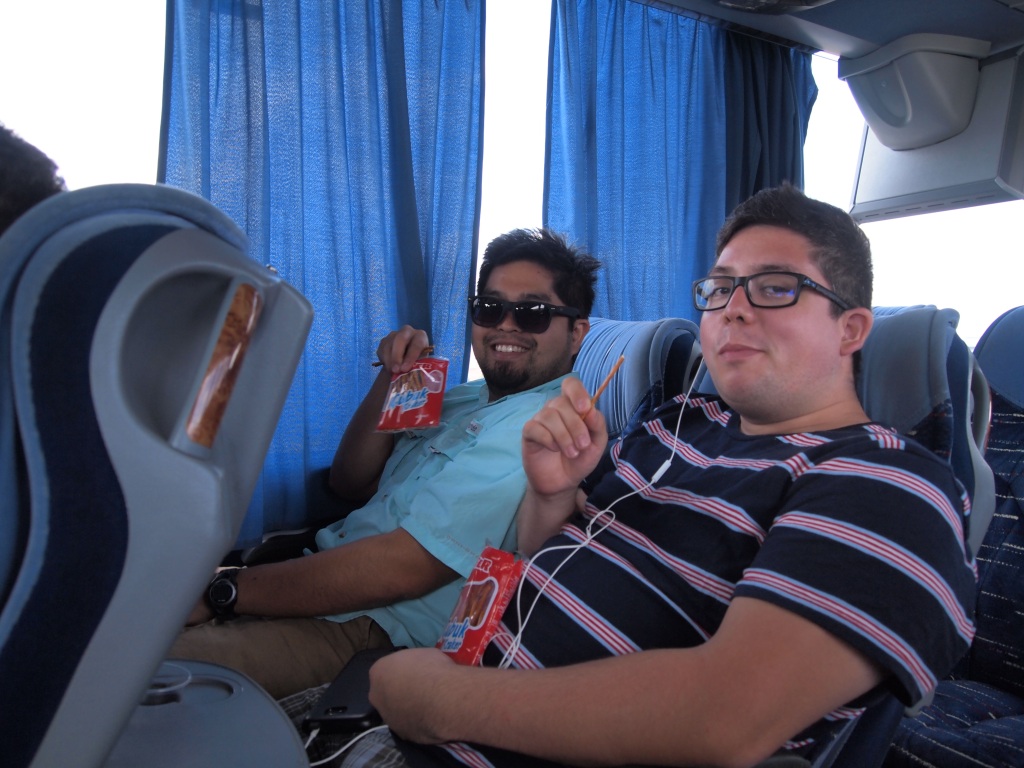 On the bus to Amasra

The trip took 7 hours. Tim and Rudy slept the majority of the way, Jenny slept a good amount, while Zach and I were the hold-outs. I watched as the scenery transitioned from rolling hills into beautiful pine forests and mountains. There wasn’t any evidence of commercial farming only small family farms with decent fields, cows grazing, and greenhouses set up. It was a pretty drive dotted with quaint mountain villages and sad, run-down towns. We arrived in Bartin, the stop prior to Amasra, and were the only tourists left on the bus. In addition to the five of us there were 3 older women – all Turkish. We became slightly concerned when at one point the bus turned in the opposite direction of the Amasra sign. We pulled into a gas station and were all instructed to get off the bus. I then noticed a minibus pull up. So we grabbed our things and loaded them into the minibus and set off toward Amasra at last. (If we had a better command of the Turkish language we would have known what was going on, as the crew made an announcement to all the passengers.)

The drive to Amasra was pretty. Once we left Bartin behind we quickly made the ascent into the mountains and were taken up and up twisting, often cliff-side roads. Finally we turned a corner and saw it: the Black Sea! Once we arrived in Amasra we gathered our things and walked into town. Since we didn’t have a map and Amasra is hardly mentioned in any of our guidebooks Zach tried asking a few people to direct us to our pensiyon. While the first couple of people we tried weren’t able to help we found one woman who was. She not only motioned us in the direction of the pensiyon, but walked us there.

Our pensiyon – Balkaya Pensiyon – is nice and clean. We’re paying TL100 each which is about $50 each for 2 nights – not bad! The owner is very friendly and speaks a little bit of English which helps. We are in the main area of town and are across from one of the town mosques. Incidentally that means that our rooms get an especially loud rendition of the call to prayer (although it hasn’t bothered us much). We were able to unload all of our things into our rooms and then explore a little bit.

The view from our room 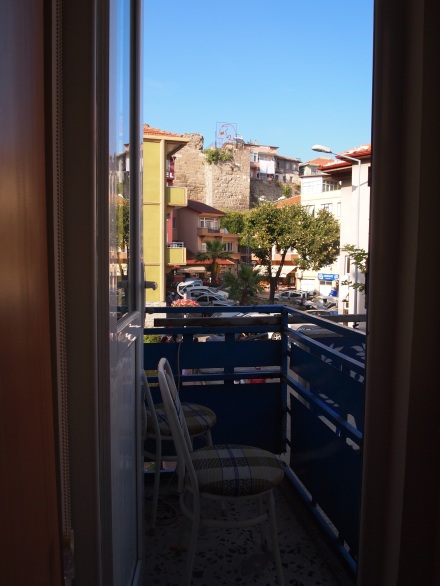 Amasra is basically a resort town on the beach so there are a lot of people here right now. It’s not especially crowded, but you can tell it’s the height of the season. There are two harbors in Amasra – a little one and a big one – and they’re on either side of the town. So we walked down by Büyük Liman (big harbor) and saw the boats docked to give tours, the food vendors selling corn on the cob and potatoes on a stick (they reminded me of Texas taters at the fair), and fresh fish. We took a walk through the small craft bazaar they have here and picked up a couple of things then decided to have dinner at Mustafa Amca’nin Yeri, a fish restaurant overlooking Küçük Liman (little harbor). The restaurant had a great view of the sunset over the harbor. We ordered up some scorpion fish, anchovies, sea bass, and white mail fish along with a nice bottle of wine. Dinner basically knocked us out though and afterwards we were all ready to crash. 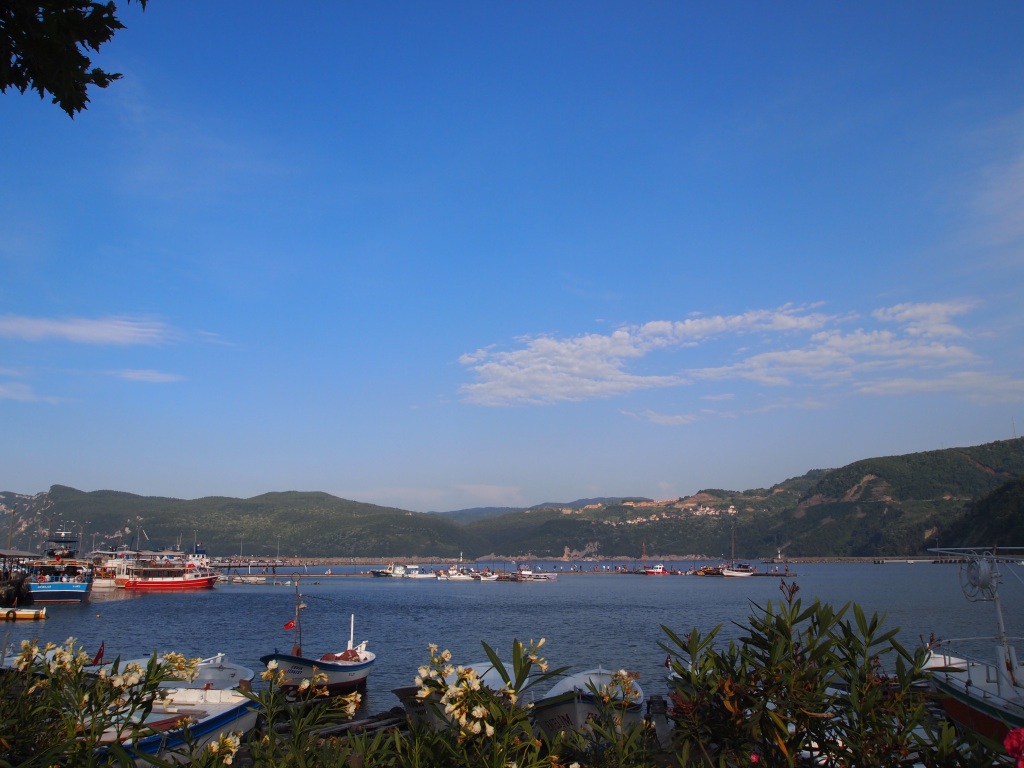 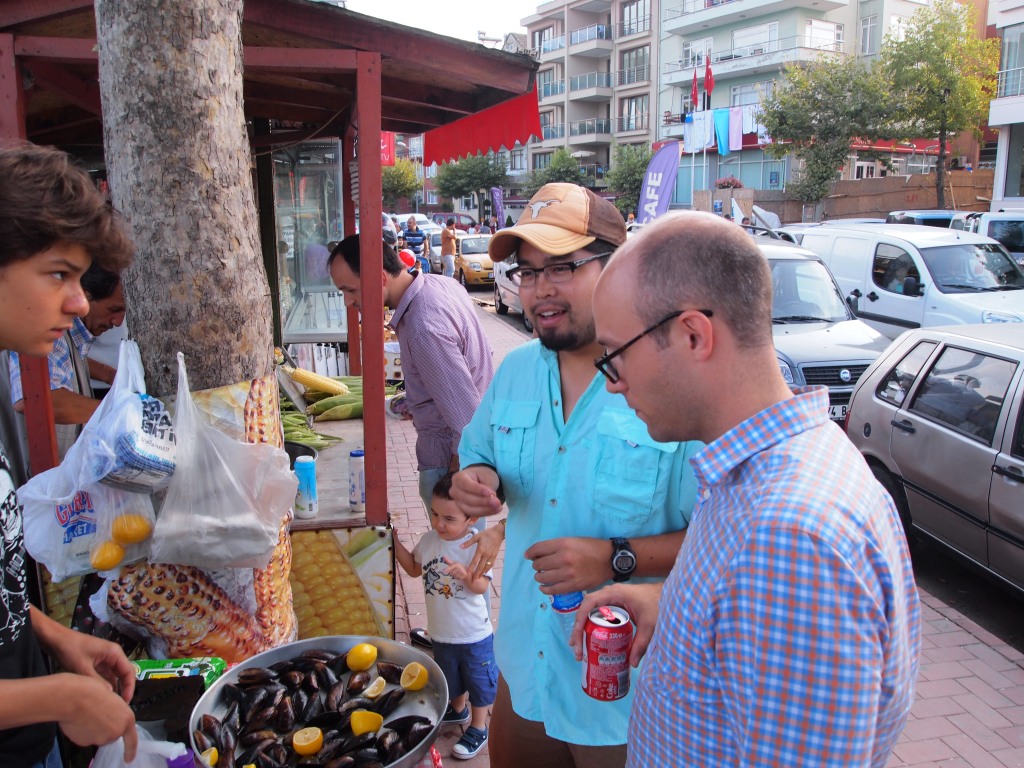 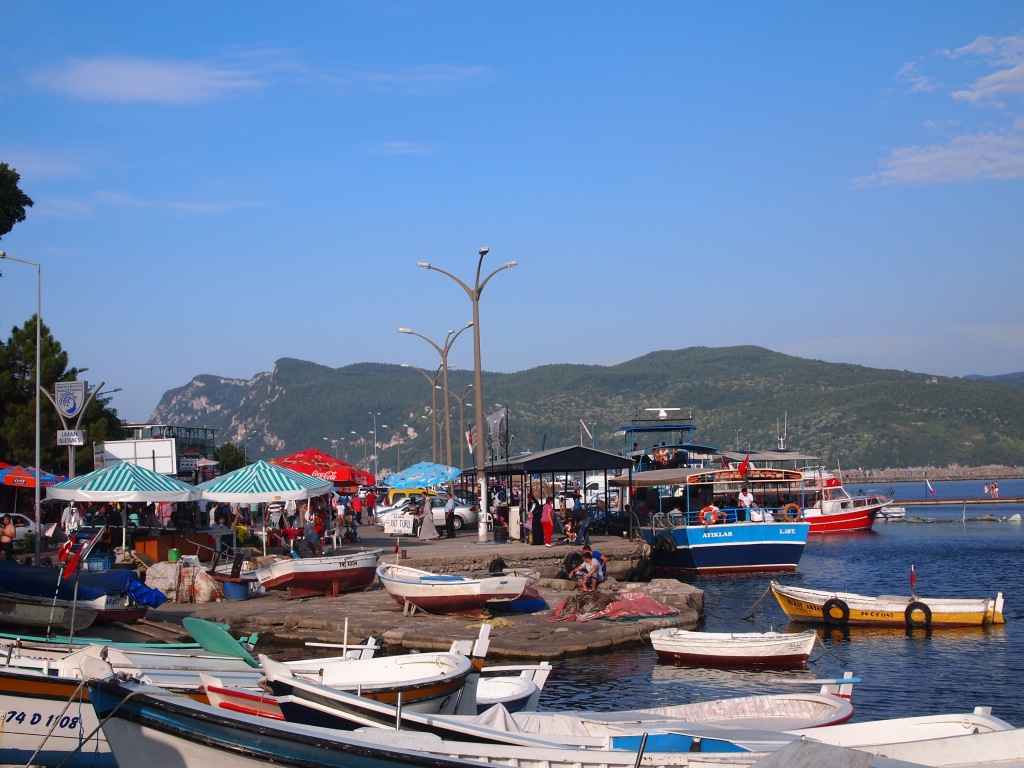 Tim dancing with a nearby vendor 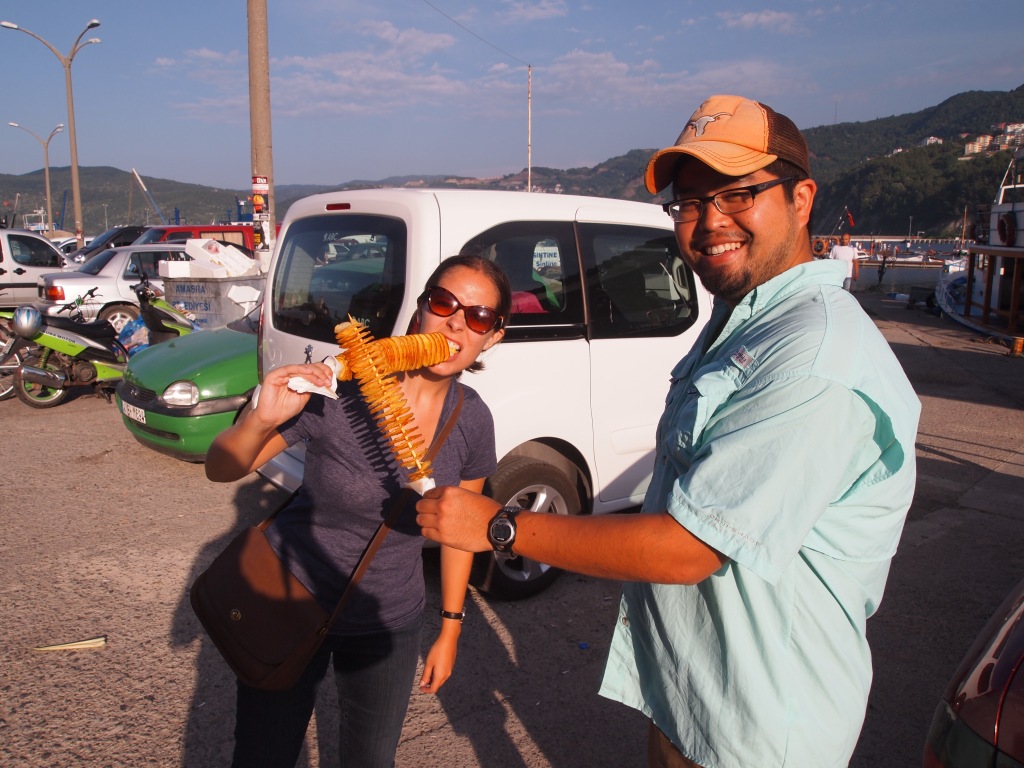 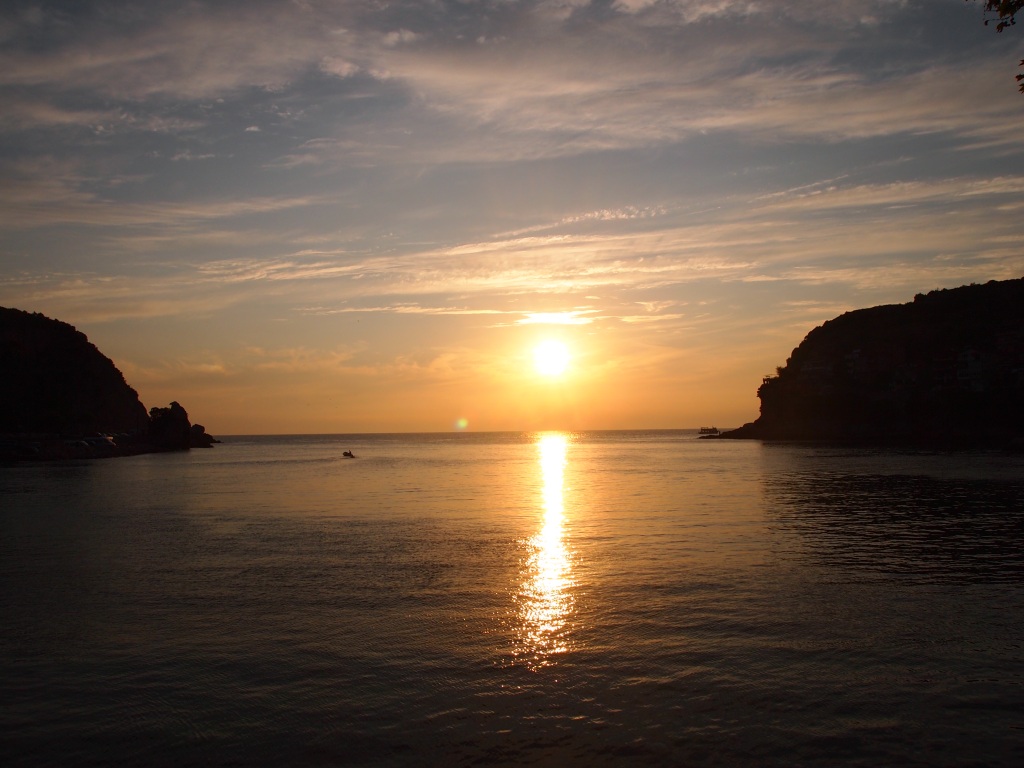 Today our plan was pretty simple: hang out at the beach.

Our pensiyon has breakfast arranged with a restaurant across the street and we were served olives, tomatoes, cucumbers, honey, cheese, bread, and a hard-boiled egg. After breakfast Zach, Jenny, and I wandered around a bit looking for the post office and inquiring about a boat tour. Then we rejoined Tim and Rudy to camp out at the beach on Küçük Liman. There are chaise lounge chairs provided along with umbrellas and an attendant from a restaurant above the beach to serve drinks, food, and aide with the chairs. We weren’t sure whether or not we needed to pay for the chairs, but he came over and set up our umbrella and cleaned off the chairs so I guess they were complimentary. We spent several hours there and it was wonderful. The breeze allowed you to sit around without needing to get in the water and the water was warm enough that if you got in it wasn’t too cold (once you acclimated!). It was a great way to unwind from the hustle of Istanbul and relax before our trip home. 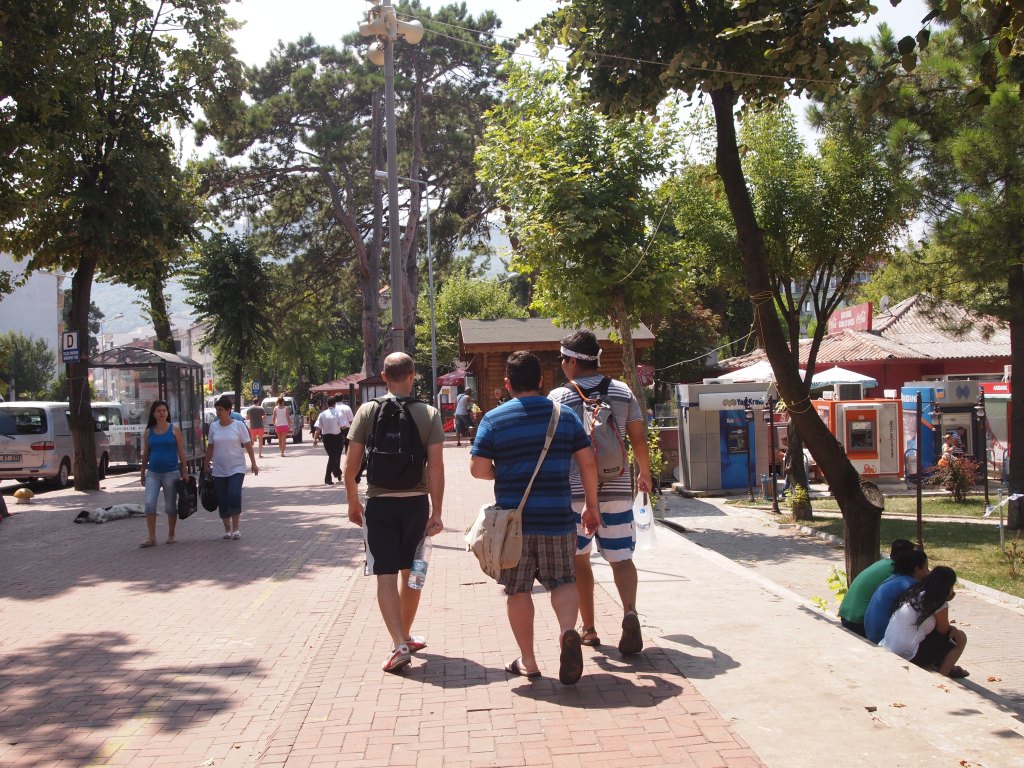 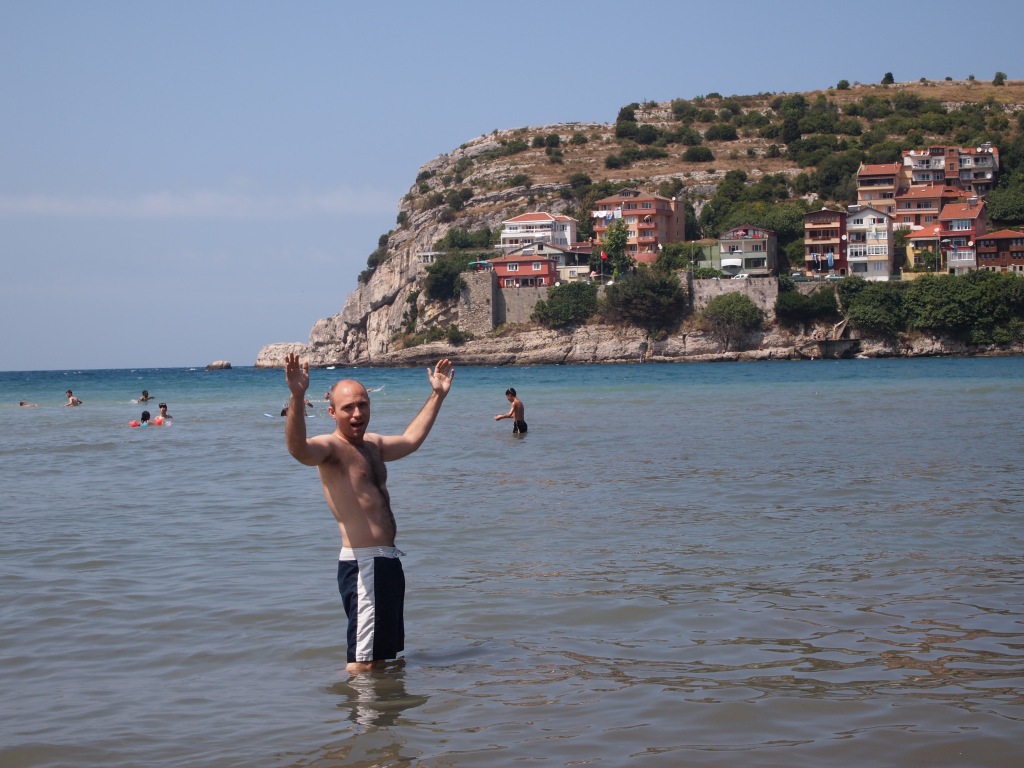 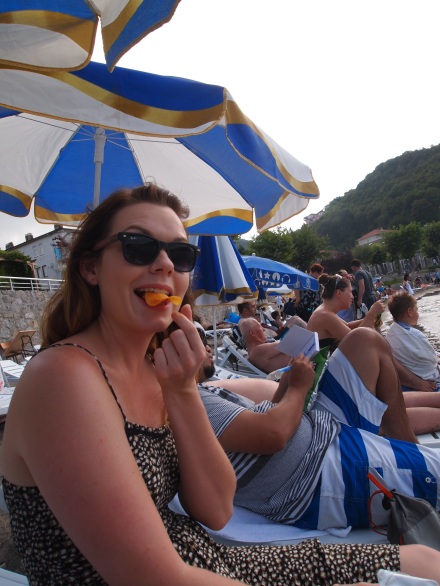 Amasra is mostly a tourist destination for Turks so it is quite possible that we are the only Americans here. So far there is less English spoken and we’ve all had to learn a couple more Turkish words, but everyone has been very friendly and accommodating of our inadequacy. It’s nice to finally be in a place where I feel like an outsider. Istanbul is so gigantic and cosmopolitan that you can almost forget you’re in a foreign country – although there are obviously indications. Amasra has given us the chance to see a different side of the country and its people, and it’s refreshing.

Following our time at the beach we all wanted to eat so we went to a small pide (Turkish pizza) place not too far from the harbor. We wanted to end our final evening with a sunset boat tour so we went over to the docks at the big harbor and hopped aboard. We received a lovely 45 minute tour of the town as the sun descended. It was a great conclusion to the evening. 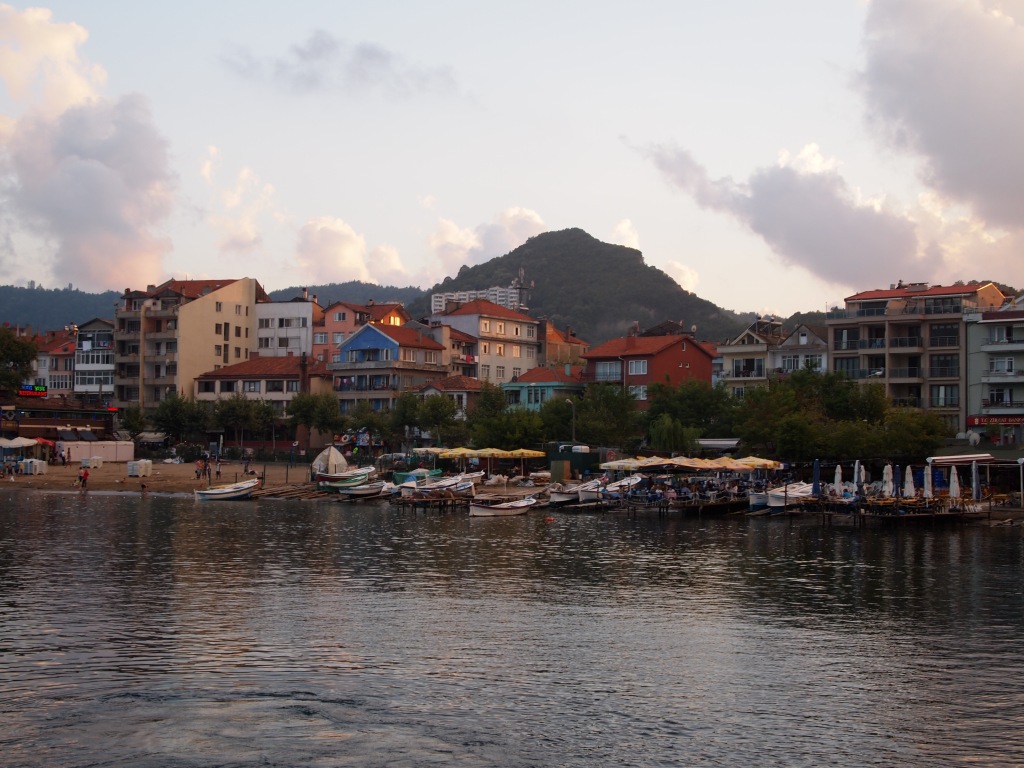 On the boat in Büyük Liman

Being serenaded in Turkish

Now Tim and Rudy are smoking some nargile across the street and I think I’m about to call it a night. Only one more day in Turkey and only about half a day in Amasra. Tomorrow we leave at 3:30pm to go back to Istanbul in order to catch our early morning flight on Wednesday.