I apologize for our absence recently. The weekend after Zach’s birthday we were tending to Truman so we didn’t do much. As many of you know Truman was diagnosed with IVDD (inter-vertebral disc disease) last year. It’s a disease that is incredibly common in dachshunds and has no cure. Essentially, the discs in Truman’s spine are aging prematurely; due to the disease his discs lose moisture and harden and are then no longer able to support his vertebrae. Last year we were on vacation in Turkey when he had his first episode and we were thrust into the world of IVDD quite suddenly. Over the past year we’ve been able to learn more about the disease and its various treatments and we knew it was possible (most likely inevitable) that Truman could have another episode in Korea.

As we feared, Truman did have another episode. He had a back spasm in the morning while I was eating breakfast and getting ready for work. We had brought some of his medication with us from the US so we began using that. However, after a few days, it became clear that we needed to visit a vet. We were slightly concerned because we weren’t sure how familiar the vets here would be with IVDD. Last year our vet prescribed a conservative treatment called crate rest. Similar to bed rest, crate rest involves keeping the dog confined to a crate or small area so that the scar tissue can form and it prevents the dog from doing further damage while the disc is still freshly injured.

Zach found an English-speaking vet listed on Korea’s animal rescue website so we journeyed by subway with our injured pup to his office. When we walked into Perth International Animal Clinic we were greeted by the vet’s assistant/front desk person. She was so welcoming and friendly (and from Round Rock, TX)! She had the vet on the phone as soon as we told her what was wrong and he said he’d be there in 10 minutes. We were pleasantly surprised by Dr. Yang. He knew exactly what IVDD was and he was familiar with crate rest. He agreed that since Truman wasn’t paralyzed and didn’t appear to have severe nerve damage, crate rest was our best course of action. He injected Truman with saline in his spine and a pain killer in his leg. Truman was a real trooper.

Getting his pain killer

Dr. Yang gave us some medication for Truman to take over the next 5 days and then we were to determine if Truman was doing better or if we needed to consult a surgeon.

Home from the vet

He has an adorable green bandage on his leg

The cutest medication bags ever!

Thankfully Truman does appear to be better. He’s finished his medication and has been able to function without it for several days now. We have entered the worst part of crate rest though – the part where Truman doesn’t realize he’s still healing! He is not a happy camper at this point and we’re only 2 weeks in! So the next 6 weeks should be a joy… but we’re happy that he’s healing and hopefully it will be another year (or longer!) before the next episode.

If you’re interested in learning more about IVDD, check out this great website and incredible resource for owners of dogs with IVDD: http://www.dodgerslist.com/literature/IVDDcourse/what_is_disc_disease.html 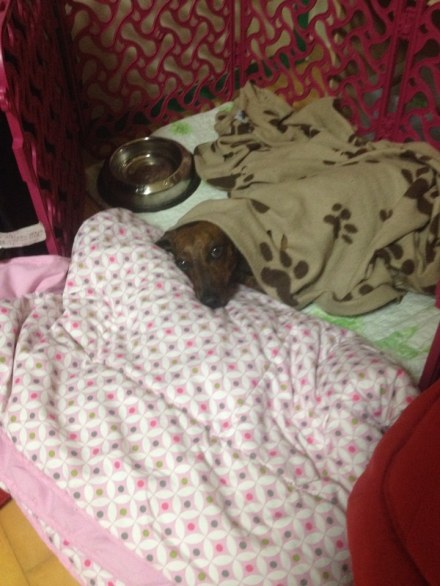 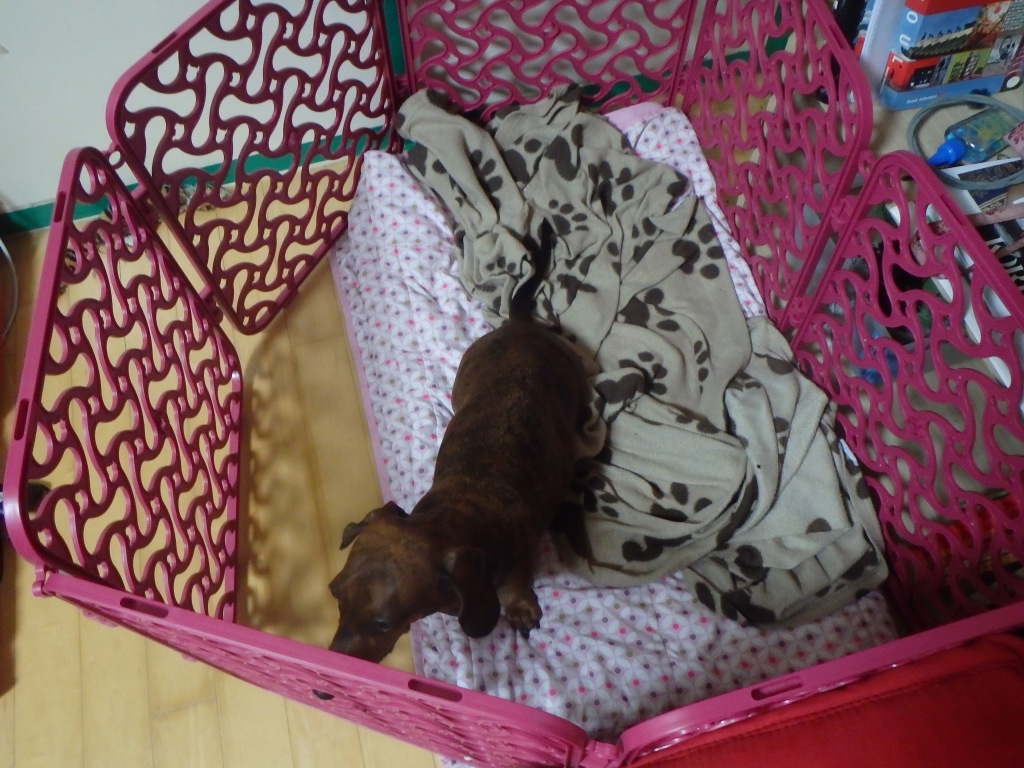