On Sunday we marked another item off our Seoul bucket list – hiking in Bukhansan National Park.

The Bukhansan range is Seoul’s natural northern boundary and means, “Mountains north of the Han River.” The park is accessible by subway which helps make it one of the most popular hiking destinations for Seoulites. That also means that it can get quite crowded – which in our opinion is not ideal for hiking. The most popular trail is the hike to the summit of Baegundae Peak. I read a couple of blog posts about the hike and they quickly persuaded me to look for another trail. Sometimes the hike up Baegundae is literally a single-file line of people! So, although, we live only a few subway stops from the Baegundae Trail I chose a trail on the opposite side of the mountain range.

Since the trail head was on the opposite side of the park it would take us an hour and a half to get there by subway. We thought it might save time to take a cab so we caught one outside our building. Unfortunately it didn’t save us much on time or money. The cab driver didn’t even know where to take us! He pulled over several times to ask other people! Eventually we just got out at a subway station and took it one stop over to our intended destination – Hoeryong Station.

Disclaimer: While we have experienced a lot of Korea’s natural beauty in our short time here it has been difficult for us to overcome the very recent memory of our time surrounded by the surreal beauty of Grand Teton, Yellowstone, and Glacier National Parks in the US. Our hikes in Korea have really paled in comparison. One main complaint we have is the trail construction. As you’ll see in the photos below, at various times there are staircases plopped down in the trails and we would simply be climbing straight up a steep set of stairs rather than winding our way through the forest on switchbacks groomed into the natural landscape. The trails here go straight up and straight down – it’s pretty rough on the knees.

After a 15 minute walk from the station we started our hike! 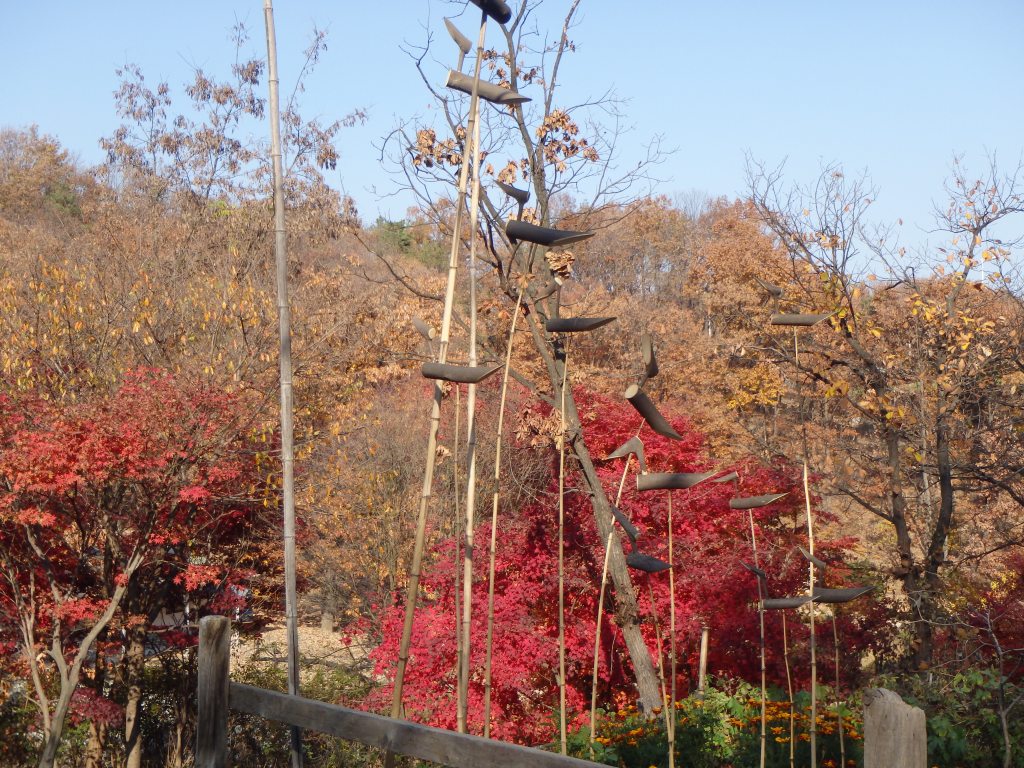 The first kilometer of the trail was a road that led to a temple – Hoeryongsa. 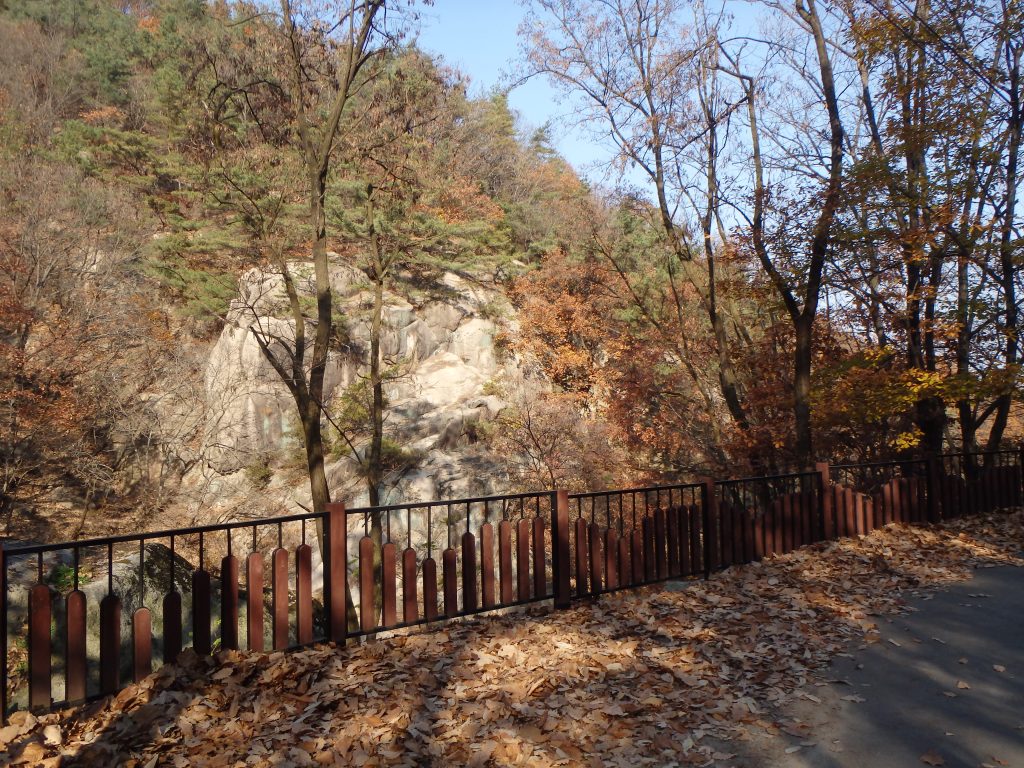 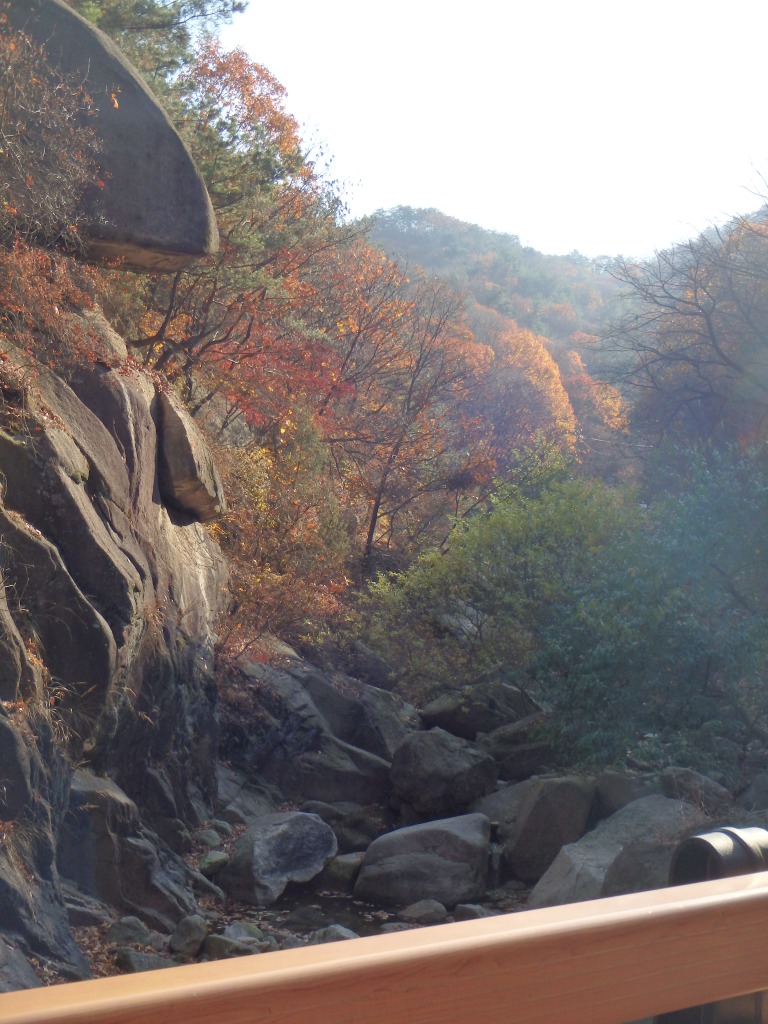 When we reached Hoeryongsa we decided to eat our snack – kimbap for Zach and a samgak (triangle) kimbap for me. 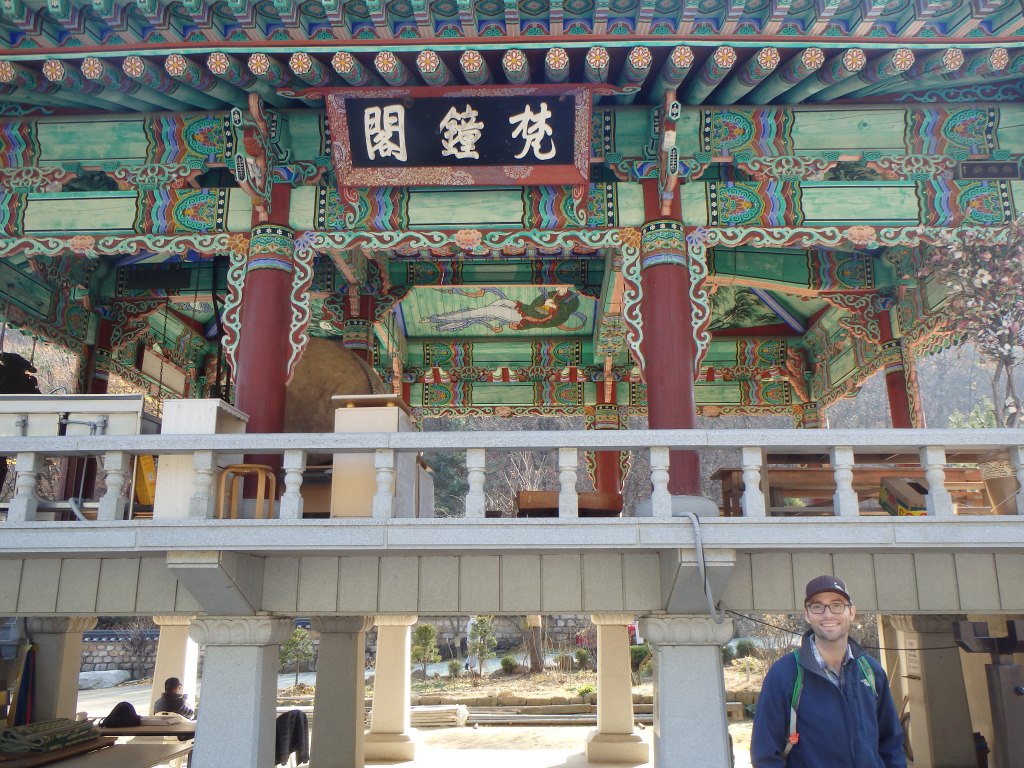 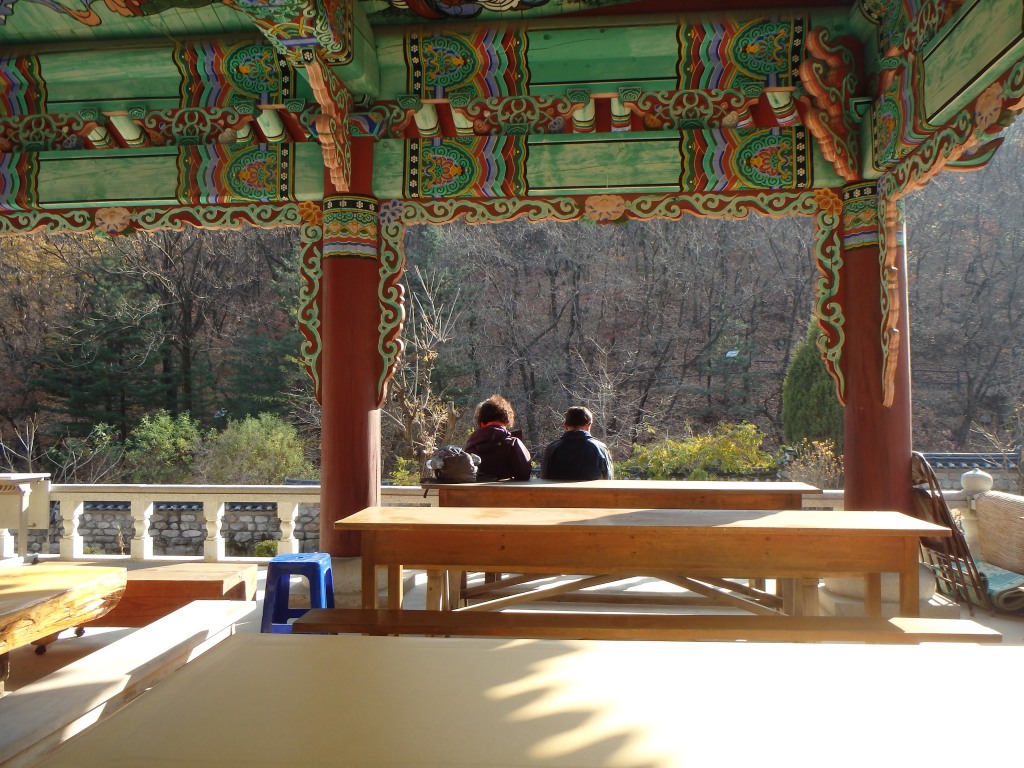 Fuel for the hike 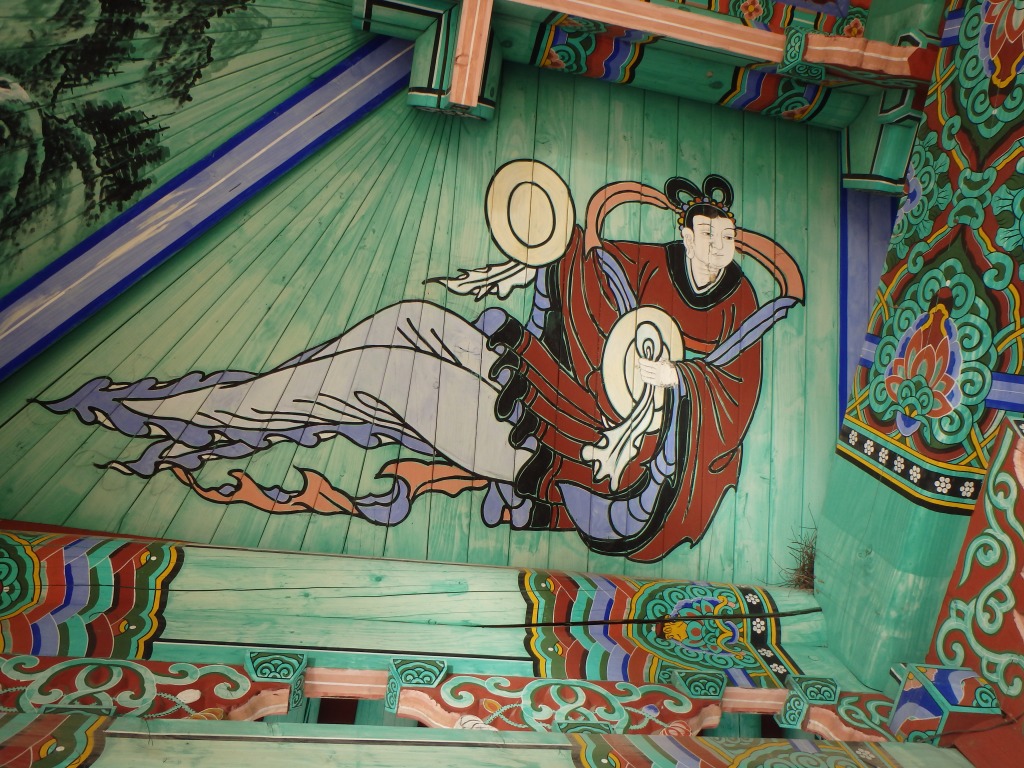 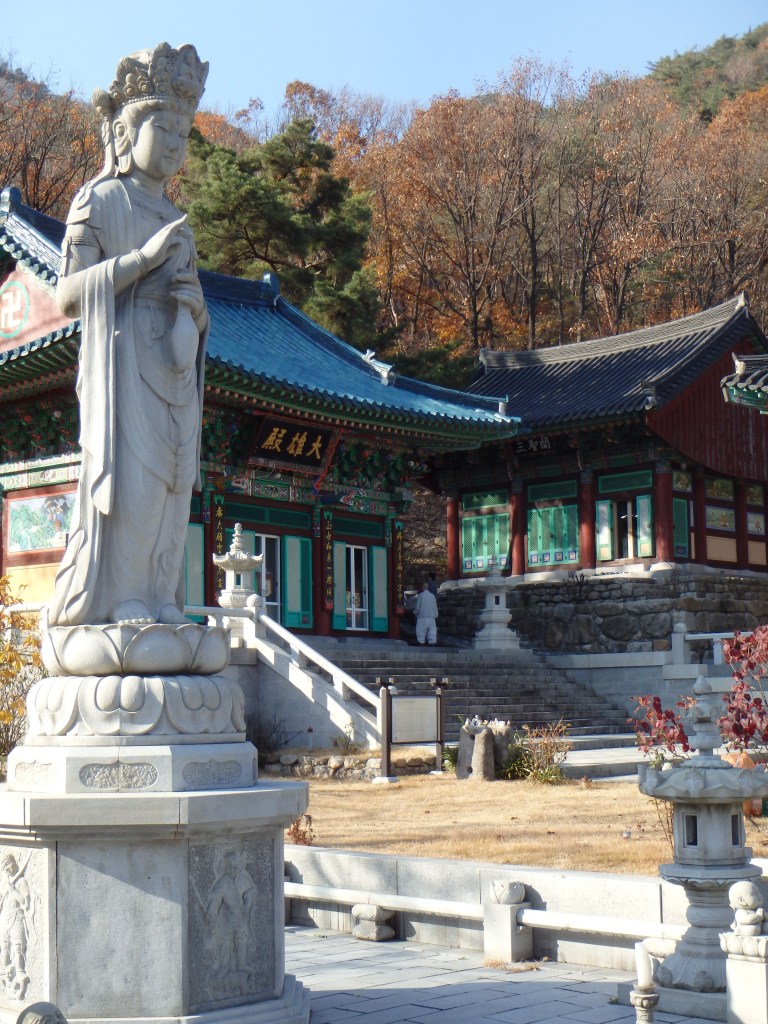 After we finished our snack we began our hike up to the ridgeline. It was a kilometer and a half to the ridgeline but it was very steep. We essentially hiked straight up! Bleh. There were various signs along the way and all of them had cute cartoons on them. We couldn’t read any of the signs so hopefully none of them were important! It was on this part of the trail that we encountered our first set of stairs… 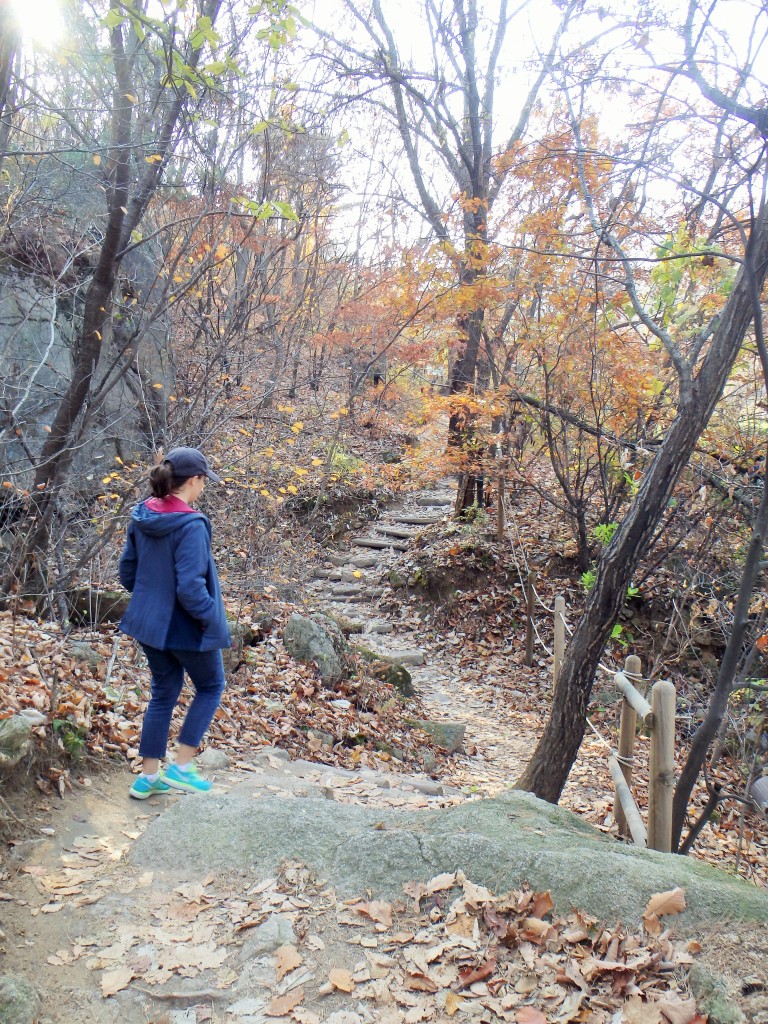 What a cute bear 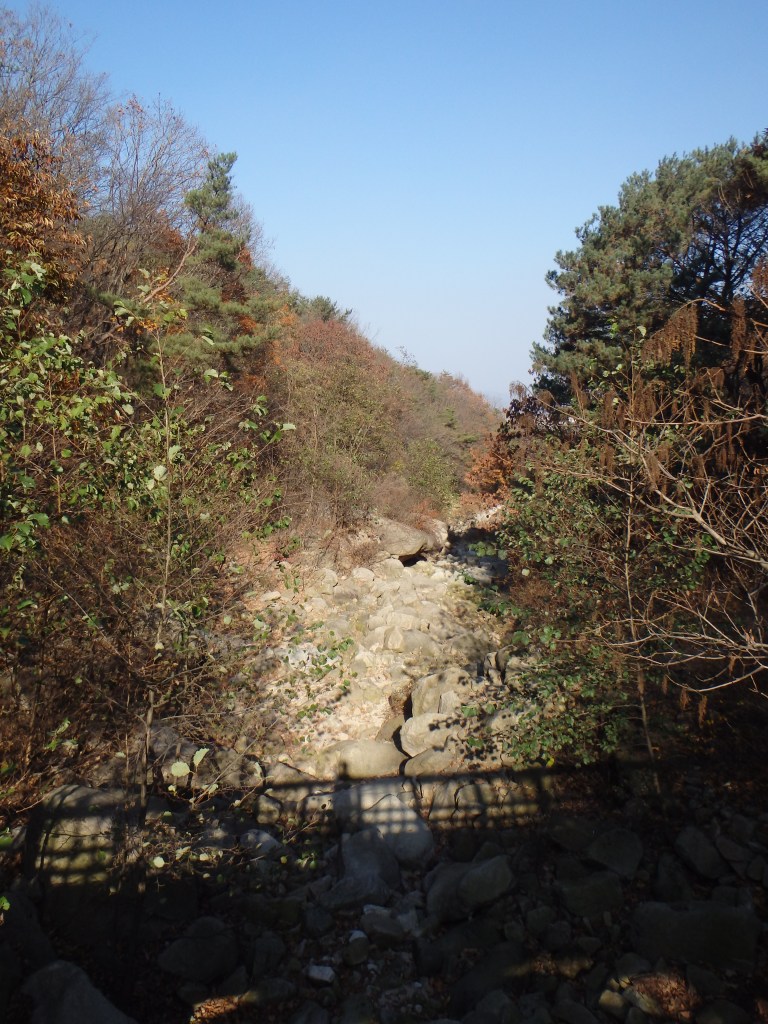 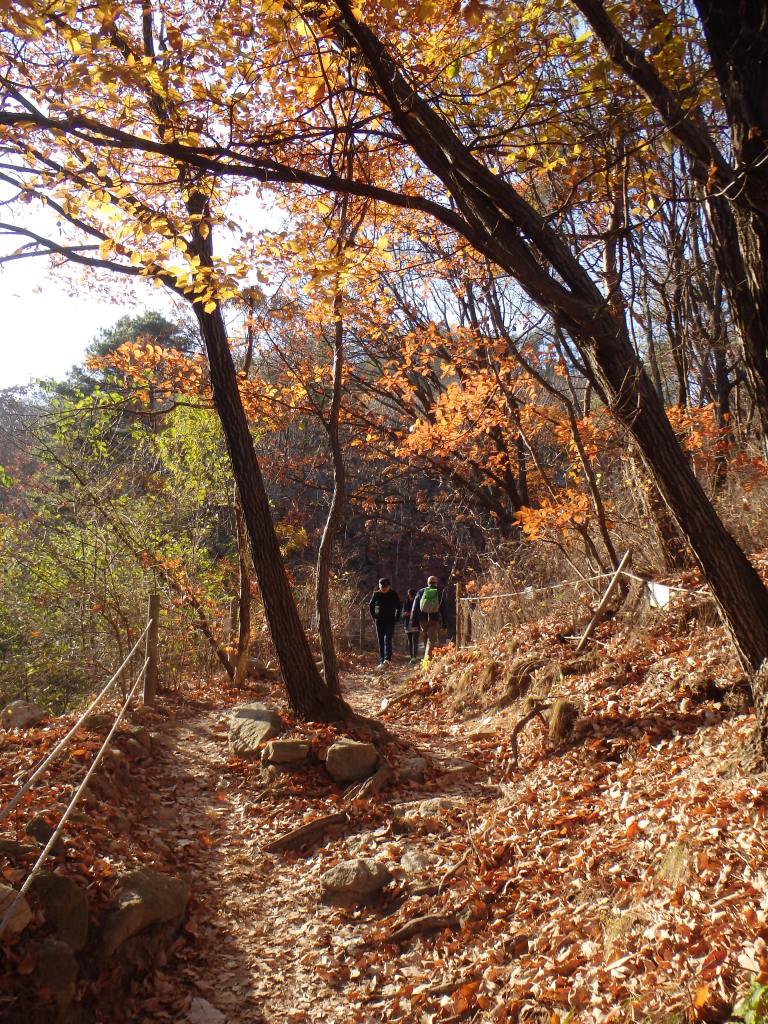 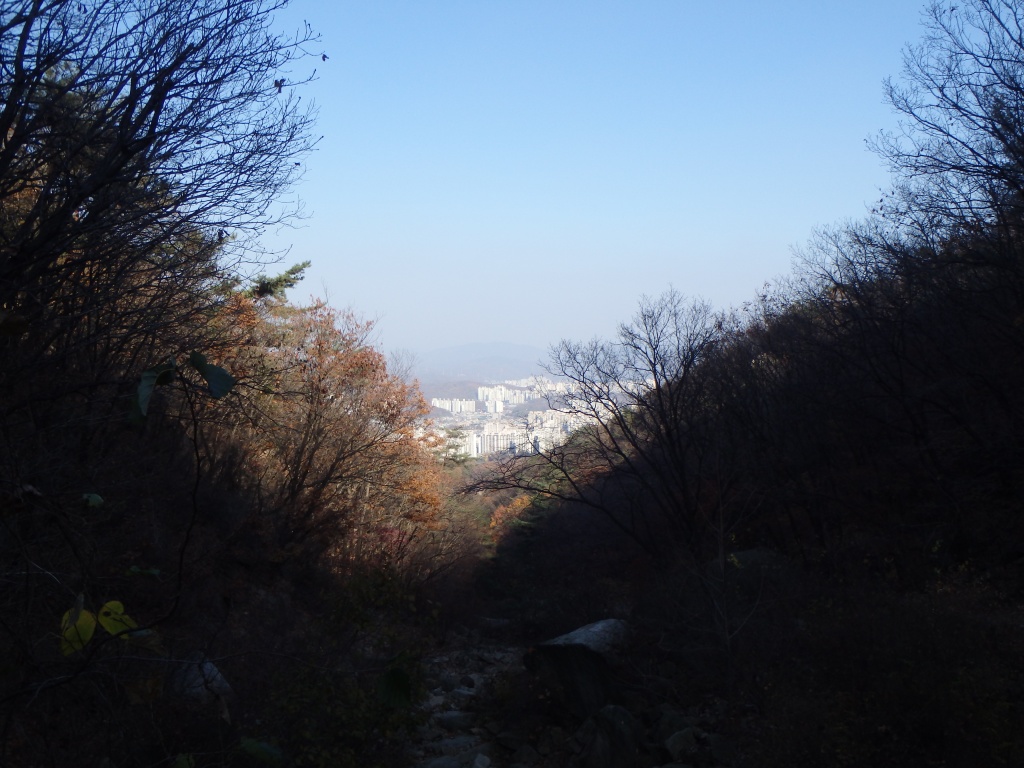 A little peak of the city below

Are those stairs up ahead?! 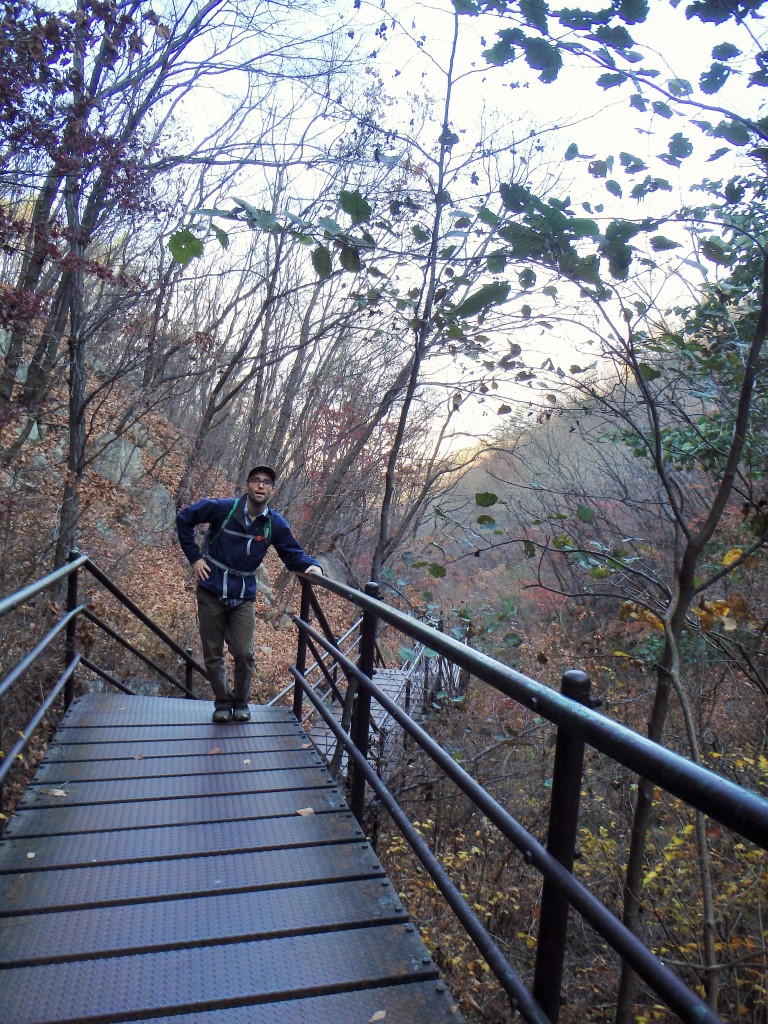 Why are there so many stairs!? 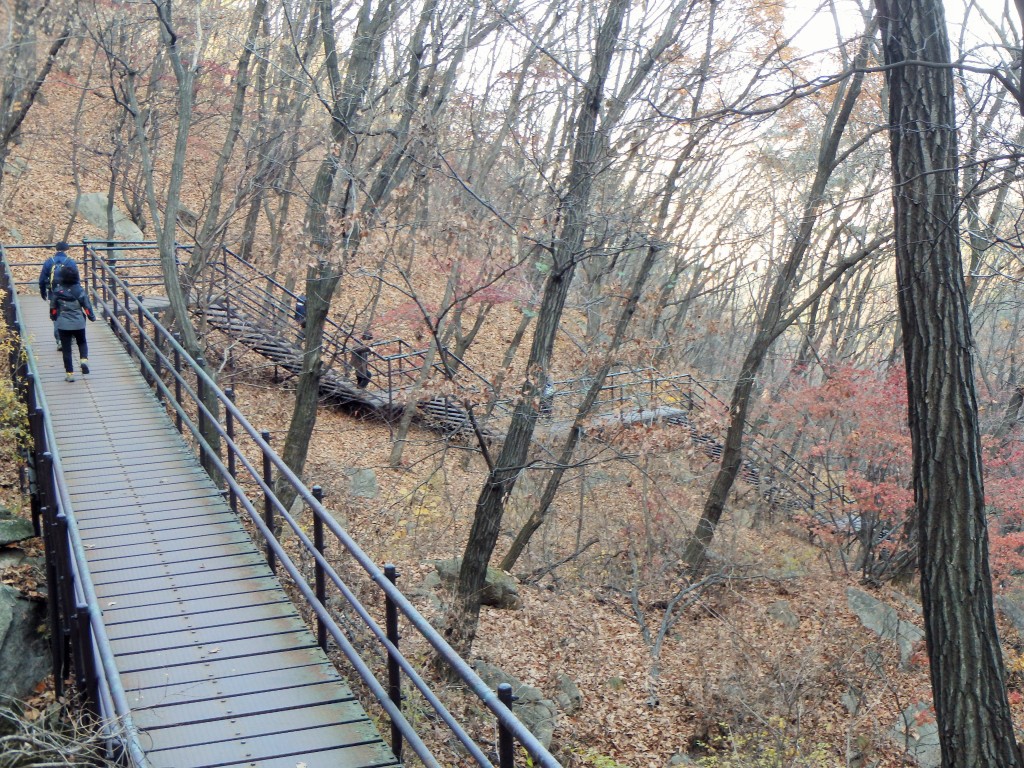 Straight up to the ridgeline 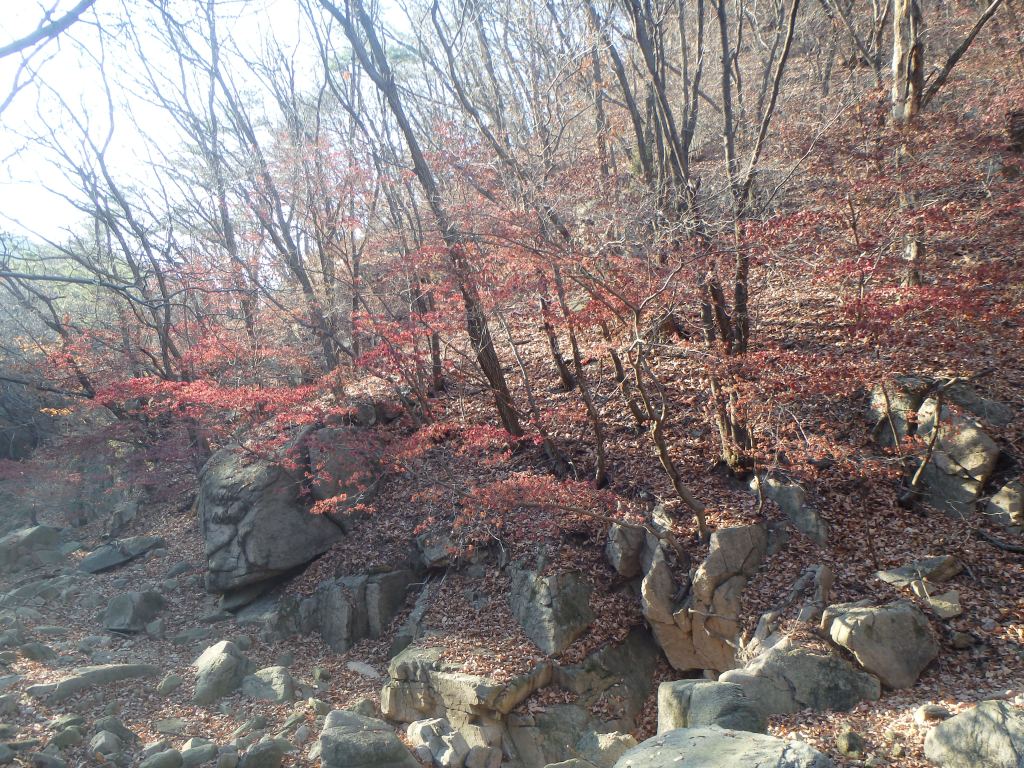 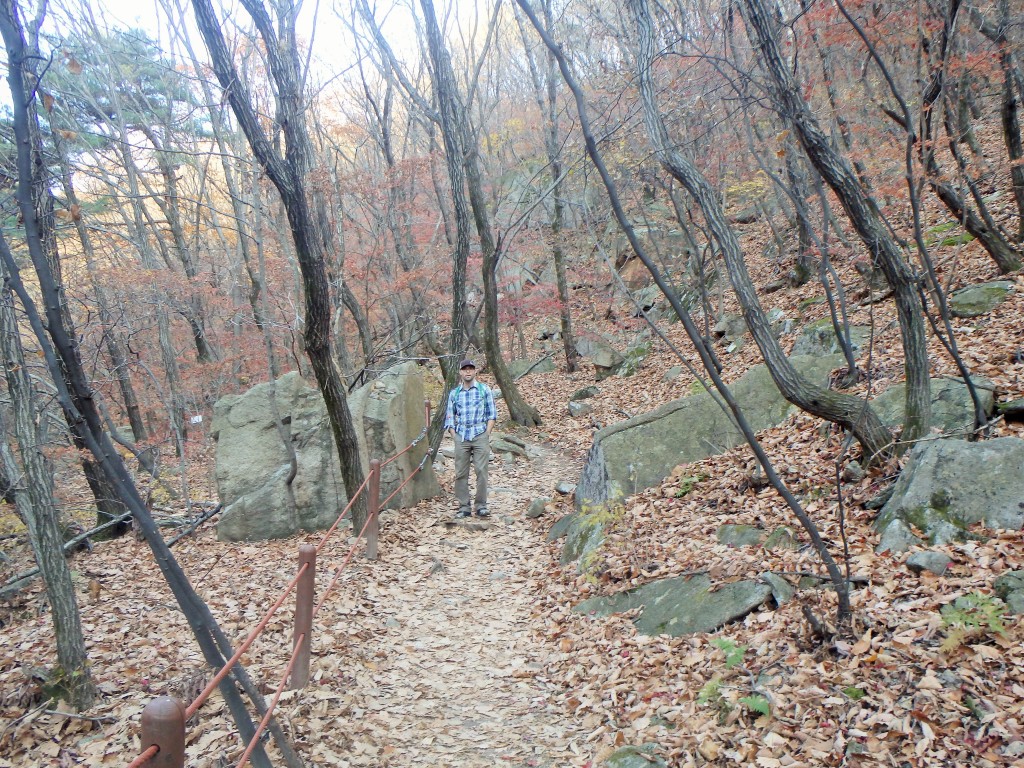 Once we made it to our next turn off, it became clear that we should have stayed up on the ridgeline. We had started our hike rather late in the day (2:40) and knew that we would be racing the sun to get off the mountain before dark. I think it was around 4 or so when we began walking toward Songchu Falls and the Obong Crossroads – a longer and steeper undertaking than I realized. As we walked in the direction of the peak the trail got steeper and steeper. Some Korean hikers even told us it was too late to be heading that way – “too late” – and another group just laughed at us! But we continued on. It was on this stretch of our hike that I began to feel really panicked about being up on the mountain as the sun went down. What I thought would be a nice stroll through the valley was actually a tough ascent up toward the ridgeline. And don’t forget, when I say ascent, I mean essentially hiking straight up. There wasn’t much relief for our knees, and of course, there were more staircases. 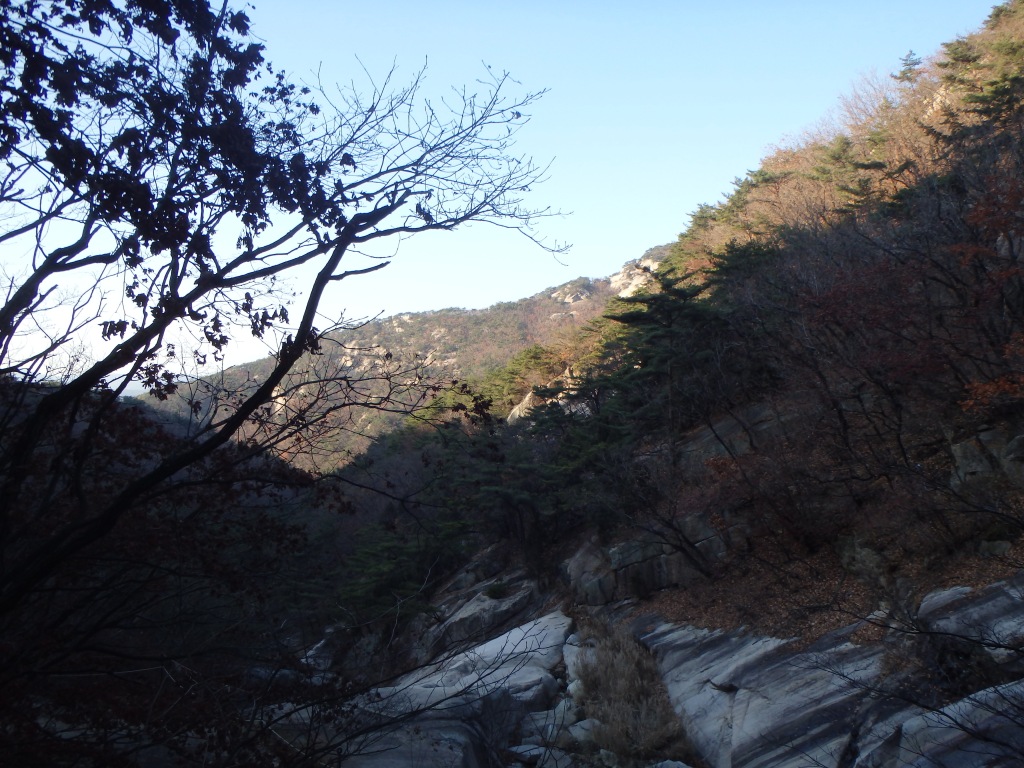 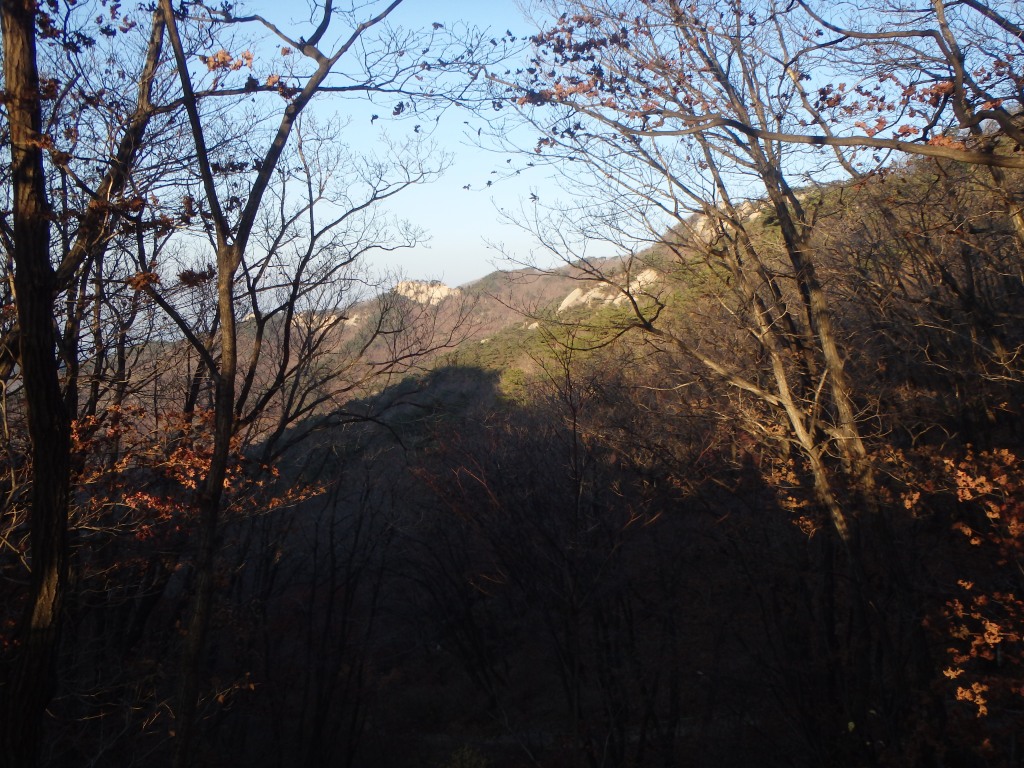 At last we made it up and out of the valley and back to the ridgeline. We knew we couldn’t make it to Obong Peak and get back down the mountain before the sun set so we headed in the opposite direction toward Jaunbong (Dobongsan Peak). This path was daunting at first but much more exciting. We were climbing over the rocks with beautiful views all around us. It ended up being the perfect time to be up there as the sun’s warm glow was beginning to set over the range.

I felt great relief once we made it here 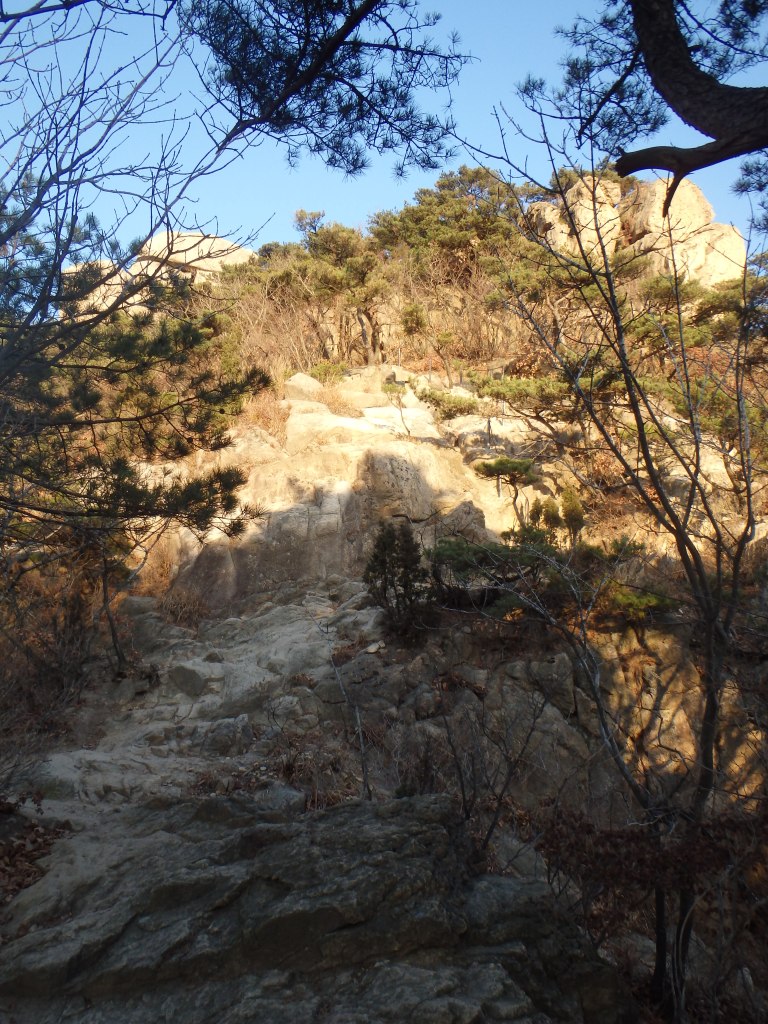 beautiful views of the range 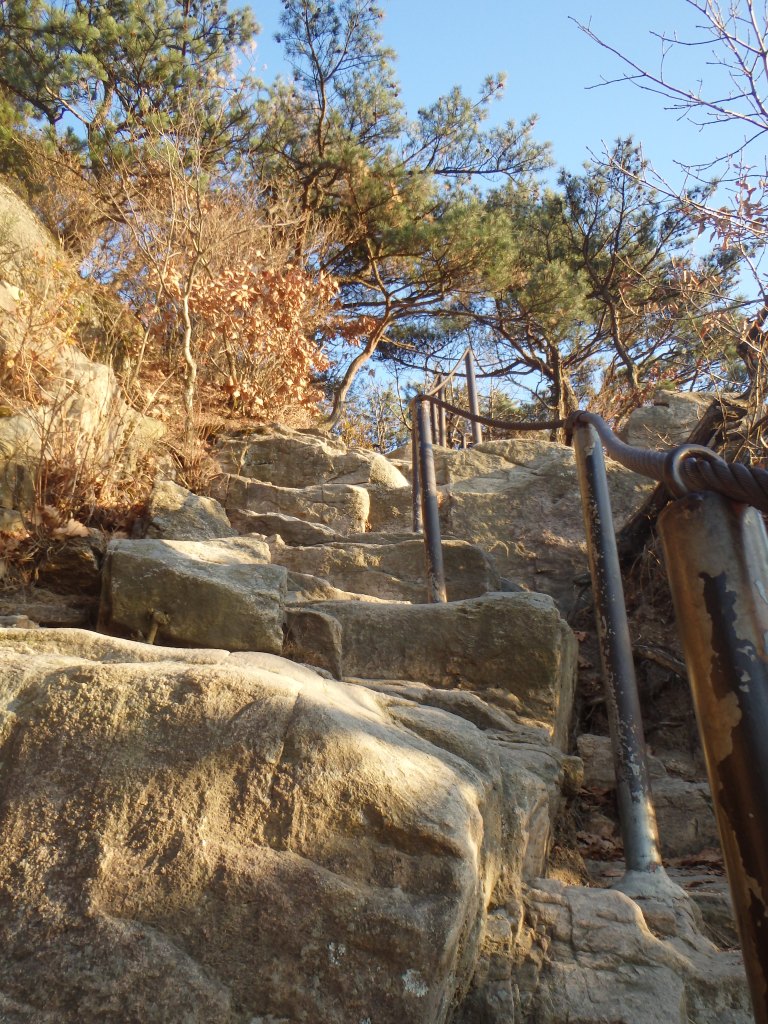 Some railings to help us pull ourselves up 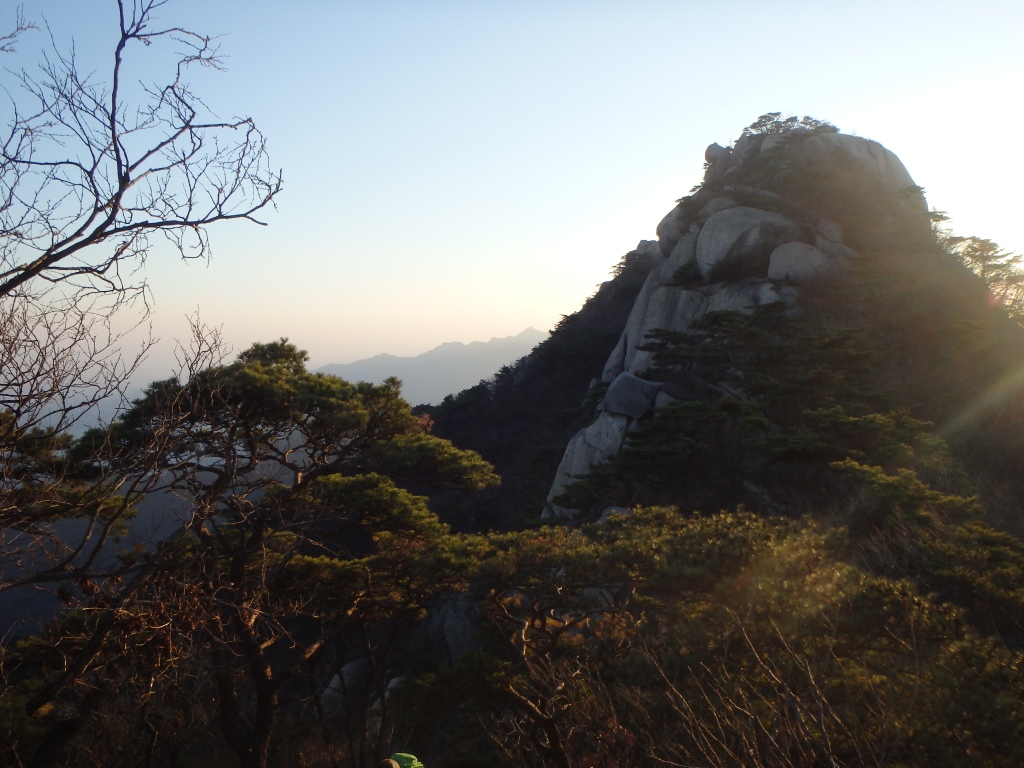 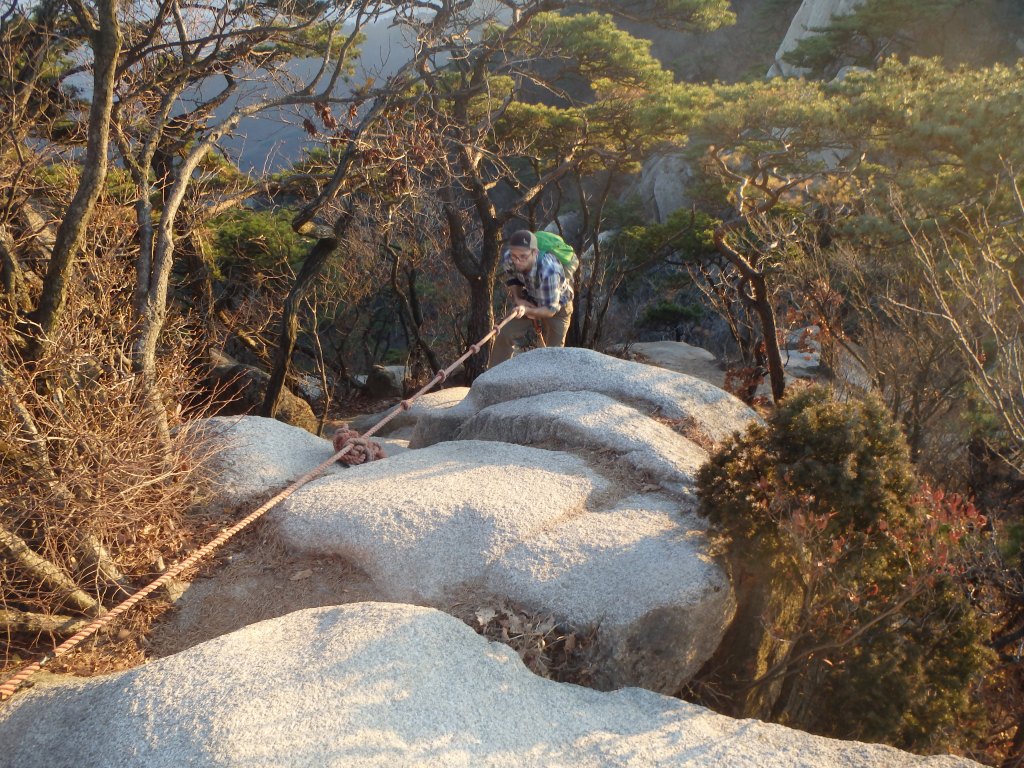 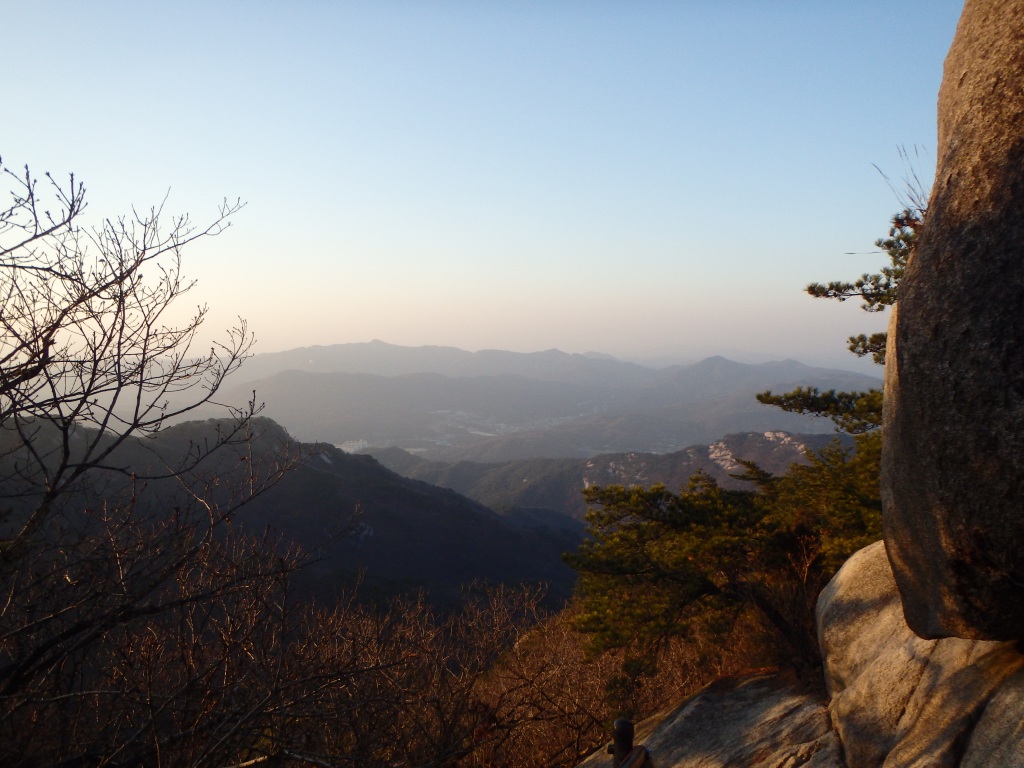 We decided to start down the mountain when we got to Jubong so that we could at least get through the most difficult part of our descent before we lost the sunlight. Once we reached Madangbawi I was relieved to see that there were several other hikers enjoying the sunset view. The rest of the way we were always behind other hikers. We only ended up hiking in the dark for the tail end of the hike and even then it wasn’t too difficult since our eyes were acclimated. Unfortunately, the trail was pretty steep and full of steps so at the end our knees were killing us. I’m unsure of the exact route we took down because we couldn’t read the signs in the dark but we passed a couple of temples and possibly the shelter. 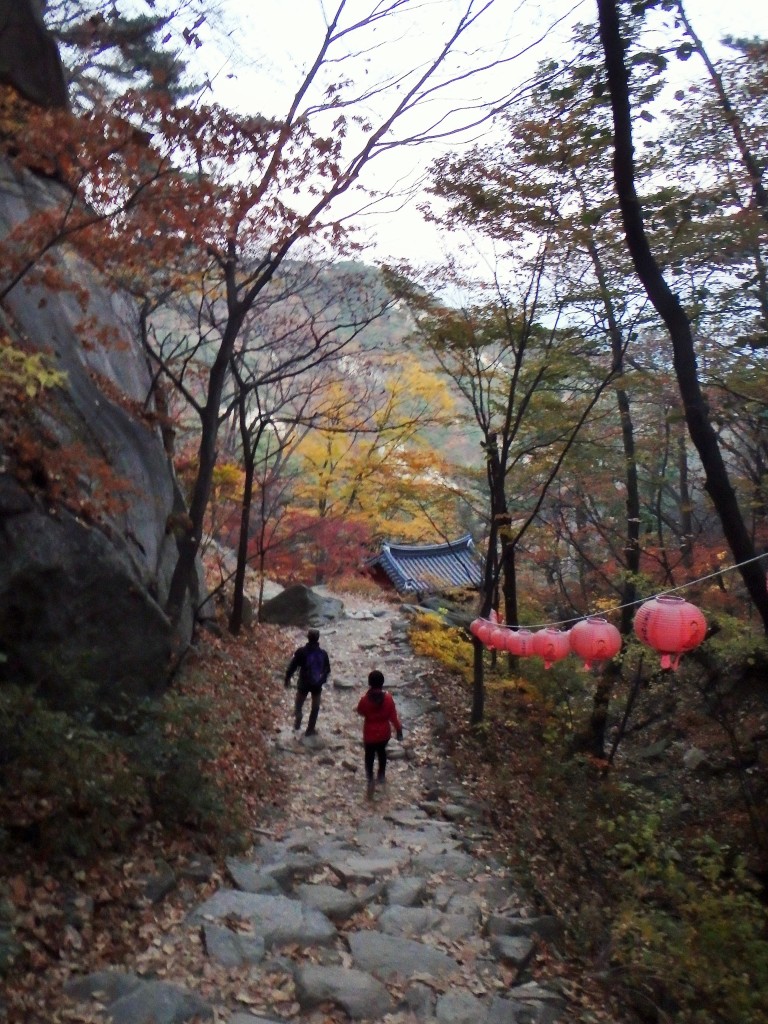 Exhausted but happy on the subway home

We got off the mountain around 6:30 or so. It was an exhausting 4 hours of hiking, often at a more rapid pace than we would normally use. Our knees were the biggest casualty of the day. I’m not sure if we would return to Bukhansan for another hike or not. It’s hard for me to get excited about a trail that goes straight up the side of a mountain, but ya never know.

Here’s the map we used while we were hiking. I’ve highlighted our route except for the parts where I was unsure.