On Monday we took a short road trip to Lava Hot Springs, Idaho. Only a two hour drive from SLC, we had a little time to sleep in and still catch Chick-Fil-A breakfast hours down the road on I-15. Nothing like a chicken biscuit to start the day! The town of Lava Hot Springs, located on the banks of the Portneuf River, is book-ended by hot spring-fed pools and an aquatic center with an outdoor water park. A short distance from nearby Pocatello, it’s a small town of roughly 400 people looking to attract visitors on their way to the Tetons or other parts of Idaho. It’s the perfect day trip for folks from SLC and offers even more in the summer with camping, river activities, and a zip line (which can be done year-round but who wants to zip line in 20° weather?).

Like a lot of our experiences in Idaho, Lava Hot Springs felt like a hidden gem. It wasn’t crowded, though there were probably more bathers than usual as it was the day after Christmas, and it was reasonably priced. For all day use, it was $6 for each of us and the lockers in the changing rooms were $0.50. It’s a small facility, but nicely maintained and the heated floors of the changing rooms and outdoor sidewalks were an added bonus. There are five gravel-bottomed pools each at varying temperatures ranging from 102°-112°F. Though it would have been nice if signs identified the temperatures of each pool, it was easy enough to figure out. The hottest pool was HOT. It was definitely tough to sit in for very long. I preferred the second hottest pool, but we also spent a significant amount of time in the coolest pool which was very comfortable. 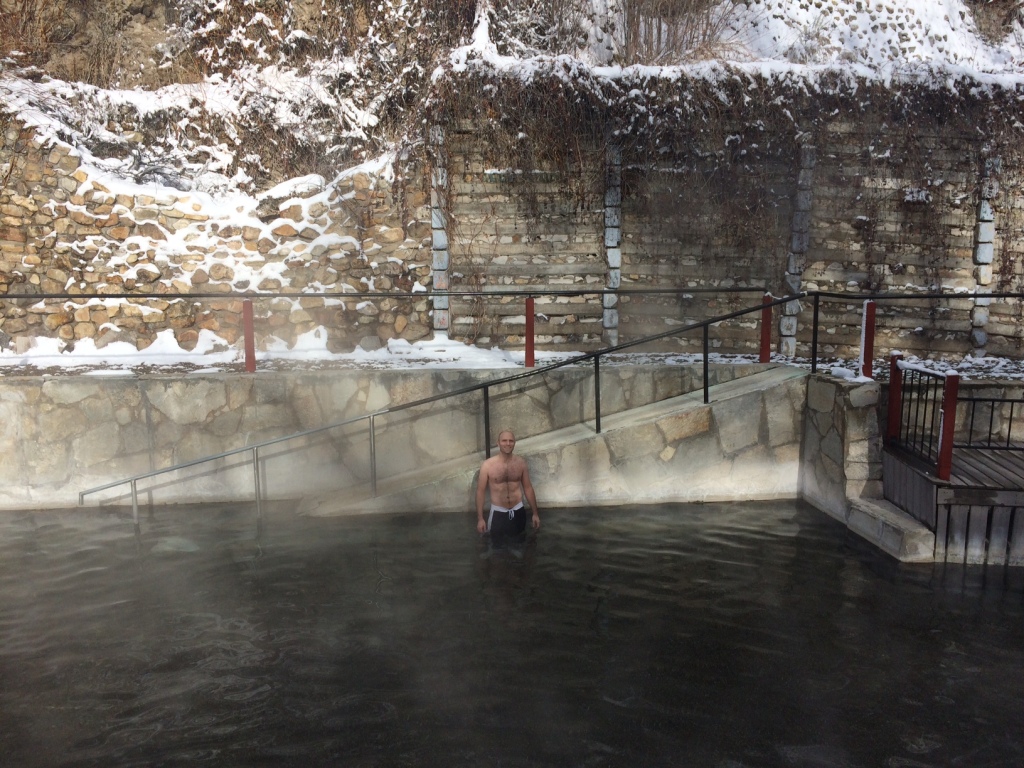 Zach in the hottest pool

It’s definitely a good idea to bring a water bottle because the heat dehydrates your body quickly. I was incredibly thirsty the entire time, and it was nice to keep some water poolside with me. All in all, it was a very relaxing time. We spent around 2 therapeutic hours soaking at the pools. Though we didn’t have the chance to try out the two smallest kidney-sized pools, we had plenty of room in the other pools to stretch out without feeling crammed in a hot bath with strangers. Thankfully I am far removed from the days when Dante’s Peak (a 1997 movie in which my cousin was an extra) scared me away from hot springs. I have finally put enough time between the opening scene and myself that today I can actually soak in a hot spring with LAVA in the name.

Steam rising off the coolest pool 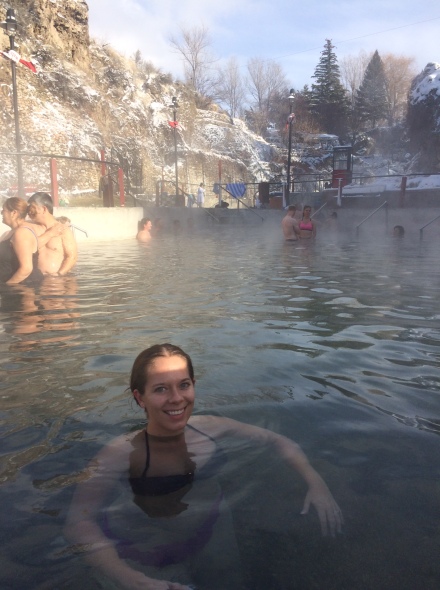 In the second hottest pool

After we changed into dry clothes, we decided to walk down the street for lunch at The Royal Hotel and Pizzeria. The service was a bit slow, but we’ve come to expect that in Idaho’s less travelled parts. We certainly weren’t in a hurry and appreciate the opportunity to slow down anyhow. We each had a beer and then split a pizza before bracing ourselves to go back out in the cold. Before leaving, we drove to the historical marker just above the hot pools to read about the area’s history – Native Americans used the area as a winter camp before being relocated to the nearby Fort Hall Reservation – and then turned around to go back to SLC. 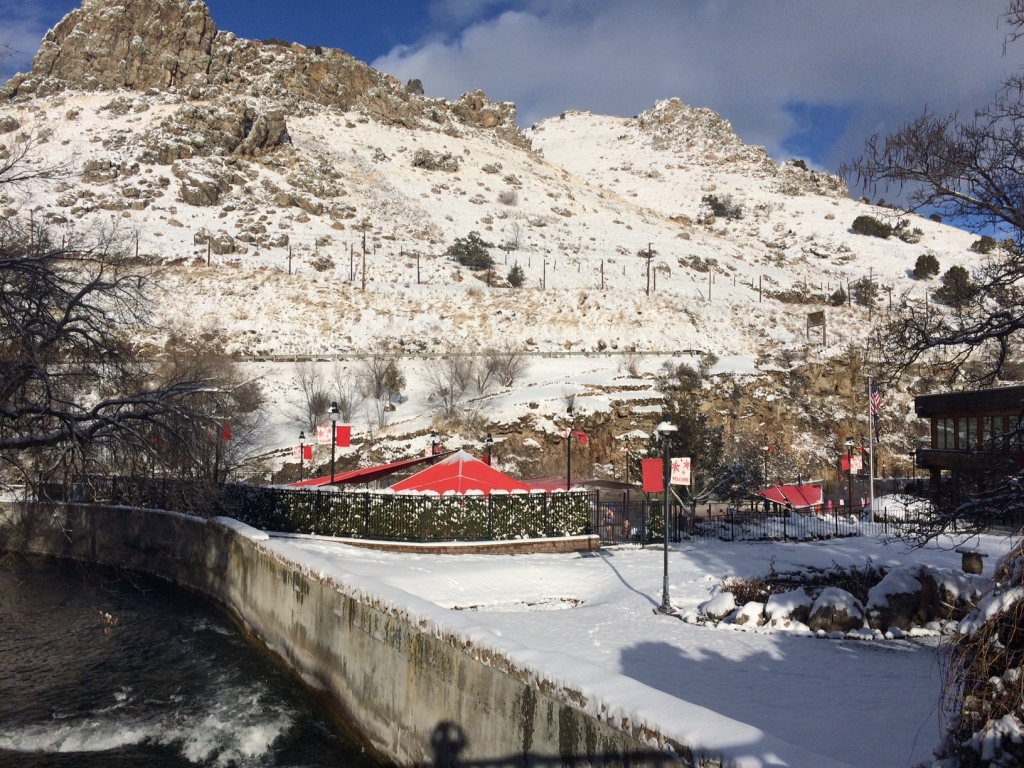 From the bridge over the Portneuf River, the hot pools are tucked away from the road 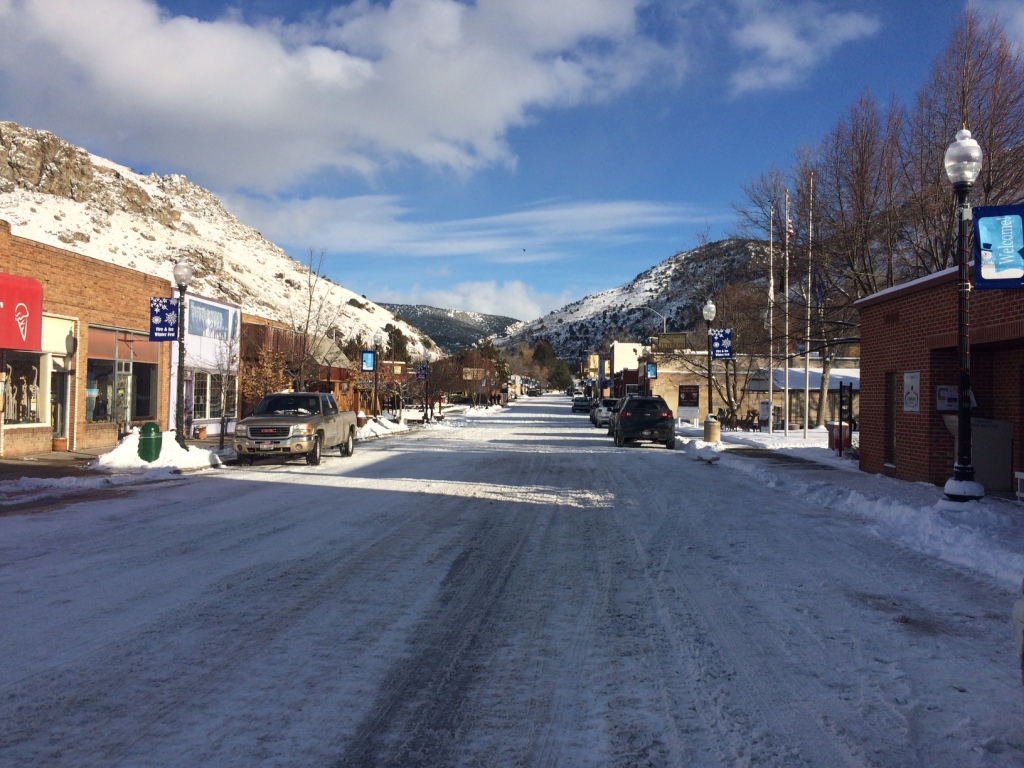 Bird’s eye view of the hot pools near sunset