It was still early in the day when we left Moab, so we decided to make a detour on our way back to Salt Lake. On one of our drives to Utah last year, we stopped at a gas station in Wellington and noticed a large tourism signboard for Nine Mile Canyon. I had forgotten about it until Zach mentioned it the week before we left for Moab. We originally thought we would stop on our way down to Moab, but neither one of us realized what a long detour it would be. Instead, it worked out that we had quite a bit of time on Sunday and could easily while away a few hours.

Nine Mile Canyon is part of a 70 mile backcountry byway extending from Wellington to Myton. The canyon runs 45 miles through the Book Cliffs and has acted as a natural passageway from the Price River to the Uinta Basin for centuries for varied inhabitants and travellers. The name is thought to have come from John Wesley Powell’s expedition of the Green River in 1869. His cartographer used a nine mile transect line when surveying the canyon and the name stuck. The canyon is most famous for its well-preserved petroglyphs (rock carvings) and pictographs (rock paintings) by native peoples from the Archaic and Fremont cultures, and more recently, the Ute Indians, Utah’s namesake. Sixty-three rock art sites have been added to the National Register of Historic Places but over 1,000 sites have been catalogued making Nine Mile Canyon an outdoor gallery of ancient art.

We stopped at a gas station at the beginning of the byway in Wellington to grab a brochure/map of the canyon. There were nine stops listed on the brochure and the first one wasn’t for 26.2 miles so we headed off down the byway enjoying the isolation of an open road. The first stop was rather sparingly named First Site. It’s the first significant rock art site in the canyon with Fremont and Ute figures. There were several panels of drawings with some climbing required. Truman and I let Zach handle that. 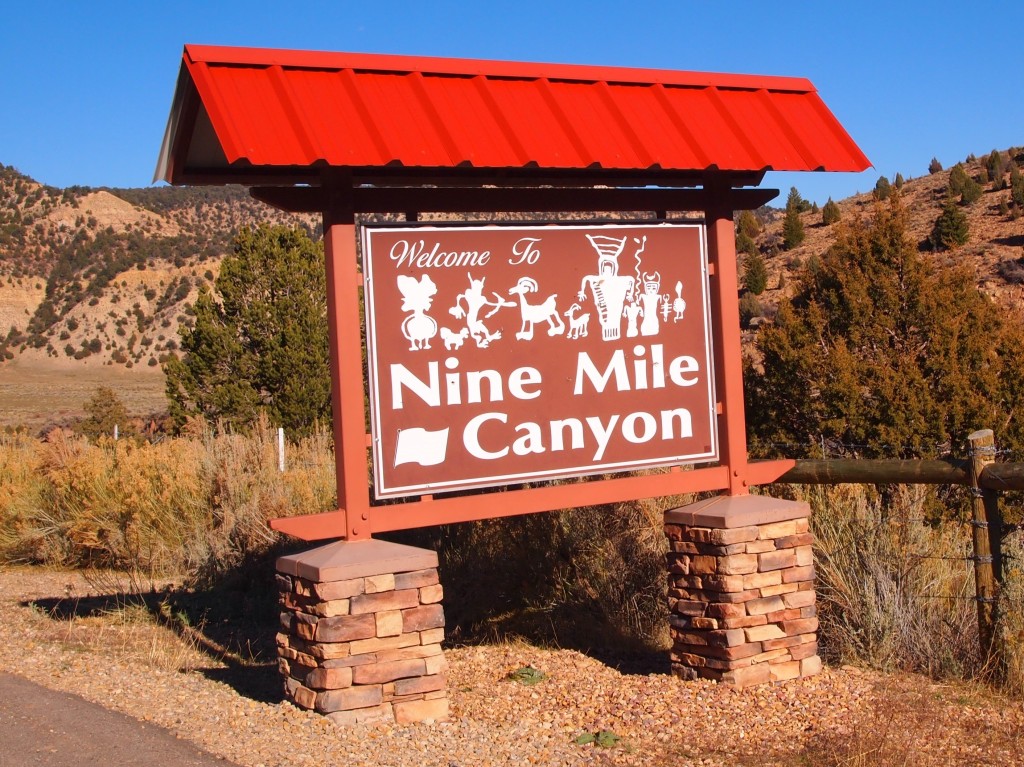 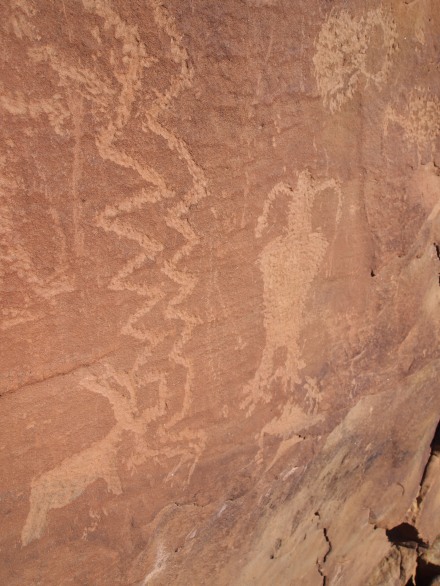 Our second stop was at Balanced Rock which is immediately off the road and is located on private property. I read that part of the brochure belatedly… The central figure at this site is somewhat mysterious. Sometimes called “Balloon Man” or “The Juggler,” a more sophisticated theory is that the figure represents Spider Woman, a Pueblo and Navajo figure who taught the craft of weaving.

We bypassed a couple stops to reach the final site, the Great Hunt Panel. This panel is the most famous in the canyon and rightfully so. Situated under an overhang, the panel seems to have been shielded from damage by the elements. Scholars believe it depicts a bighorn sheep hunt in late November or early December, the one time when the lambs, ewes, and rams are all together. There is a short trail off a small parking area which leads to the panel. As the sun began to dip toward the horizon, we had the whole place to ourselves to ponder our ancient ancestors and their lives. 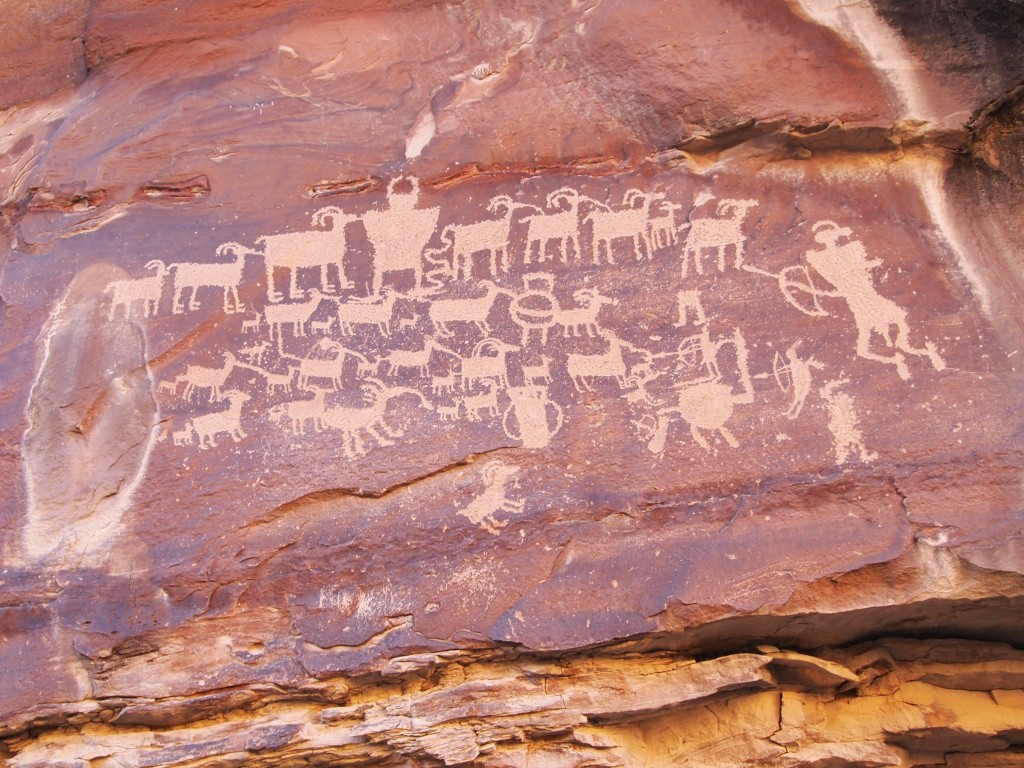 A short path to our car

Truman getting in on the action!

After the Great Hunt, we backtracked a bit to check out the Big Buffalo Site, the largest (known) buffalo petroglyph in the canyon, and then stopped at Daddy Canyon to walk along a short loop trail. The trail leads visitors on a tour of varied rock art. As we walked along the cliff faces, we scanned the rock to try and discover figures and animals in the surface. It was an impressive display as almost each rock face had something for us to find.

The canyon from the Big Buffalo Site

Although we could have gone up the byway to Myton, we decided to go the way we came and return to Wellington as the road to Myton became a rough dirt road. Maybe on another day, with more daylight, we could venture on that part of the byway and do a short hike or two. 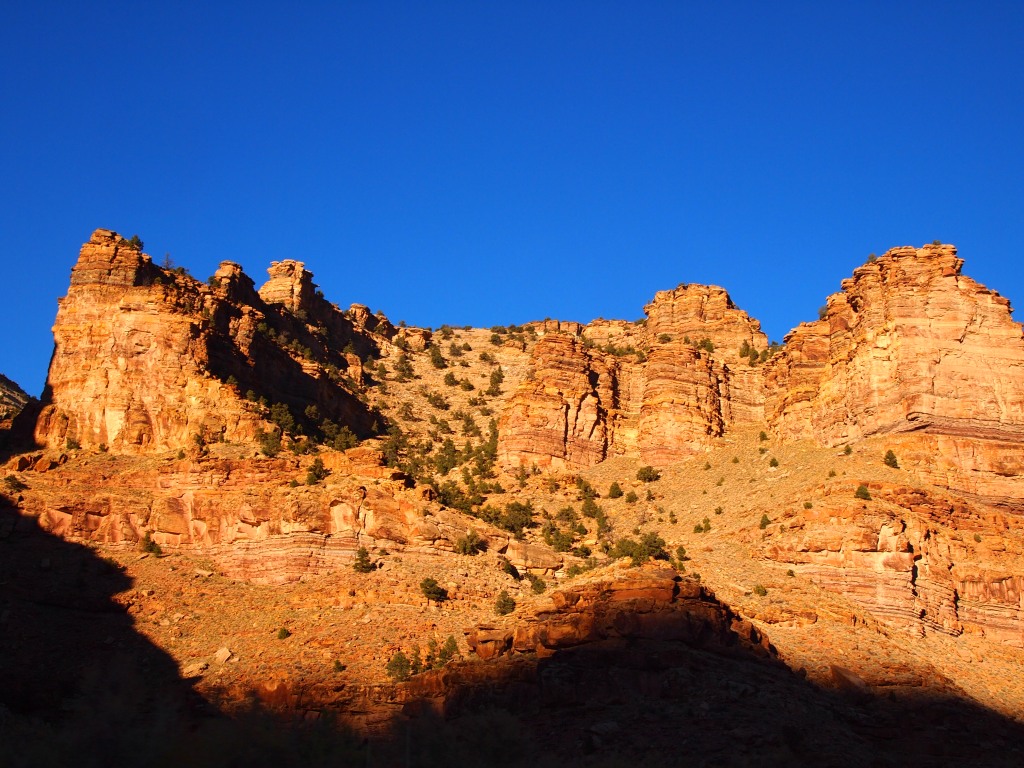 Illuminated walls of the Book Cliffs 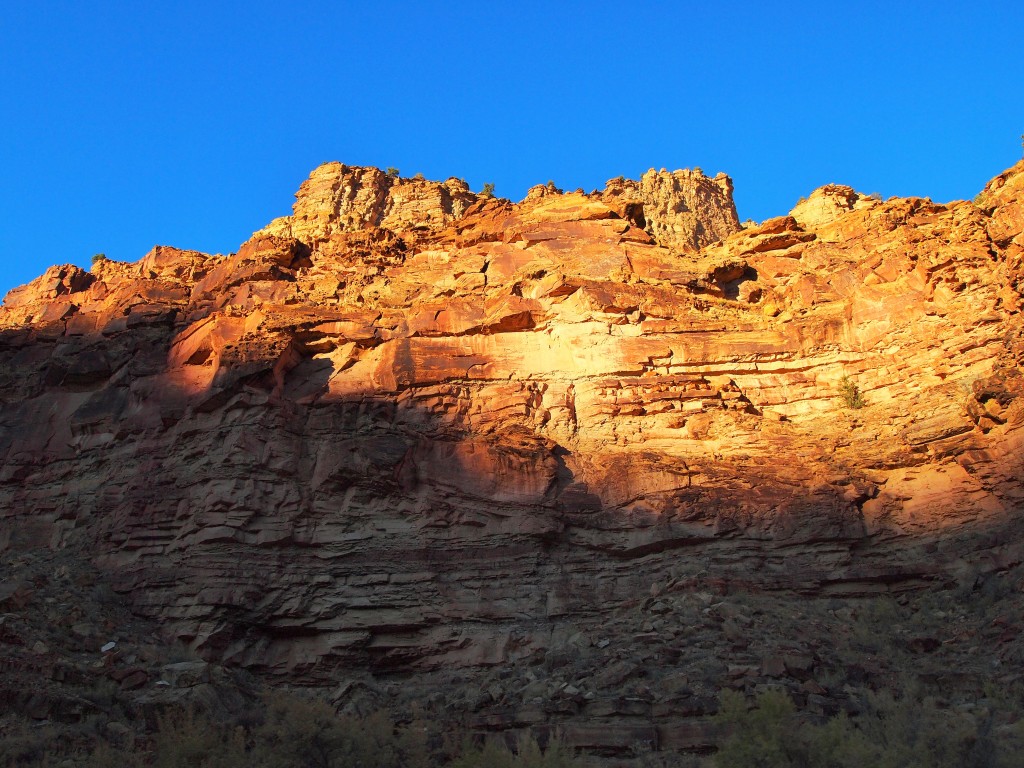