On Sunday we left Arches behind in favor of Canyonlands National Park. Back in March 2016 Zach and I toured the most accessible district of Canyonlands, Island in the Sky, which has a scenic drive to several overlooks in addition to some hiking trails. This time I wanted to check out The Needles.

The Needles is in the southeast corner of Canyonlands and fairly remote. It’s 40 miles south of Moab on US 191 and then another 35 miles down UT 211, the only paved road in and out of that section of the park. We knew it would be a drive so we grabbed some coffee at our go-to spot in Moab – Red Rock Bakery & Cafe – and hit the road before 8am. I love the drive between Monticello and Moab; the high desert sage brush mixed with the red rock landscape is what makes southern Utah so picturesque. Before we arrived at the park, we stopped at Newspaper Rock State Historical Monument.

Just off the road, this giant collection of petroglyphs is believed to be a record of 2,000 years of activity. Early peoples are thought to have contributed to this slab of rock over time, each person adding their own account of life. More recently, early settlers also made additions – we noticed some initials and dates on the periphery of the slab. The sheer size of the panel puts everything we saw in Nine Mile Canyon to shame; it’s massive. Many of the figures and shapes were similar although we hadn’t seen any footprint etchings before.

After leaving Newspaper Rock, the road opened up into a large and breathtaking valley leading us the rest of the way to The Needles district. Similar to Island in the Sky, there is a scenic drive and an overlook for the less able of visitors, but the majority of the district caters to hardy backpackers and day-hikers. Since we didn’t get a particularly early start (it was around 10am when we finally arrived) and we wanted to be able to get in a visit to Island in the Sky later, I chose the longest of the short day hikes, the 2.4 mile Slickrock Trail. When we stopped in the Visitor’s Center, the ranger also recommended tacking one of the tiny hikes on to our itinerary, a 0.6 mile loop trail called Cave Spring. 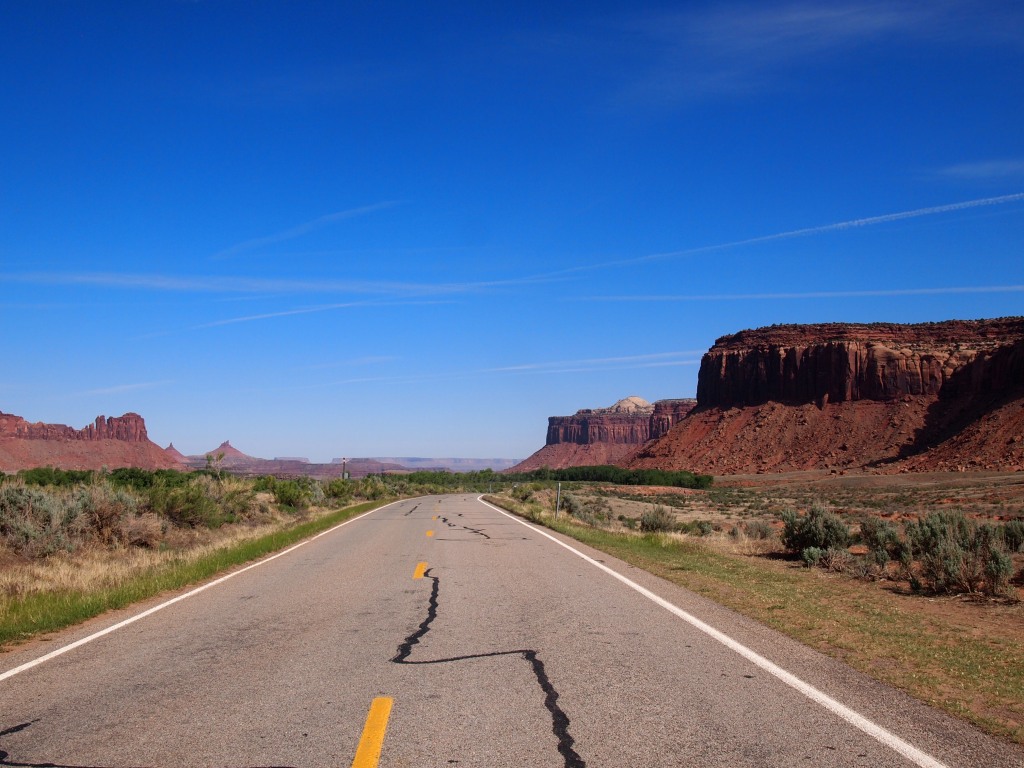 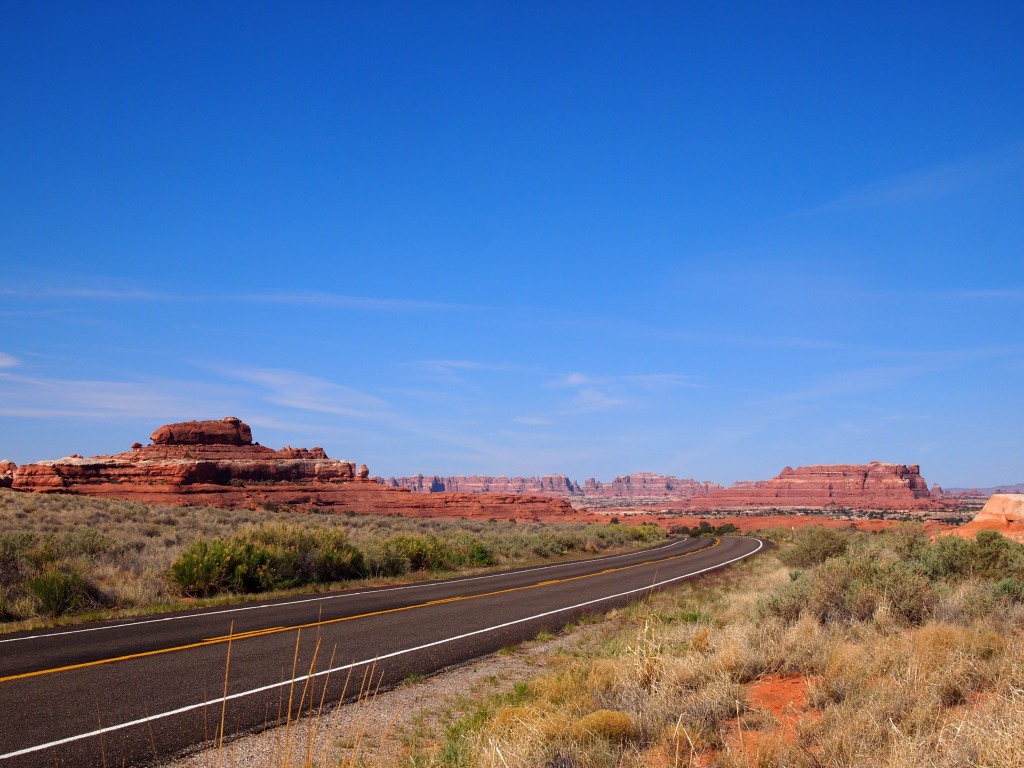 At the park boundary

I was a little skeptical about Cave Spring as the description on the trail map – “historic cowboy camp & prehistoric petroglyphs” – sounded boring. I was delightfully surprised by the hike; it was a nice little loop, and I was happy we did it. The first part took us by an abandoned cowboy camp – as promised – and the cave spring, the trail’s namesake. Much of the trail was under the overhanging lip of the rock, providing a nice shady respite from the sun. Some of the rock near the cave spring was etched with petroglyphs but the most surprising was the cluster of colorful hand prints. 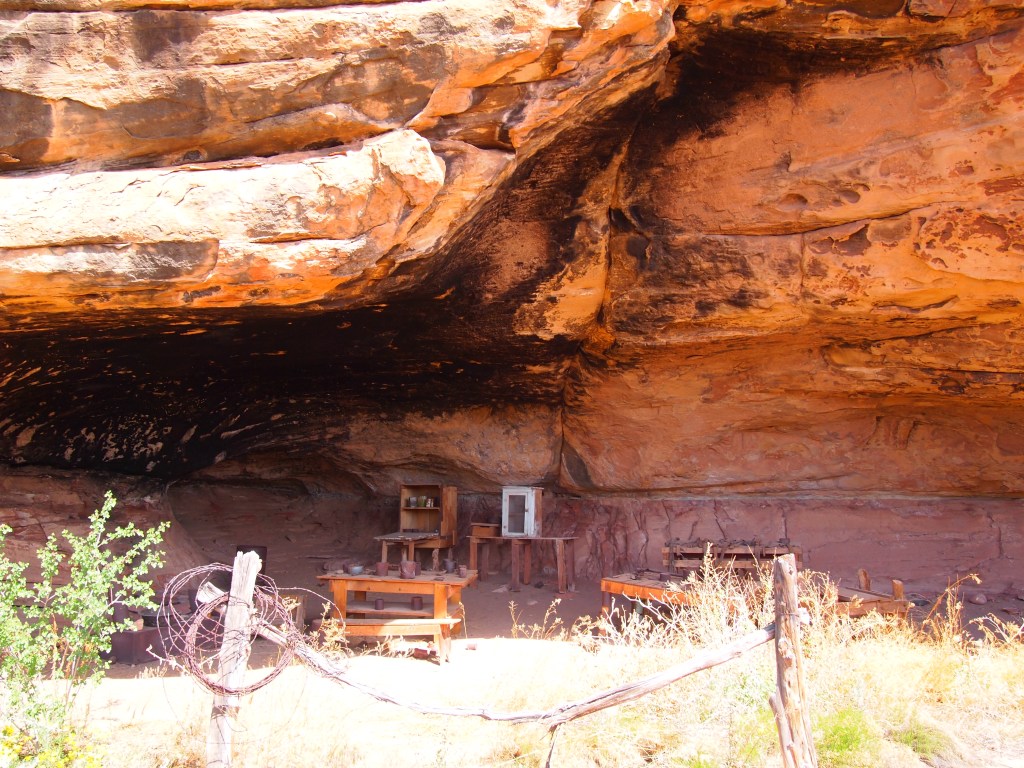 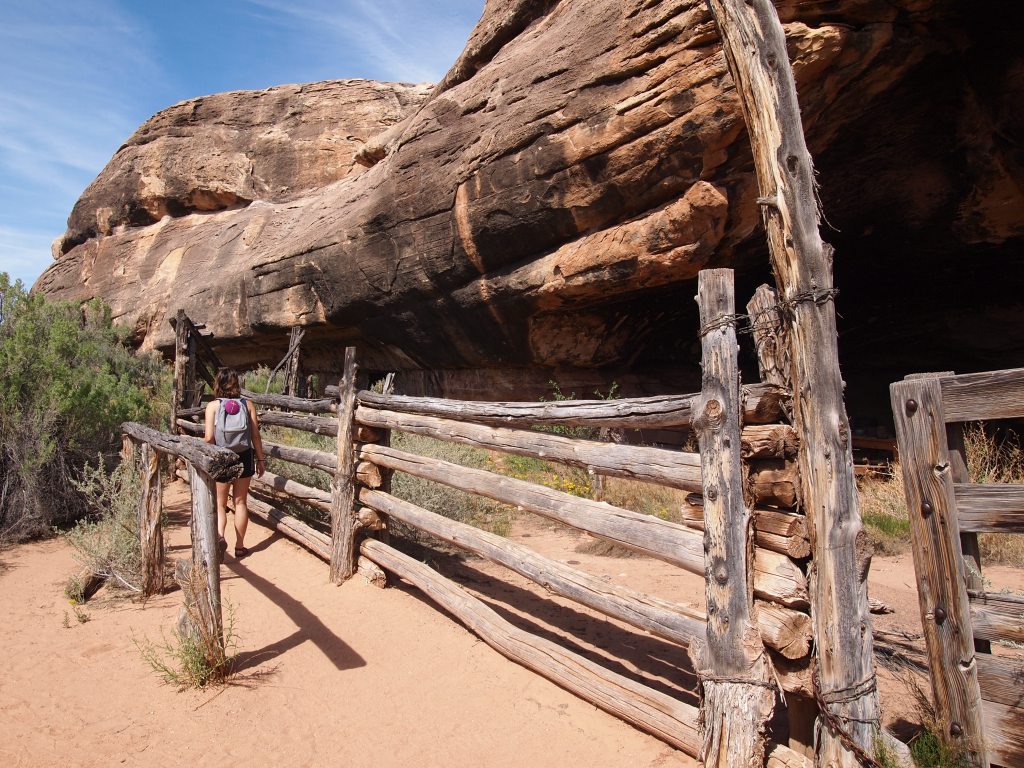 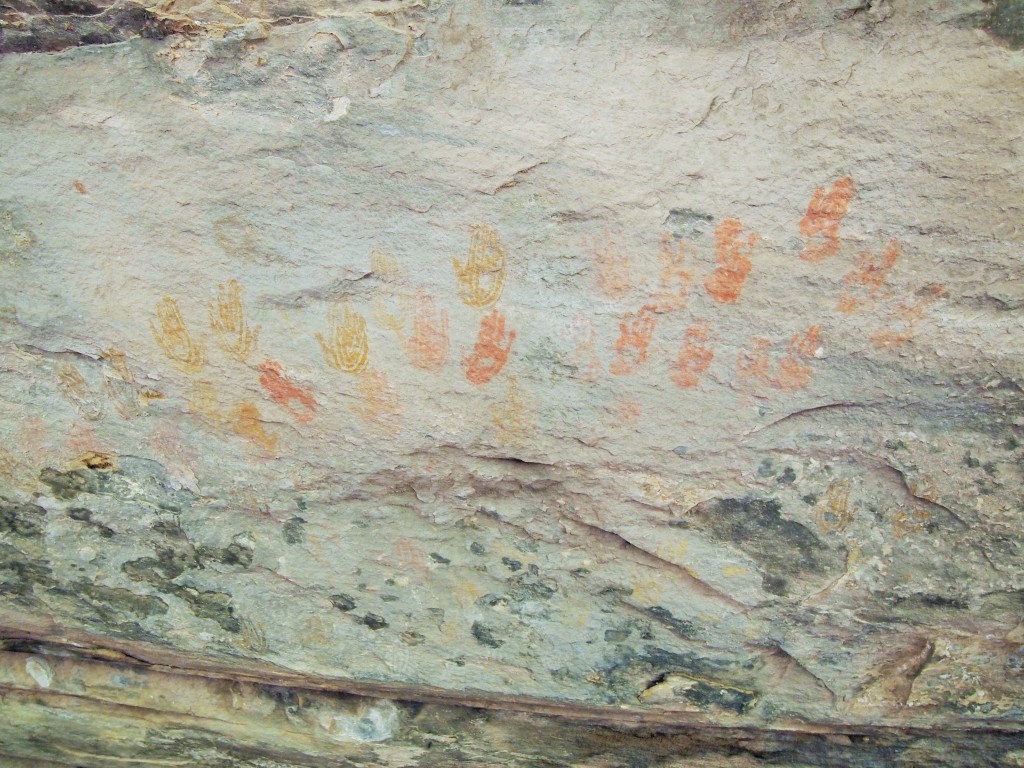 The next phase of the loop took us up two ladders to the top of the rock providing a wonderful 360° view. It was so unexpected that it really made the trail worth it. We followed cairns over the slickrock to loop around and eventually back down to the gravel trail. Since Cave Spring was south of the scenic drive, it gave us a different perspective of the district than the Slickrock Trail would further northwest. Other than the ladders, the trail was quite simple and could be done by anyone looking to get out of their car for a short adventure. 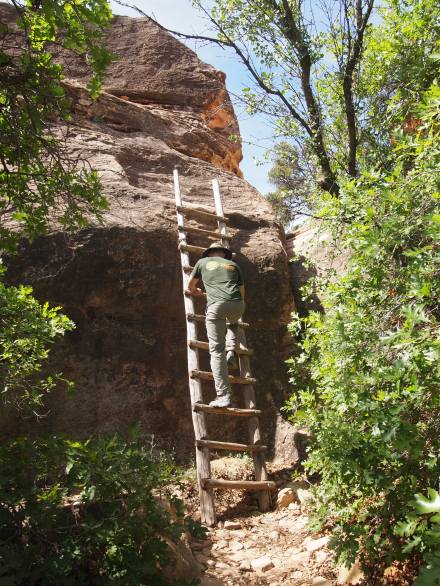 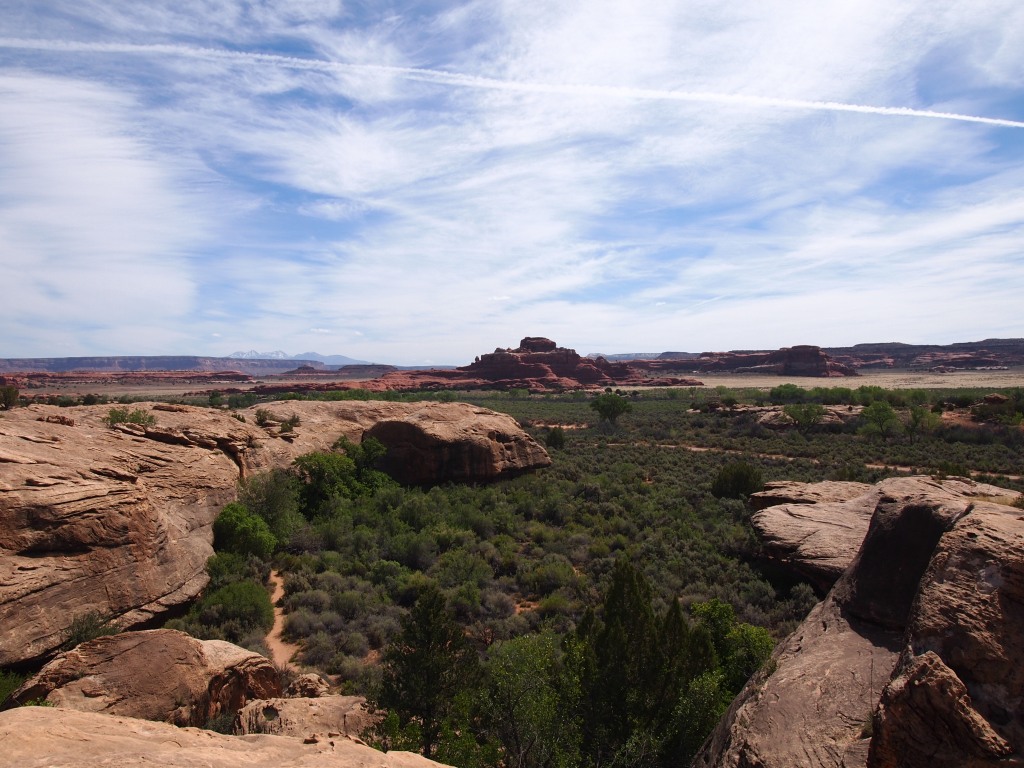 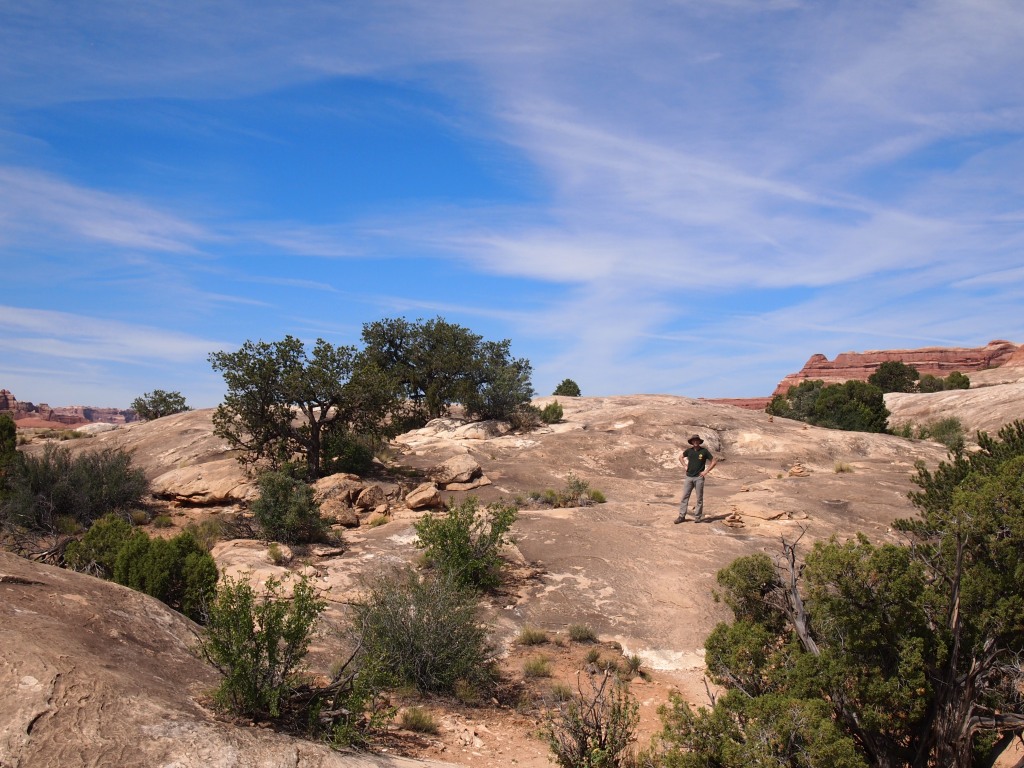 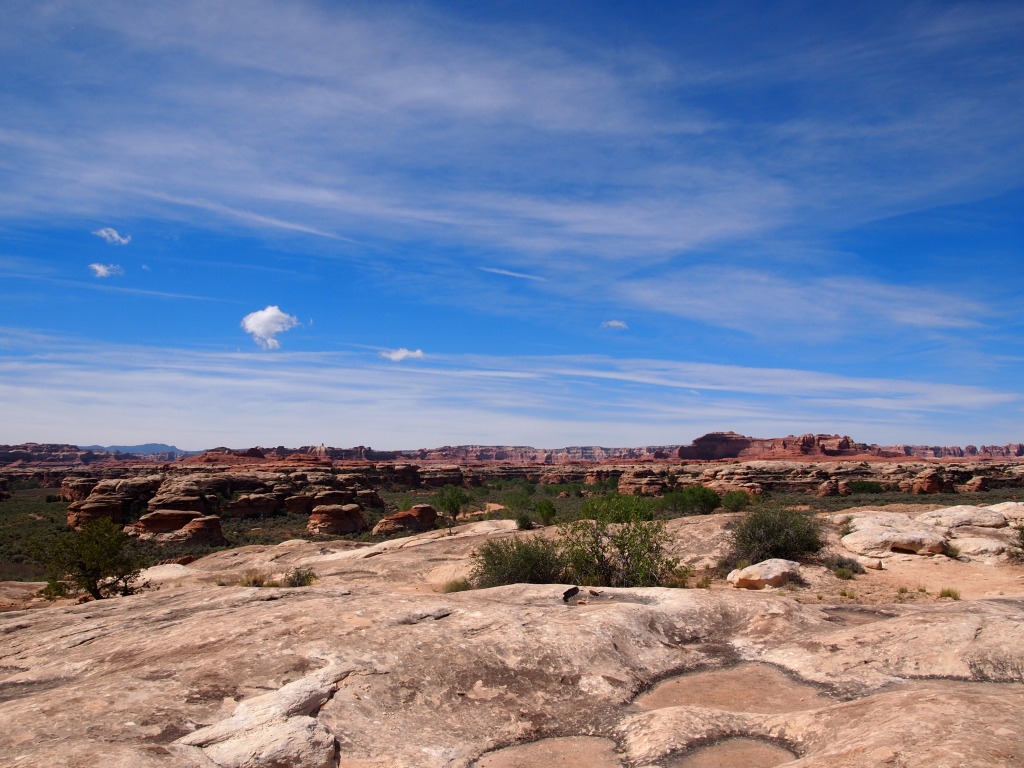 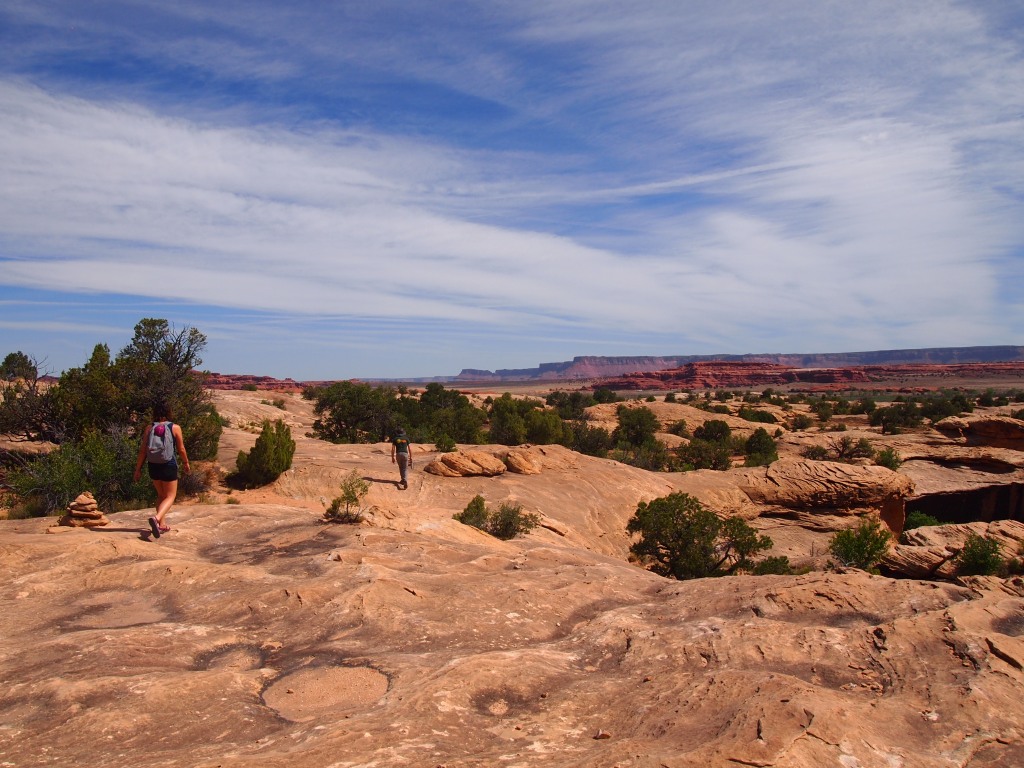 After Cave Spring we set out for the Slickrock trailhead at the end of the scenic drive. As you might guess from the name, the trail is all slickrock so it wouldn’t be wise to do it when wet or icy. It’s also completely exposed so a hot summer day would be pure misery on this trail. For us, the day couldn’t have been more perfect; the temperature was in the low 70s, the sun was out illuminating the rock, and the breeze kept us cool. There are 4 viewpoints along the Slickrock Trail and although they are all 360°, our best views were looking north toward Island in the Sky. We could spot the needle-like spires of the district to the south at the beginning of the hike but only faintly. Much of the trail follows the rim but in places where it doesn’t the viewpoints jut out to give hikers the best views over the canyons below. 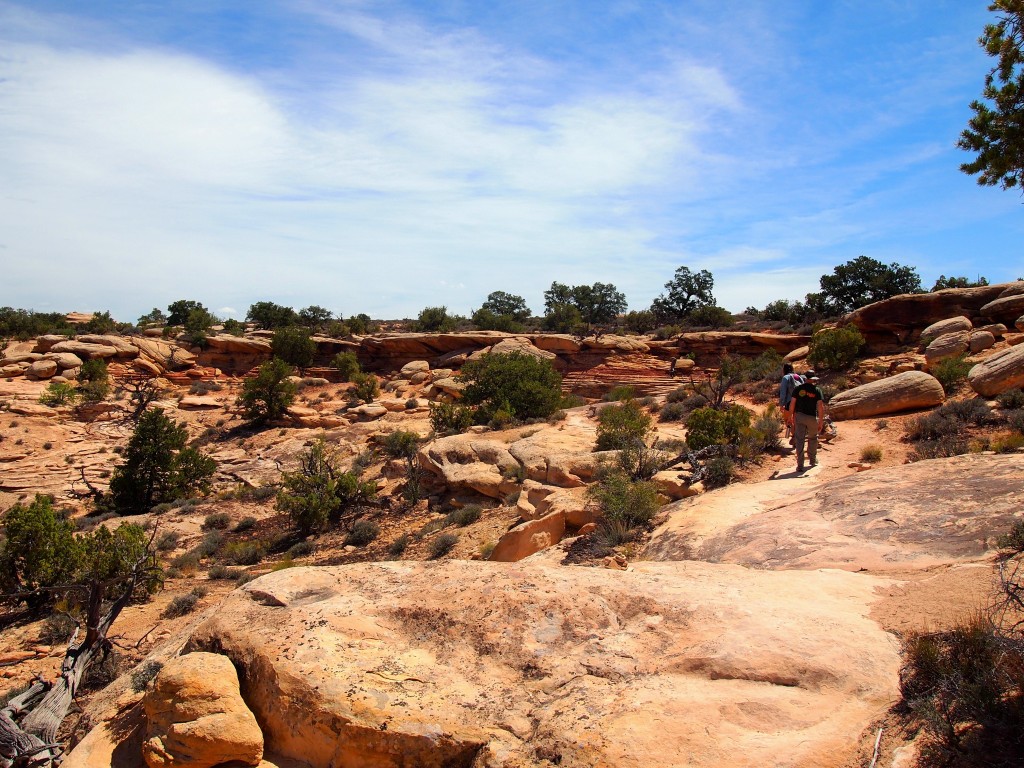 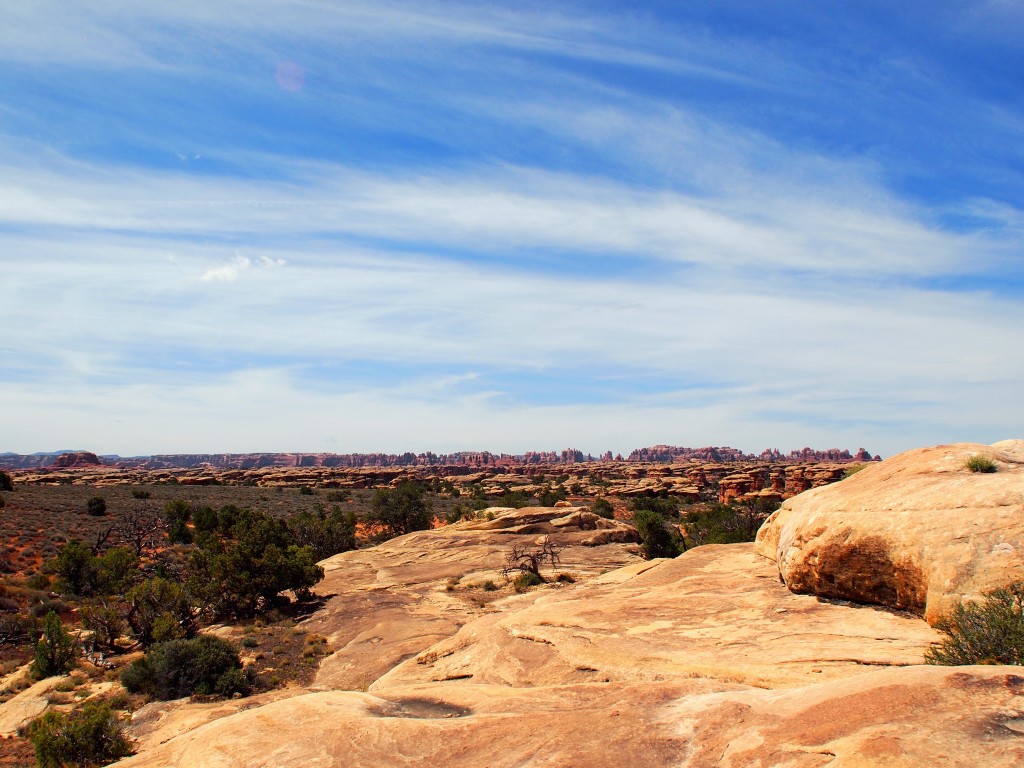 The Needles – the district’s namesake – to the south of us

Look for the other hikers on the left

The second viewpoint led us out to a rock ledge of sorts. It was wide but required a bit of scrambling to get up – I had the most trouble because I’m short. The view of Upper Little Spring Canyon was pretty spectacular from the top of the ledge though. For those who don’t want to scramble all the way to the end, there were incredible views midway down to the ledge. Though we didn’t spot any, this is where people often see bighorn sheep climbing along the canyon.

Pam, midway to the viewpoint 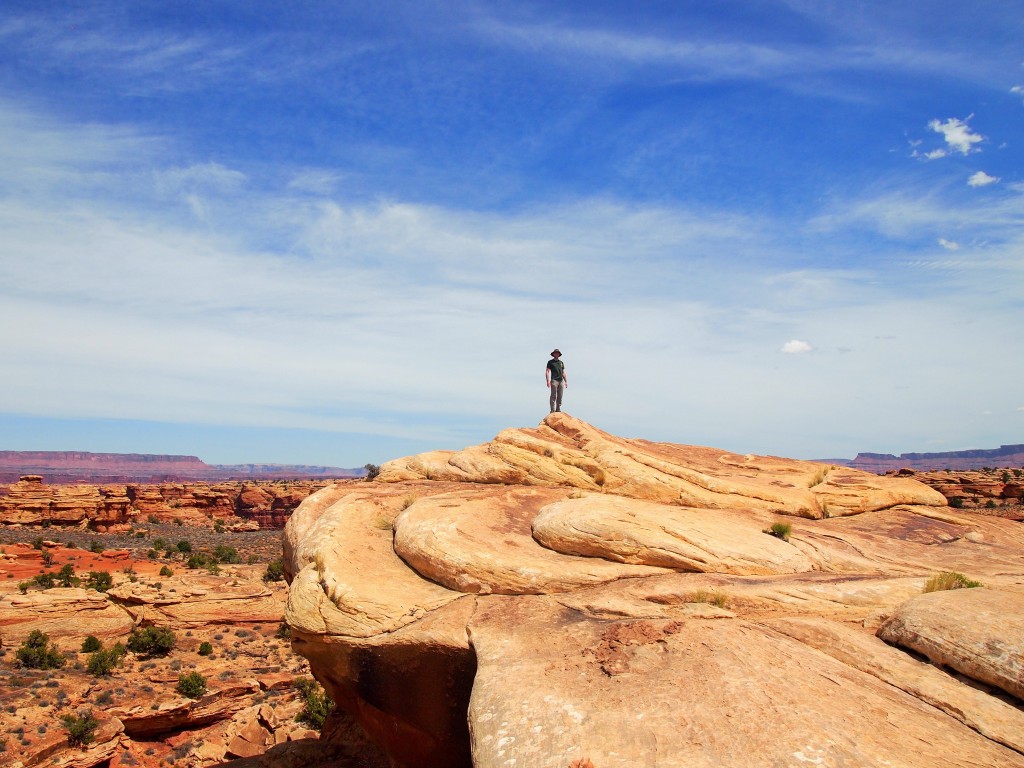 Zach at the pinnacle of Viewpoint #2

By the third viewpoint over Lower Little Spring Canyon, we could see our destination – Big Spring Canyon – a bit clearer. In the distance Island in the Sky is visible as well. At Viewpoint #4 over Big Spring Canyon we stopped to have a snack and hang out a bit before beginning the loop back around to the parking area. A giant raven hassled us for some food – we didn’t relent – and I thought about how terrible it would be to lose your balance standing on the edge. Breathtaking. 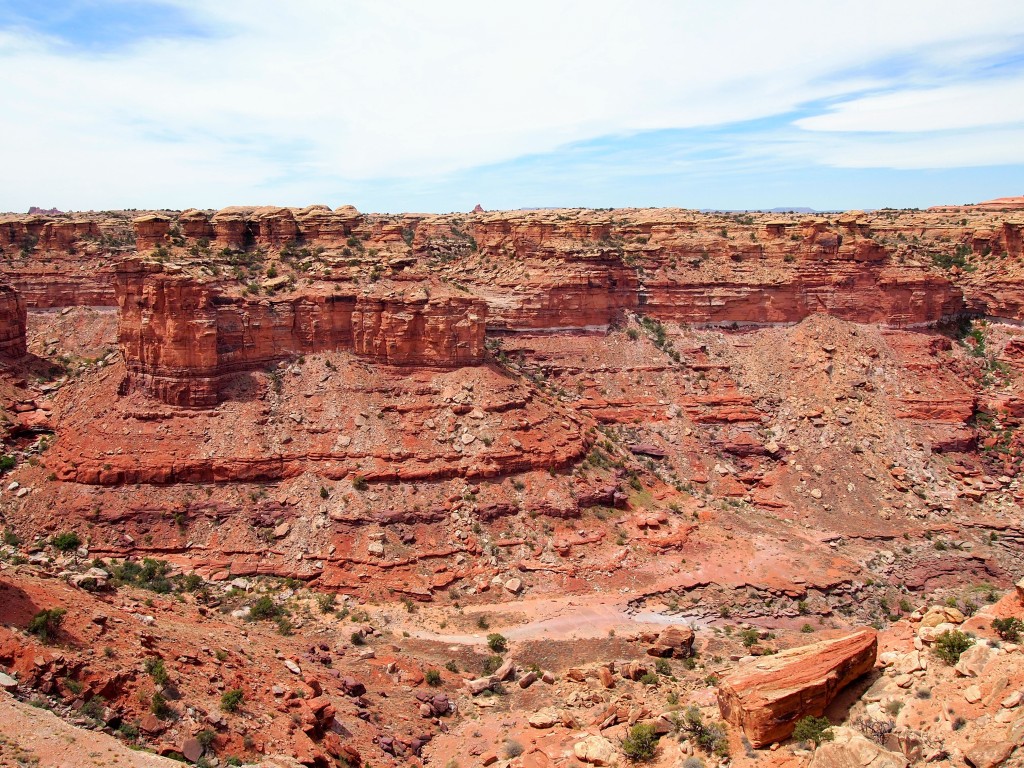 After our hike, all of our minds were on food. The previous day I’d made PB&Js to stick in my backpack and we’d scarfed them after the Tapestry Arch hike, but I hadn’t made them for Canyonlands, oops. We took a quick look at the Big Spring Canyon Overlook at the end of the scenic drive and then started the journey back to Moab. 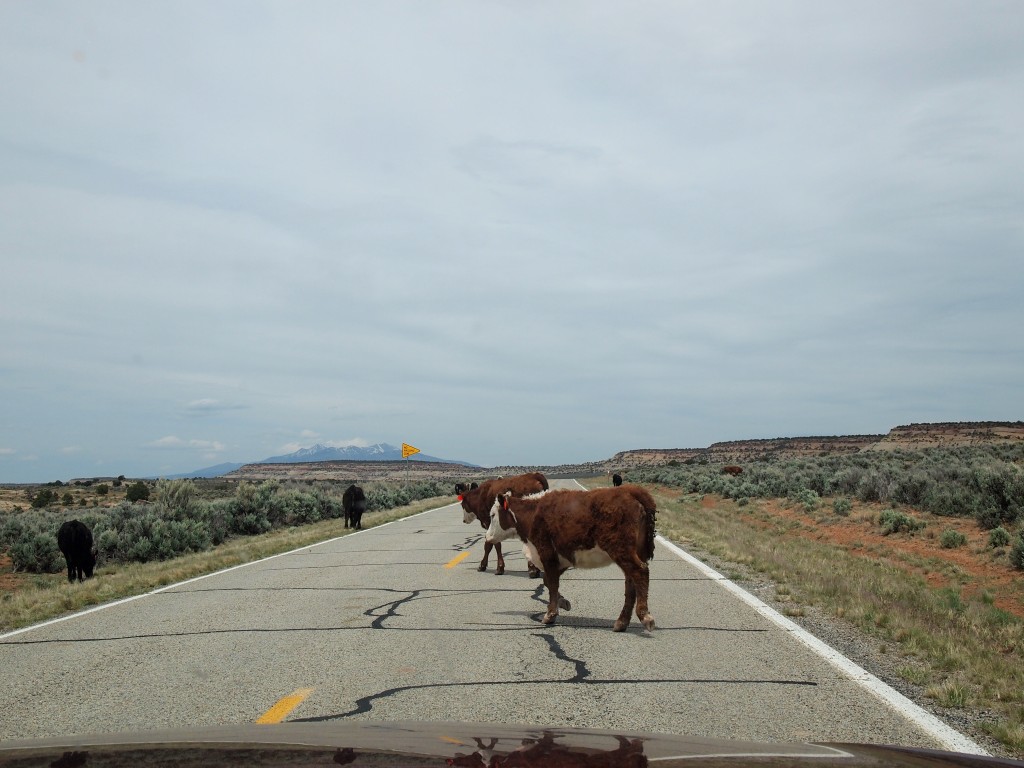 Cows slowing us down on UT 211

Back in Moab, we had some tasty food at Arches Thai and went back to relax with Tru – have a beer, take a walk, etc. Then we left again to squeeze in some of the overlooks at Island in the Sky before sunset. We were able to do the short loop hike to Mesa Arch and the overlooks at Grand View Point, Buck Canyon, and Green River before it became too dark. 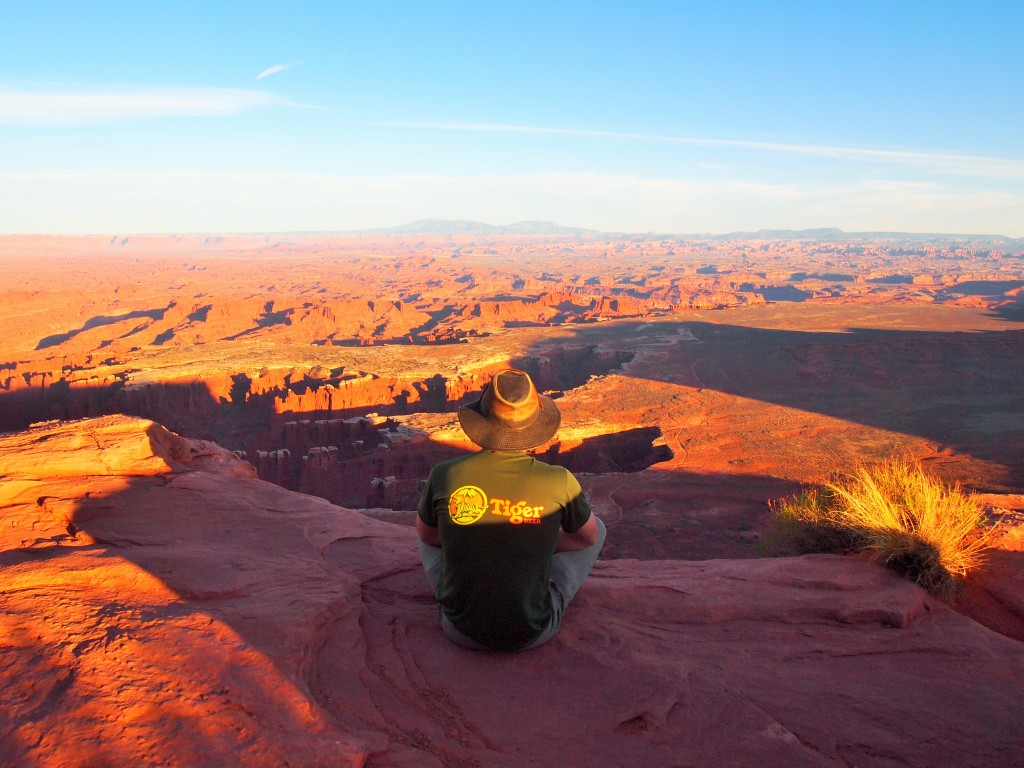