I’ve been procrastinating… Things have slowed down significantly for the semester, and I’ve relished in the general haze of sloth. But since we’re sticking around SLC for the holidays, I am forcing myself to sort through our Thanksgiving photos and write about our trip to southern Utah.

We’ve wanted to visit Zion National Park for quite some time, but I wasn’t interested in going during the summer when the hoards of tourists swamp the canyon. I thought that Thanksgiving might be a good alternative because it’s during the “off-season” and a major US holiday. Damn. I was wrong. Or right? I’m not entirely sure, but there were definitely more people than I thought there would be. Whether or not this was due to the exceptionally warm weather or a typical pattern, I won’t fully know. Suffice it to say, we were not the only ones with Zion in mind.

Of Utah’s five national parks, Zion is by far the most popular. Actually, it’s quickly becoming one of THE most popular national parks in the entire country. Zion surpassed Yellowstone in 2016 with 4,295,127 visitors. (As a point of comparison, Bryce Canyon was the second most visited NP in Utah with 2,365,110. Hardly a competition.) As a result, Zion Canyon, the park’s main canyon, is closed to personal traffic during its busiest season and other high volume periods – like Thanksgiving. I was reticent about the shuttle system – so far we haven’t visited a park that requires the use of shuttle – but I was pleasantly surprised by how much I liked it. I think my frustration levels would have been much higher without it.

Although Springdale is the closest place to stay outside of the park itself, I had trouble finding reasonably-priced, pet-friendly accommodations. So we ended up staying in an Airbnb in Kanab and planned on doing some hiking/exploring outside of the park. This was a fortuitous decision. The only road into Zion from Springdale was under construction and created long delays. Since we entered/exited the park from the east entrance, we never had to deal with long lines. It also meant we didn’t branch out from the main canyon, but hopefully we can do that on our next visit.

We spotted some bighorn sheep off the side of the road

One of two tunnels on the east side of the park

Even though I didn’t think there would be crowds of people on Thanksgiving Day, I still wanted to get an early start. We arrived at 8:30am and had no trouble finding a parking spot – though we later heard that parking filled up by 10am. It was pretty cold so we layered up and went to stand in line for the shuttle. There were definitely more people than I expected but the line moved quickly and we were at the trailhead for our first hike, Angel’s Landing, by 9:30am. I had hoped to start earlier, but that’s life. There were definitely a lot of people already on the trail and my visions of a near-empty Thanksgiving hike quickly vanished. However, since Zach and I hike at a fairly quick pace, we were usually able to get ahead of some of the slower, larger groups.

The first section of the hike took us up a set of switchbacks on our way to Refrigerator Canyon. We quickly warmed up and shed our outer layers. I knew that it would be a steep climb, so I used my hiking poles for the initial climb which really helped my knees for the rest of the hike. (Our hike to Frary Peak the previous weekend had also conditioned us for the 1,500 ft. elevation gain.) To climb out of Refrigerator Canyon to Scout’s Lookout, we encountered an iconic section of the trail, Walter’s Wiggles, a series of switchbacks built by the CCC that feel never-ending. Once at the top, we took a snack break before starting up the final/main portion of the hike.

Angel’s Landing – our destination – is on the left

Almost immediately, the trail climbs up this impressive hunk of sandstone to Refrigerator Canyon

An aerial view of the first set of switchbacks

At the bottom of Walter’s Wiggles

Somehow I managed to snap a photo in a lull

Angel’s Landing is probably the most well-known and most hiked trail in Zion. I read ALL about it before we left for the weekend, and I was pretty nervous. The final half mile follows the spine of the mountain to the final viewpoint. At times there are sheer 1,000 foot drop-offs and little room for error, and there have been a handful of deaths over the past decade. But there was no reason for me to be nervous; Zach and I are experienced hikers (as he kept reminding me). There wasn’t ever a point at which I felt uncomfortable or afraid. However, there were plenty of people who probably should have been more cautious or not done the hike at all. There are chains to help aid hikers, but they do not follow the entire length of the trail; there are a few areas which require some scrambling and definitely decent balance. If you are remotely afraid of heights, stop at Scout’s Lookout. We passed one person who was visibly shaken and near tears – don’t put yourself through that stress! Hiking is supposed to be enjoyable.

This section of the trail is narrow and often only has room for one-way traffic, so there were several periods at which we had to stop and let others pass by. Even though there were a lot of people, the mood was light and courteous. However, the amount of people hiking Angel’s Landing is probably at the point at which the Park Service should institute a permit system (similar to Half Dome at Yosemite). It would give those with a permit a better, more fulfilling experience and decrease potential accidents due to overcrowding.

The very beginning was the most crowded 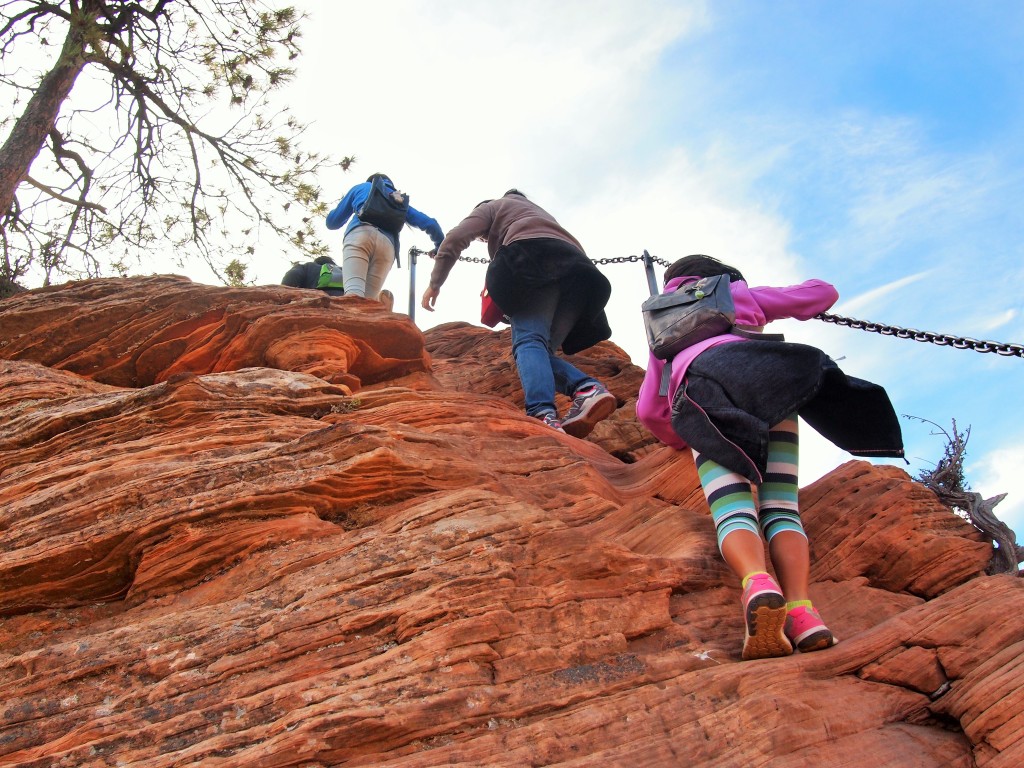 The top viewpoint was the portion of the trail that bothered me the most (Zach not at all, duh). But I overcame that fear, mostly, and we took in the stunning views on all sides. It was spectacular. 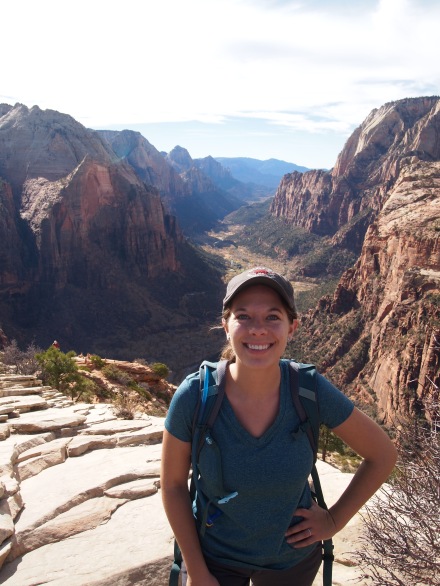 The iconic view from Angel’s Landing of Zion Canyon (south)

The equally stunning view of Zion Canyon to the north

Big Bend and the Organ below 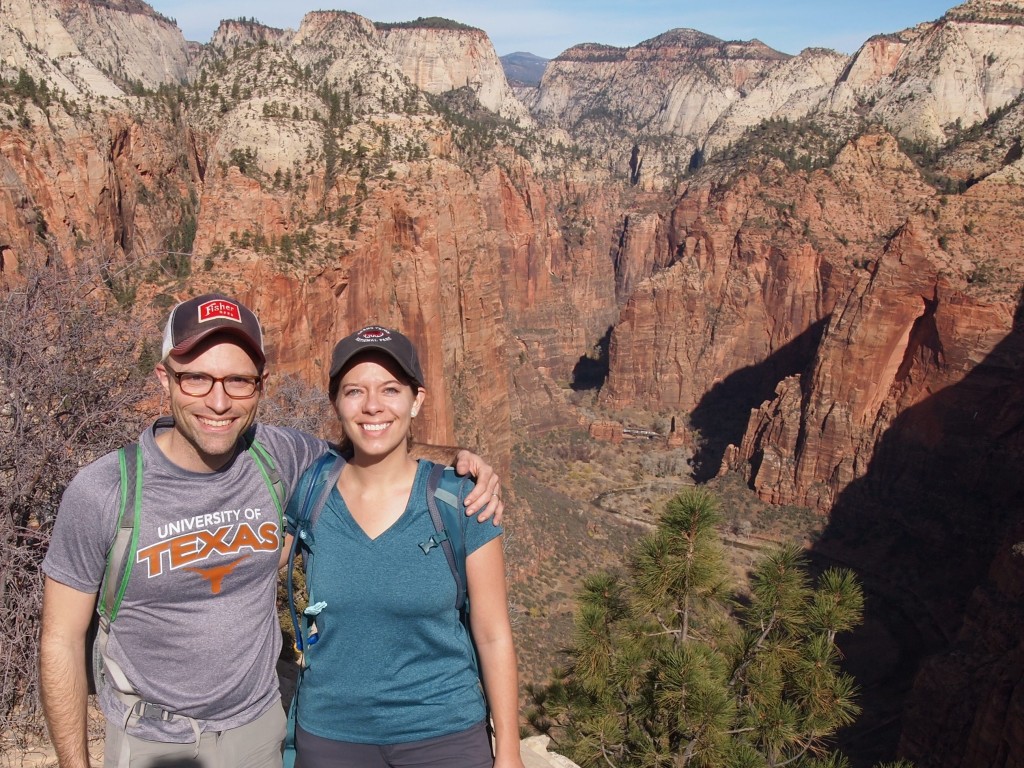 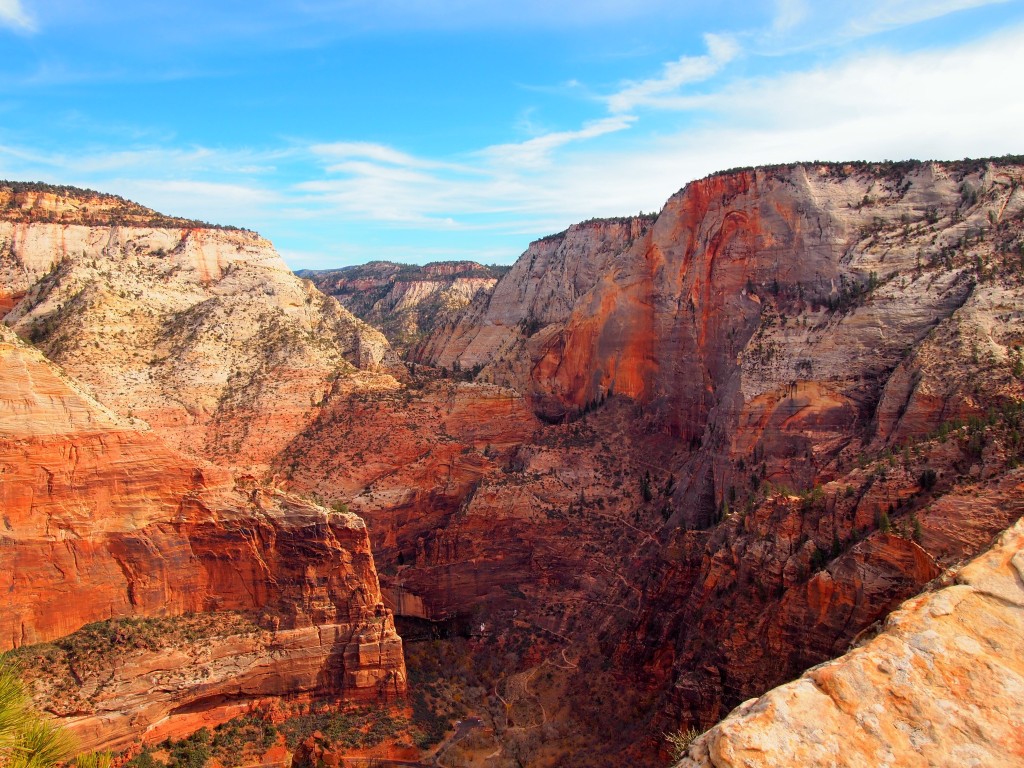 Echo Canyon & the Great White Throne to the east

I thought the descent would be worse because you’re essentially forced to look down, but it wasn’t bad at all. There were far more people making their way up though; I’m glad we started the hike when we did. We ended up behind someone who blazed through the descent, so we made pretty decent time getting back to Scout’s Lookout. From there, it was smooth sailing back to the trailhead. 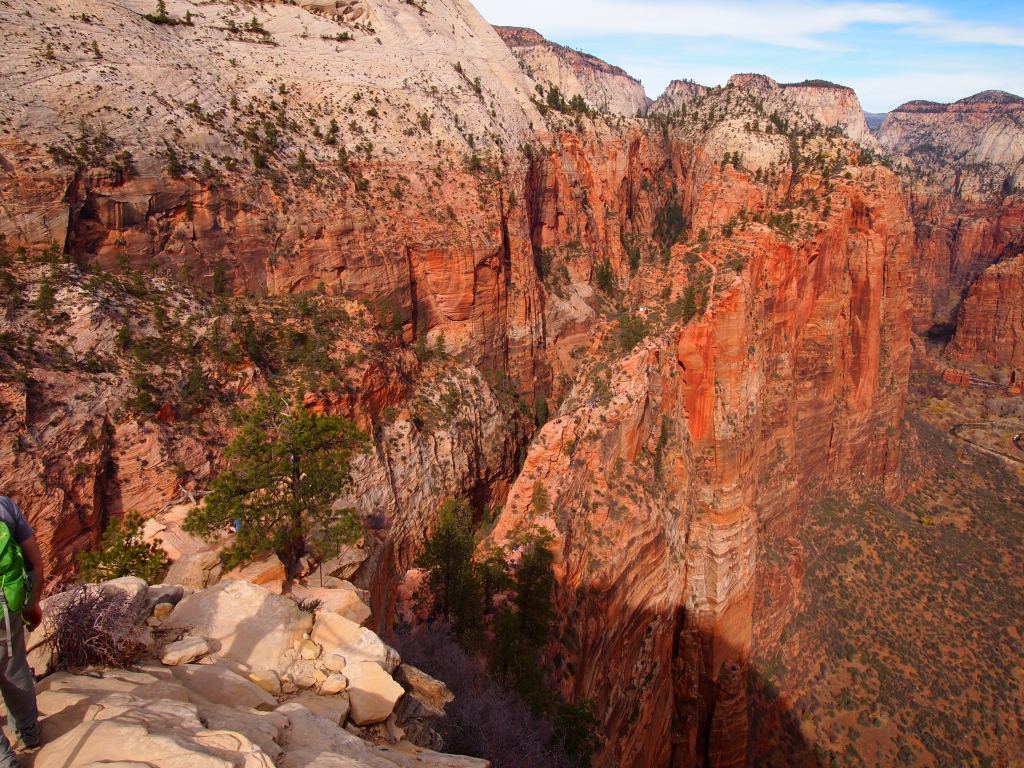 From here, you can see the spine we hiked – it looks so thin!

Looking back at the final portion of the spine

After our hike to Angel’s Landing, we hopped back on the shuttle and rode it to the end, the Temple of Sinawava. Here, Zion Canyon essentially ends. As the canyon walls close in around the Virgin River, any pathway is eliminated leaving only the river. This part of the canyon is known as The Narrows and it’s another popular hallmark of the park. Hikers use the river as their path and follow it as it weaves through the increasingly narrow canyon walls. Though we weren’t prepared to do The Narrows, we decided to do the Riverside Walk, a short one mile stroll which dead-ends at the Virgin River and the beginning of The Narrows hike. Since it’s an easy, mostly level path and it was Thanksgiving, there were lots of families out and about enjoying the afternoon. It was a pleasant walk with beautiful views, and we took the opportunity to sit by the river and eat our lunch as well. 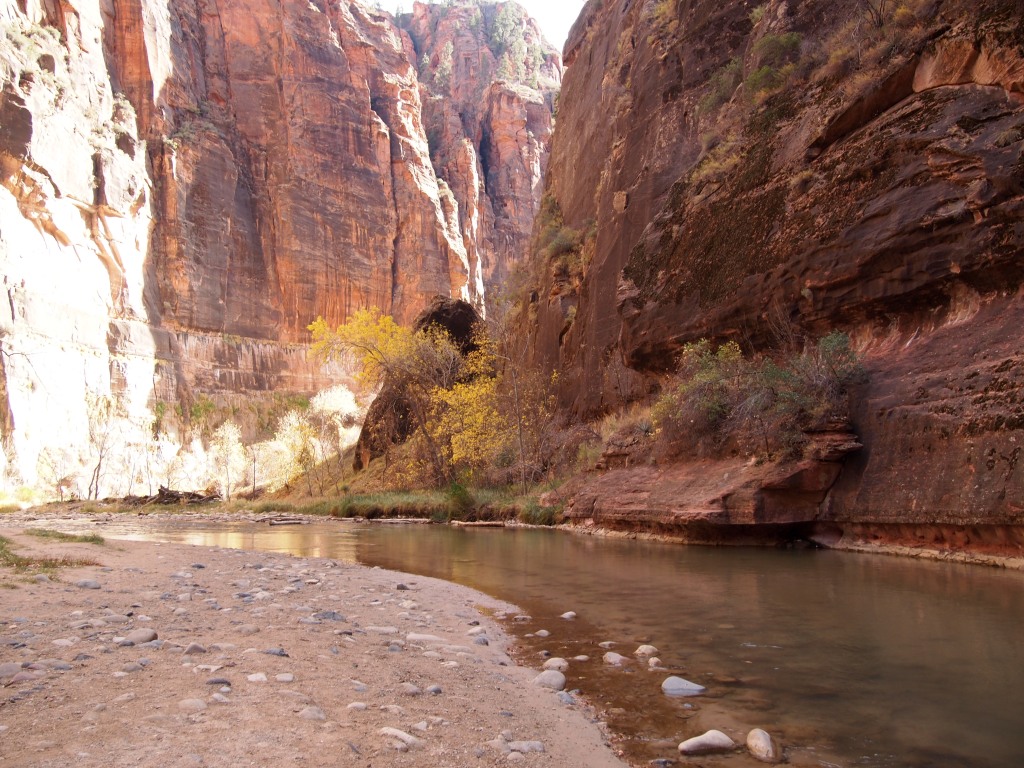 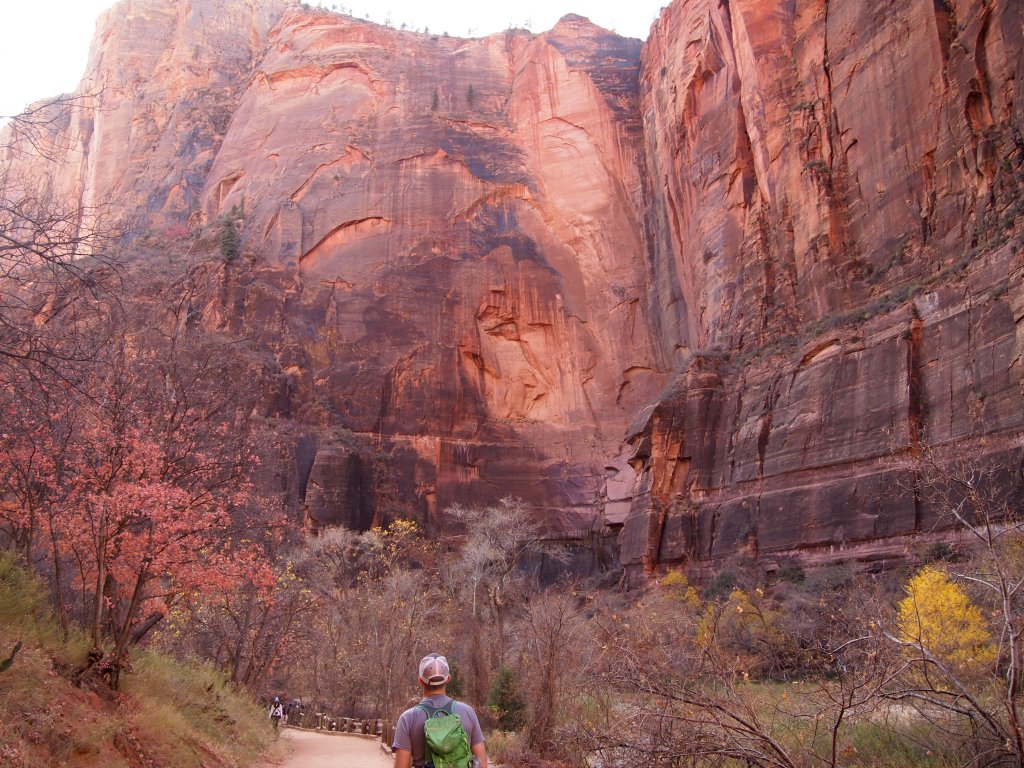 It was mid-afternoon when we finished the Riverside Walk. We hopped back on the shuttle to return to the Visitor Center, but made one brief detour at Court of the Patriarchs. At this shuttle stop a short, but steep, path led to a view of three peaks named Abraham, Isaac, and Jacob by a Methodist minister. It was definitely worth the stop as the vantage from the road alone doesn’t quite do it justice.

Court of the Patriarchs – Abraham, Isaac, Jacob (L to R)

Once back at the Visitor Center – and after a visit to the park gift shop – we traded the shuttle for our car and headed out of the park via the Zion-Mt. Carmel Highway. One of the coolest features of the highway is the Zion-Mt. Carmel Tunnel, a 1.1 mile long tunnel chiseled into the sandstone which connects Zion Canyon with the east side of the park. Built in the late 1920s, the tunnel isn’t particularly wide but does support two lanes of traffic. Though larger vehicles (campers, RVs, buses, etc.) don’t fit in a single lane and have to pay a fee in order to travel in the center of the road. The tunnel was pretty incredible, but difficult to photograph.

I wanted to do one more short hike to round out the day, but we missed the parking lot (already quite small) and couldn’t find a suitable place to turn around. Since the upper east canyon isn’t part of the shuttle system, there was a considerable amount of human and car traffic. It had already been a long day and the hassle of finding a parking spot wasn’t something I wanted to pursue. So, we enjoyed our final glimpses of the park and decided we’d come back on Saturday.

The Watchman looks over the Visitor Center and campgrounds

Winding up the switchbacks to the Zion-Mt. Carmel Tunnel

Cruising through the slickrock of the upper east canyon