On Friday we decided to take a break from Zion. I did quite a bit of research before we left SLC and came up with what I thought would be a reasonable day-long excursion. We’d follow Highway 89 East, stopping to do a hike here, a hike there, and then end the day in Page, Arizona with Horseshoe Bend.

We started the day with a trip to the GSENM Visitor Center in Kanab thinking we might attempt to win the lottery for permits to The Wave for Saturday or Sunday. One look at the parking lot changed my mind. It was insane. Only ten walk-up permits are granted each day (another ten are awarded through an online lottery), and there were at least a 100 people waiting in line to sign up. I think Zach would have been willing to stick it out and try, but I wasn’t. I have to be in the right frame of mind for that kind of thing. We grabbed coffee and pastries in town and went back to pick up Tru so we could get out to our first destination, Wire Pass.

Wire Pass is located in the Paria Canyon-Vermilion Cliffs Wilderness Area near the Arizona border. It’s often used to reach Buckskin Gulch, the longest, deepest slot canyon in the Southwest, but makes for a nice day hike in itself. The trail is 3.4 miles RT, but can be extended by hiking a little bit of Buckskin Gulch. We turned it into a 5.2 mile hike RT for the perfect morning hike.

It’s a gorgeous drive to the trailhead

This hike was my favorite of the entire trip. Even though it was the day after Thanksgiving, we got an early enough start that there weren’t many people ahead/behind us. As we left, there were more large family groups heading into the canyon. We felt like we had timed it just right. There is a fee for the hike; $6 per person & dog. This was the first time we’ve had to pay a fee for Truman!

Warming up with some whiskey

The Dive, a slickrock butte

*As with all slot canyons, it is imperative to check the weather for the entire region before hiking. Flash floods are a real threat and should be taken very seriously.

The entire hike is in a wash, so it’s incredibly easy to navigate. It was a little over a mile before we reach the first true slot. Almost immediately, we encountered the only obstacle of the hike: an eight foot drop with a makeshift driftwood ladder.  There were two women and a boy in front of us, and they helped me place my feet so I could get down first. Then Zach lowered Tru in his pack and followed. It wasn’t too treacherous, but it does present a challenge. It’s the only reason this hike wouldn’t be easy for just anybody. We left Tru in his pack for the duration of the slots; it’s easier to carry him than pick him up at every large boulder. We don’t want him to hurt his back because he catapulted over a giant boulder! 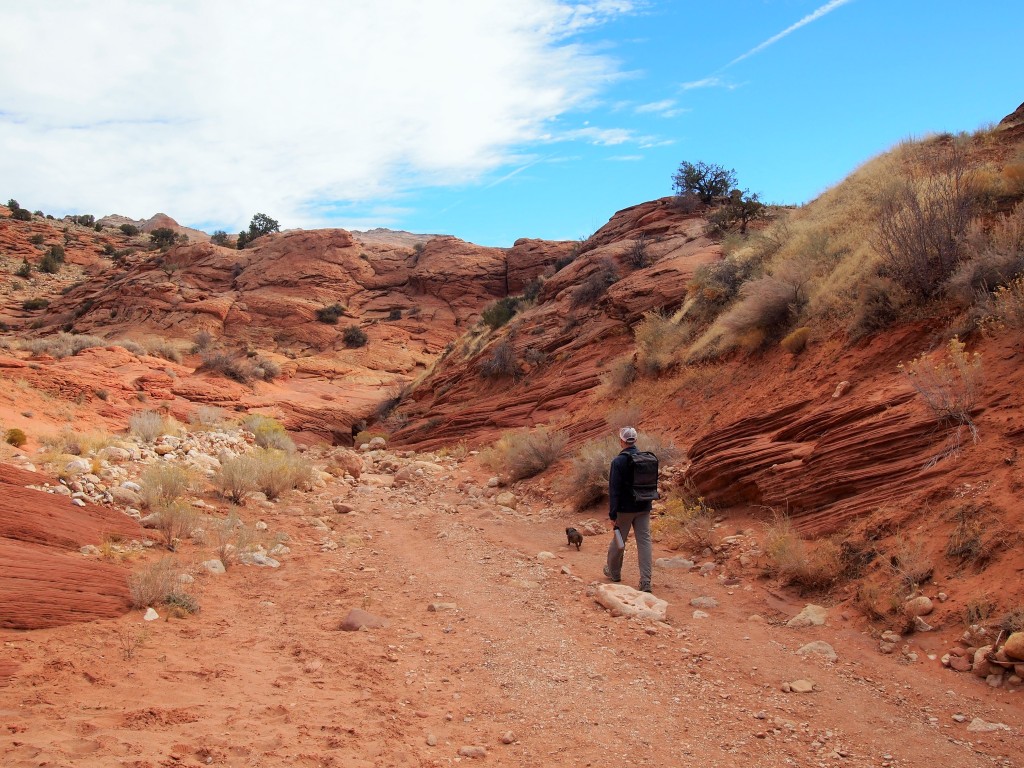 It seems as though the wash is disappearing 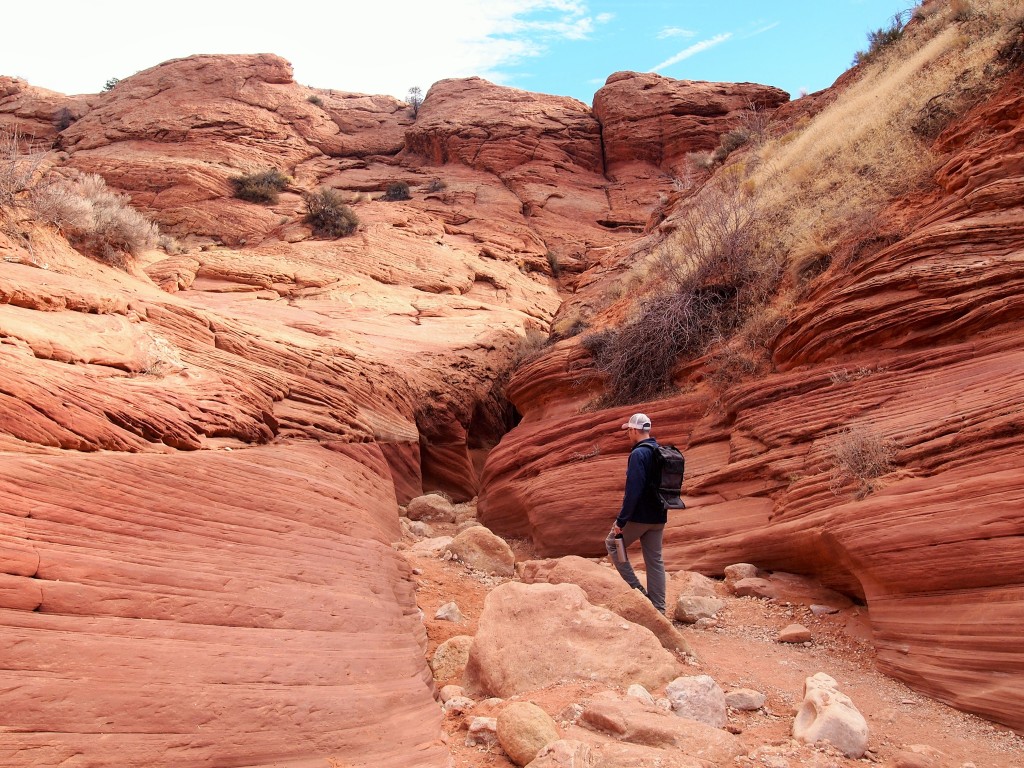 The entrance to the first slot 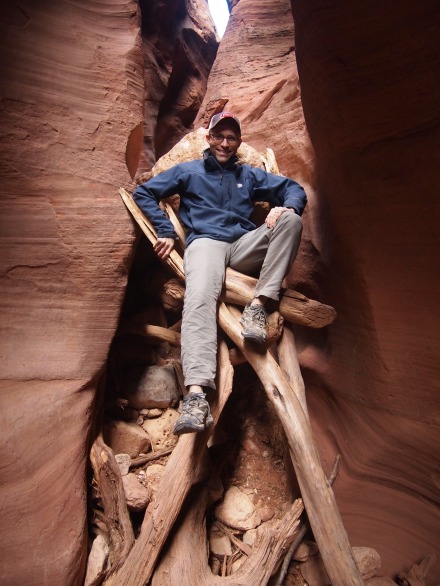 Zach poses on the ladder 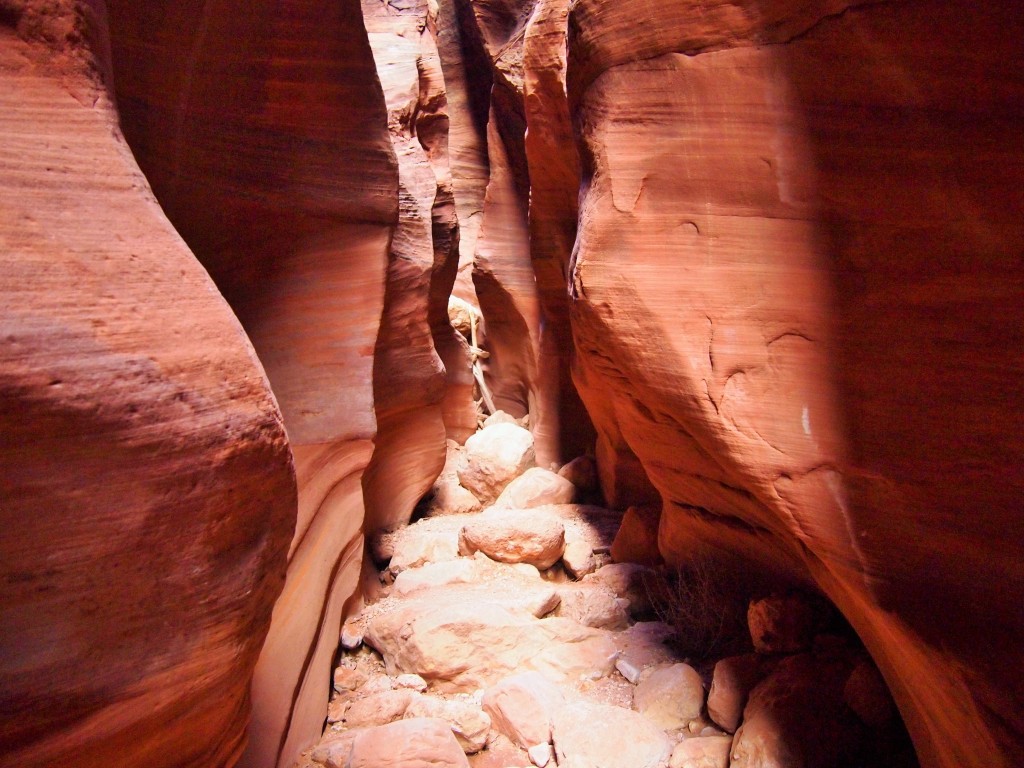 Lots of boulders at the beginning of the first slot 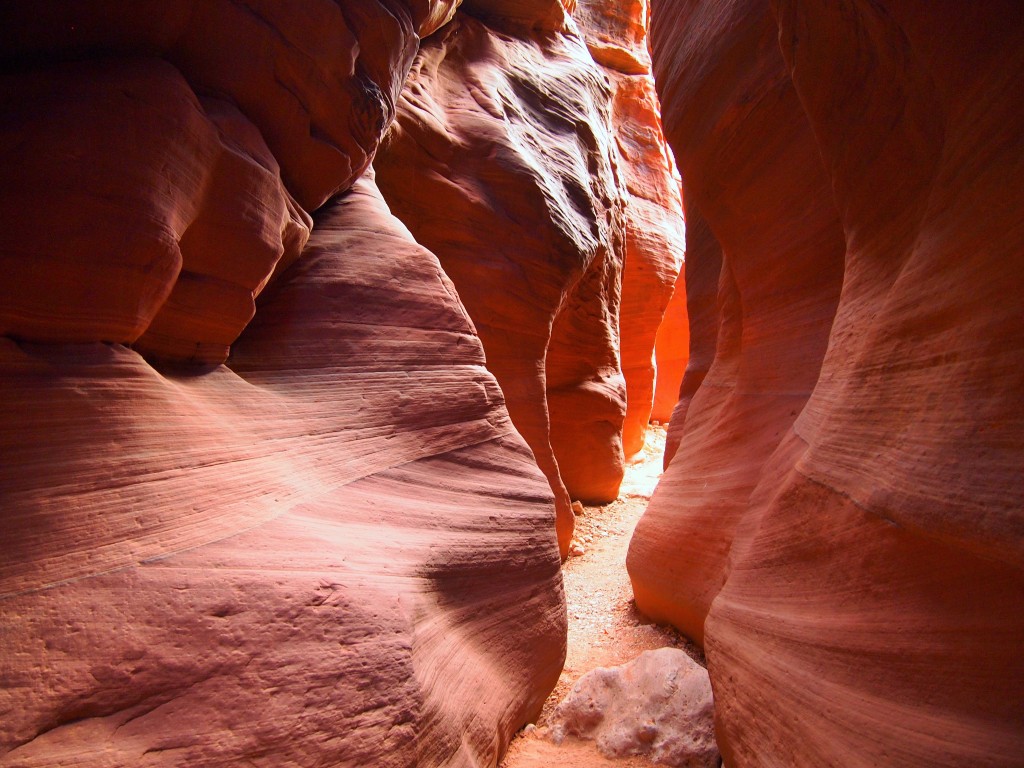 There were three sets of slots, and the first was the longest and my personal favorite. I thought it was the most beautiful of the three. But the second set of slots photographed the best for the time of day, so go figure. It’s all magical while you’re in it, and I enjoyed every second of it. Plus, we had the slots to ourselves. It was very different from our hike through Little Wild Horse; we certainly saw other hikers, but never felt rushed or crowded in the slots themselves. It was a very peaceful hike. 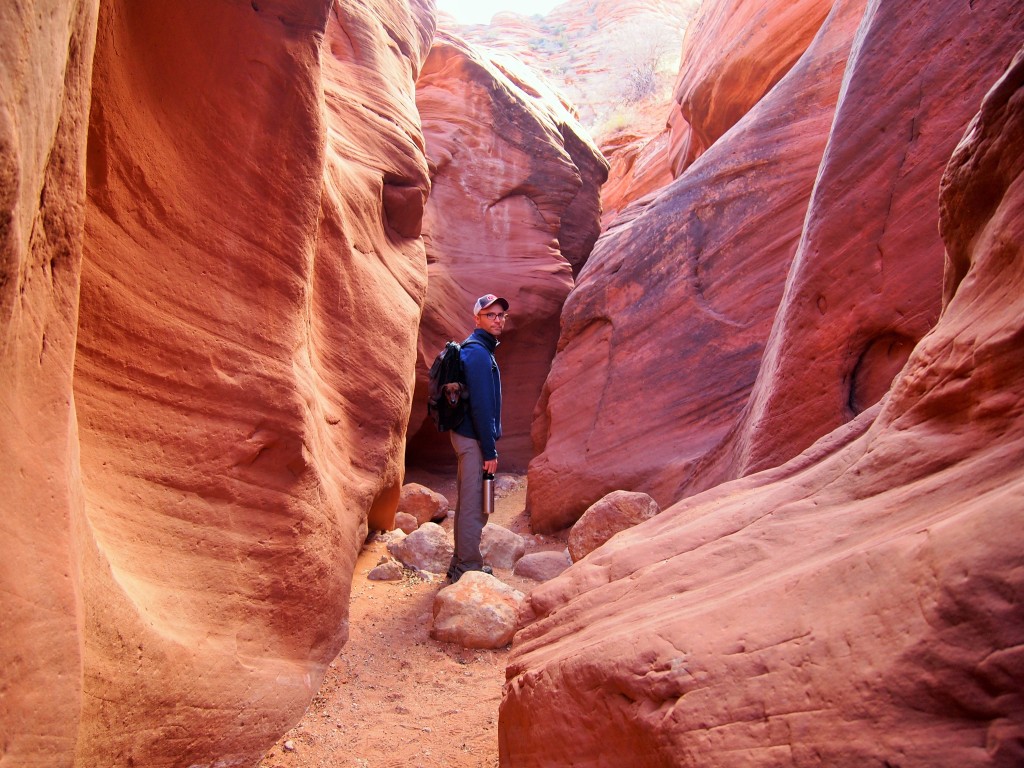 The thinnest portion of the hike! 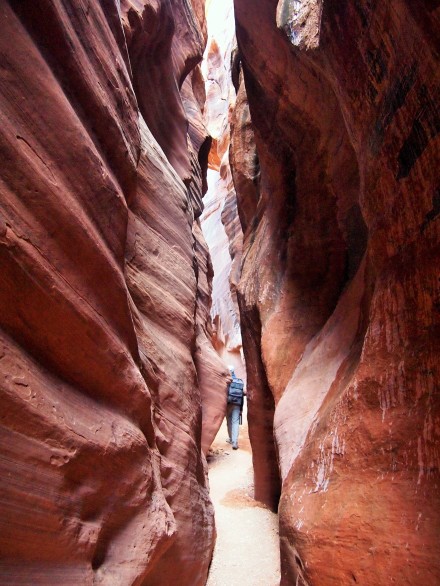 At the end of the pass, there was a large alcove with petroglyphs carved into the rock and then we were met with Buckskin Gulch. We decided to hike north into the gulch for a little while. The sand in the gulch was much deeper – and for whatever reason – Truman loves this. (It’s why he loves sand dunes and the beach.) We thought we would let him walk off leash in the gulch, and as soon as we did, he took off in a dead sprint. That’ll teach us. Once we reached the next opening in the canyon, we turned back toward Wire Pass.

The end of Wire Pass 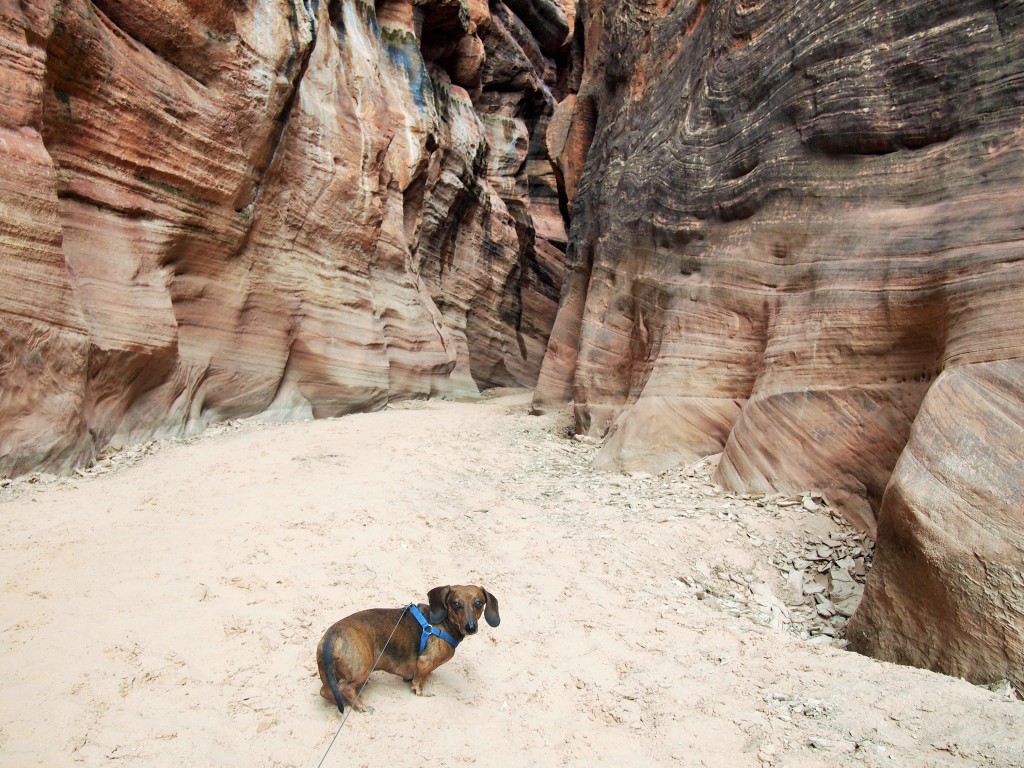 Our faces are a little bright, but it’s alright!

At the end of the pass, we back-tracked through the slots to the open wash, and finally to the car. Tru slowed down quite a bit (even though he got to ride through the slots!), but he made it. We rested and had some snacks and then continued on to our next destination, Toadstools. 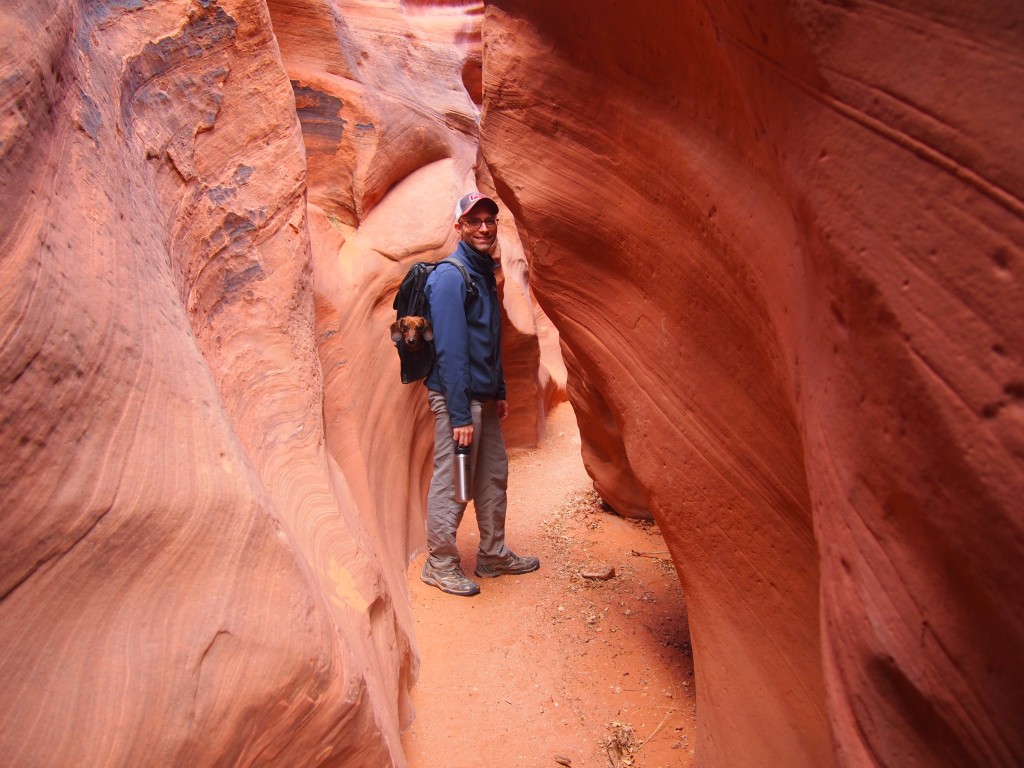 Tru was worn out by the end