Last winter we may have hibernated a little more than we should have. This year it’s my goal to get outside more often. I even asked my parents for Christmas snowshoes to incentivize more winter excursions. Sadly, the snowfall has been pretty minimal this year, so we may not get to use them as often as I’d hoped. A lack of snowfall doesn’t bode well for the city’s watershed or a lush summer either. However, it has made it a little easier to get outside instead of staying under the comfort of blankets.

While we have tested out our snowshoes and gone on another short hike on Antelope Island, this is a hike I’ve had in mind for over a year now. It’s accessible year-round, but far more crowded in the summer. The main drawback to this trail in the winter is the added length. Since the winter gate cuts off vehicle traffic ahead of the trailhead, an additional four miles makes the hike six miles – one way. We talked about doing this hike two other days before finally getting up early enough on New Year’s Day.

We arrived at the winter gate and began our hike around 9:40am. It was 16 degrees outside, and I was initially concerned because I’d worn my lighter down jacket. At first much of the road was in the shade and it remained very cold. But the portions in the sun quickly warmed us back up. I had been dreading the four extra miles on the road, but it was actually a wonderfully serene walk. The road snaked alongside the Diamond Fork and we were alone for almost the entirety of the walk. I was hoping we could do the first four miles in under two hours. We made it to the trailhead in one!

Getting started in the cold 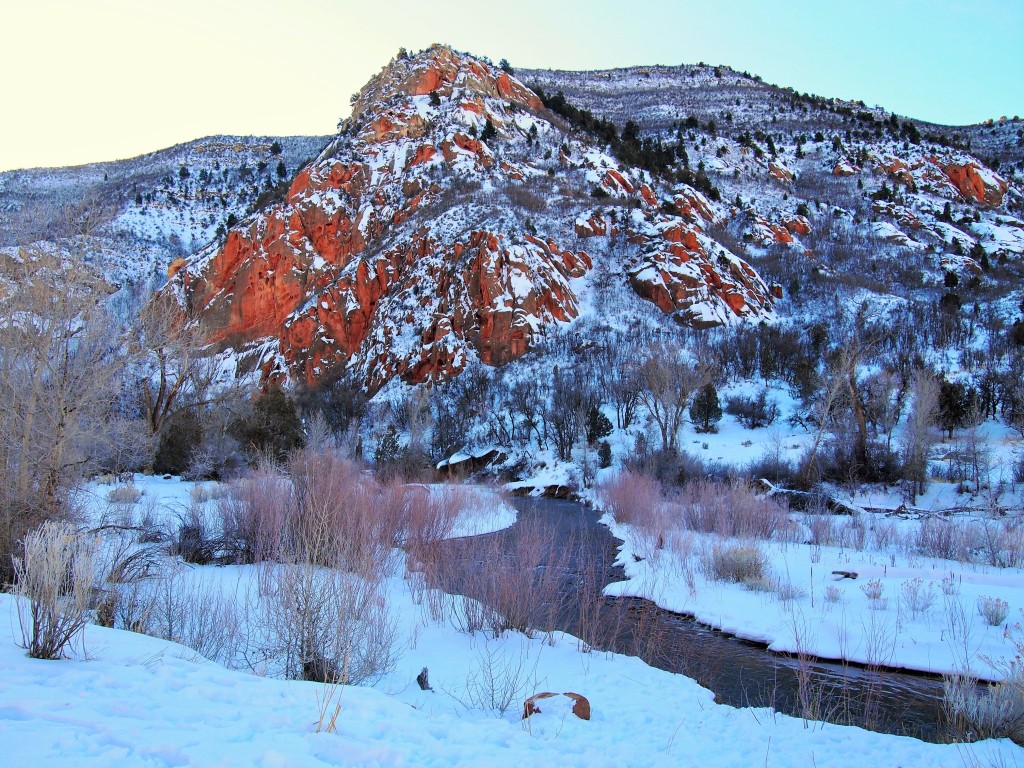 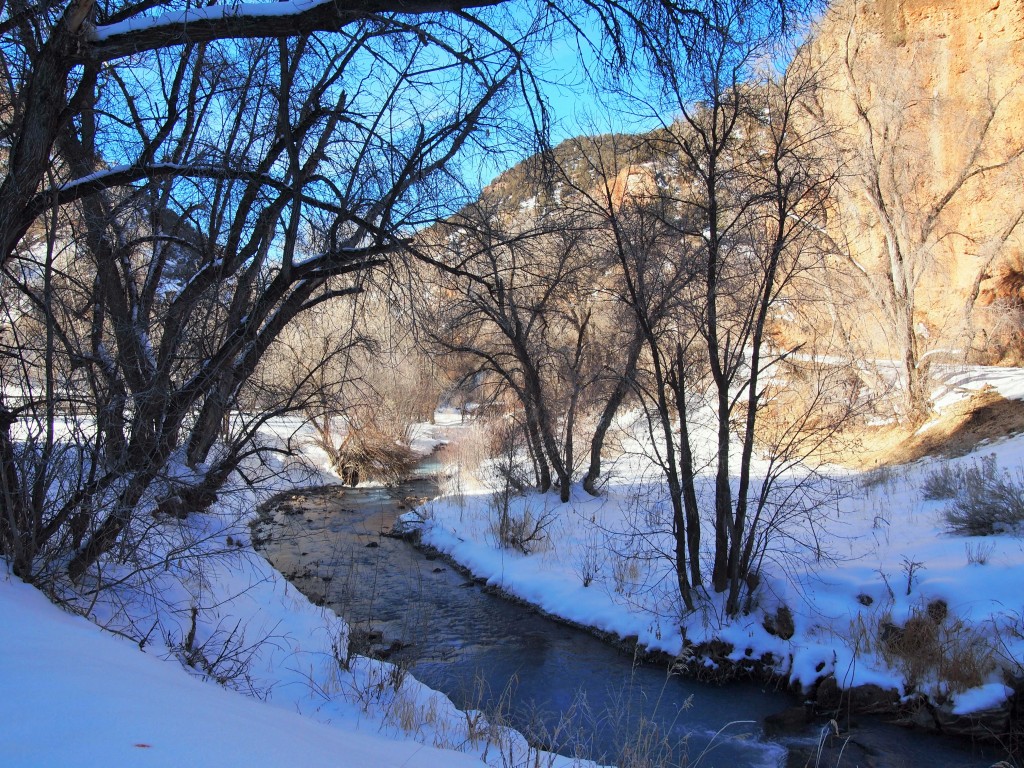 Once we arrived at the trailhead entrance, we turned off the road and headed toward a side canyon. The trail wasn’t marked but the path was already tracked down from others. For the first mile, the trail travels alongside Sixth Water Creek. It’s quite picturesque already, but since we had the trail to ourselves its beauty was compounded. It was calm, quiet, and white.

Since we were in a side canyon, the trail remained shaded and cold. My own exhalation caused frost to form on my hair! When we reached the bridge over Sixth Water Creek, we knew we’d reached the final mile. For the remainder of the hike, we followed Fifth Water Creek. Here, still shaded, the trail had been packed down enough that there was an icy layer which wasn’t always discernible at first glance. We had to be more cautious on parts off the trail which skirted drop-offs along with rises/falls in the trail. On the way out I wore my Yaktrax and the difference was incredible. I had absolutely no trouble on the icy portions.

Sunny at the trailhead 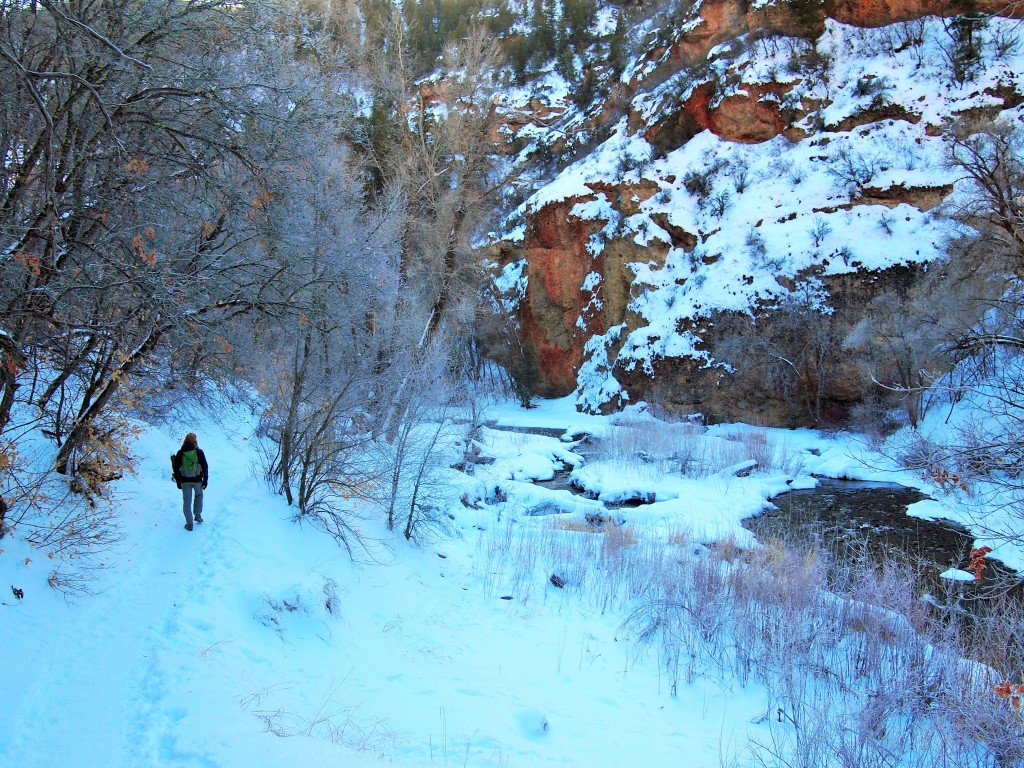 Heading into the side canyon 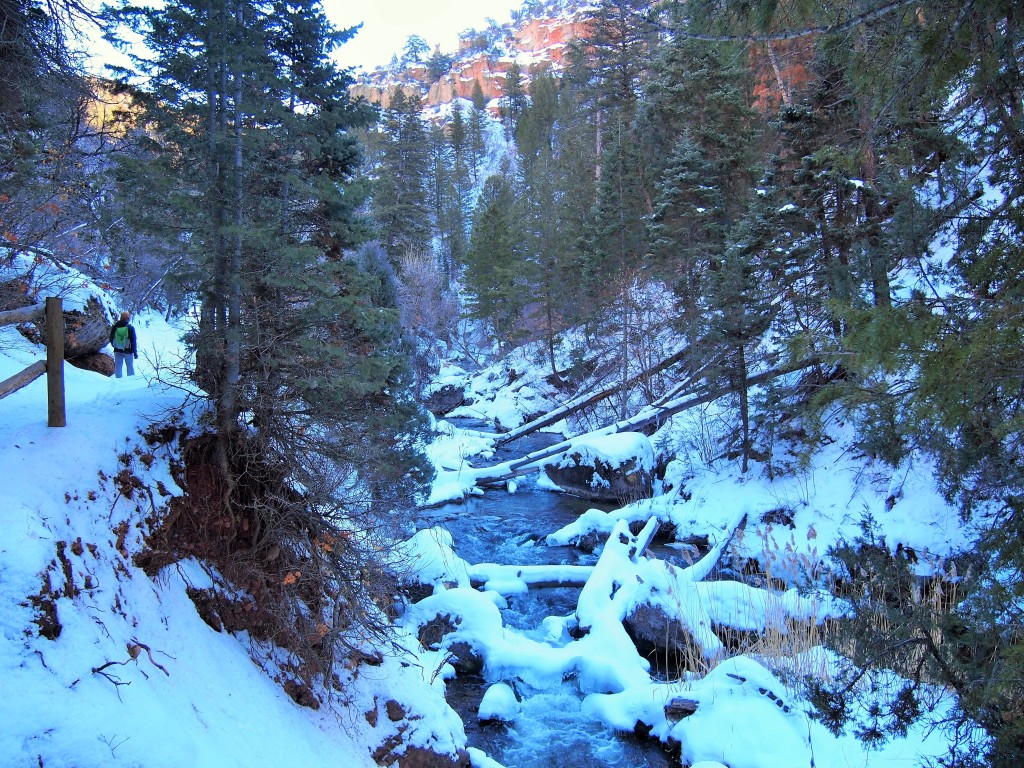 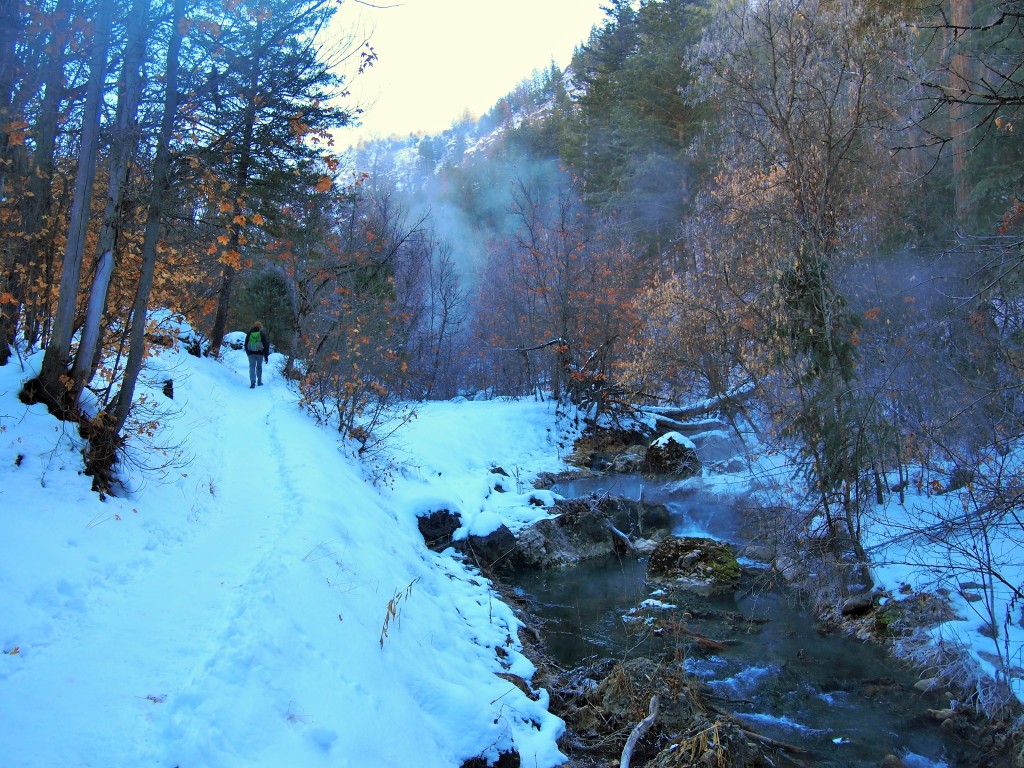 When we arrived at the hot springs, there were only four other people there. Victory! The trail first encounters the lower hot spring pools which are cooler but slightly larger. We bypassed those pools to get closer to the waterfall at the top. We ended up picking a pool situated in the upper middle and while it may not have been the hottest, it may have been the most comfortable. As other bathers shifted from cool to hot, we were able to stay put and soak. Our pool even had a nicely-placed rock we used as a small table. Zach could balance a small cutting board with cheese, salami, crackers, and hummus on the rock so we could feast and stay warm. It worked perfectly! 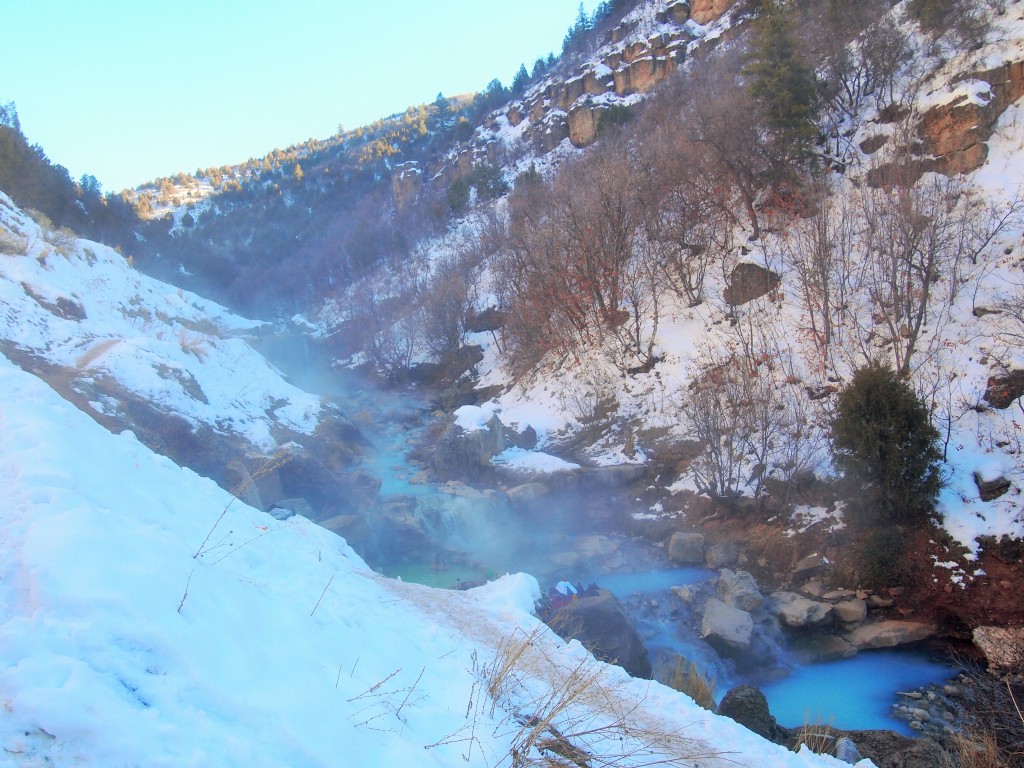 A steamy view upstream toward the waterfall 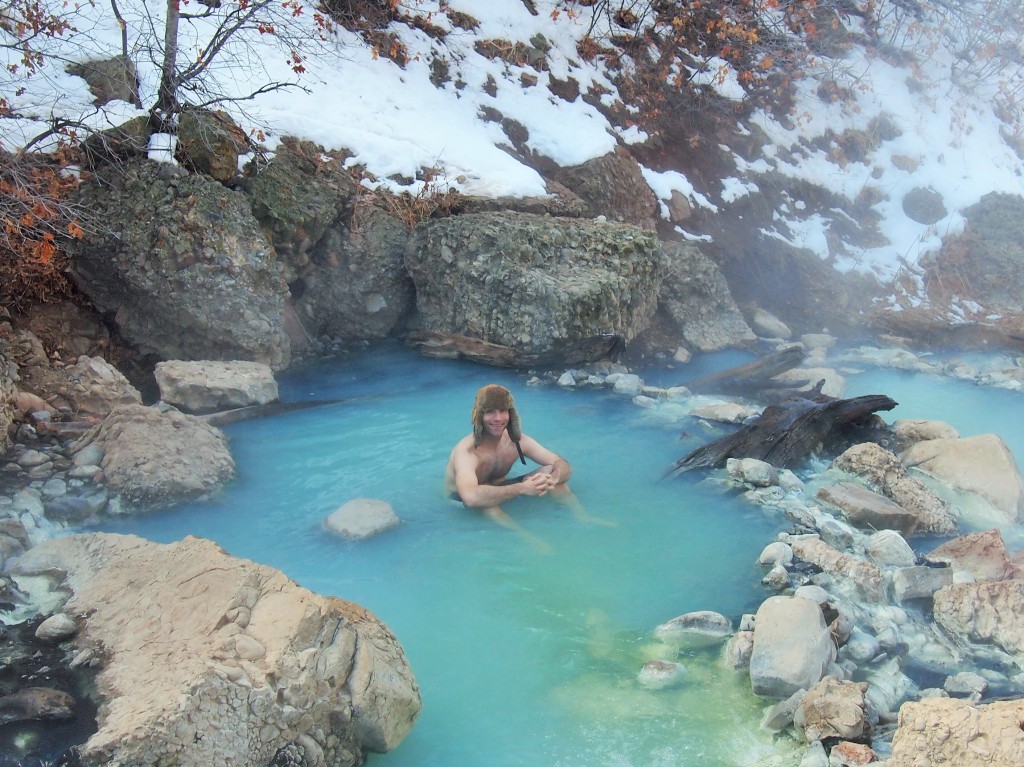 Our view from the pool 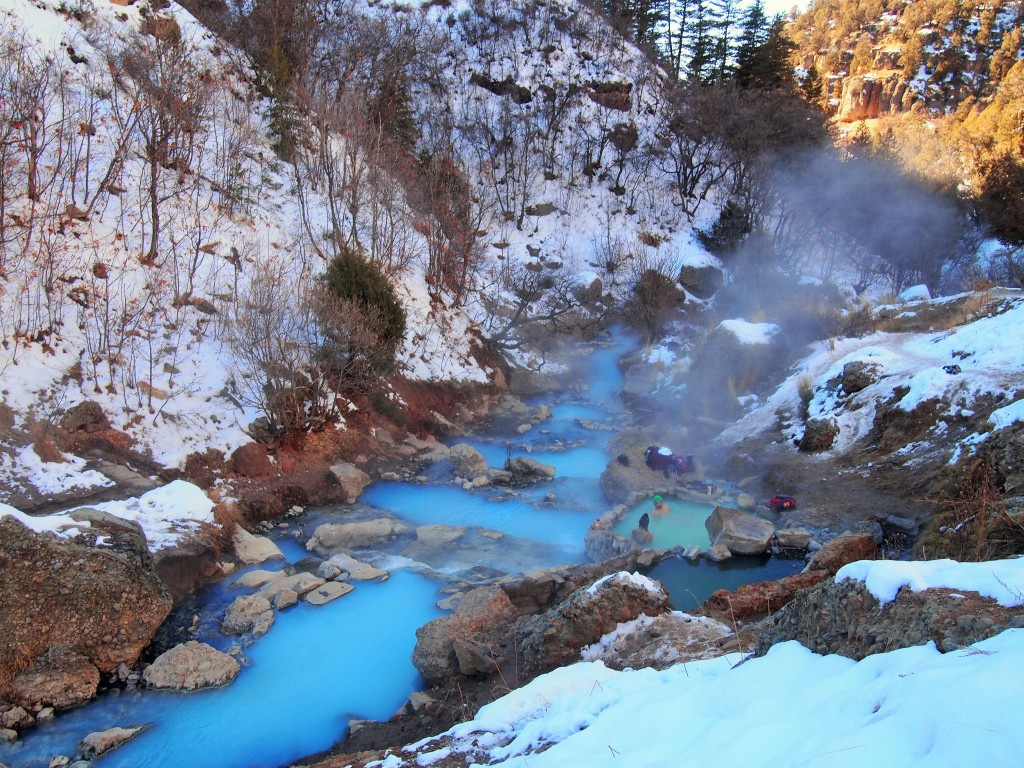 A view of the downstream pools

We stayed for close to two hours. After we arrived, there was a fairly steady flow of others, but it only began to get crowded as we left – around 2pm. On our way out I counted 20 people in the last mile nearest the hot springs, 15 people at the beginning of the trail or close to the trailhead, and over 45 people who were still walking on the road. The lesson: getting to the springs earlier is always better. We had plenty of solitude on our hike in and were nearly alone while we soaked. It was a great way to kick off 2018! 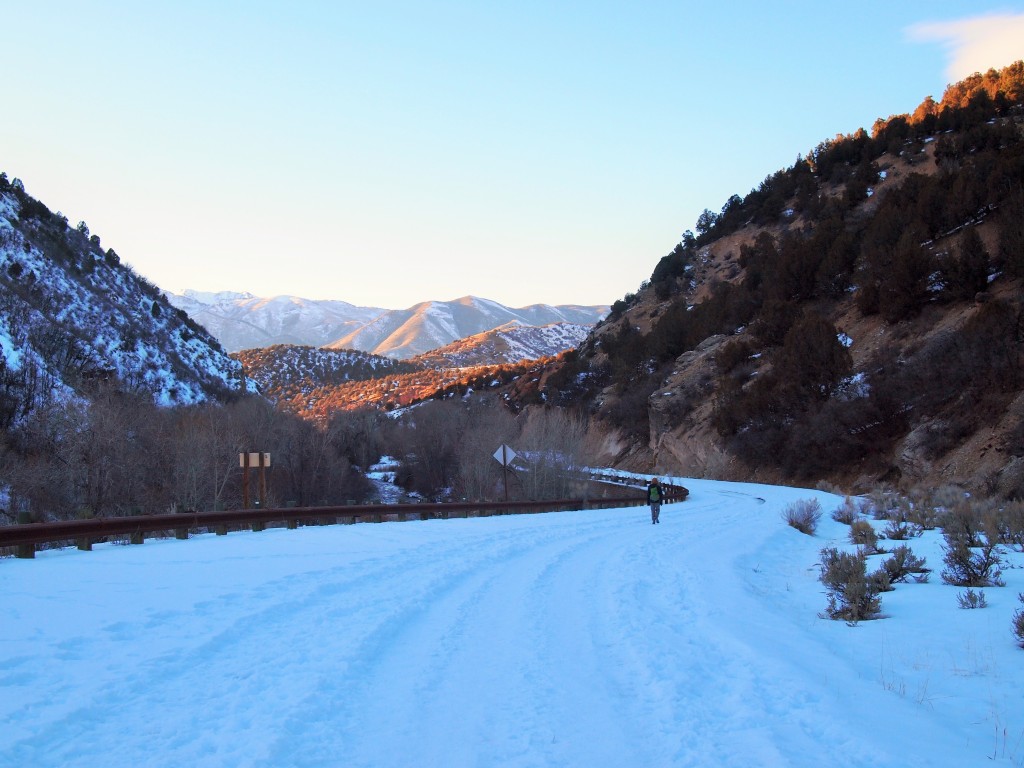