In the morning we enjoyed a leisurely breakfast of blueberry pancakes with coffee and tea. Lisa and I had picked the hike for the day: Ding and Dang Canyons. We had been talking about/researching the hike for a full week. We read descriptions, looked at Instagram photos, and even talked to another person who had completed it. It sounded completely do-able for our group of four. Taking three dogs along complicated things slightly, but with Truman and Belle (Lisa’s malchi) able to fit in packs, only Sasha (Ryan’s retriever mix) was considered a risk. But Lisa and I brushed those doubts aside and decided we wanted to tackle the two canyons. Ryan was less confident, and Zach had no idea what lay in store.

We arrived at the trailhead around 10am. We slathered on sunscreen, filled up our packs with liters of water and snacks, and set off down the wash. For the first 20 minutes we simply followed the wash along the face of the Reef. It wasn’t terrible going in, but we knew it would be hot and exhausting on our way out. In my early-hike enthusiasm, I found a lot of beauty in that initial 20 minutes.

Walking toward the Reef 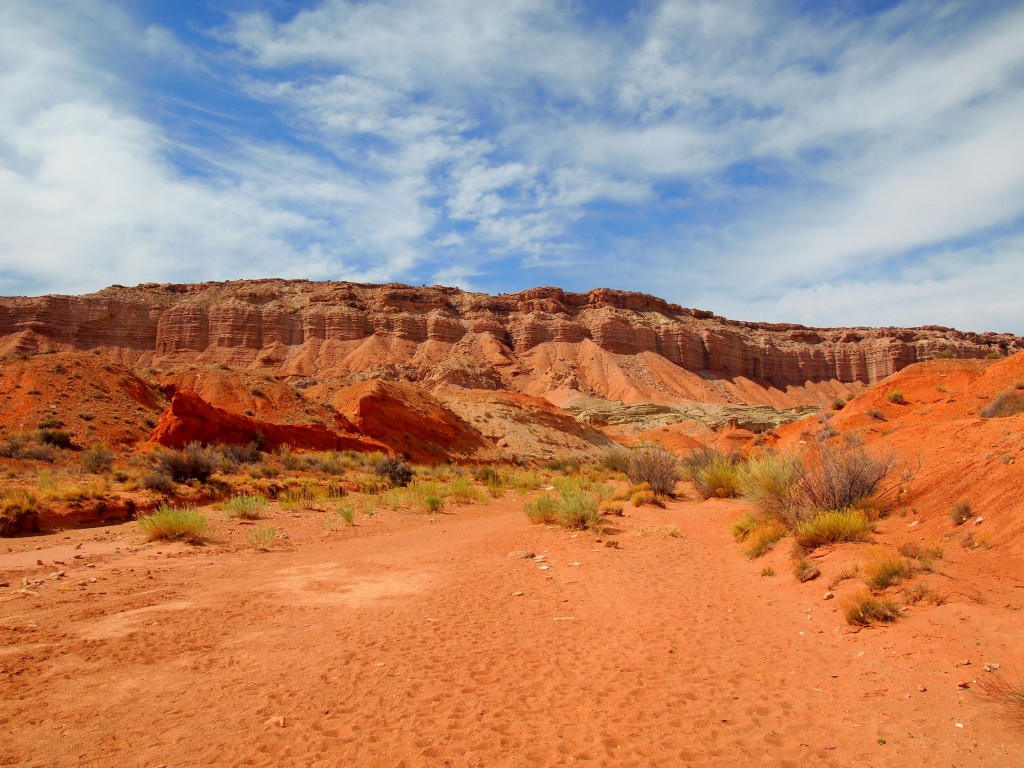 Branching off toward Ding

Soon the trail split – right for Ding and left for Dang. Most people make the loop by ascending Ding and descending Dang, though it could be done the opposite way for a greater challenge. We branched right for Ding and were shortly met with a slab of slickrock which marked the entrance to Ding. The beginning of Ding was rather enjoyable; we had to scramble up a couple boulders and ledges, but it was fairly easy. We reached the narrows section pretty quickly and enjoyed an easy jaunt through the cool shadows. 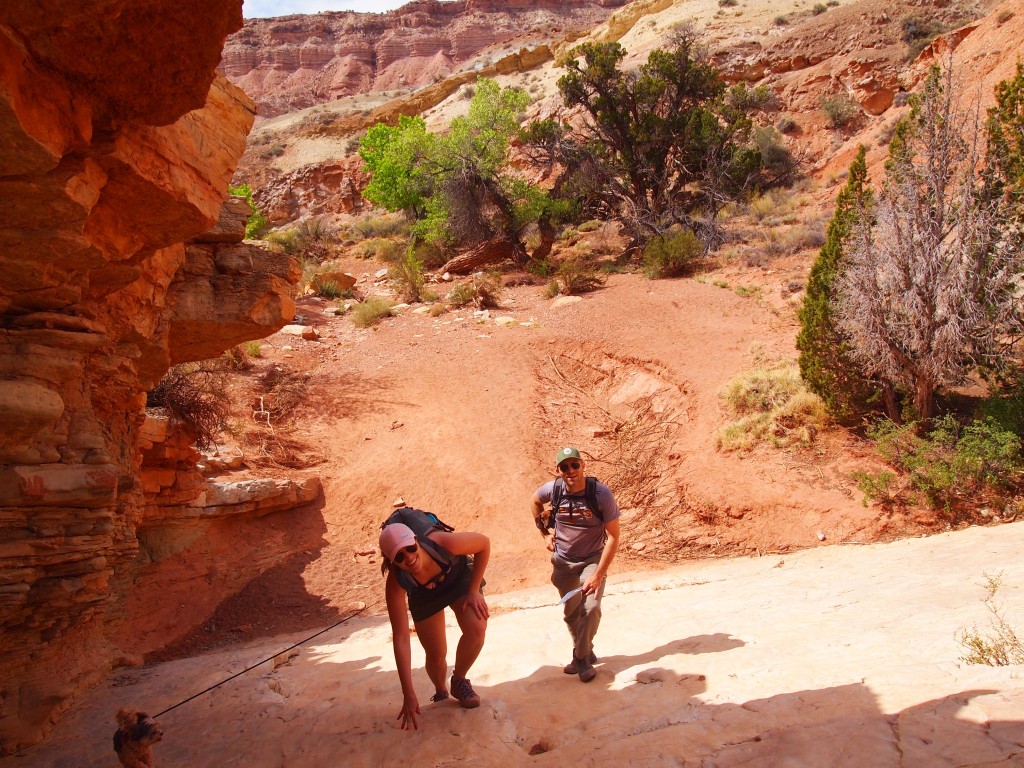 The narrows section in Ding was delightful 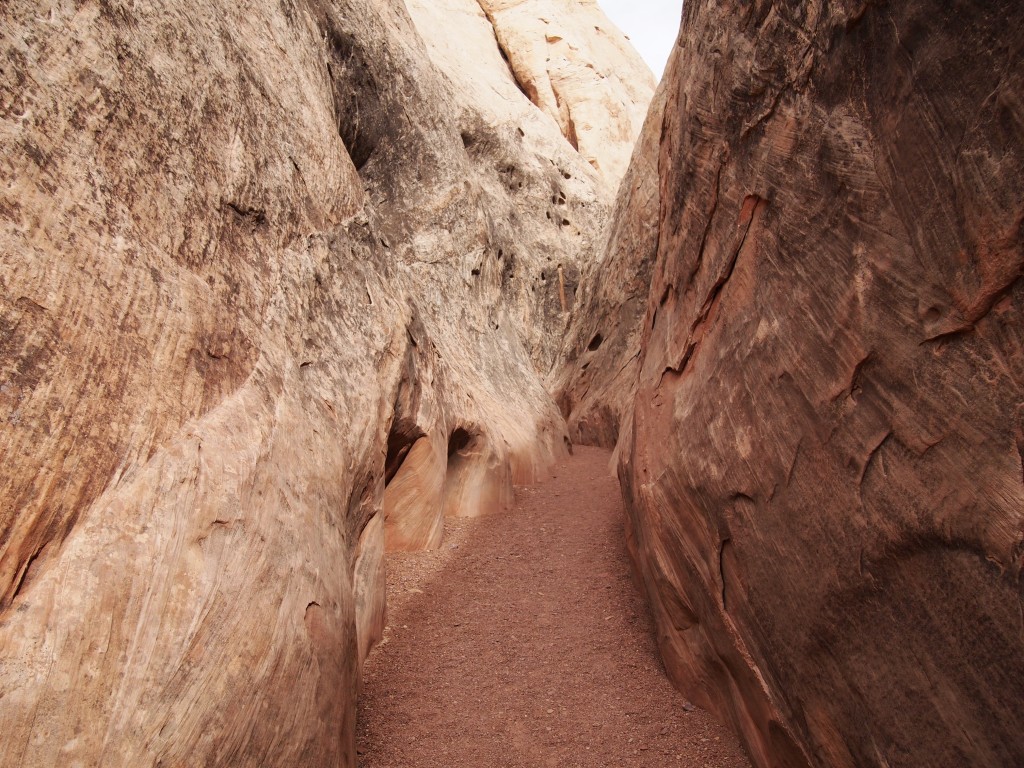 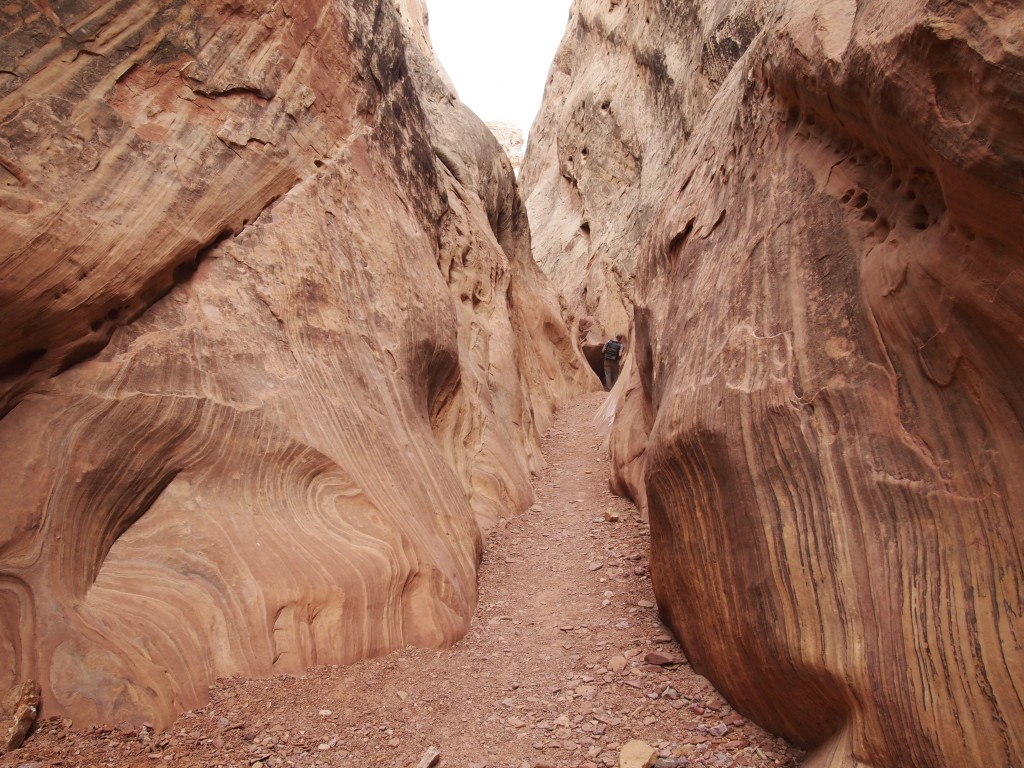 Zach disappears at the end

Truman was in and out of his pack on our ascent of Ding. He was thoroughly wiped out after our hike through Crack Canyon – in which he walked the full 3 miles – so we assumed he would gladly ride along in his pack. We were very wrong. In fact, in one section he was being particularly difficult by trying to crawl out of his pack while Zach skirted a series of deep pot holes. Zach had to wear the pack on his chest to keep Truman from tumbling out. Belle was a superstar trotting along with little trouble and Sasha was in her element vaulting from boulder to ledge to sandy wash.

Ding wasn’t difficult, but it was exhausting. I think we were all a little surprised. Several descriptions call it “an easy romp.” Clearly we have different definitions for the word “romp.” For most obstacles, we could survey the canyon for other routes and those we had to climb were easily defeated with teamwork – particularly necessary for my short legs. We stopped a couple of times on our ascent to rest and hydrate, and once we made it to the end of the canyon we found a spot in the shade to rest and refuel. It was a good feeling to see the canyon walls open up and finally emit us. 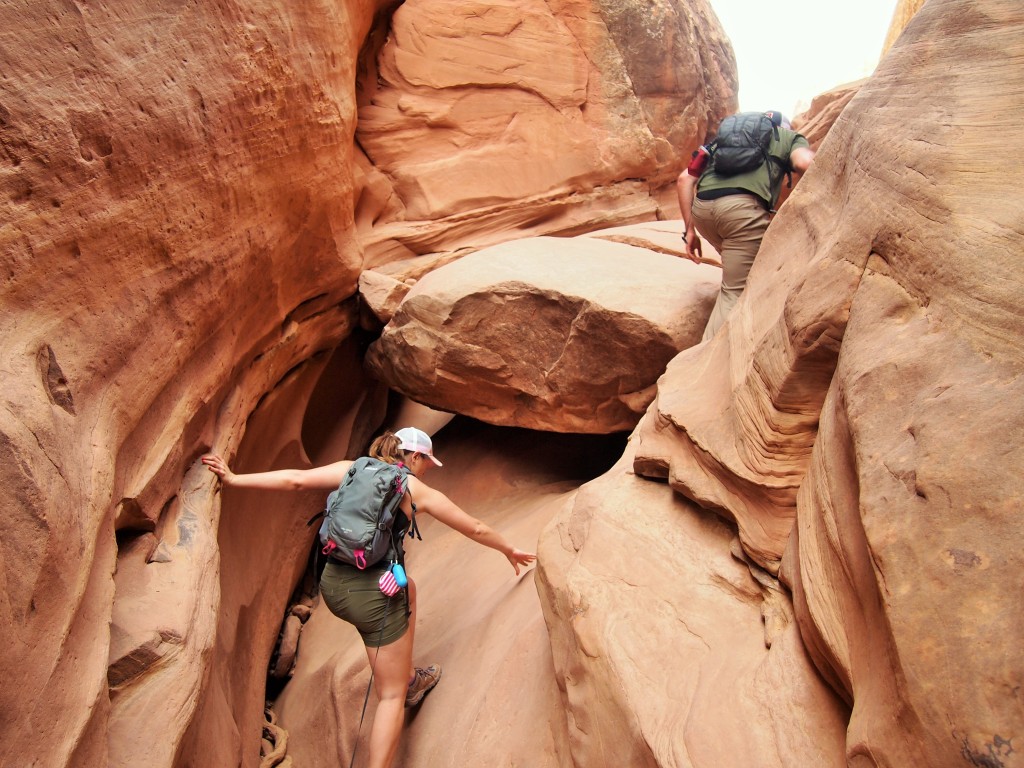 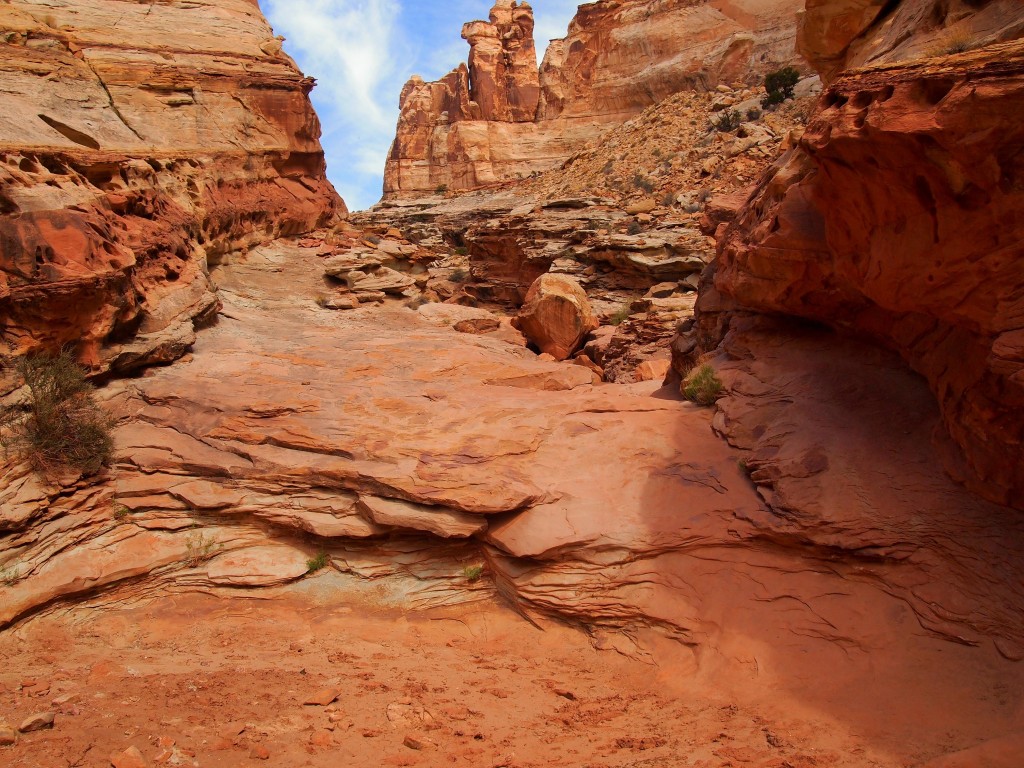 Coming out of Ding

After our rest, we were ready to tackle the rest of the hike. We followed a trail west between the Reef and Ding Dang Dome to connect to the top of Dang Canyon. This route was fully exposed, but strikingly beautiful. We had sweeping views of the Reef behind us and the imposing structure of Ding Dang Dome ahead. It was an ebullient point in the hike between tackling Ding and being unsure of what Dang held for us. 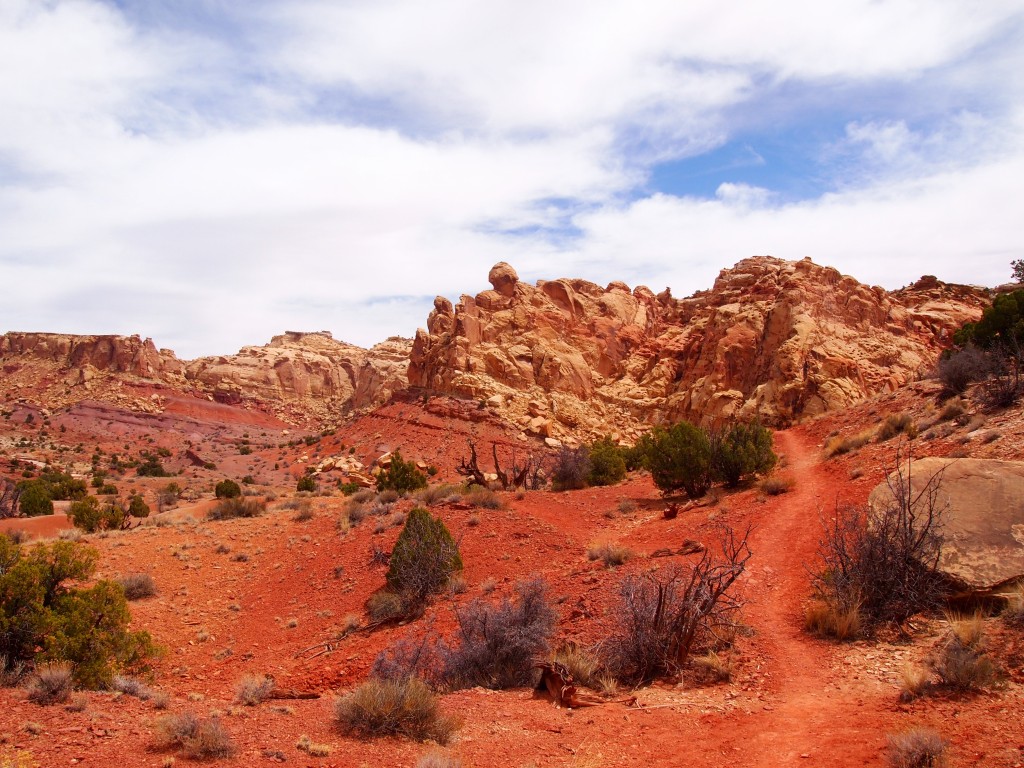 Gorgeous views of the Reef 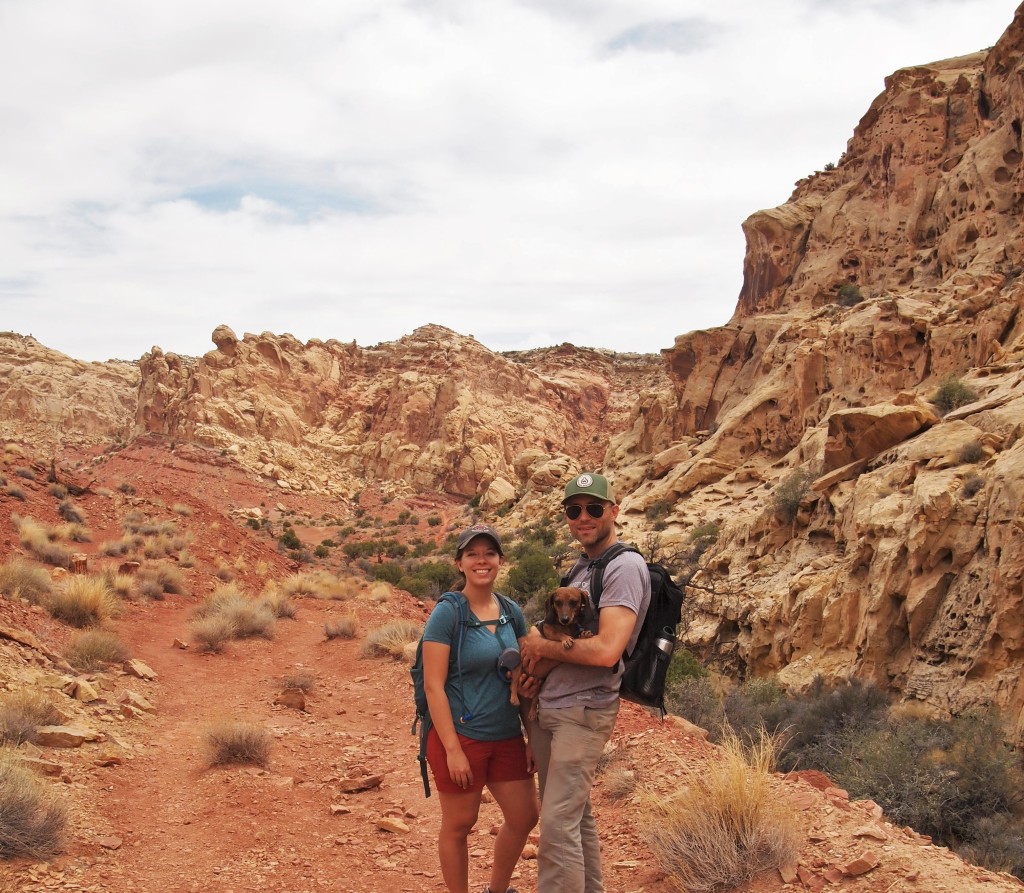 At the top of Dang Canyon

The beginning of Dang was reassuringly easy. Our first obstacle was a 12 ft. dry fall which we bypassed by using the ledge to the right. Several other small obstacles were avoided in a similar manner making us feel pretty good. The farther we went, the better I felt about the hike. Maybe we were worried for nothing?

A few of the online descriptions had suggested bringing a climbing rope to assist in getting over chockstones and dry falls that were seemingly difficult. We didn’t have one, however, because we’d also been reassured that it wasn’t completely necessary. But with each obstacle tackled, in the back of my mind I wondered if we would meet a fall we couldn’t overcome. We could always turn back if necessary, right?

Although Truman had been a bit of a pill in Ding Canyon, by the time he needed to be in his pack for the more difficult portions of Dang, he was more than obliging. Belle also tired out and was ready for a ride in Lisa’s backpack. This made it that much easier to get them down the various obstacles we faced the farther down the canyon we went. 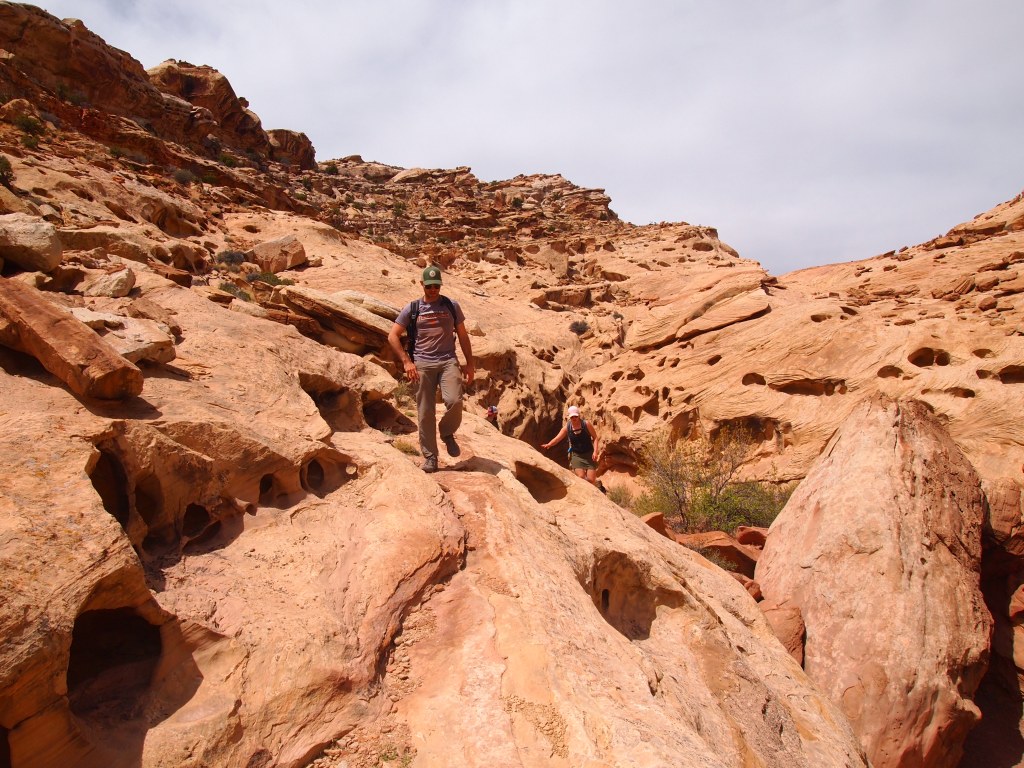 This boulder only looks precariously balanced 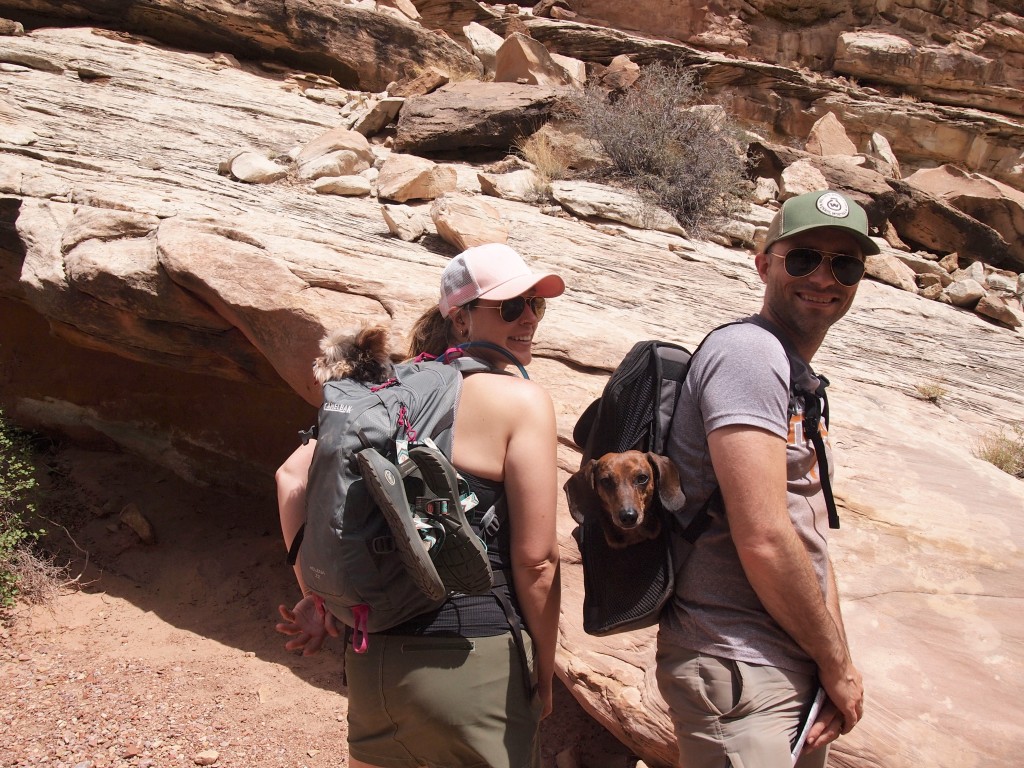 After a while we came to a point in the canyon where we could see the walls closing in. It felt ominous. Shortly thereafter we reached an obstacle which appeared trecherous. From the edge, the climb looked sketchy and without any good footing. There was a rope, but it seemed like we would have to free fall from the edge of the ledge to the bottom. On closer inspection, we were able to climb down onto a series of ledges, use the rope to shimmy down to another ledge, and easily climb to the bottom. Of course, from the bottom it looked almost friendly.

We had anticipated that particular obstacle as it had been mentioned in a few online descriptions. We thought we may be in the clear…

Assessing how to best climb down 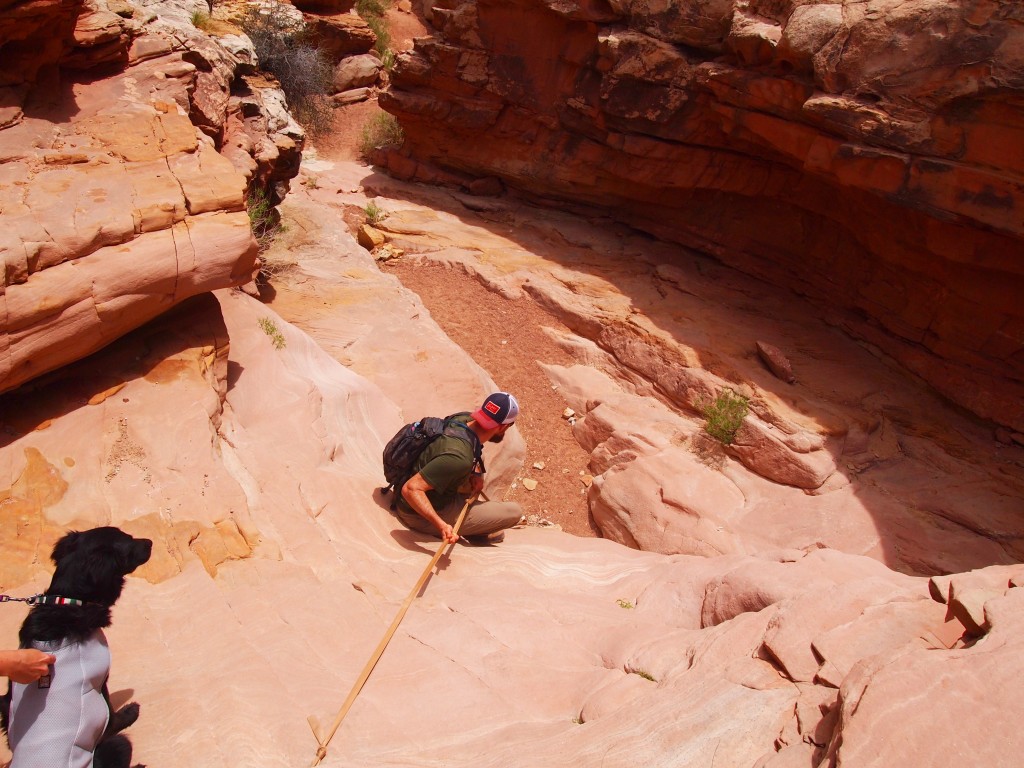 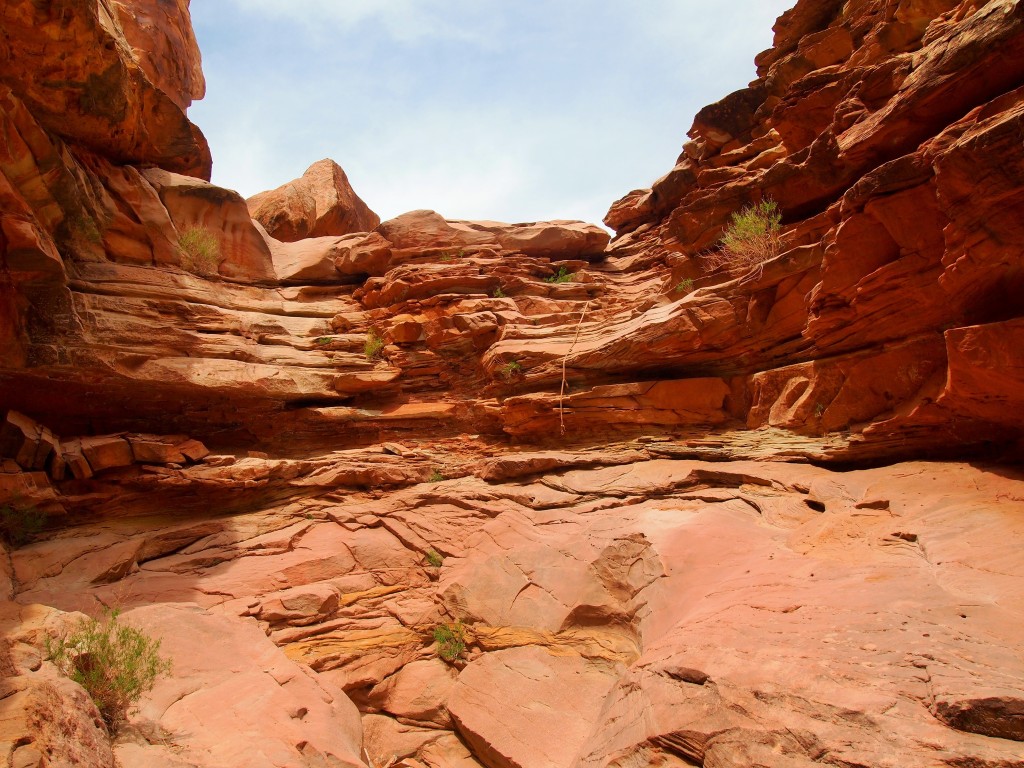 Looks quite a bit simpler from the bottom

The more difficult obstacles were still to come though. As we entered the narrows section of Dang, we were more than half way through the canyon. But here a series of chockstones created obstacles at (what felt like) every turn. Each time we successfully conquered a chockstone, we walked a little way and the next one was upon us. It was exhilarating and exhausting. Finally we reached a chockstone that seemed impassable. We stopped for a long while as Ryan and Zach figured out how to best climb down. We considered using Sasha’s leash for support. In the end, it wasn’t as difficult as it seemed (again), but it wasn’t simple. There was some sliding, stemming, and falling involved. At the bottom of that chockstone we were greeted with the first water of the hike, a butt-high stretch of cold water. There were a few final chockstone obstacles, but we were relieved to find them fairly easy or maybe our perspective had shifted. Either way, when we emerged from the narrows, I think we all felt victorious. 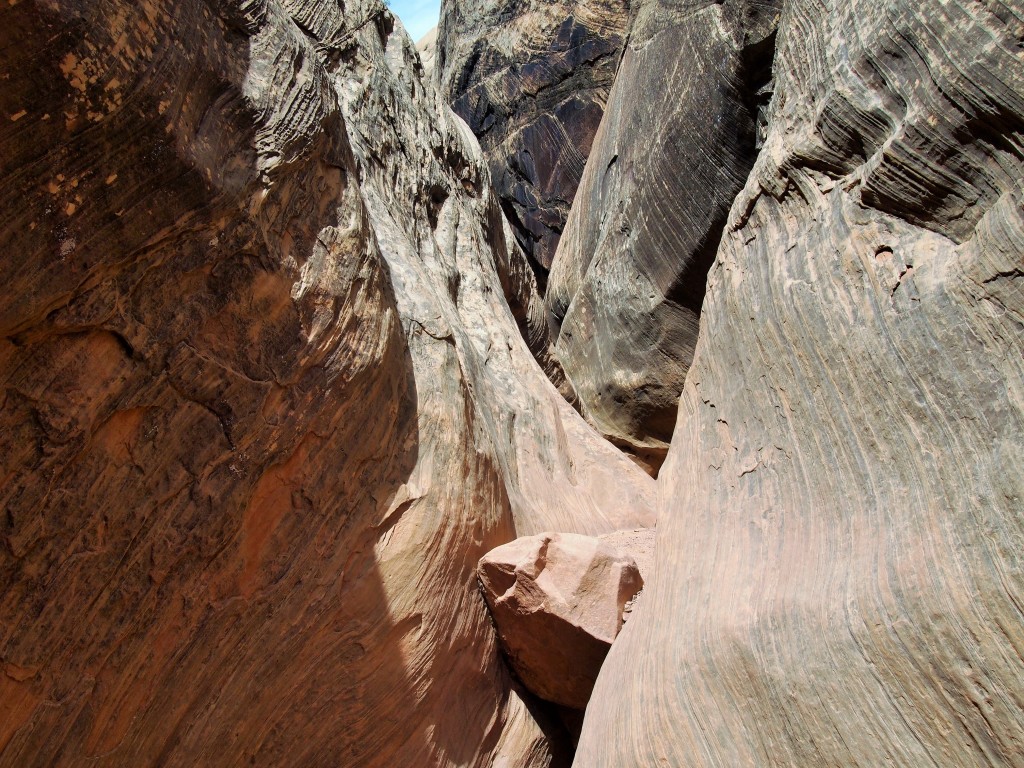 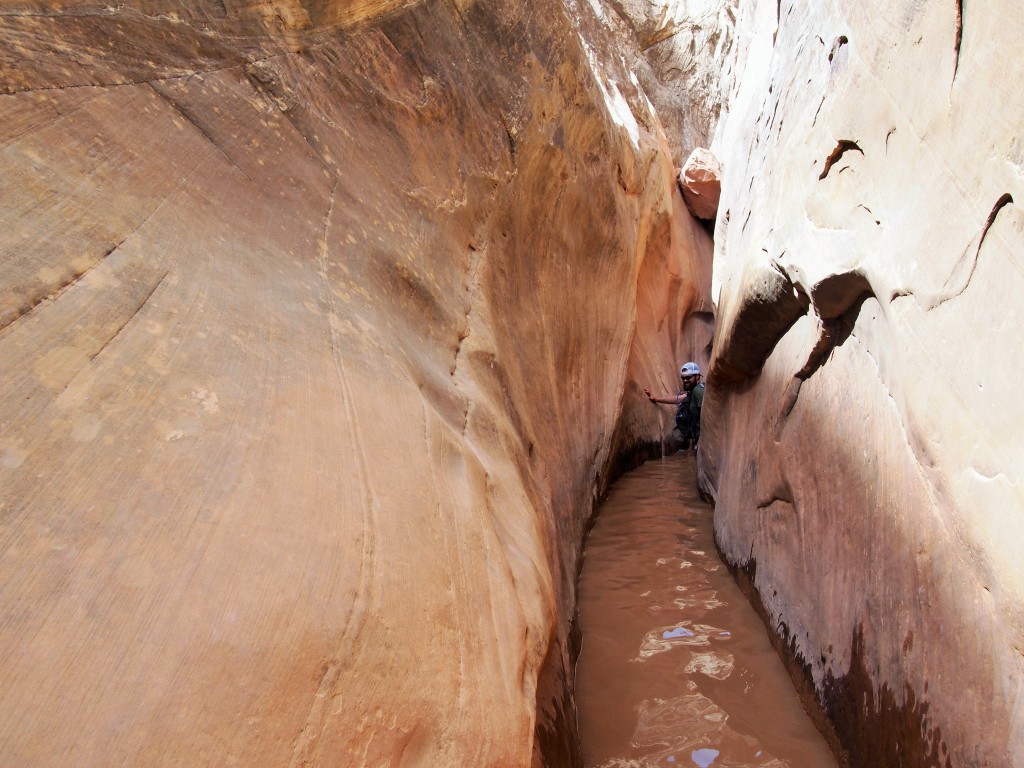 Ryan wades through the largest stretch of water 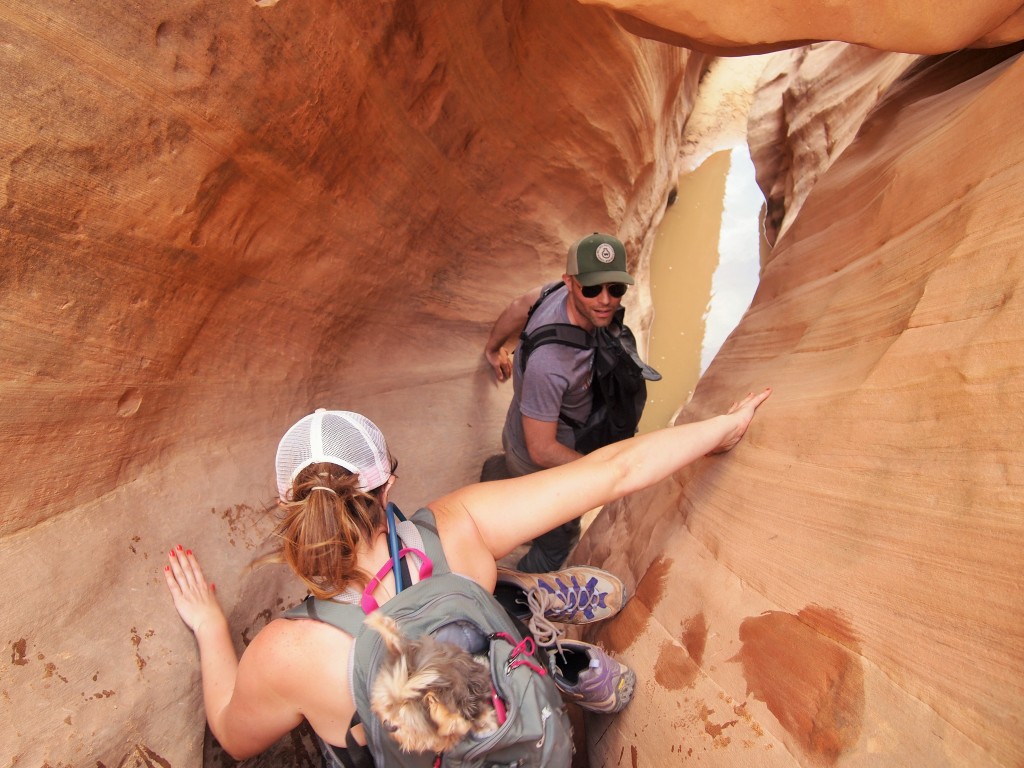 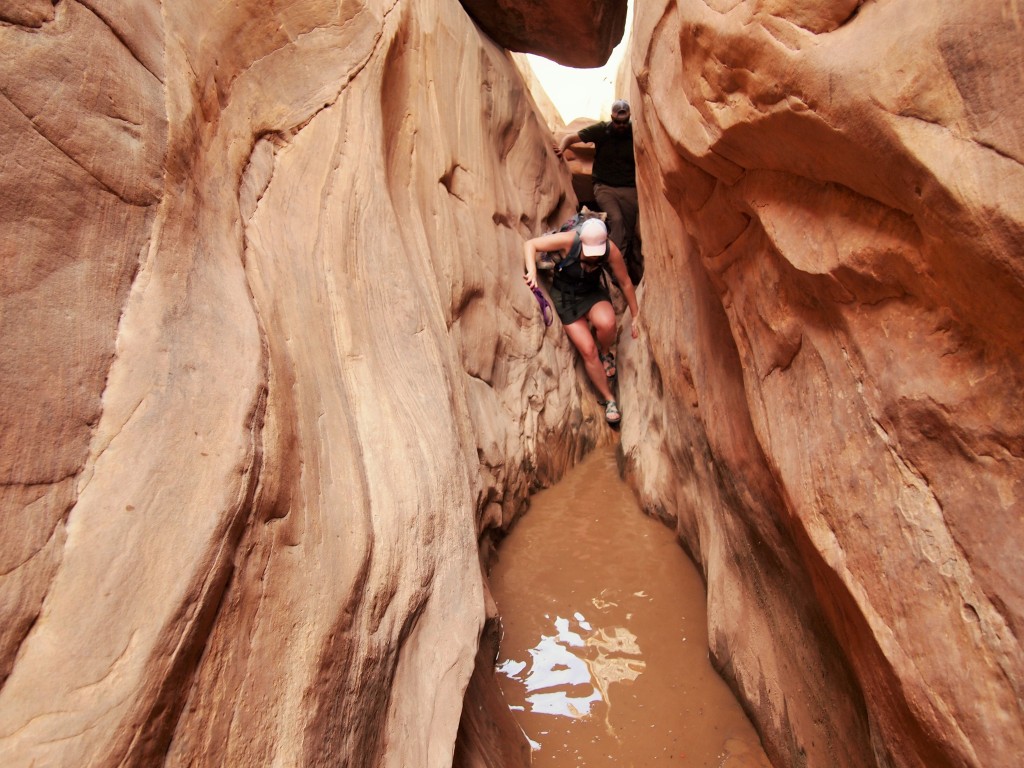 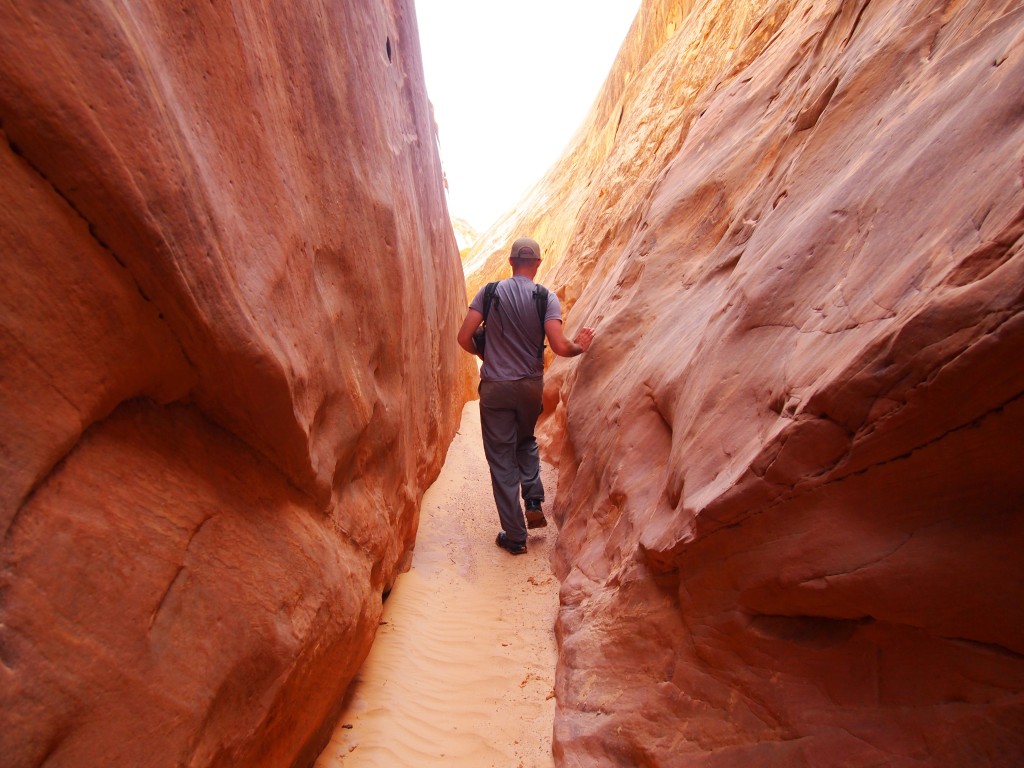 Emerging from the narrows!

I was hesitant to celebrate though; we still needed to get out of the canyon. That turned out to be a simple task and before we knew it, we were back in the wash returning to our cars. High fives were exchanged at the end, and we all felt triumphant, yet depleted.

Ding and Dang Canyons were a great challenge; we may have been surprised by the difficulty, but it wasn’t anything we couldn’t handle. This hike definitely isn’t for beginners though. Nearby Little Wild Horse is much easier and prettier – certainly a better hike for less experienced visitors. 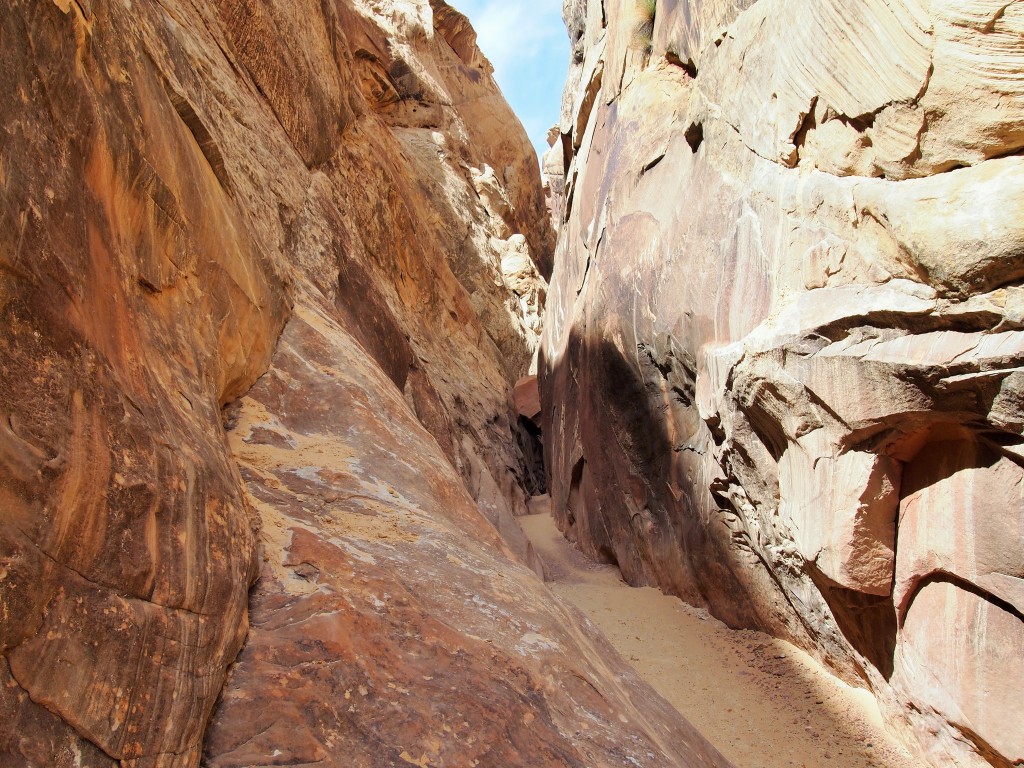 The canyon quickly opened up before us 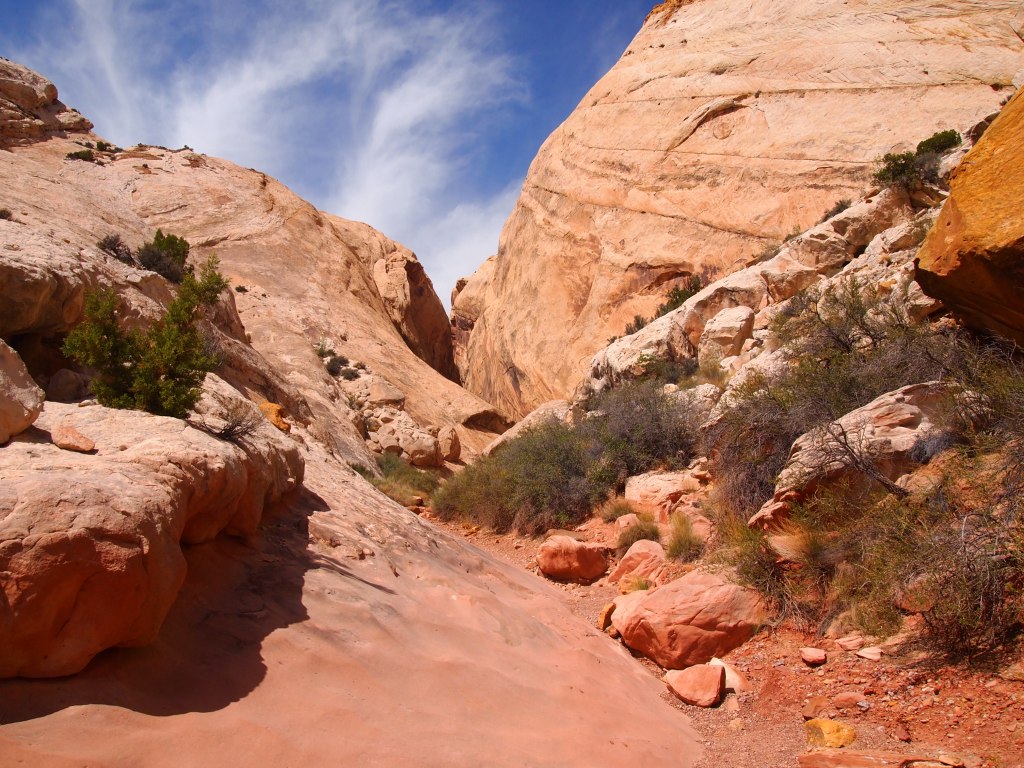 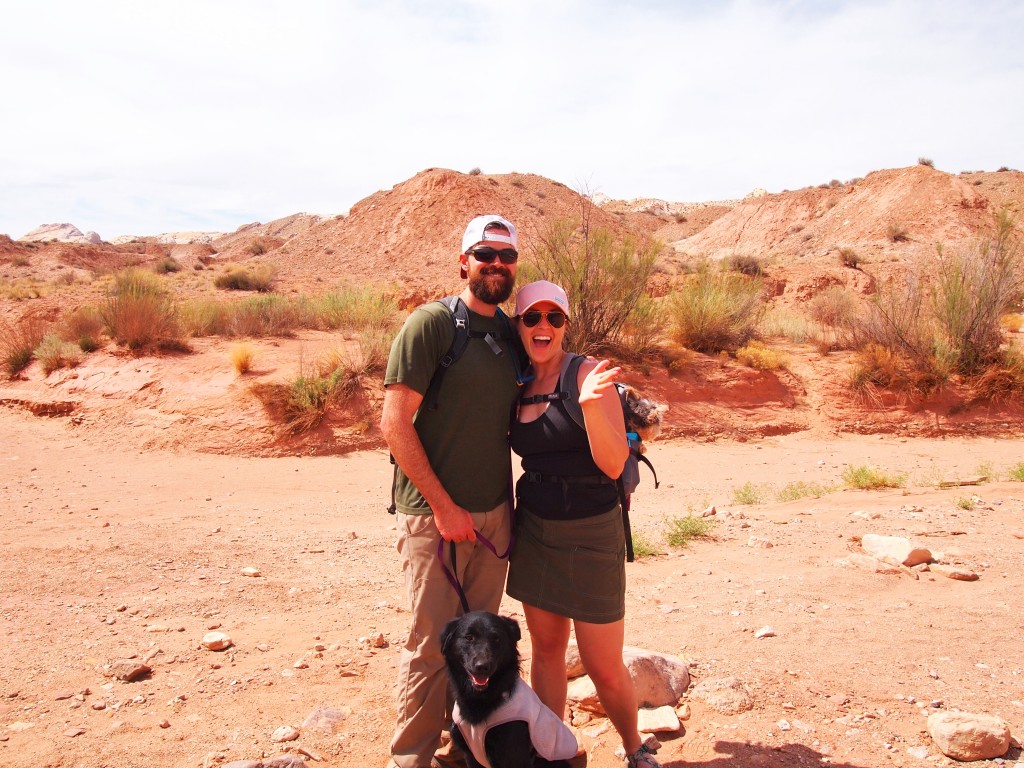