Recently we’ve gone to the Swell for our spring camping excursions, but in an effort to go somewhere new, Zach suggested Flaming Gorge National Recreation Area in northeastern Utah for our trip two weeks ago. The entire area spans 200,000 acres across Utah and Wyoming with ample recreation opportunities, but for this trip we stuck to the Utah side.

We left Salt Lake in the early afternoon on Friday with plans to meet our friends, Ryan and Lisa, at Vernal Brewing Company for an early dinner. We passed a couple pleasant hours on Vernal Brewing’s patio before heading north to Flaming Gorge to look for a campsite. We expected evening rain on Friday and we weren’t disappointed. As we climbed in elevation, the rain turned to snow, and Zach gave me a look. Luckily (for me), it was only lightly raining when we arrived at Red Canyon to scope out a campsite. We drove through two campgrounds before choosing a site at Canyon Rim Campground. There was only one occupied site – a large fifth wheel RV – so we had our pick of sites. We chose a tent-only cluster of three sites next to the canyon rim; we thought it was a safe bet that no one else would show up in the rain. Zach and I set up our tent, Ryan configured their roof-top tent, while Lisa strung a tarp between three trees to create a little shelter. We stayed up a little while chatting and drinking and then retired to our tents to sleep under the soft patter of rain.

When we woke up in the morning the rain had stopped, but a dense fog had settled over the entire campground. It kept the temperature much colder than we had anticipated, and we quickly built a fire to keep our extremities warm. We hoped it would eventually dissipate to reveal the gorge below and give us nice hiking weather. As I cooked a breakfast hash, doubts crept in, and I thought we may have to create a Plan B.

Our campsite surrounded by a blanket of fog

Fog drifts over the gorge

Then, almost miraculously, the fog began to lift, and the sun shone down brightly on our campsite. It was so warm and inviting; we all cheered! Since we spent much of the morning trying to ward off the chill, we all wanted to bask in the sun’s warmth for a while. Even though our campsite was next to two overlooks and the Canyon Rim Trail, there weren’t any people walking through. It felt like we had the entire campground to ourselves. It was so quiet and peaceful; we could simply sit and listen to the birds sing and the nearby marmot whistle.

The fog begins to lift

Our space as viewed from the rim

As it became clear that we were going to have a beautiful day, we started to get ready for a hike. Since the Canyon Rim Trail ran through our campground, we decided to follow it to its eastern end for a seven mile RT hike. While the name implies that the trail follows the canyon rim, only the portion from our campground to the Red Canyon Visitor’s Center actually does. The portion we hiked in the afternoon led us away from the canyon, through pine forests and meadows, to the height of the Greendale Overlook. It was an easy hike overall; only the length made it somewhat exhausting. 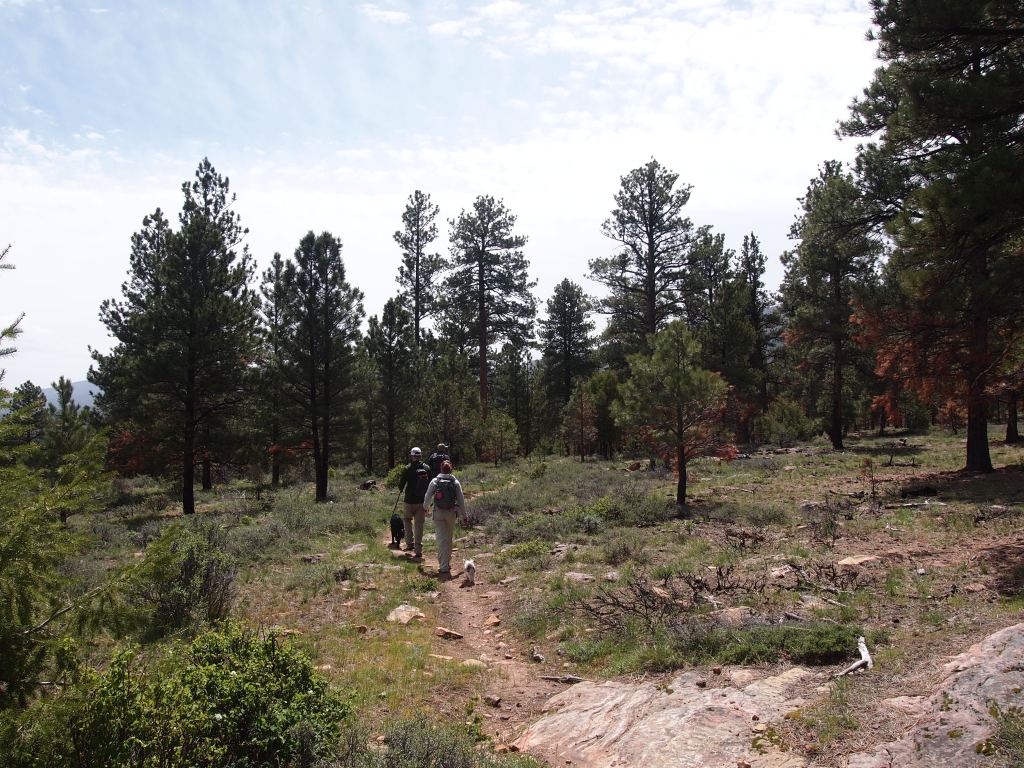 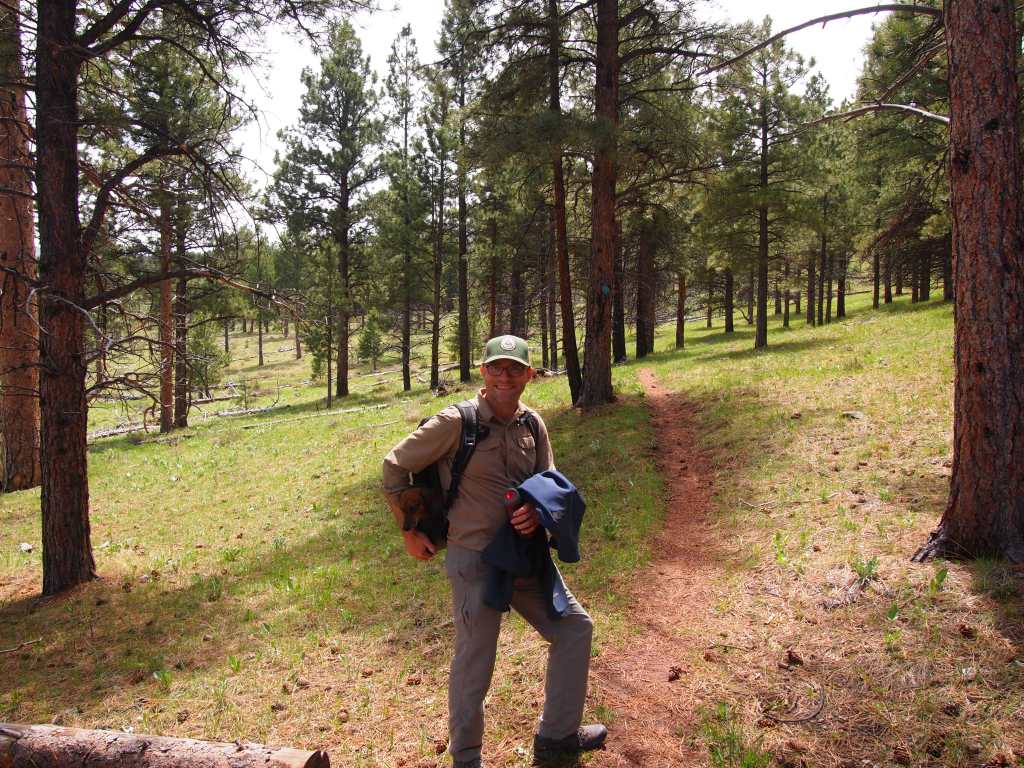 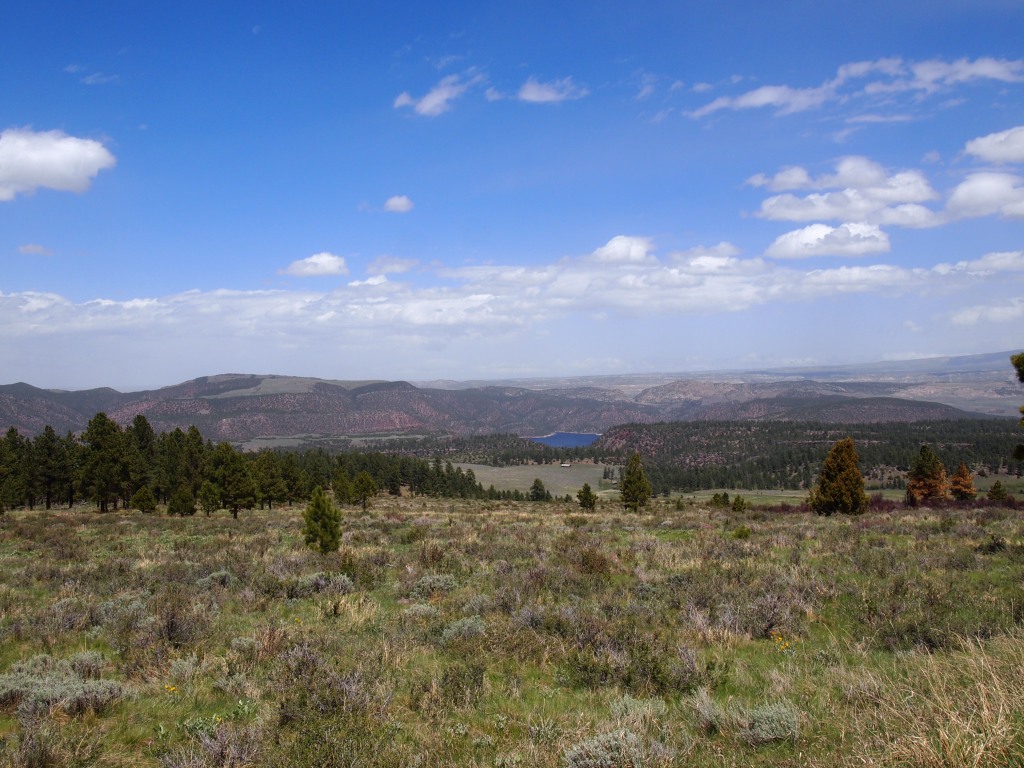 As we neared our campground at the end of the hike, we noticed dark clouds hovering above. We had marveled at our weather fortune thus far and hoped it was only a passing shower. We made it to our campsite just as drops began to fall, and I retreated to the cover of the tarp to make grilled cheese sandwiches. The rain was light and brief, but another development interrupted our reverie.

The improved weather brought with it a few more campers to our campground. We watched a small camper and a couple of cars drive by to choose a site near the fifth wheel. What we hadn’t expected – with all the available sites – was that someone would choose to camp next to us. But this is precisely what happened. On a regular weekend, this wouldn’t have been odd, but when ALL BUT THREE sites in the campground are open, why choose the site next to a group of people?! With the general solitude of the campground, our three dogs were not happy to see two people directly next to us. We knew it wouldn’t be enjoyable to have to quiet them down each time they detected our neighbors’ slightest movement. So, we decided to move. The next site down was the most secluded in the campground, and there wasn’t another site nearby. Even though it was a little frustrating, it ended up being a good decision. Although no one else arrived to camp for the rest of the evening, people continually drove up to check out the overlooks near our former site. Our new site provided a nice barrier to the traffic and the peace we desired.

Hanging at our new site

Before dinner we decided to finish the rest of the Canyon Rim Trail by walking to the Red Canyon Visitor’s Center. The mile stretch from our campground to the visitor’s center followed the canyon rim and provided nice late afternoon views of the Green River below. We were able to make dinner and relax a little more before the rain  descended upon us again. This time, however, we awoke to a gorgeous day and enjoyed a leisurely morning before packing up and heading out.