The hike to Crypt Lake is the most popular day hike in Waterton Lakes NP. I wasn’t fully convinced we should do it, but since several other hikes I’d read about were off limits due to the Kenow wildfire closures, I gave in. Trailhead access requires a water passage, so we bought our boat tickets when we arrived in town on Sunday night. During the summer, there are three morning departure times – 8:30am, 9am, & 10am – and two afternoon pickup times – 4pm & 5:30pm. We decided to take the first boat there and the first boat back.

The entire trail is a little under 5.5 miles one way and gains 2,300 feet in elevation, not unlike longer hikes in Utah’s Wasatch Mountains. However, this trail has a twist. Before reaching Crypt Lake, hikers have to traverse a long, narrow shelf, climb a ladder, crawl through a tunnel, and carefully scale the rockface using fixed cables.

The trail begins on the other side of Upper Waterton Lake, a 15 minute boat ride from the marina. I suppose you could kayak there yourself, but it was much nicer to hop on the boat at the end of the hike instead. Everyone gets off the boat at the same time. Some people hang back, others start up the trail immediately. We were in the latter group. For the first half mile or so, it is a line of people. However, everyone was good about moving over for faster hikers and by the time we reached the the top of the first set of switchbacks, the hikers had all evened out. 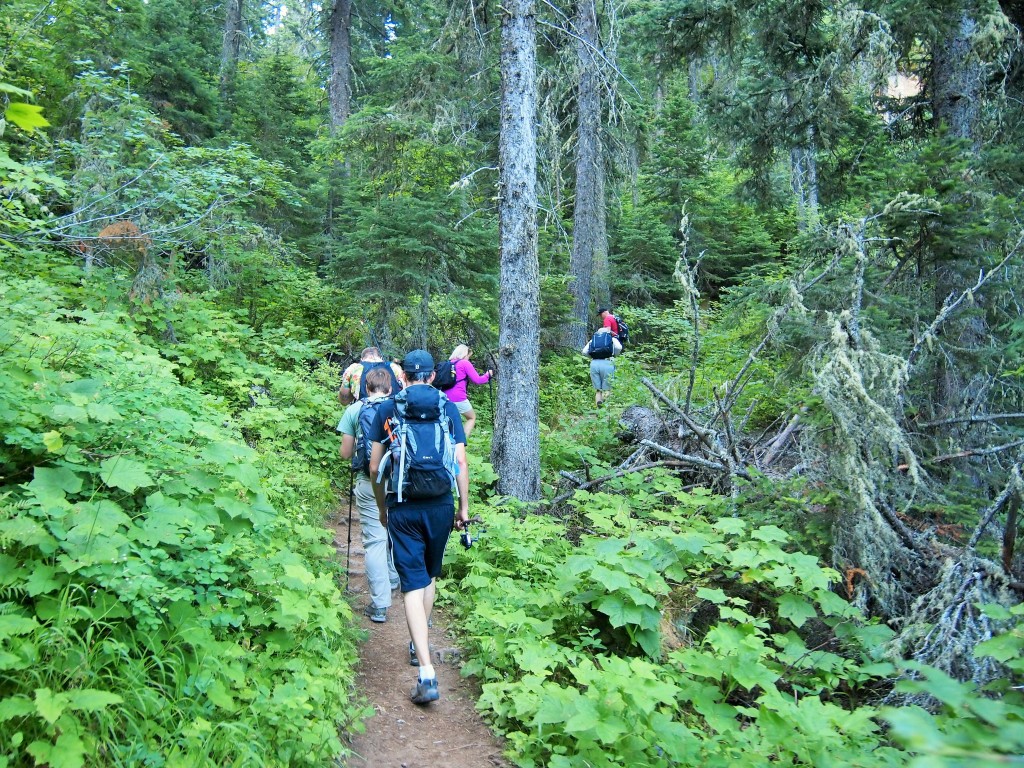 Our first view – looking back at Upper Waterton Lake

Since we were on the first boat, we had a nicely shaded ascent through the first half of the hike. I didn’t take any photos, because in an odd way I felt like we didn’t have time to stop. It felt like we were in a race, and we needed to keep moving. So we did. Soon enough we arrived at the fully exposed section of the trail – a steady ascent up winding switchbacks. Even in the morning sun, it was brutal. The sun glared down on us without any relief. 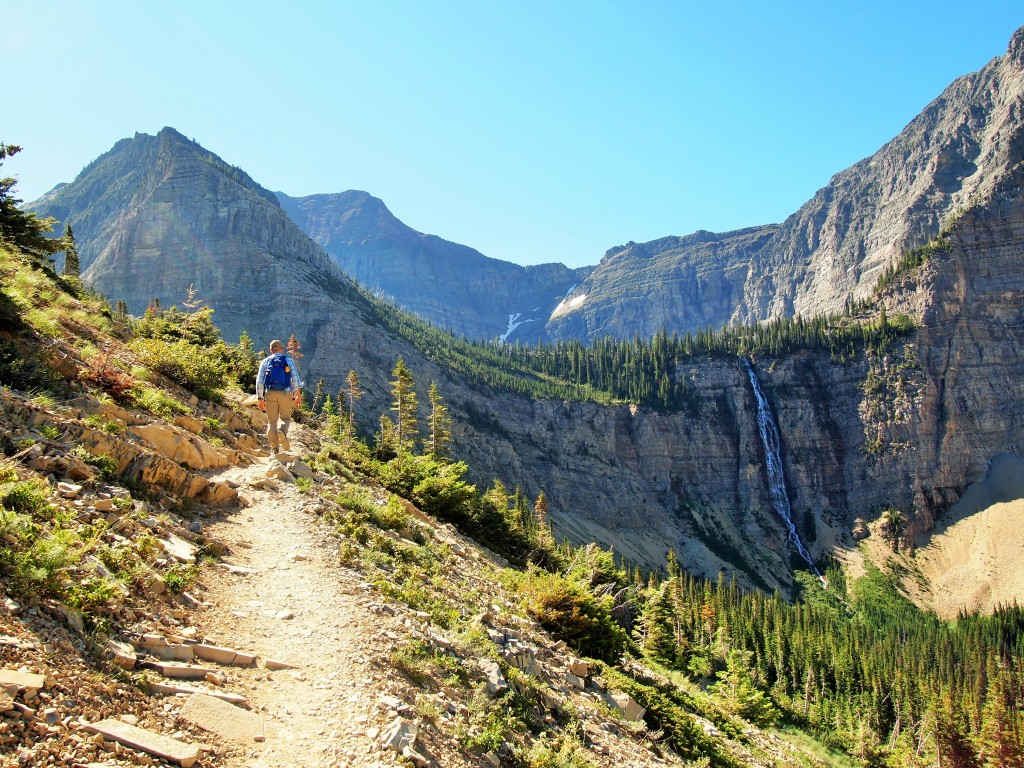 Believe it or not, our destination is in the basin above the waterfall

Then we reached it, the highlight of the trail, and the piece I had been dreading: the ladder, tunnel, and short cabled-ascent to the basin. As usual, my anxiety was unfounded and any doubt I had quickly dissipated. For whatever reason, it’s only the idea of these obstacles that I fear; once I’m there it’s not a problem. The ladder, although very skinny, was a cinch to climb, and the tunnel was a fun obstacle. We had to climb down from the tunnel’s exit and then skirt our way over to the cables to climb up the rest of the cliff-face. The cables weren’t entirely necessary, but were certainly comforting. Once we made it to the top, it was only a short distance to the lake itself.

We also realized at this point that we were at the head of the entire group and would be the second couple to arrive at the lake! It was nice to have this portion of the hike to ourselves (after we gave the couple ahead of us some distance).

Zach starts off toward the ladder

Out on the other side 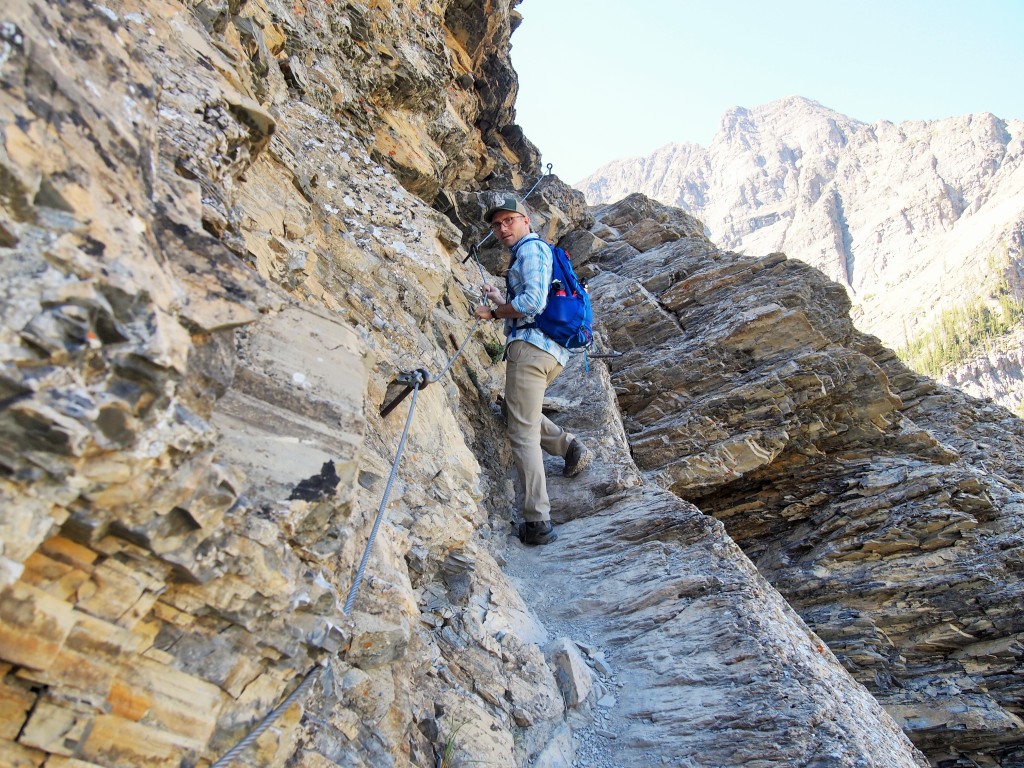 An easy ascent for us, not so easy if you’re afraid of heights

We made great time to the lake and were able to pick a more secluded spot closer to the southern side. We had our lunch and relaxed for 1.5 hours before we began our descent. We wanted to give ourselves enough time to do the detour loop of Hell-Roaring Falls which was an extra kilometer (0.6 miles). 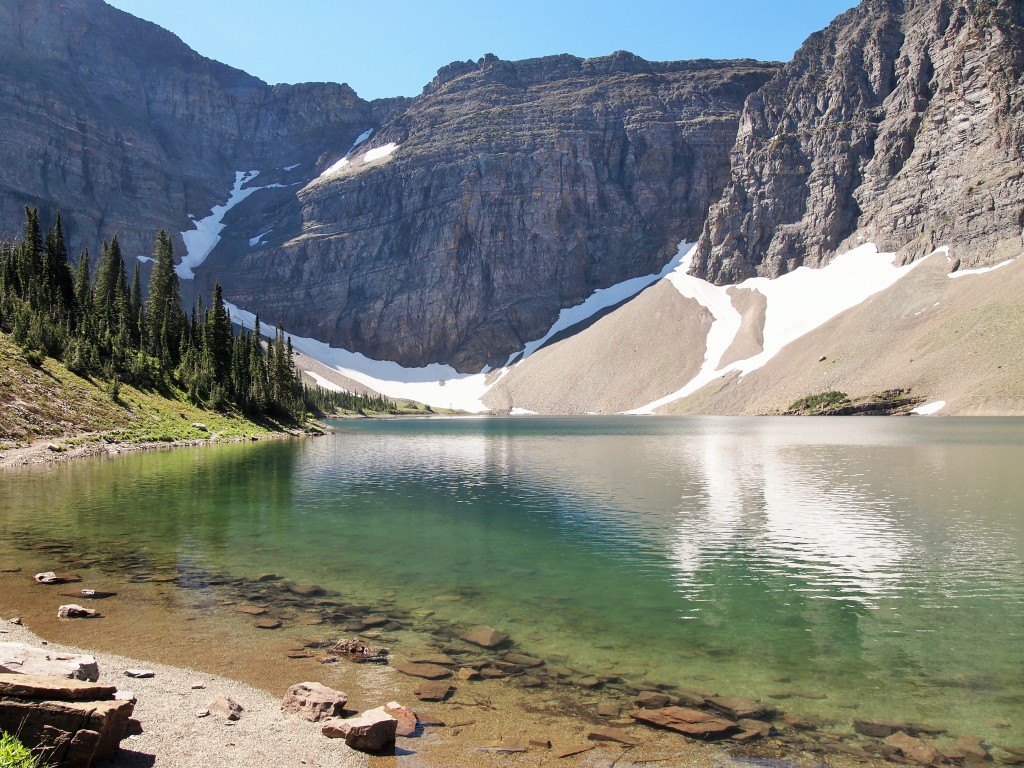 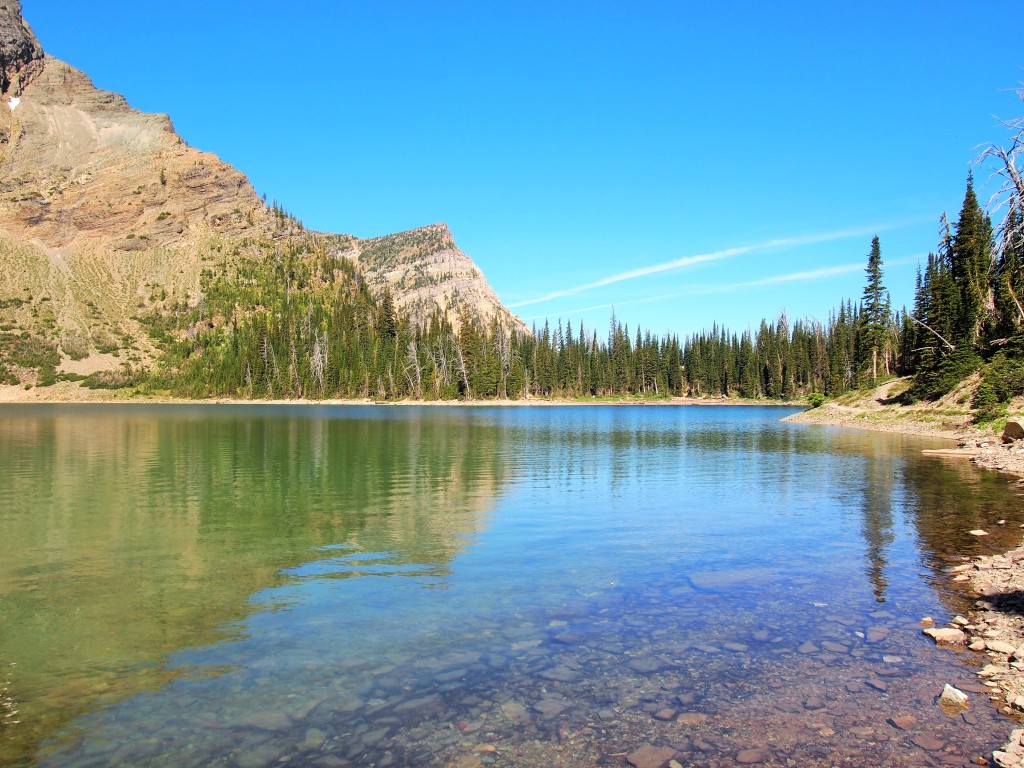 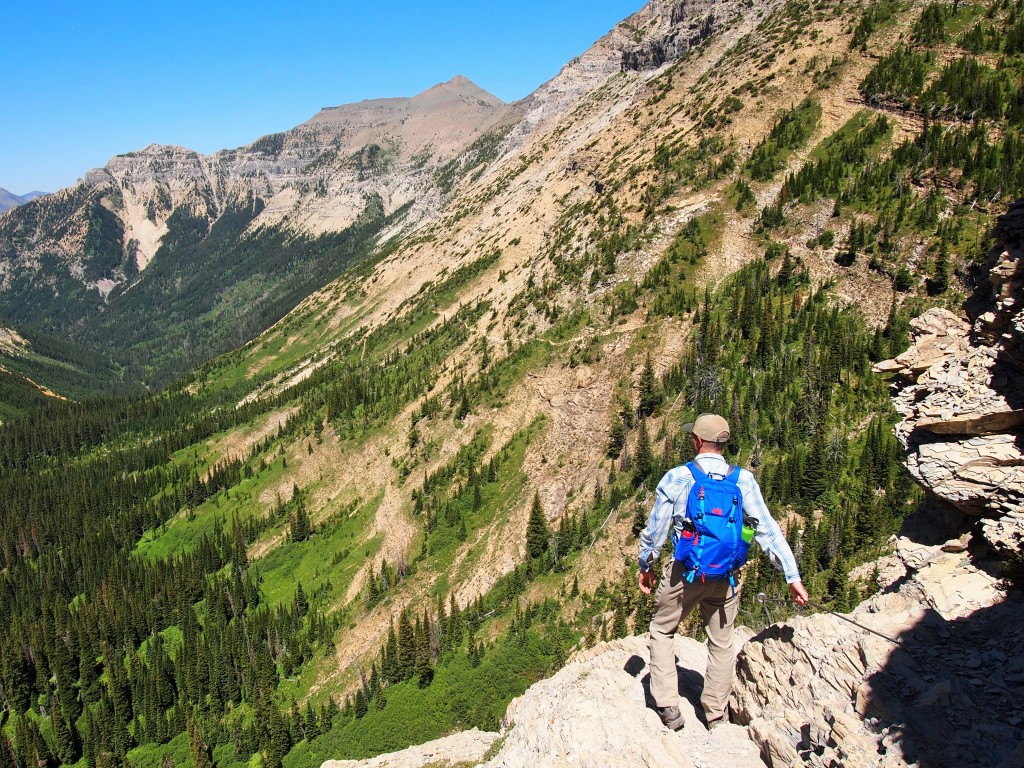 The descent was far worse than I expected; we were fully exposed to the sun the entire time. I assumed we would find the same shade we’d enjoyed in the morning once we reached the trees, but we didn’t. It was draining. We made the detour to Hell-Roaring Falls, but I’m not sure it was entirely worth it. At that point, I was tired of being in the sun and my right knee was angry. Zach enjoyed it and was tempted to jump into one of the whirlpools. It was definitely better to do the loop on our descent as the trail was much steeper and would have been irritating to climb up.

We arrived back at the trailhead with about 20 minutes to spare before the 4pm boat arrived. We had the chance to chat with some other hikers, eat a snack, rest our feet, and then the boat arrived promptly at 4pm. 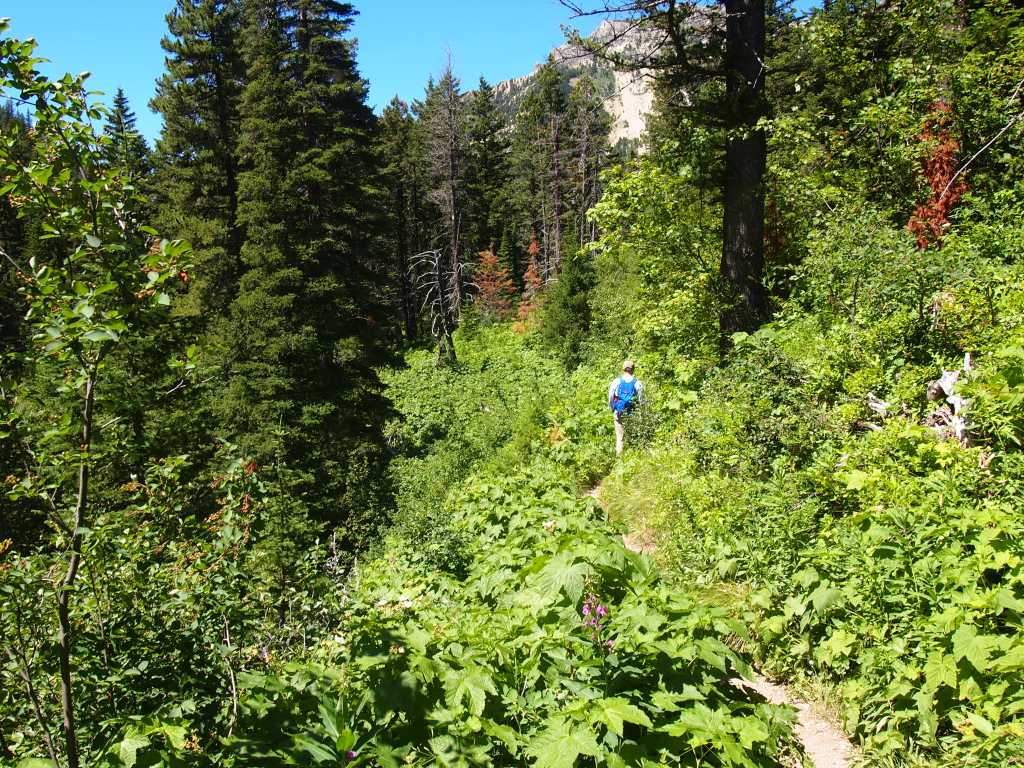 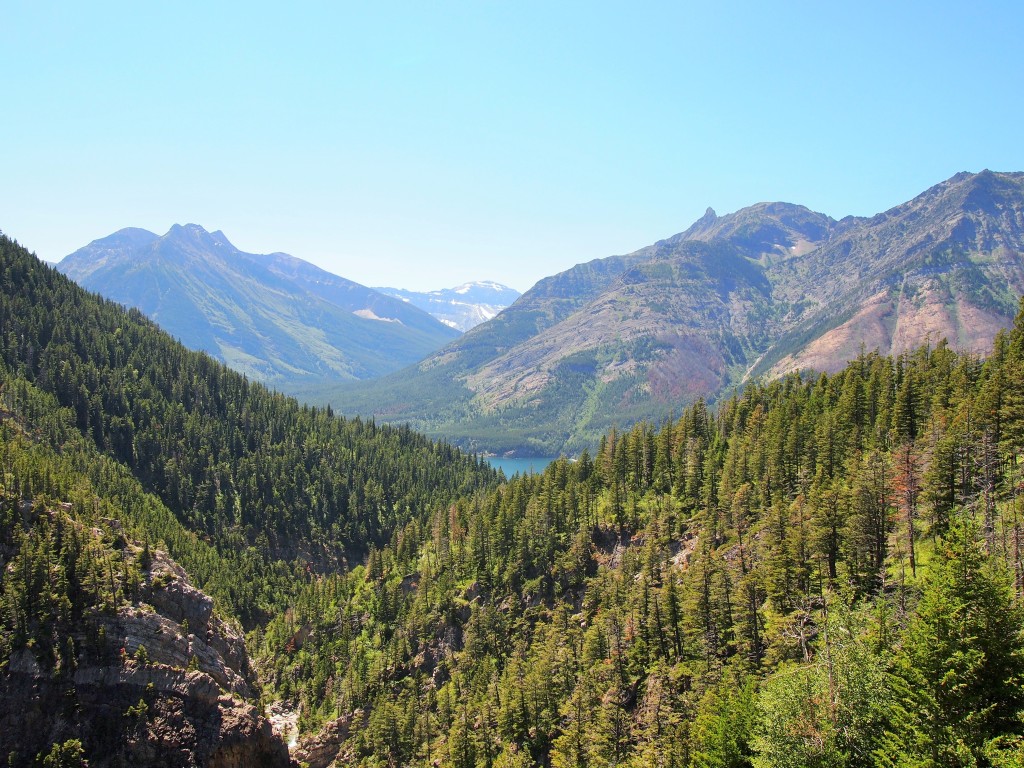 On our detour we caught more glimpses of Upper Waterton Lake 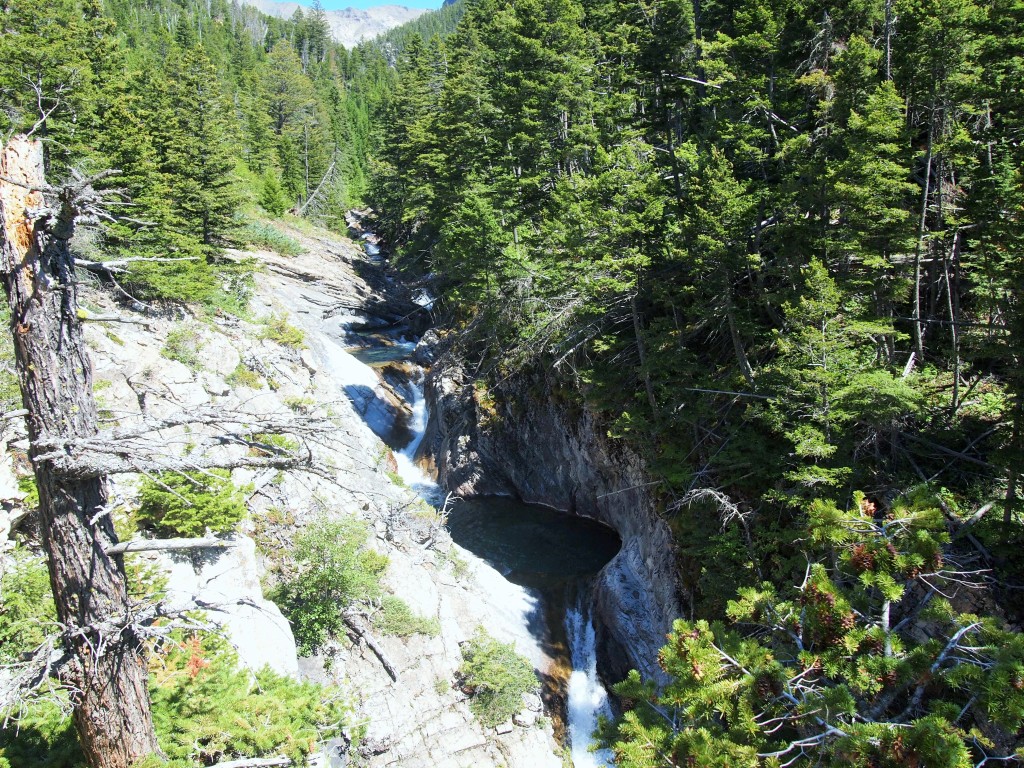 Originally we planned to kayak after our hike, but the wind had picked up and the lake was choppy. Instead, we grabbed some waffles and walked back to our campsite to collect our chairs and beers. We set up on the lakeshore and drank it all in. It was a damn good day. 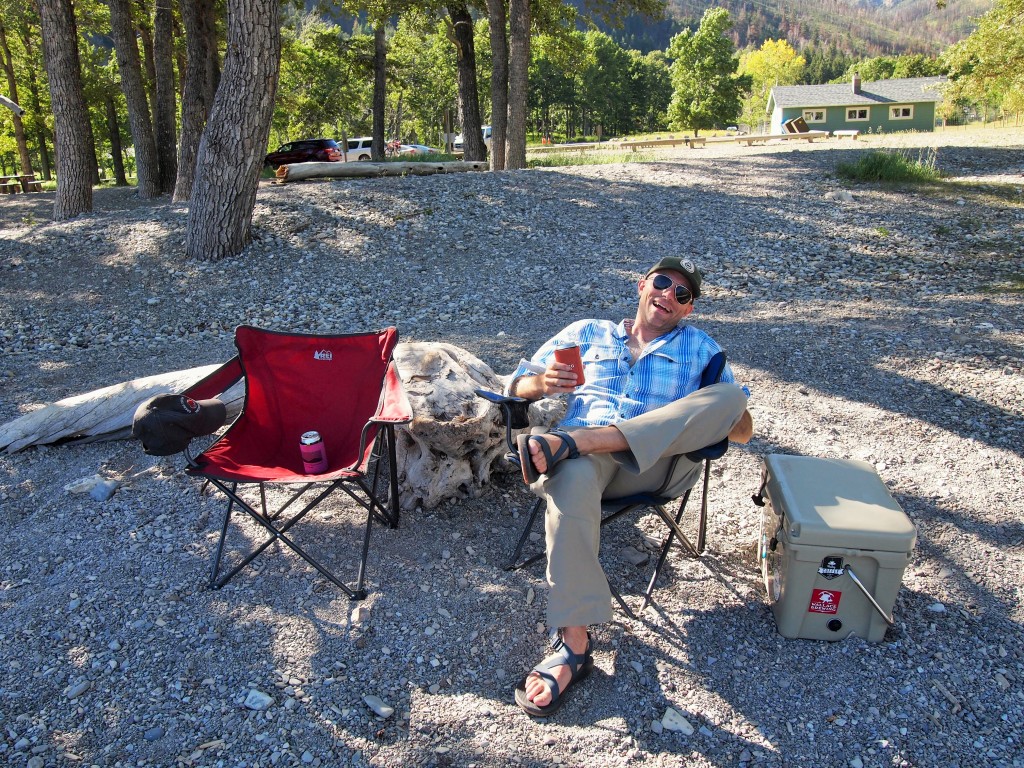 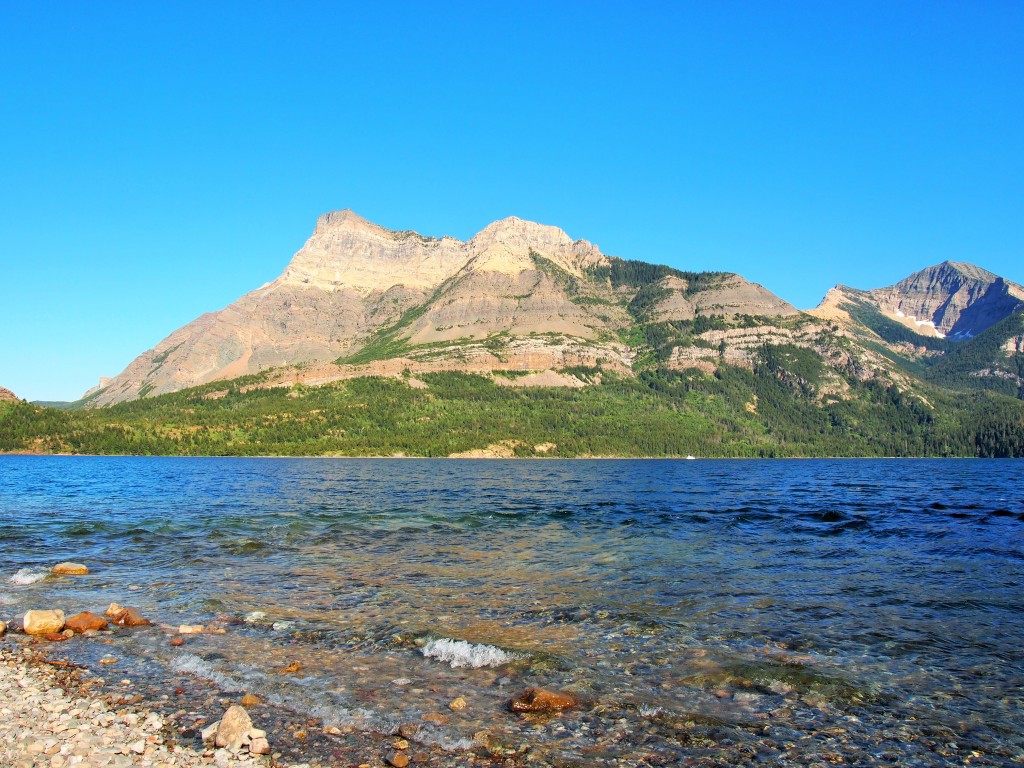