It’s clear that writing about our Canadian trip is going to take me a while. But since we haven’t been sitting around, I’m going to sprinkle current trips in the mix.

A few weekends ago, before the full barrage of the fall semester hit, we escaped to Nevada with Ryan and Lisa for a weekend camping trip in the Ruby Mountains southwest of Wells. By the time we decided to go, all of the reservable spots has been booked. But 8 or 9 sites were set aside for walk-ups (basically first-come, first-served), so we took our chances and hoped to get a site when we arrived. We left SLC late in the afternoon and arrived early in the evening just in time to snag a spot close to the lake. The campground is small – only 26 sites – and compact. Dwarf aspen provided decent privacy, but there was little to buffer the sound from other sites.

In the morning, we hung around leisurely – lounging lakeside, reading, napping, floating on the lake. Once the sun hit the campground, it got pretty warm and more day trippers arrived at the lake. The lake isn’t terribly large, and the shoreline did fill up. But surprisingly, out on the lake, it remained fairly empty. (Of course, I took all my photos before the people arrived.)

Sasha swims with her toy

We seek shade in the shadow of the dam walls

A year or so ago, Zach and I heard about Ruby Mountain Brewing somehow. We knew it wasn’t a traditional brewery with regular hours for tastings, but we were interested in checking it out. Their website directs you to call to set up a tour, so Zach called the day before we left SLC. After a couple tries, he got an answer, and we were told we could stop by Saturday afternoon around 1pm.

Though we could see the brewery from our perch in the mountains, we had to drive back to Wells and then head south to get there. There wasn’t a sign directing traffic from the highway, but since we knew it was in the Clover Valley we managed to find our way. There wasn’t anything which indicated the presence of a brewery other than a small sign at the entrance to the property. We had tried to call from town with no answer, so when we arrived none of us were certain there would be anyone waiting. Zach waved us into the warehouse, and we found Steve (owner, brewmaster, one-man show) waiting for our arrival.

It was the most casual and enjoyable brewery tour/tasting I’ve ever had and one that won’t be repeated. Steve’s grandson was a fan of our arrival and of the dogs (a joy that wasn’t reciprocated), and he constantly sought to distract Lisa and I with his antics. We leisurely tasted four of his beers – an amber, a hazy IPA, a hefeweizen, and a porter – and stood around chatting about a variety of topics, including of course the craft beer industry. We were there for 2.5 hours and left with a case of beer and a growler full of porter. 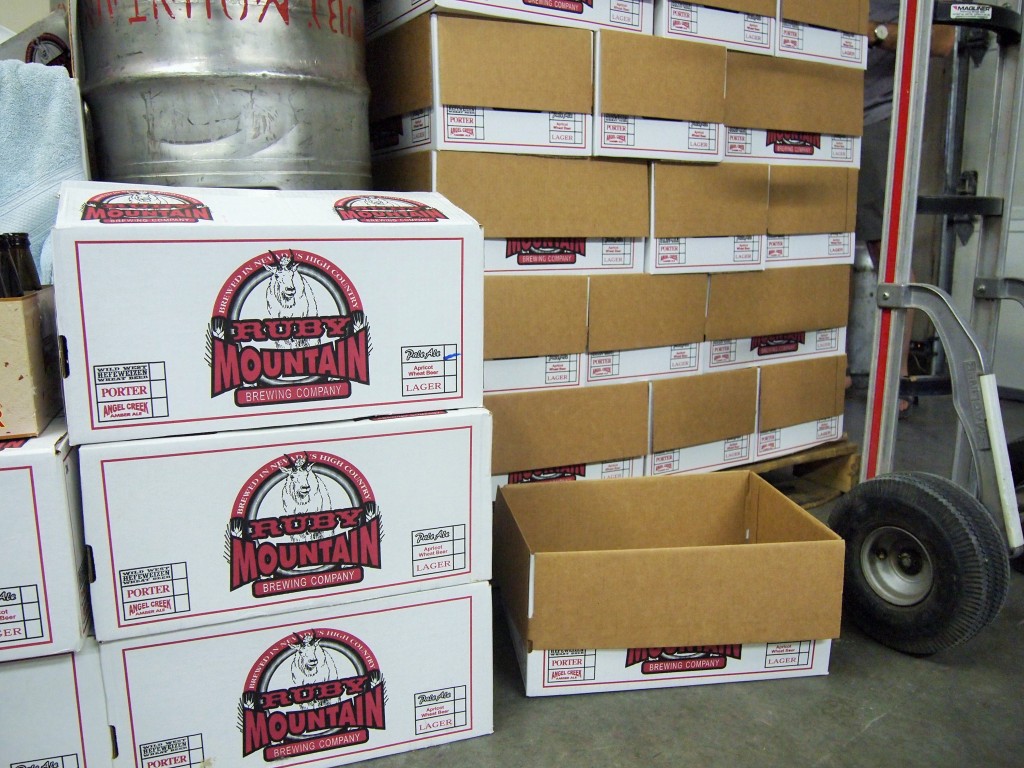 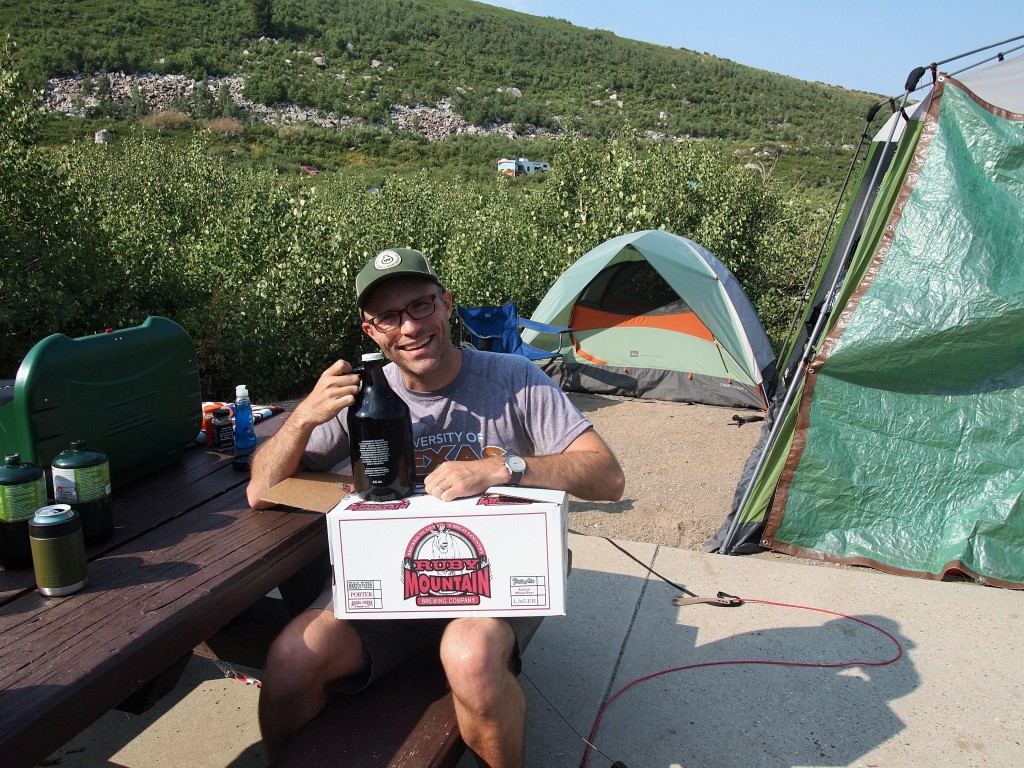 We arrived back at the campground in the heat of the day and got ready to go swimming/floating/kayaking. We only managed to stay out for an hour or so because as soon as the sun dipped behind the cirque, it became cool. Though it spoiled our lake time, it was a welcome relief.

In the morning, we packed up our site and had an odd encounter with the campground host. He previously thought we overpaid, then realized we had an extra car and were correct, then came back the next day to charge us for the extra car. It quickly escalated, and he drove off cursing. Needless to say we were happy to leave. 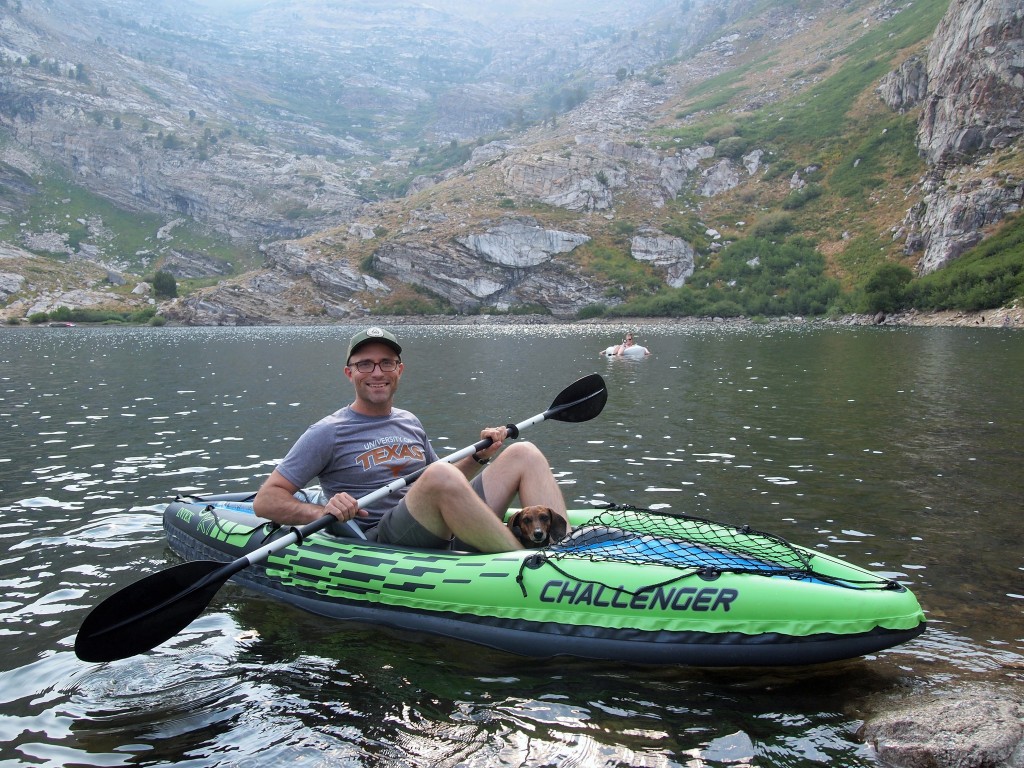 Zach and I decided to hang back and do the short hike to Smith Lake from the opposite end of the campground. There wasn’t any information at the trailhead, and I thought it was a 4 mile loop I had read about. Actually, it was much shorter at only 2.4 miles round trip. We began early enough that we were the only people on the trail and soon the only people at the lake. (A father and son were heading down from their overnight backpacking trip when we arrived.)

Smith Lake was tranquil, and it was nice to hang out without any objective for a while. We continuously tried to push Tru into the water, but he resisted our efforts. The lake was essentially just on the other side of the cirque, but felt farther away in its secluded basin. I regretted not bringing my book, so we could stay longer. About halfway down we encountered six hikers headed up, and I realized we had timed it just right.

Hopefully we can make a return trip to the Ruby Mountains and visit a different, less frequented area. There’s always so much more to explore. 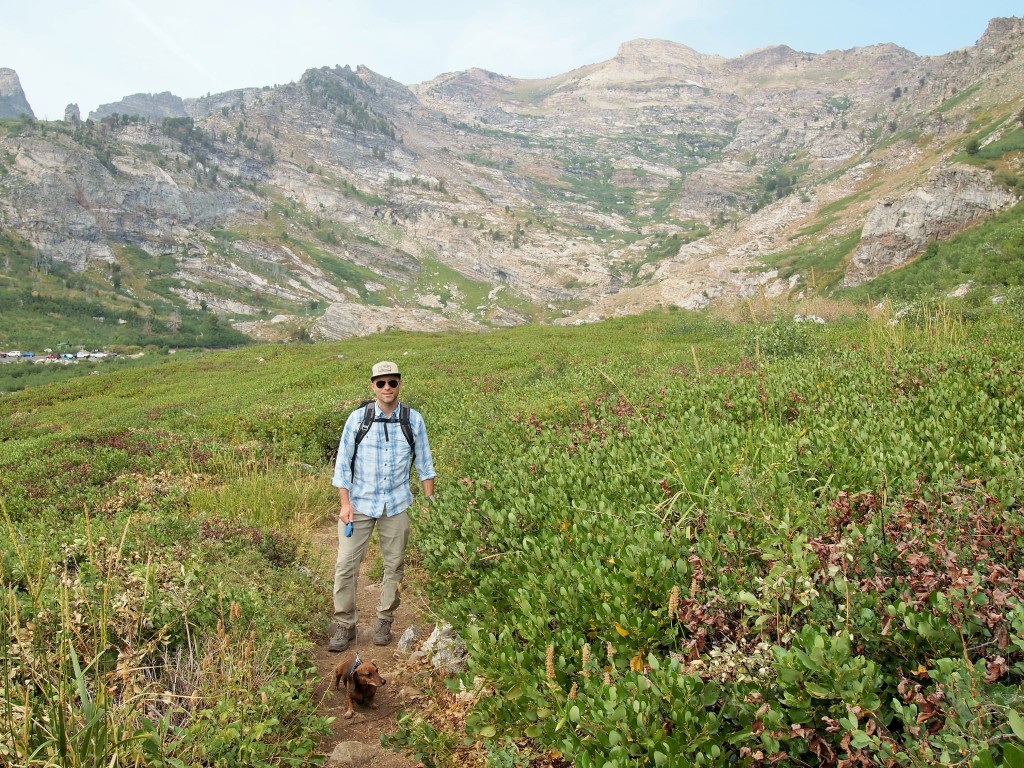 A cool view of the campground and Angel Lake below 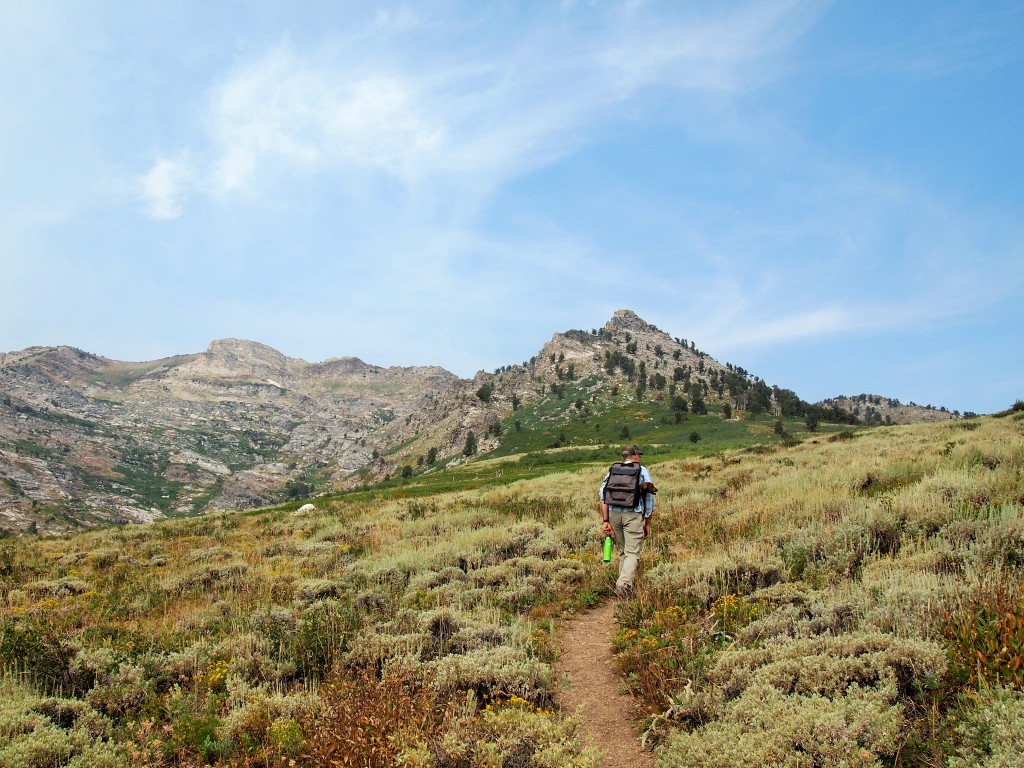 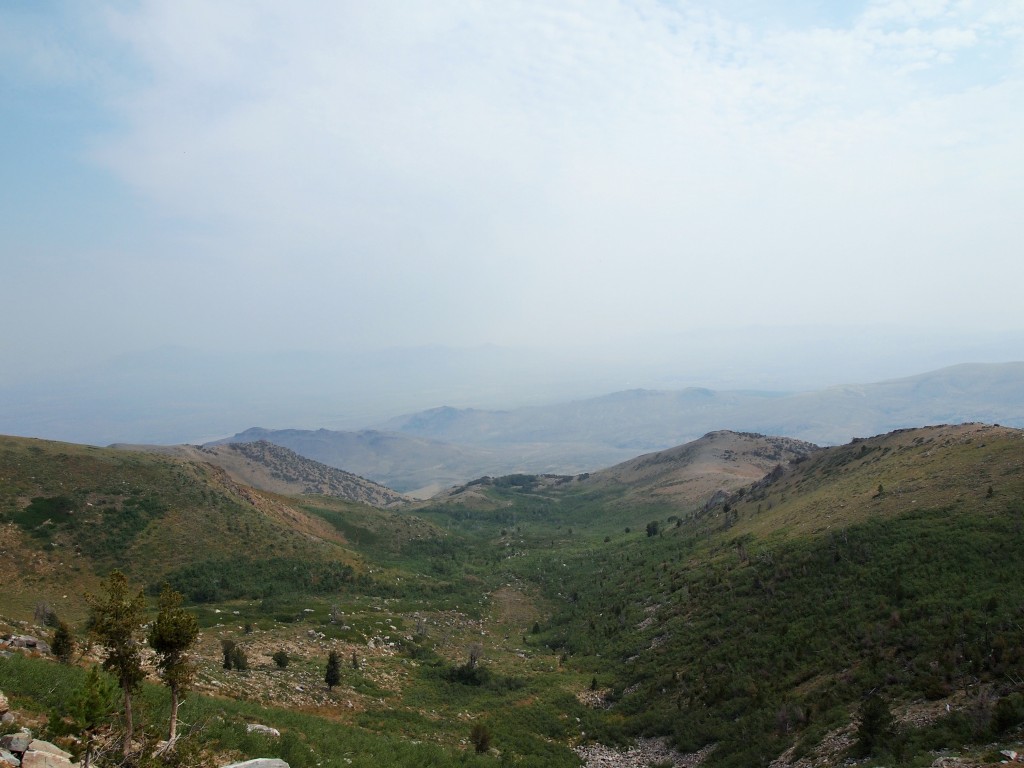 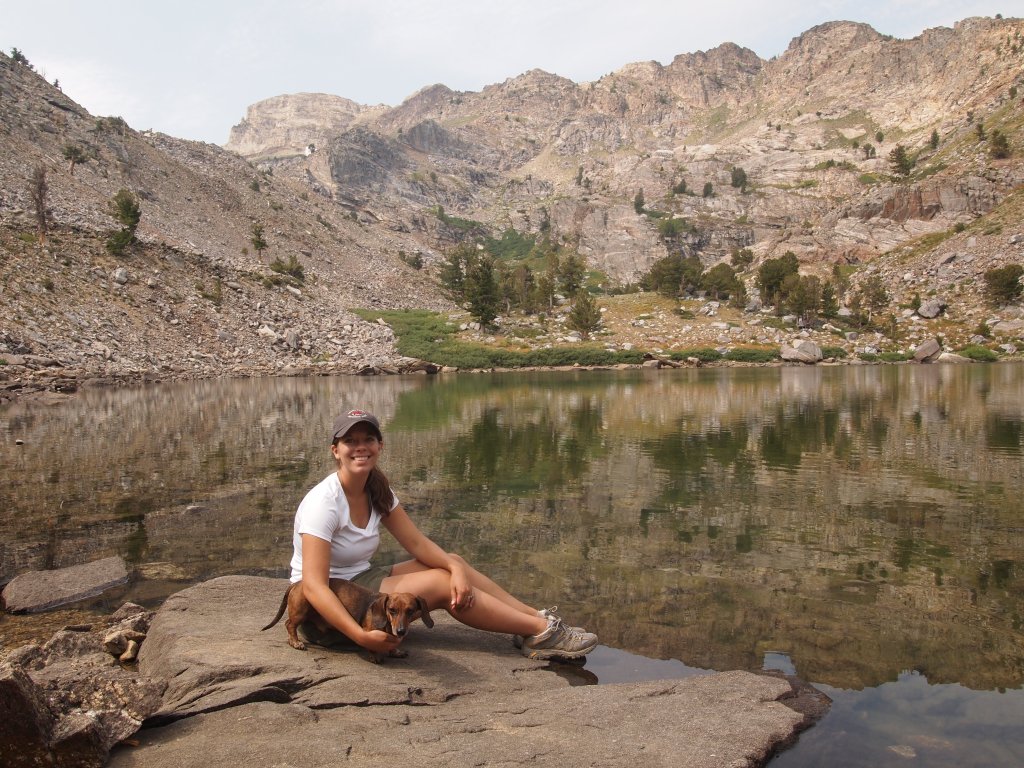