Today marks 3 months that we’ve been living in Korea! Time sure does fly by.

Last Sunday we checked another site of our list: Deoksugung.

Deoksugung was originally built as a villa for a king’s brother in the 15th century. When the Japanese invaded in 1592, it was used as the temporary residence for King Seonjo. But the palace is most significant because it was expanded and named Deoksugung at the end of the 19th century when King Gojong moved there and declared himself the Emperor of the Daehan Empire. It’s also smack dab in the middle of the city next to City Hall.

Entrance to Deoksugung, Daehanmun – this gate dates back to a 1906 reconstruction

Surrounded by the city

Deoksugung is interesting because it has two distinct styles: Korean and Western. The first part we toured was the Korean area. I really love the juxtaposition of the traditional Korean buildings with the modern city in the background.

Set up for a performance 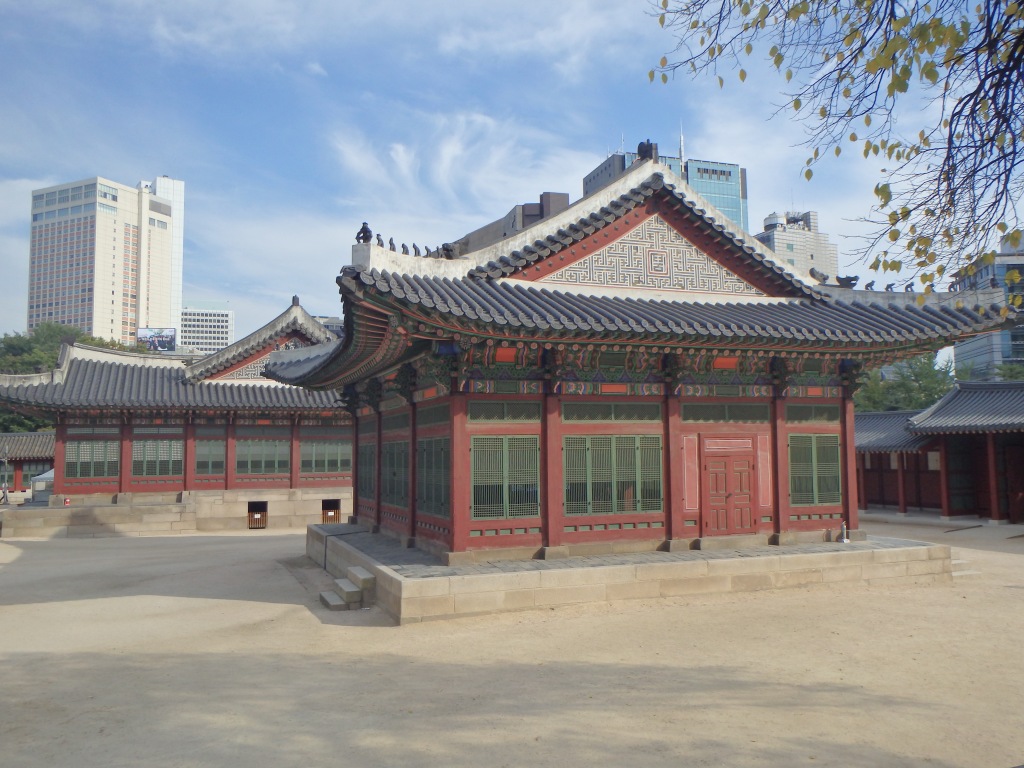 Junghwajeon Hall, the main throne hall, burnt down in 1901 and was rebuilt in 1906 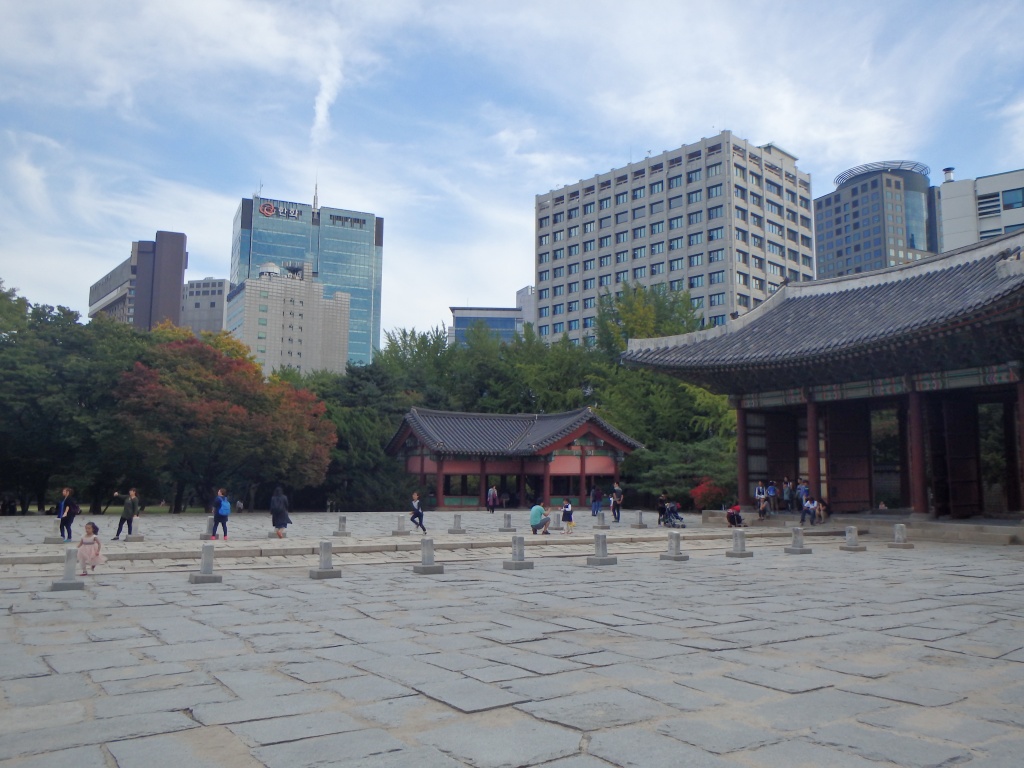 Then we saw the Western area. It was a little confusing at first! We didn’t know the history of the palace and didn’t understand why there were two giant neoclassical buildings next to the traditional Korean buildings. Seokjojeon Hall was built by Emperor Gojong as his royal residence. It was designed by a British architect and wasn’t completed until 1910.

This building was completed much later in 1939 as a museum for the Yi Royal Family (the last emperors of Korea). It is a division of the National Museum of Contemporary Art

But the most interesting part of this palace is Jeonggwanheon Pavilion. The Pavilion was commissioned by Emperor Gojong after his year-long stay at the Russian Legation. At the end of the 19th century both Japan and Russia were vying for influence in Korea. After Queen Min (Empress Myeongseong) was assassinated at Gyeongbokgung in 1895, the King and Crown Prince sought refuge at the Russian Legation (as it was believed that the Japanese Legation had ordered the assassination). During his time at the legation, King Gojong developed a taste for coffee. So when he left the legation in 1897, he decided to have Jeonggwanheon Pavilion built so that he could enjoy a cup of coffee and receive visitors. So essentially he built himself a coffee house! 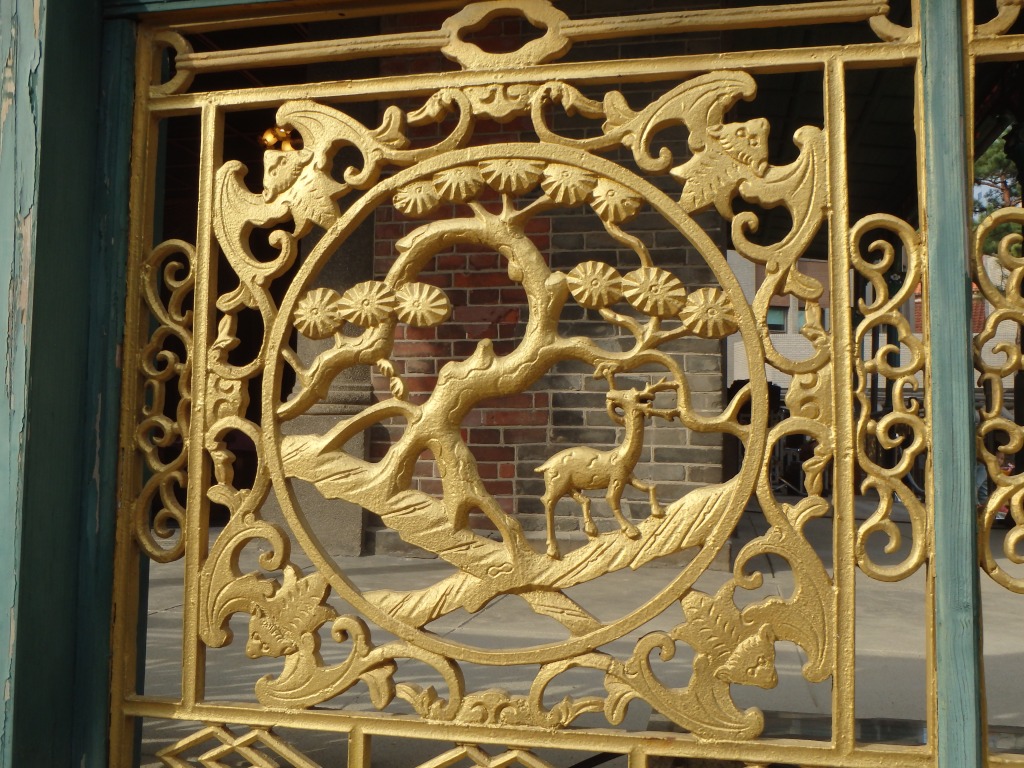 Emperor Gojong wouldn’t be at Deoksugung long. In 1905, Japan defeated Russia in the Russo-Japanese War and forced Korea to sign the Protectorate Treaty which gave Japan control of Korea’s foreign relations. Emperor Gojong tried to fight the treaty by sending a delegation to the Hague Convention in 1907 but was unsuccessful. The Japanese forced him to abdicate the throne in favor of his son, Crown Prince Yi Cheok. (His son, Emperor Sunjong, would only rule until 1910 when the Japanese annexed Korea.) After his abdication he was confined to Deoksugung until his sudden death in 1919 (it’s believed that he was poisoned by the Japanese).

As we were leaving the palace we walked into the changing of the guard, so we stayed to watch! 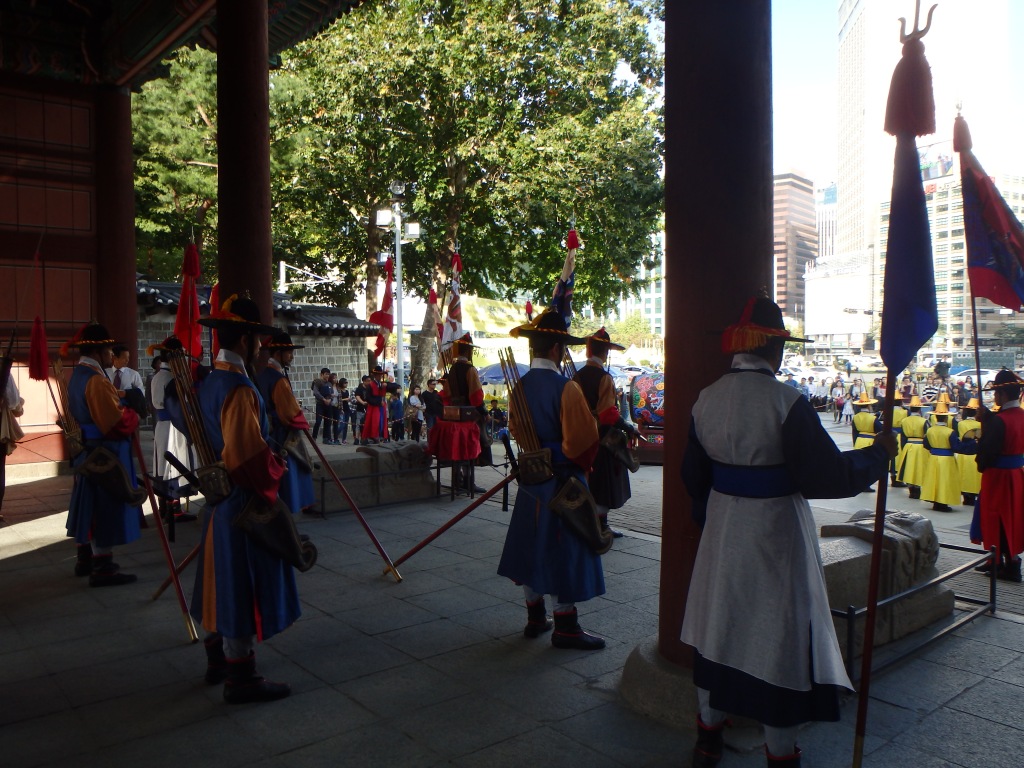 Here’s a brief video (you can see City Hall in the background):

We walked along the Cheonggyecheon Stream for a while too. It was previously an elevated highway but is now a 5.8km stretch of walkways and bridges. It’s a lovely spot in the heart of the city. 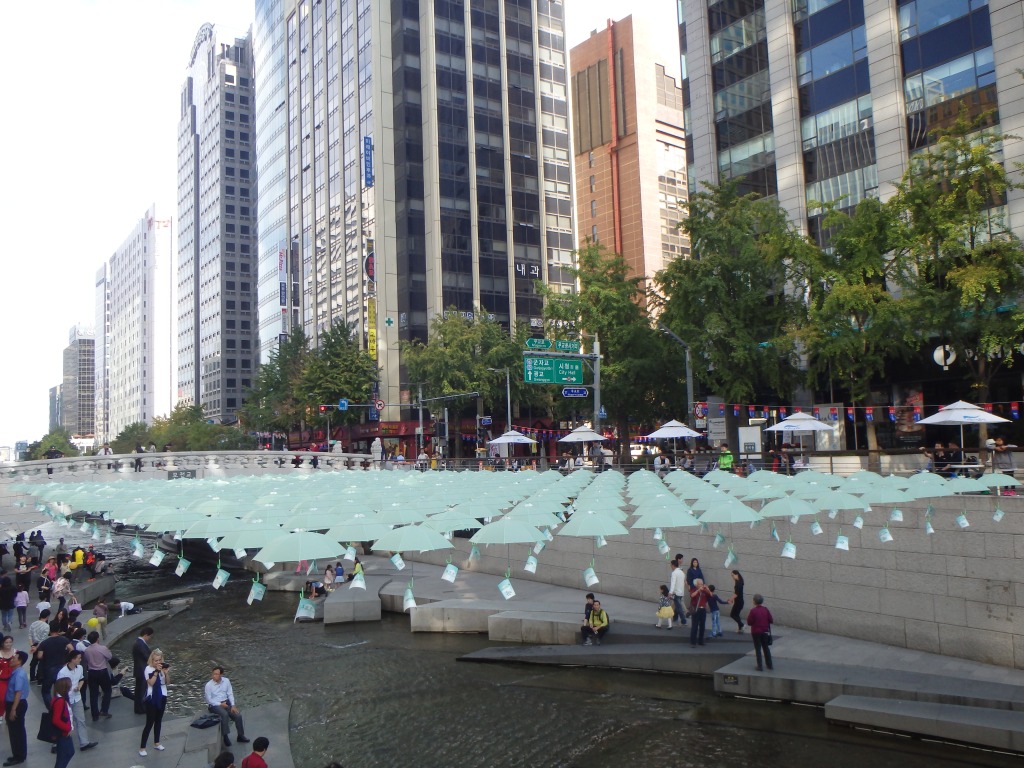 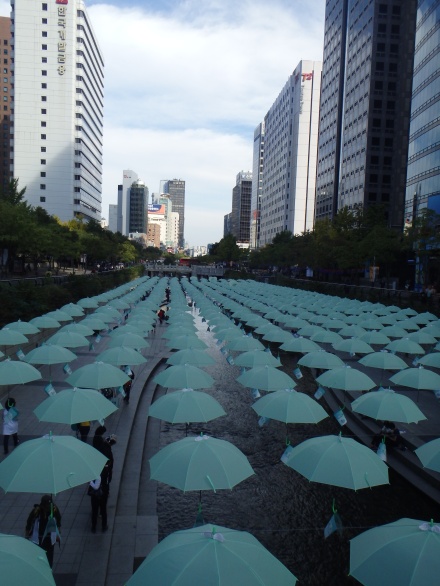 umbrellas suspended over the stream 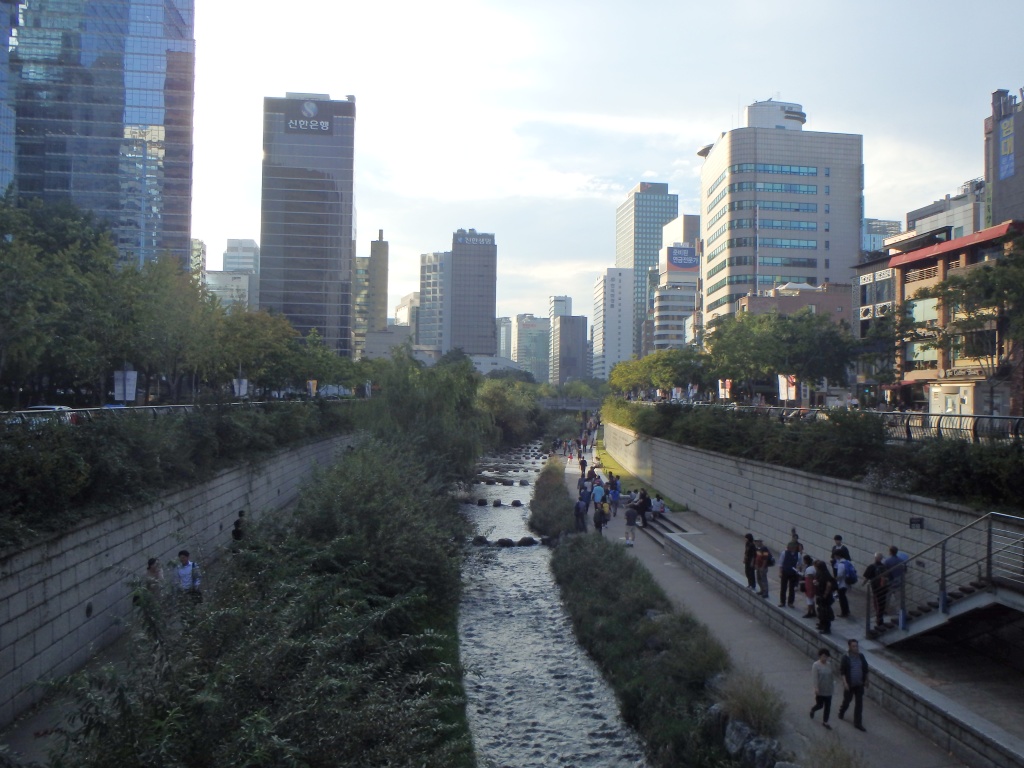 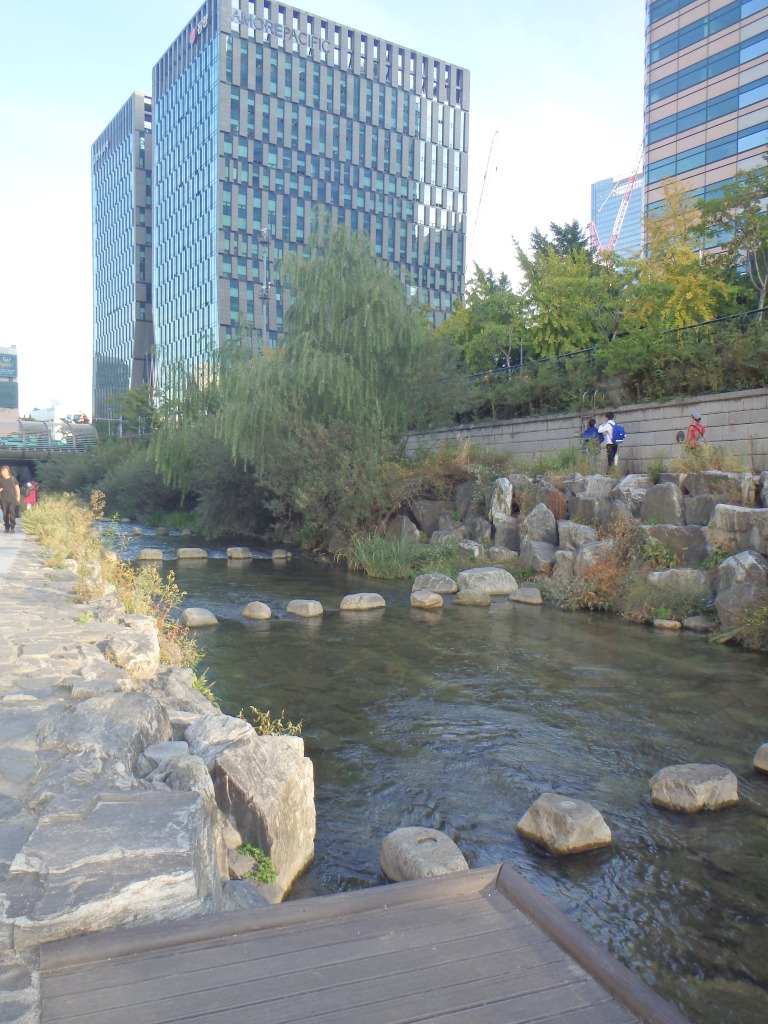 This is a mural of the procession of King Jeongjo and his mother, Queen Hyegyeonggung, going to visit his father’s tomb

Here are some final images from the day: 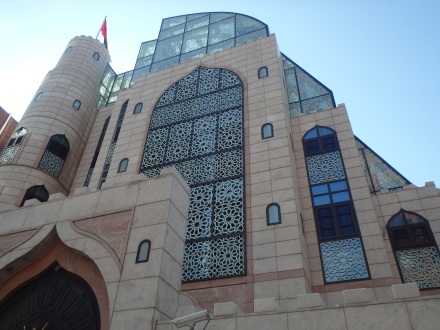 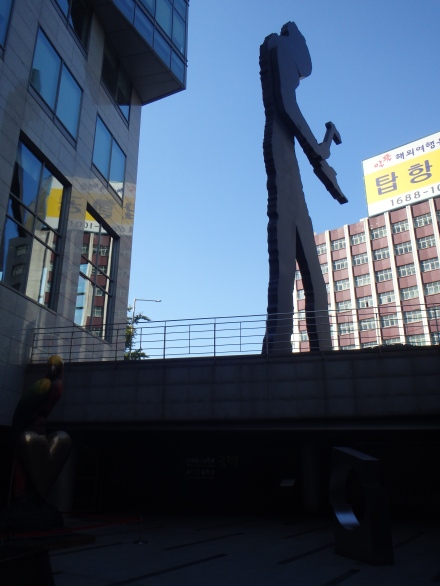 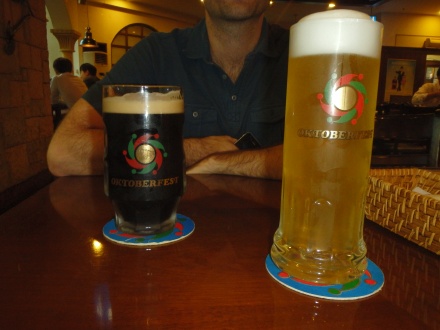 We had a beer at a place called, Oktoberfest. It was alright 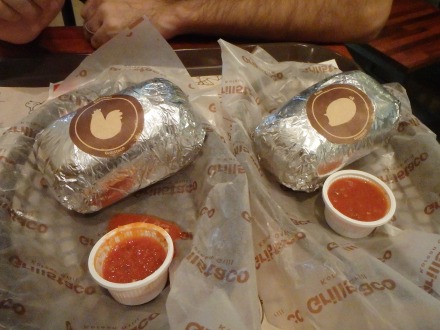 We ate at a burrito place called Grill5. I had chicken and Zach had pork. Aren’t they cute and tiny?