This past weekend we did a temple stay at Sudeoksa. We went with the travel club, Adventure Korea, like we have on two previous trips, here and here. We don’t particularly enjoy going on group trips but in Korea we feel more limited by the language barrier and the lack of reliable information. The other trips we went on were day trips so this was our first overnight outing. On the whole Adventure Korea has been a good way for us to do some activities that would have been more daunting on our own but it’s still rather disorganized (there is always general confusion) and sometimes ridiculous. On this trip we used a giant charter bus for a group of 9 from Seoul…

Sudeoksa is a few hours drive from Seoul in Chungcheongnam-do. It is unclear when exactly the temple was constructed but it is believed to have been built between 554-597 during the Baekje Kingdom. It is the only remaining temple in Korea from that era, and there are around 300 monks and nuns who live on the grounds. We eventually arrived around 1pm, an hour later than intended. We were surprised by what we saw: a bustling tourist area with restaurants and shops at the foot of the mountain. I had anticipated a quiet mountain-side temple, so our first impression wasn’t great.

This is never a good sight…

Lots of funky roots and greens for sale 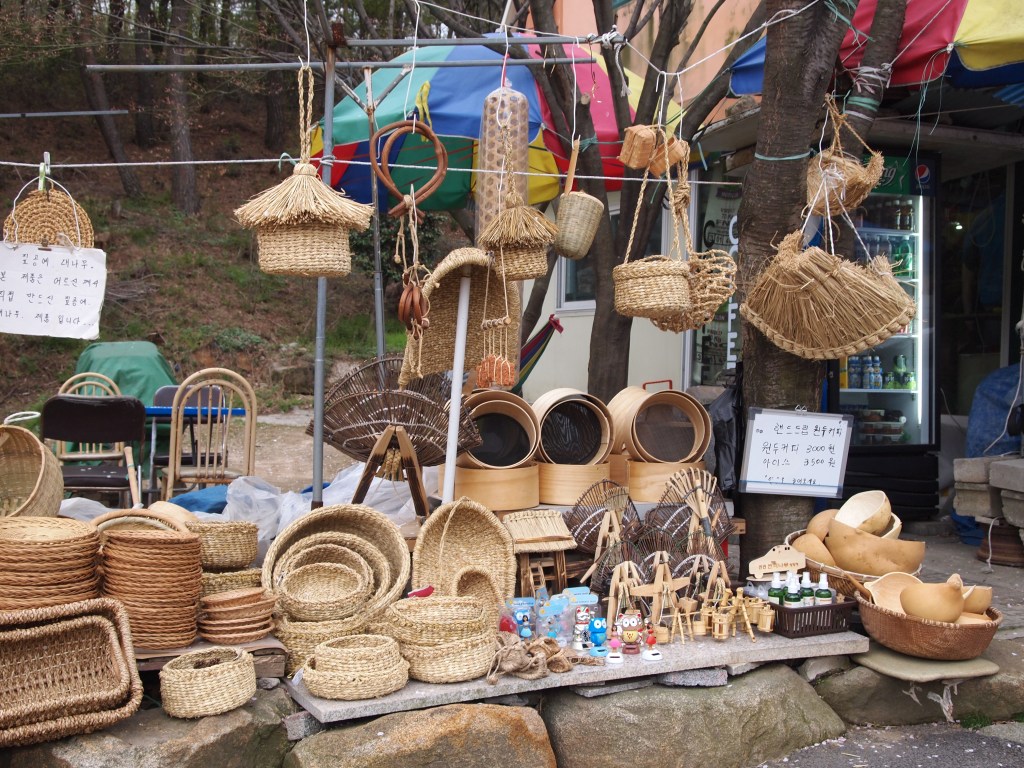 After a little while, our group met at the entrance gate to walk up to the temple and check into our temple stay. I was surprised by the amount of tourists out for the day and we (a group of 12 foreigners) quickly became the attraction of interest for many of them. We were given clothes to change into and our room assignments for our stay. Then we met the nun who would be our guide to Buddhism. She was wonderfully cheerful and enthusiastic. She didn’t speak any English so she was always accompanied by a translator.

Our room was a box with one sad window

Such a flattering outfit, right?

This get-up attracted even more attention

The translator and nun

The first thing we did was listen to some traditional Korean music which Zach and I weren’t really jazzed about since we’ve heard quite a bit of it in our time here. Thankfully we didn’t stick around for too long. Next we were taken to make our own lanterns which I was really excited about. Unfortunately, instead of making our own lotus lanterns we made giant lanterns that will be carried in the parade Sudeoksa is having in a few weeks for Buddha’s Birthday. It was a nice gesture, but I was really looking forward to making my own lotus lantern to take home. I wish we had been given an option… We were given A LOT of time to decorate the lanterns. I think the entire group felt really put on the spot. Plus, if you aren’t an artist (me and Zach) it’s not that exciting to decorate a lantern. Nevertheless, we both decided to do Texas-themed lanterns. 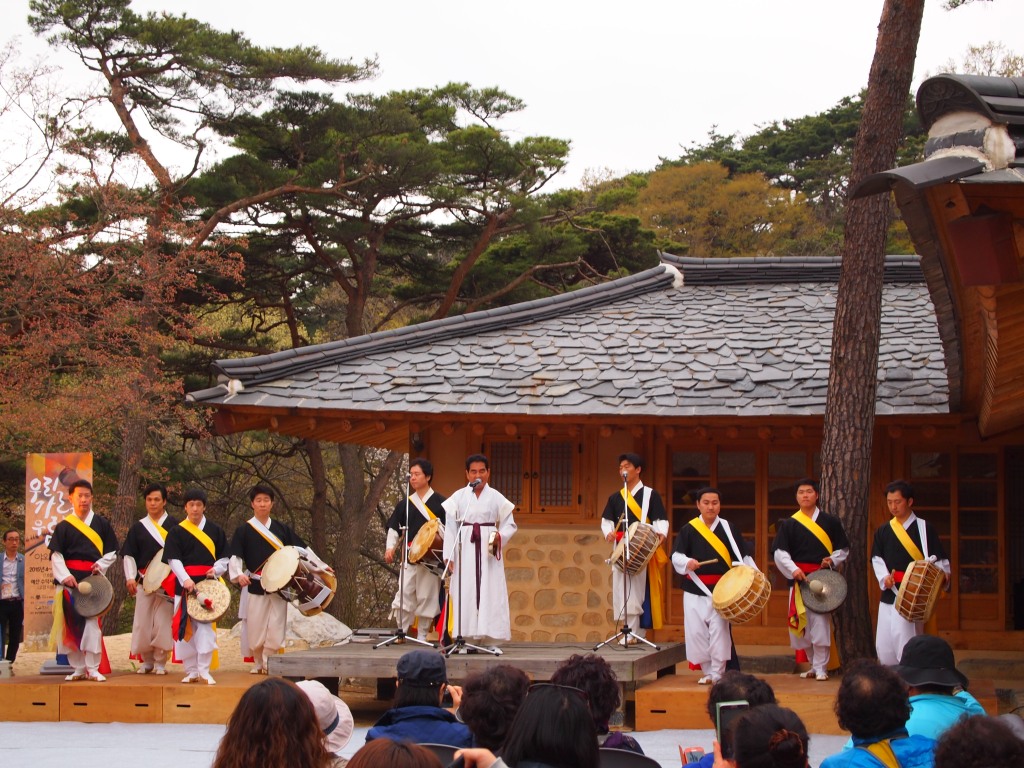 I think this was a shamanism ritual dance

Some of my sad drawings- those are supposed to be bluebonnets 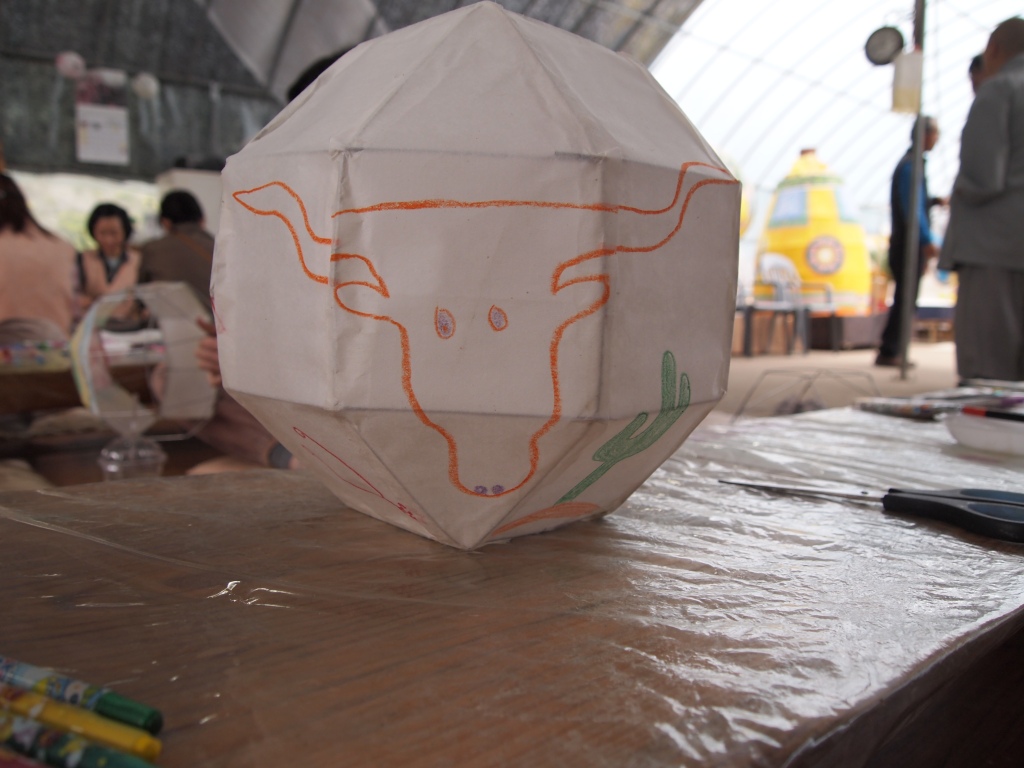 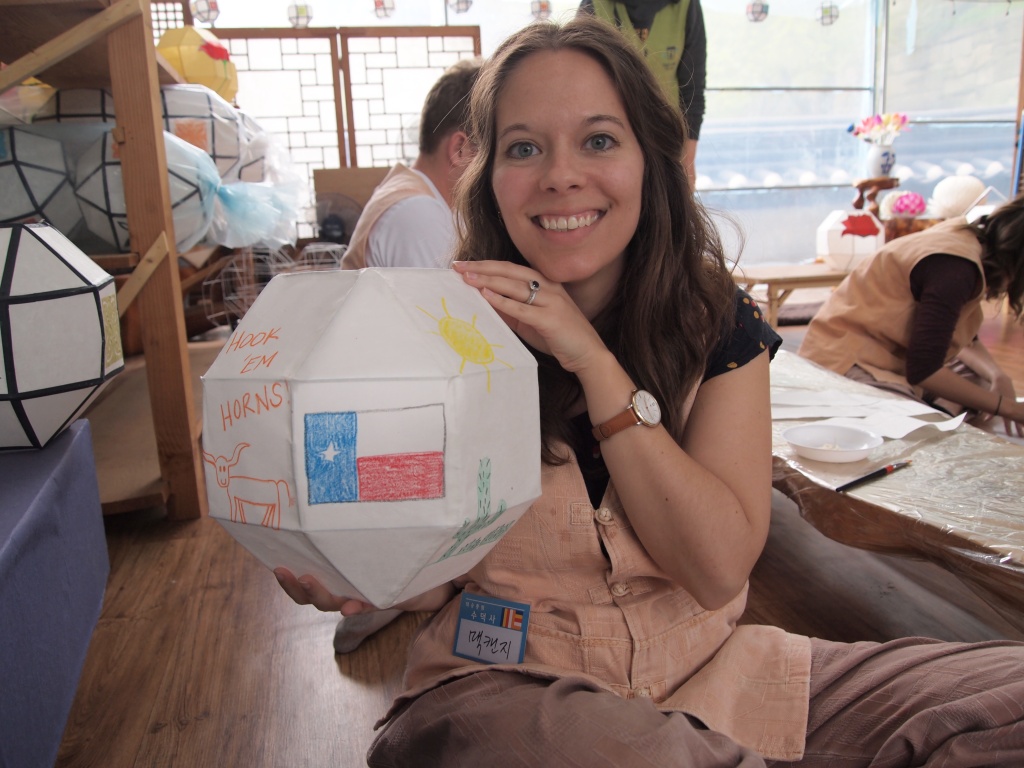 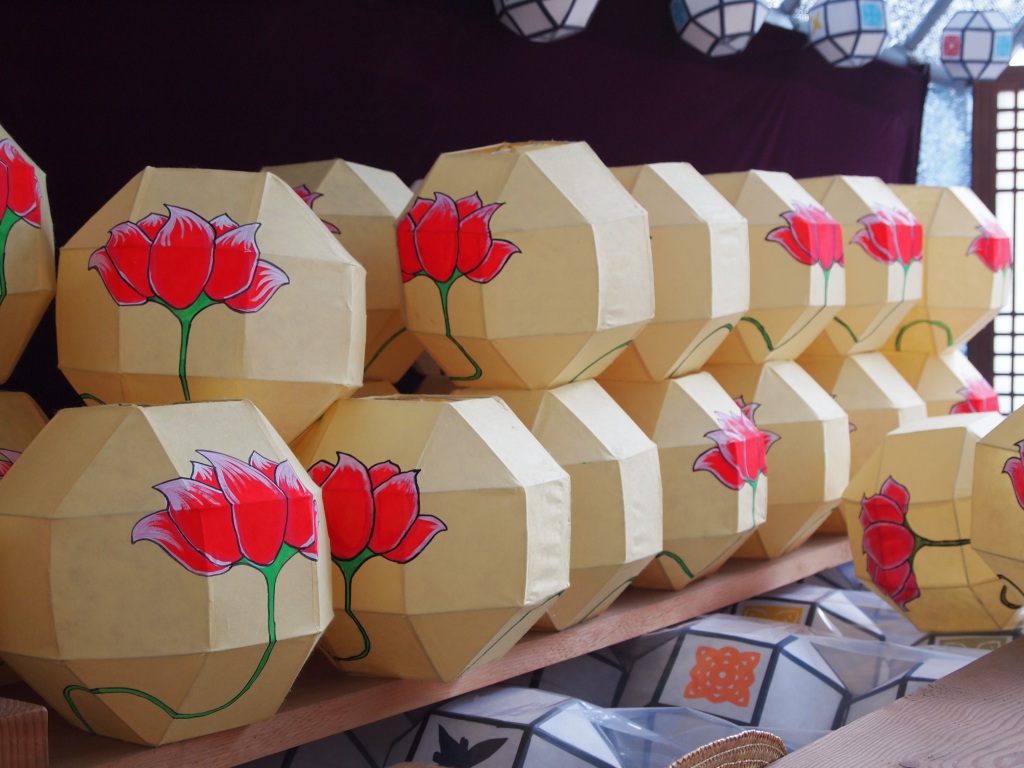 Lanterns with lotus flowers for the parade

Our lanterns lit up later in the evening

Zach and I completed our lanterns first so we decided to walk around the temple complex while everyone else finished up. It was our first chance to walk around and actually absorb the space. It was a beautiful day, and it ended up being our only real chance to enjoy some free time. 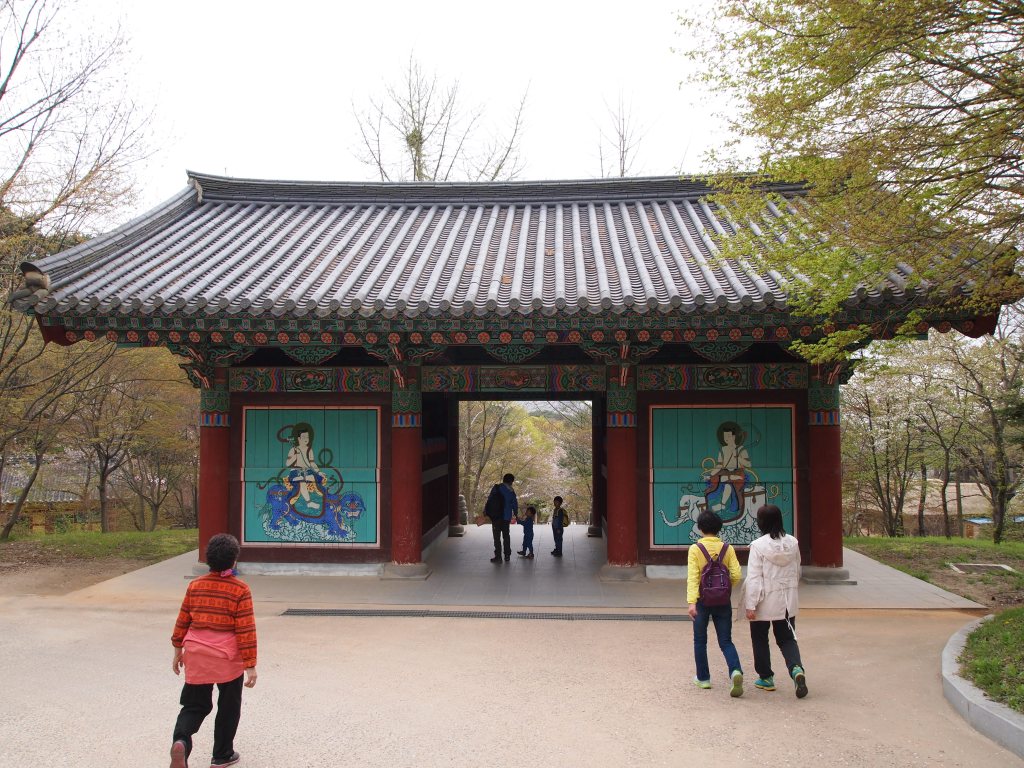 This is one of the Vajrapanis in the gate. He represents the power of all the Buddhas 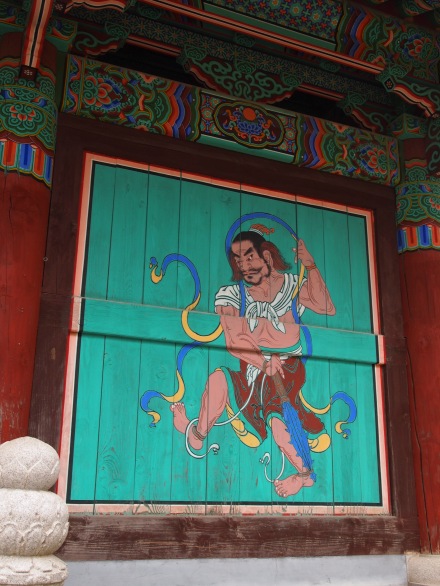 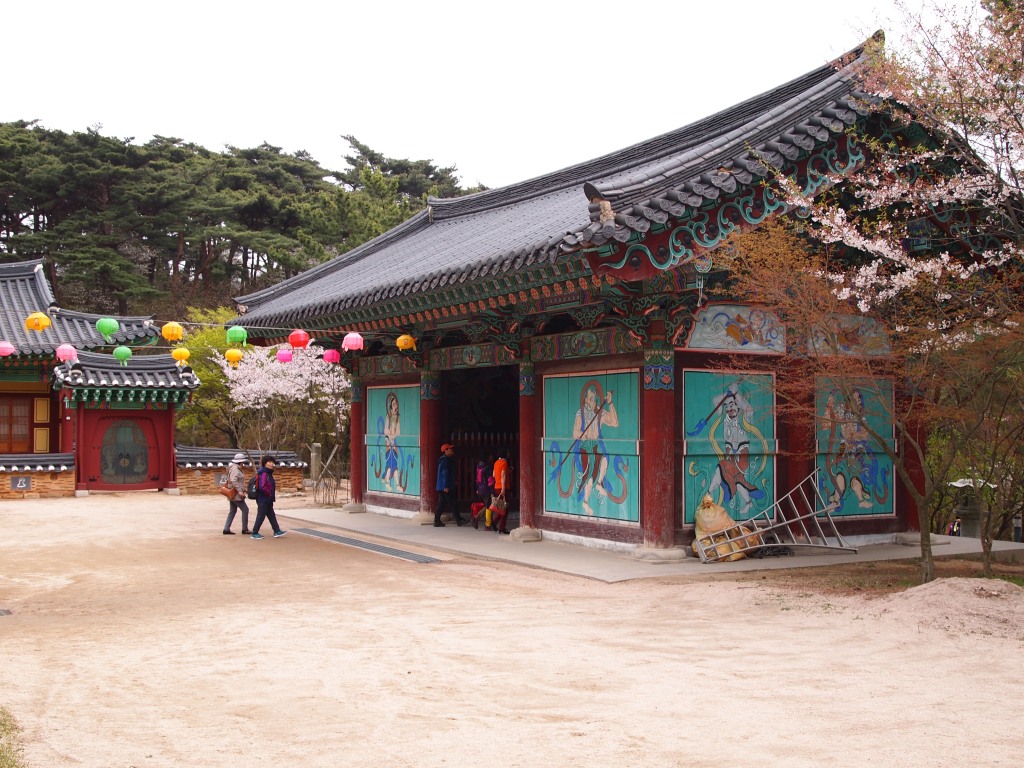 Sacheonwang-mun as I walked away 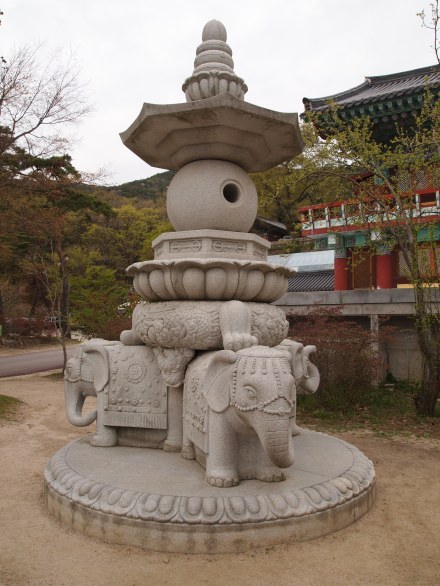 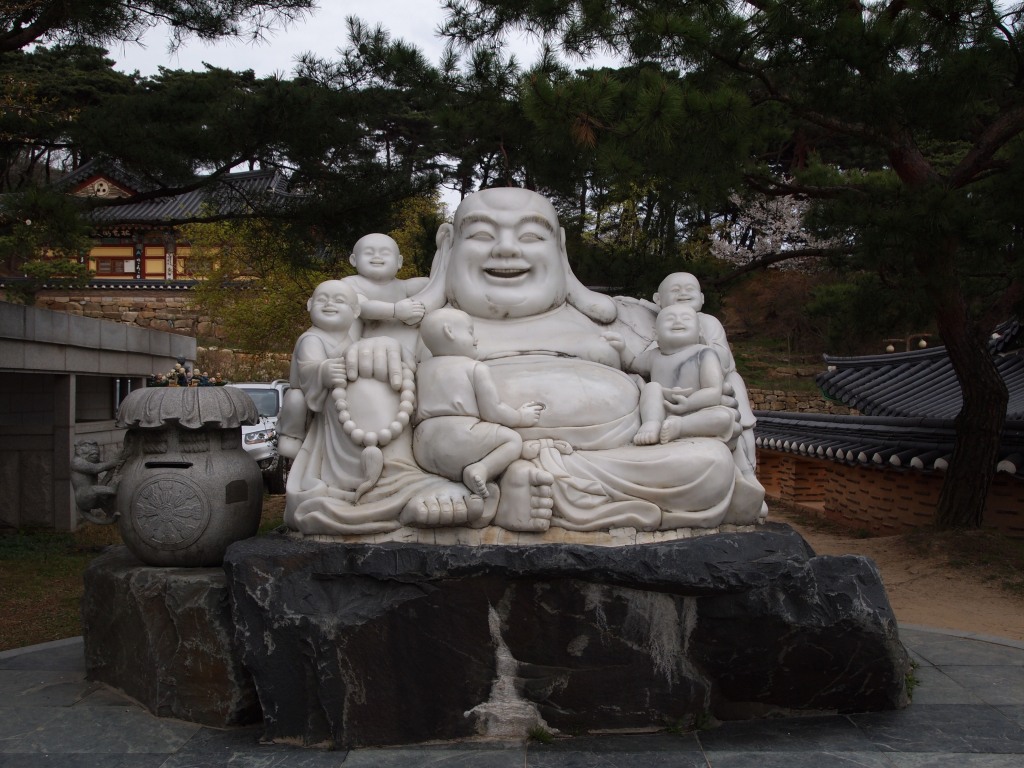 Zach standing in front of Hwanghajeong-ru – doesn’t he look happy!? 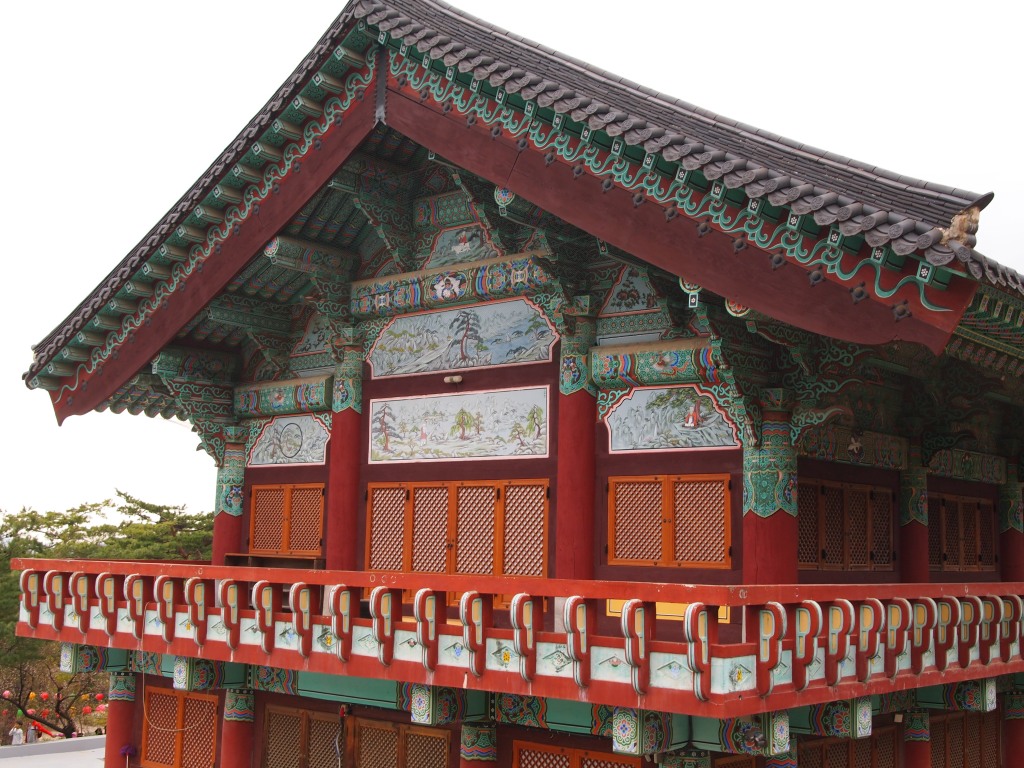 The view from the top of the temple complex 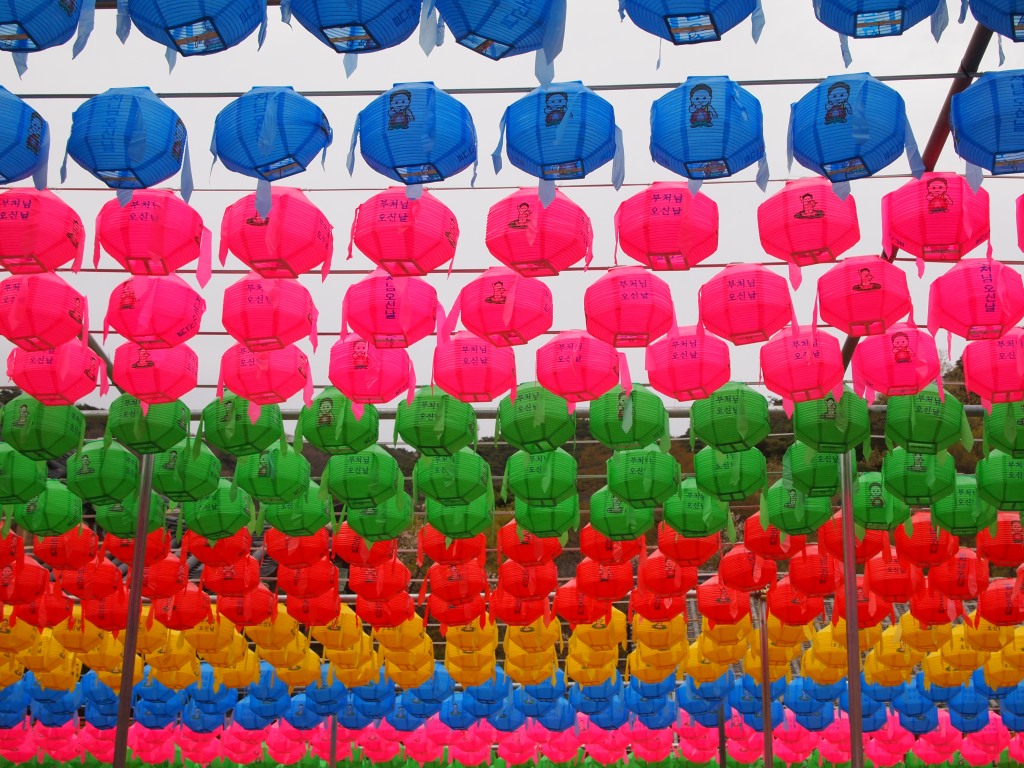 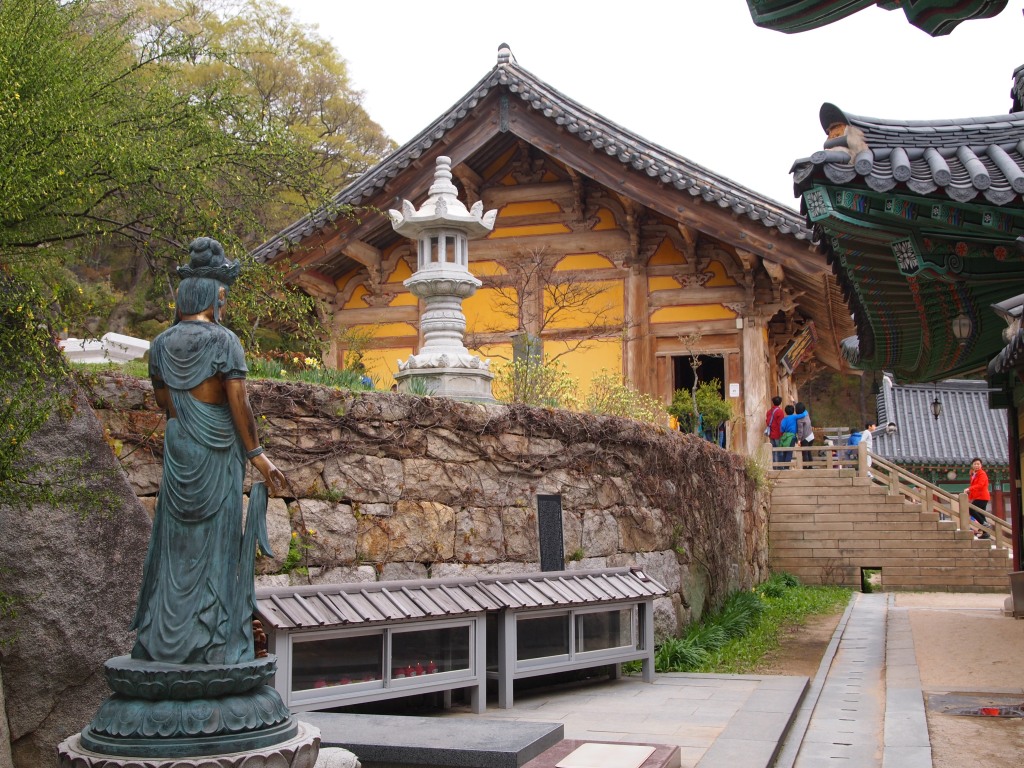 Last fall Zach and I did a temple stay in Japan at Mt. Koya. When I signed us up for this trip we both imagined that it would be similar to what we experienced there: relaxation, observation, tranquility. We were soooo wrong. Once the entire group finished their lanterns we were taken into Daeunjeon to learn how to bow for the evening and morning services. At Koyasan we had simply observed the early morning ceremony, but here we were going to be active participants.

After our introduction to bowing and dinner, we had a small window of time to prepare for the evening ceremony. Then we gathered in front of the dharma drum to wait for the drumming which signals the start of the ceremony.

The dharma drum was beaten by a rotation of 4 monks

We followed the monks into Daeunjeon which was illuminated only by candlelight. It was a gorgeous sight – the soft glow of the candles lent an intimacy to the structure that wasn’t there in the daylight and the vibrantly colored paintings on the walls jumped to life – but one I couldn’t admire for long since I had to focus on not embarrassing myself. I would have preferred if the participation was optional. I felt odd performing the bows since they were done insincerely. I would have rather silently observed the ceremony. However, the ceremony was brief and before I knew it we were finished.

Unlike many other religions,  there isn’t a central deity in Buddhism who is being worshiped, instead it is the ideal self within each individual that is being praised during worship. The quest of every Buddhist is to find their inner Buddha, that is, their true or ideal self. That ideal self has rid itself of ignorance and craving and has found enlightenment. 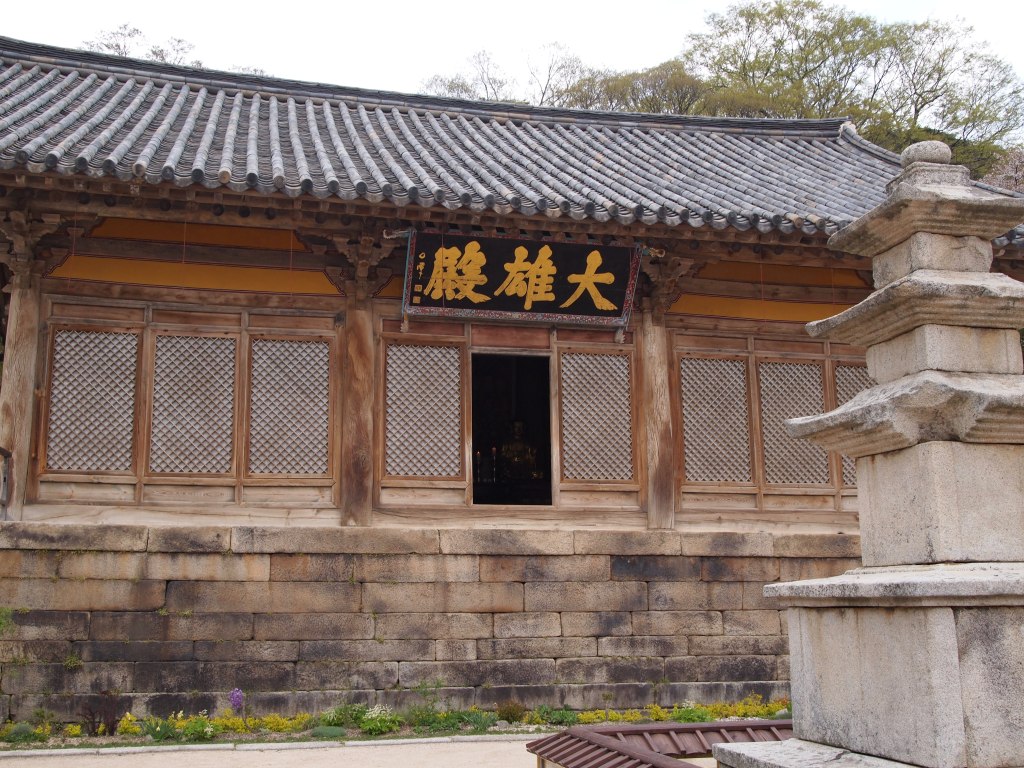 Daeunjeon, was built in 1308 and is one of Korea’s national treasures. It is the oldest wooden structure still in existence in Korea.

But our lessons in Buddhism were not yet over. Next we were escorted to another building where we performed 108 (!!!!!) full bows while stringing our own prayer beads – one by one, bow by bow. A full bow consists of: getting on your knees gracefully, sitting back on your heels and placing both hands palm down in front of you, bowing to the floor and raising both hands palm up to your ears, placing them back on the floor, and gracefully getting back up from the balls of your feet. After 108, my (already worn out) knees felt like they would never recover. I think Zach’s scowl became permanently fixed to his face at that point. I couldn’t take any photos but I got a couple from our Adventure Korea tour coordinator. 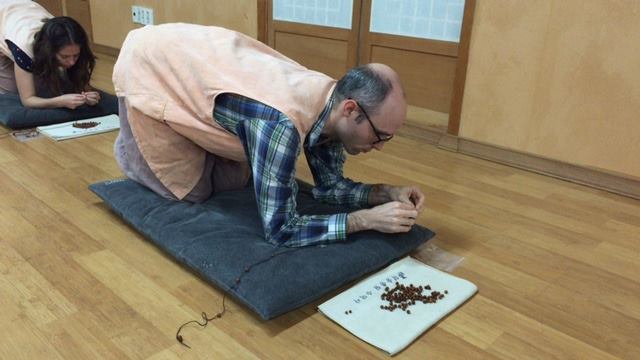 Thankfully we were finished for the evening, and after a short tea ceremony we were able to go back to our rooms and sleep. In the morning we were up at 3:00am for the 3:30am ceremony. Our legs still hurt from the previous evening’s activities and with each bow I felt I couldn’t do another. I definitely felt a lot less inspired than the previous evening. After the ceremony we were taken for another lesson in Buddhism, this time in meditation. After only a few hours of sleep, learning how to meditate was not high on our list of priorities. First we sat up and meditated for 10 minutes, then we laid down to meditate for 45 minutes or so. Honestly, I’m pretty sure everyone fell asleep during that part. I did! Someone was even snoring! After our morning meditation we did some horrific Buddhist stretches where we were all kicked in the thigh by our nun guide. She must have really been trying to test our limits. After stretching we were finally released. We ate breakfast and had an hour to rest before our morning hike.

Did I mention it was raining?! We began our “hike” up Deoksungsan at 7:15am – ugh, in Korea hiking equates to climbing stairs. It was lightly raining when we began but halfway up it started pouring. Zach didn’t bring his umbrella so he got drenched. I had mine and a rain jacket but climbing up a mountain for no real reason, in the pouring rain, on a few hours of sleep didn’t win this trip any redemption.

It wasn’t so terrible at first… 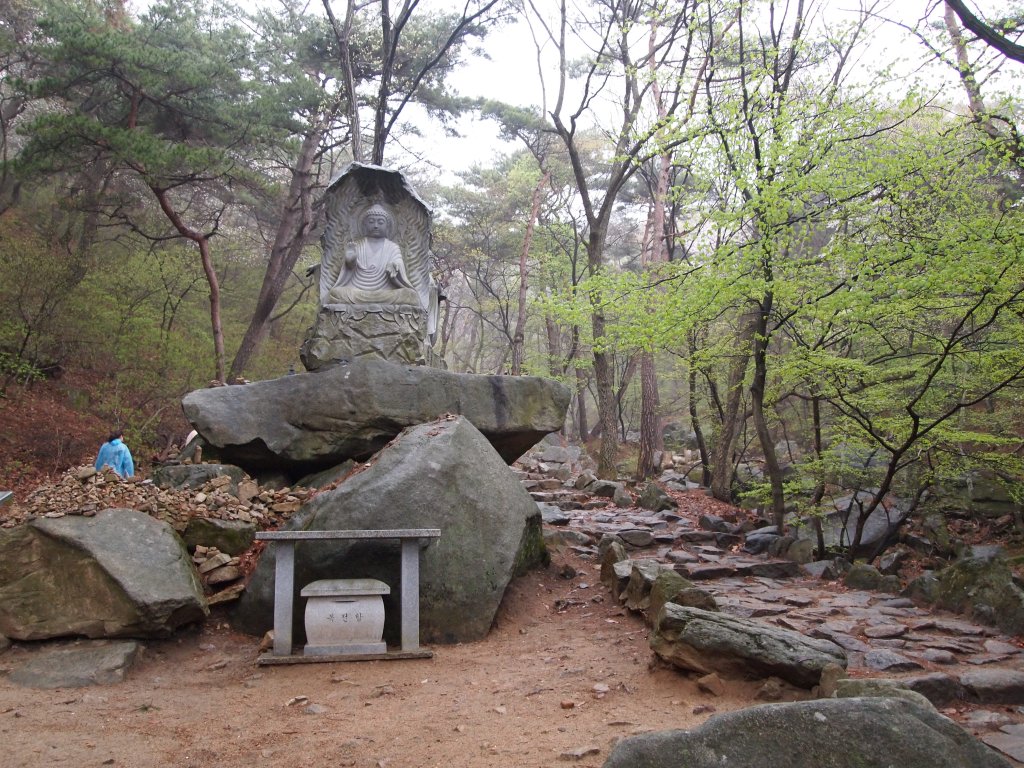 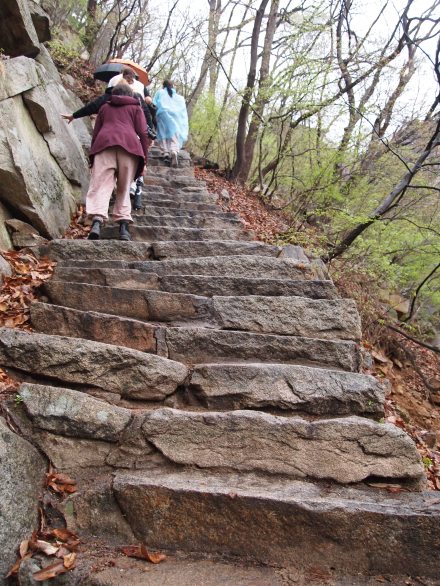 Has Korea heard of switchbacks?! 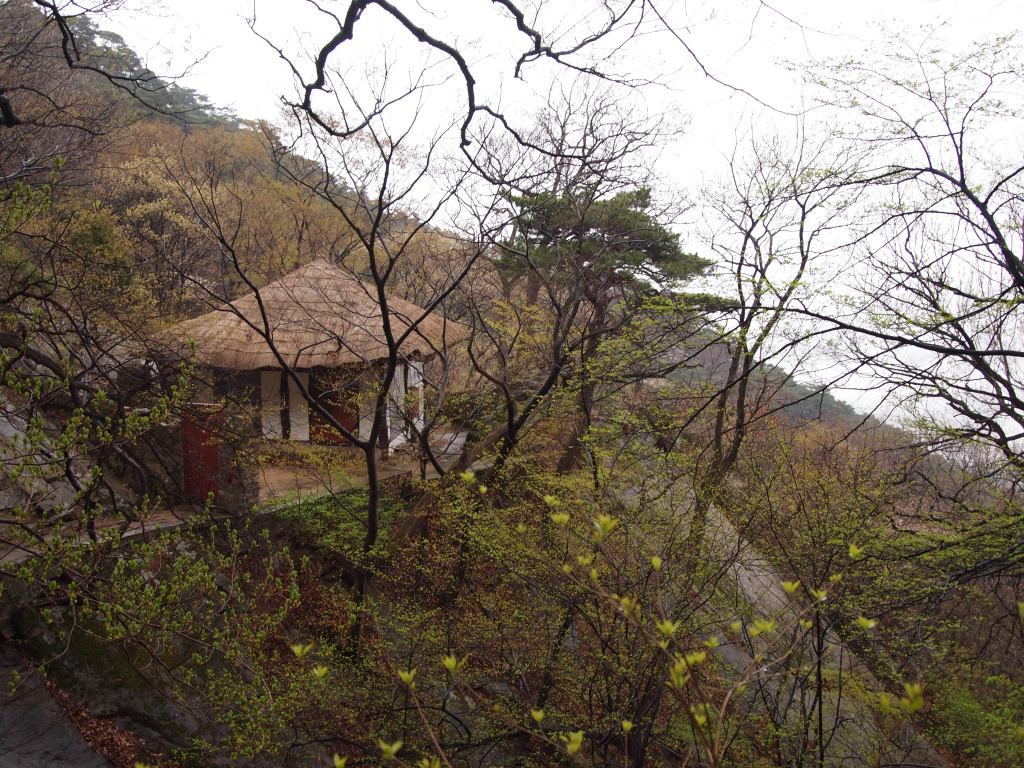 An old hermitage that is no longer used. It was built in 1925.

Another hermitage built in 1939 which is still used by the monks. 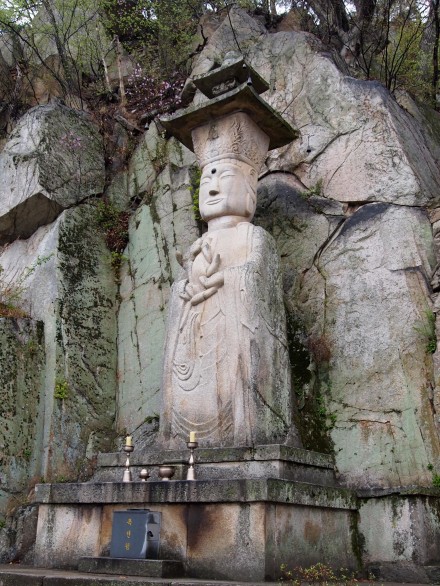 We couldn’t see much from the top

After the hike of misery (or was it a test of our new Buddhist skills?) we were allowed to sleep(!) before lunch and our departure. Looking back on the experience I am glad we did some of it, but I do wish we had had more control over which activities we participated in. While I was interested in learning more about Buddhism I didn’t want to experience a Buddhism boot camp. We left with incredibly sore bodies and exhausted minds.