We entered 2016 with a resolution to get out of Marfa at least once a weekend – partly for our sanity and partly because the holidays and recent travels have prevented us from exploring our region. So hopefully we will be out and about more in the coming months. Two weekends ago we took advantage of the beautiful weather with a trip to Big Bend National Park.

We decided to hike Emory Peak, the tallest peak in the Chisos Mountains (and the park), to complete our trifecta of Texas peaks. The trifecta includes: Guadalupe Peak, the tallest in Texas, in Guadalupe Mountains National Park; Baldy Peak (Mount Livermore), the 5th tallest, in the Davis Mountains; and Emory Peak, the 9th tallest, in Big Bend National Park. Each peak is the highest peak in its mountain range, and the ranges make up the most popular hiking destinations in west Texas. 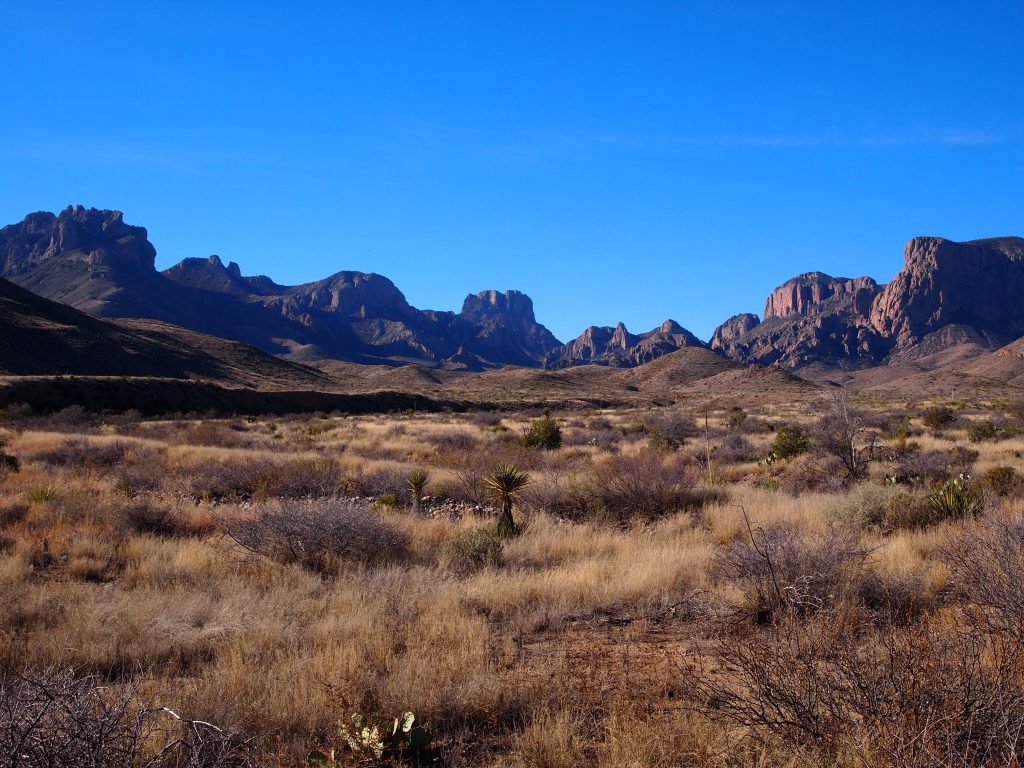 We began our hike at the trail head in the Chisos Basin. It was a gorgeous day – clear skies, temperate weather, and a cool gentle breeze. The first 3.8 miles of the trail lead up a gradual ascent until you reach a series of switchbacks which steeply weave up the side of the mountain. 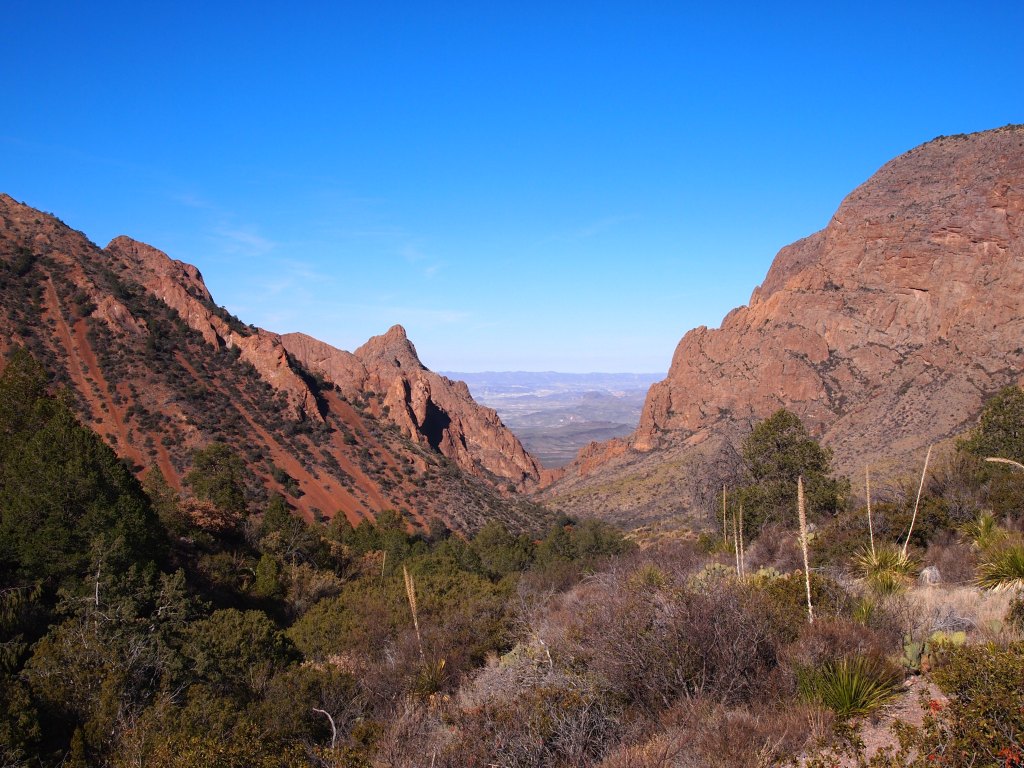 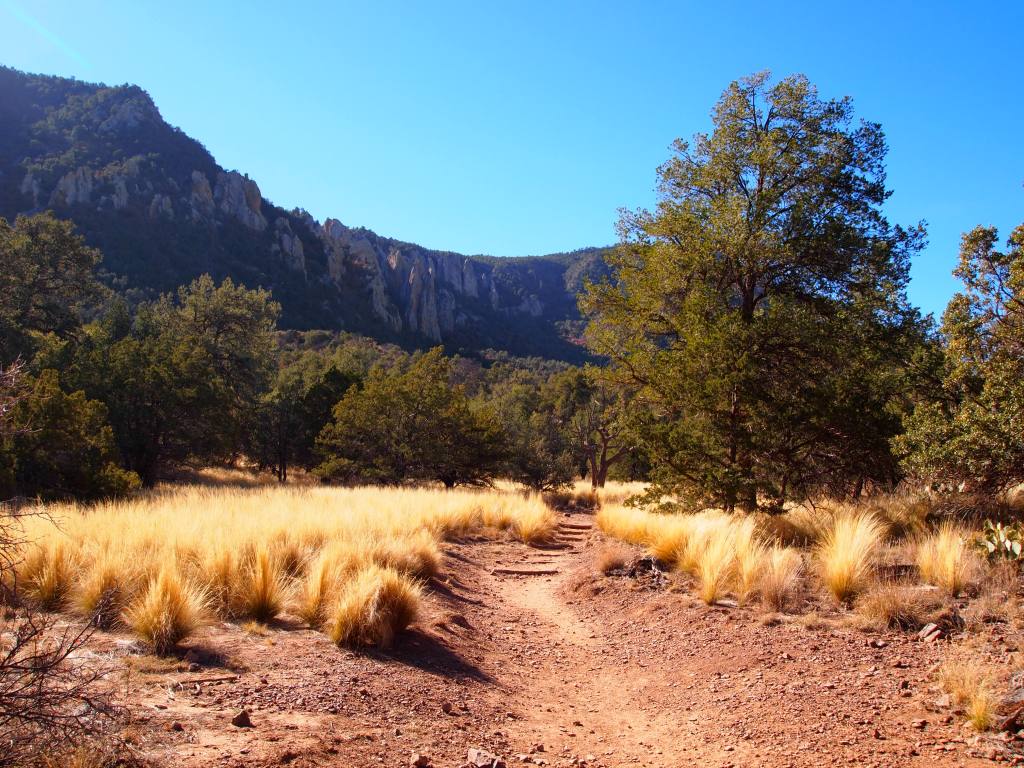 On the lookout for mountain lions… 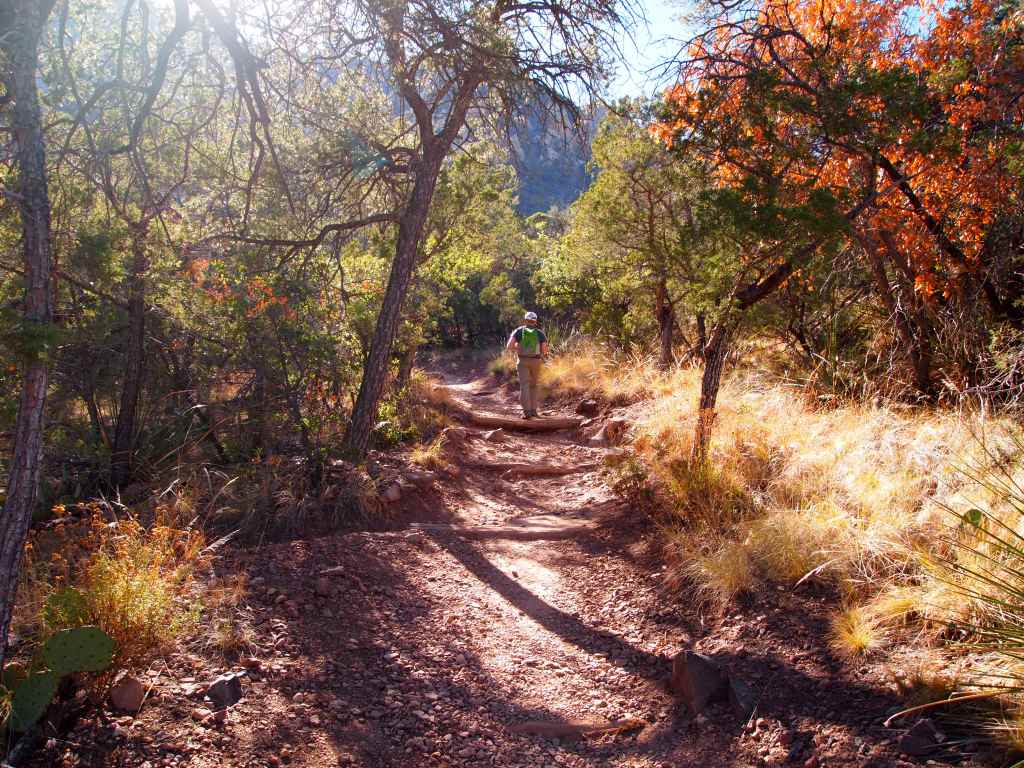 At the top of the switchbacks, the trail breaks off in several directions – Boot Canyon, South Rim, and Emory Peak. We were interrupted by a family of deer on the trail and hung out for a little bit observing them. There were also a couple of bear boxes at the top in case you wanted to leave your pack to hike the peak.

Love the bear claws – too violent?

We had another 1.5 miles to go to the peak. The rest of the trail was pretty exposed; I would hate to hike it in the summer. We had already done the bulk of the hike so I thought the last 1.5 miles would be fairly simple, but they weren’t. It was steep the last half mile, and the trail was dominated by bulky stones that made it more difficult. We finally made it to the top, and there was still one more obstacle. Technically, the top of the peak (the final 25 ft.) is atop an exposed rock face. We had to climb up the face of rock, and true to form, we went the harder way. I had read that if we went around to the right, the climb would be more manageable, but Zach had already started climbing so I followed. It was exhilarating to scale up the rock face and reach the top. The views from the top of the rock are incomparable to those below it. Some people don’t make the final ascent, but I can’t imagine not having done it. 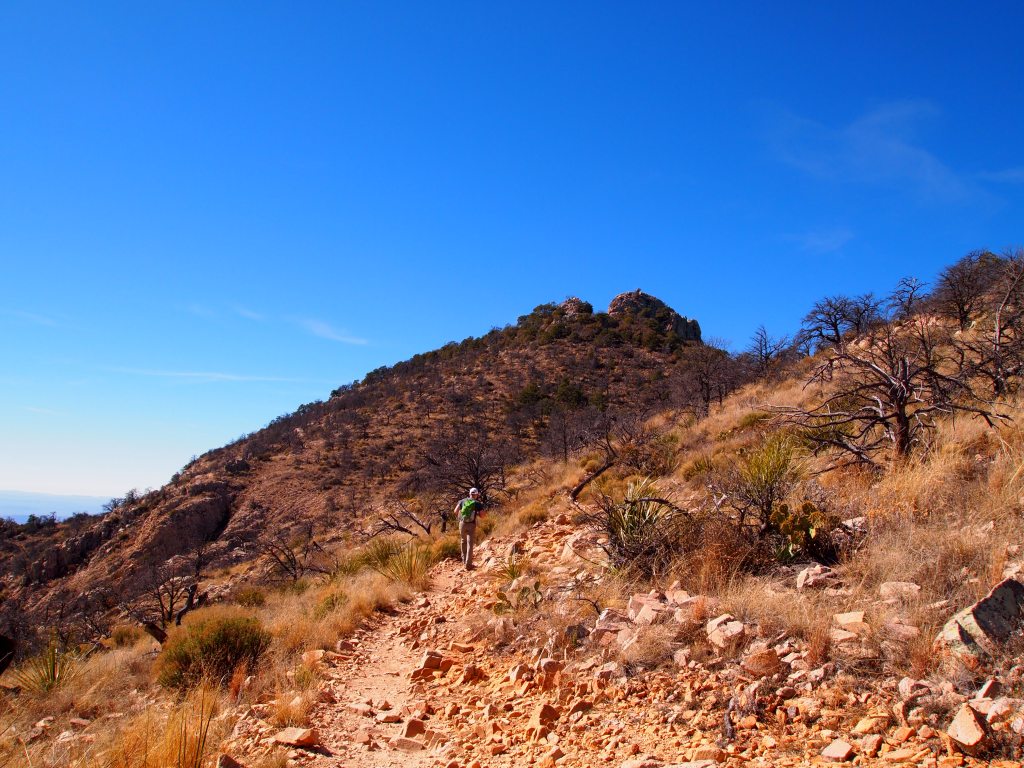 We climbed straight up because we’re dumb 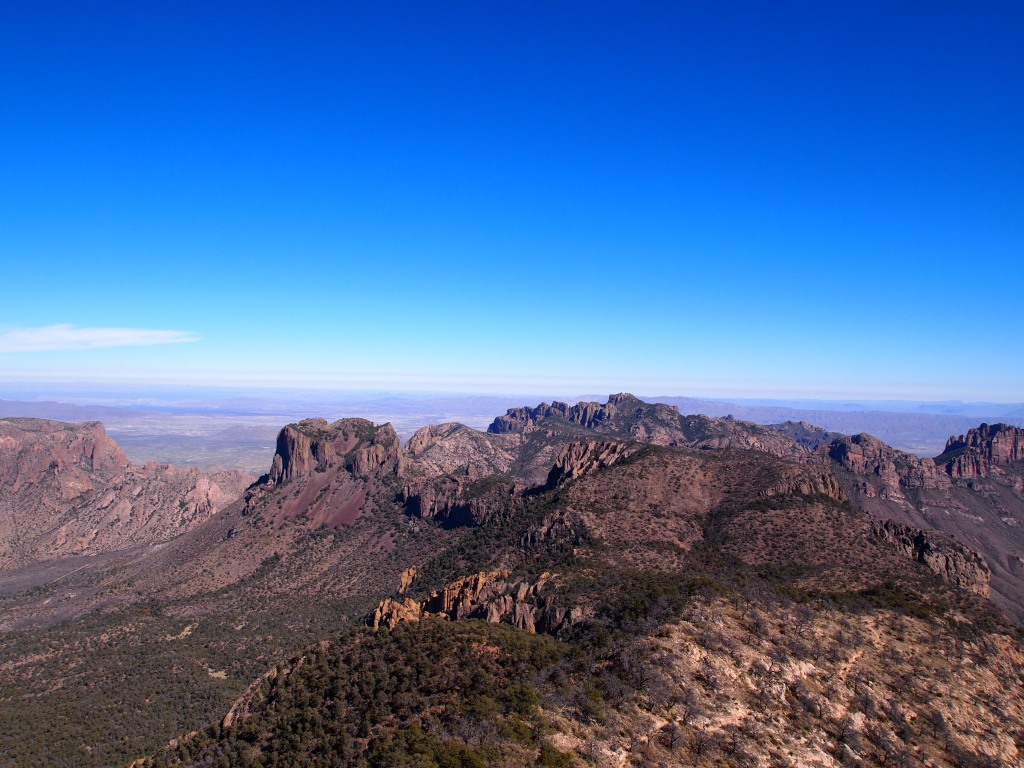 Spectacular views from the top!

Santa Elena Canyon is visible in the distance 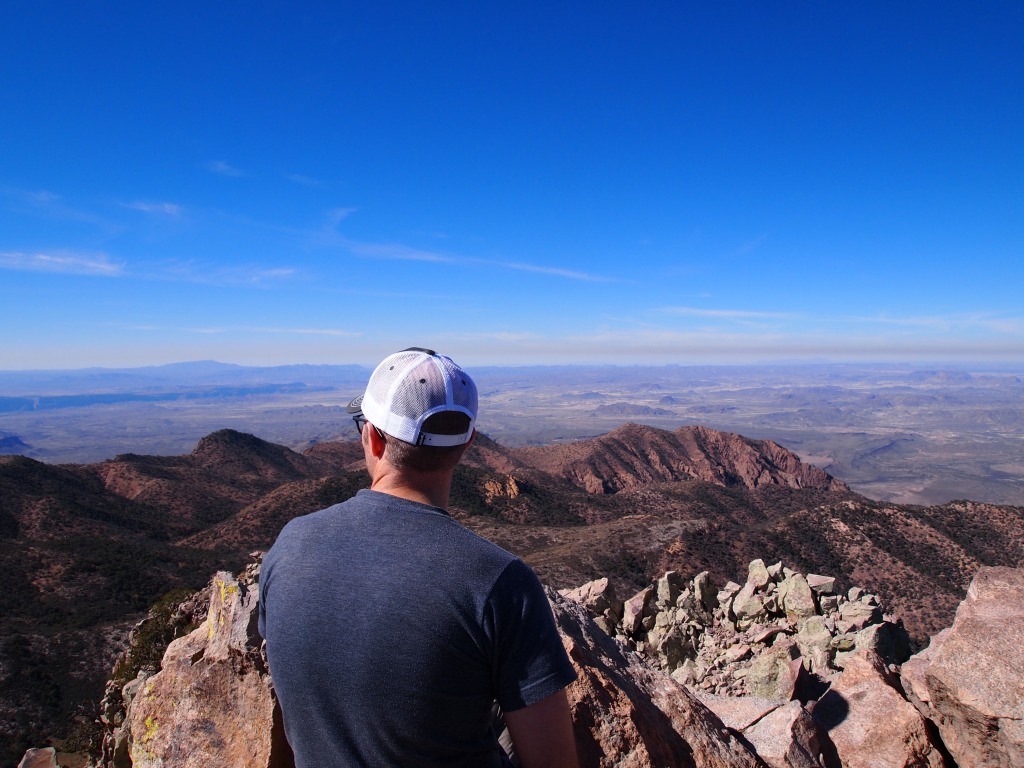 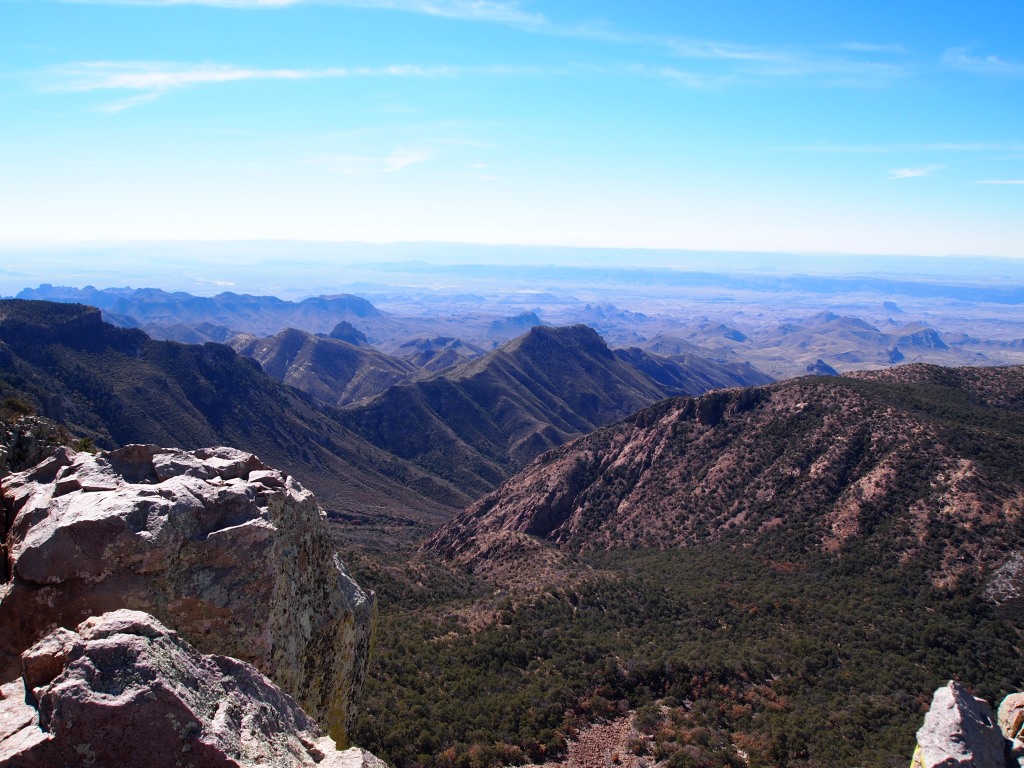 It was such a gorgeously clear day that we were able to see the Davis Mountains faintly in the distance – an absolutely stunning sight.

We climbed down and made our descent. We followed the same trail back to the Chisos basin, though this time it felt like a much longer trek. Exhausted and ready to replenish our bodies, we left the park and headed to Marathon to eat and drink at the White Buffalo Bar. Can’t wait to get back out to Big Bend in the coming months! 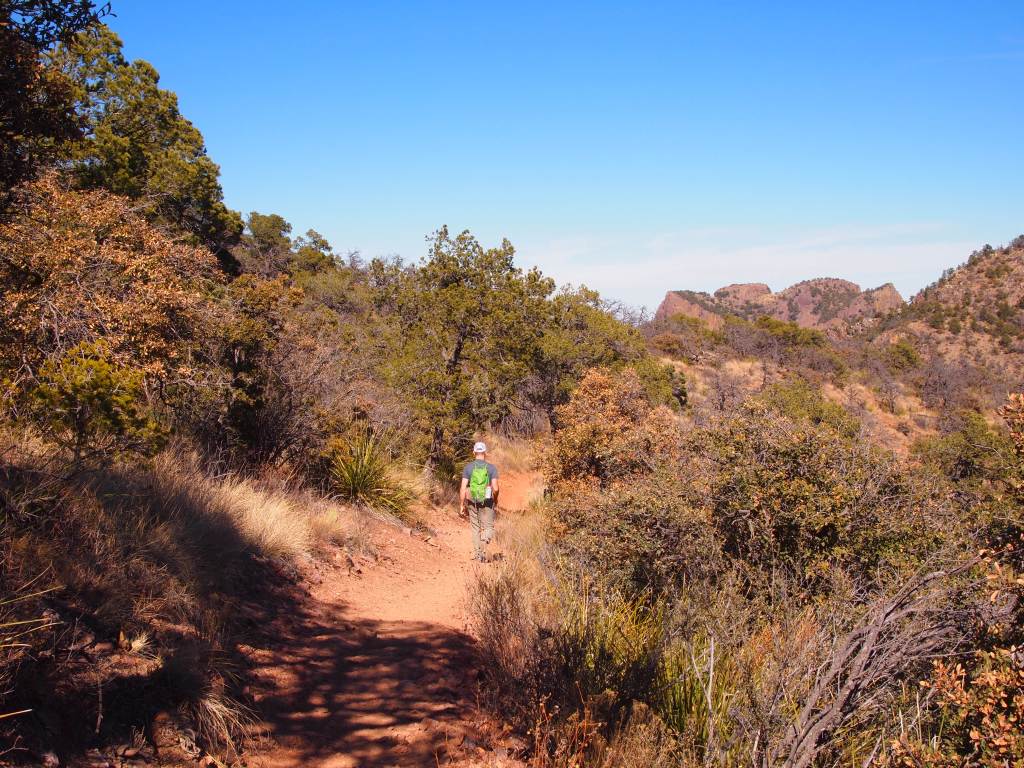 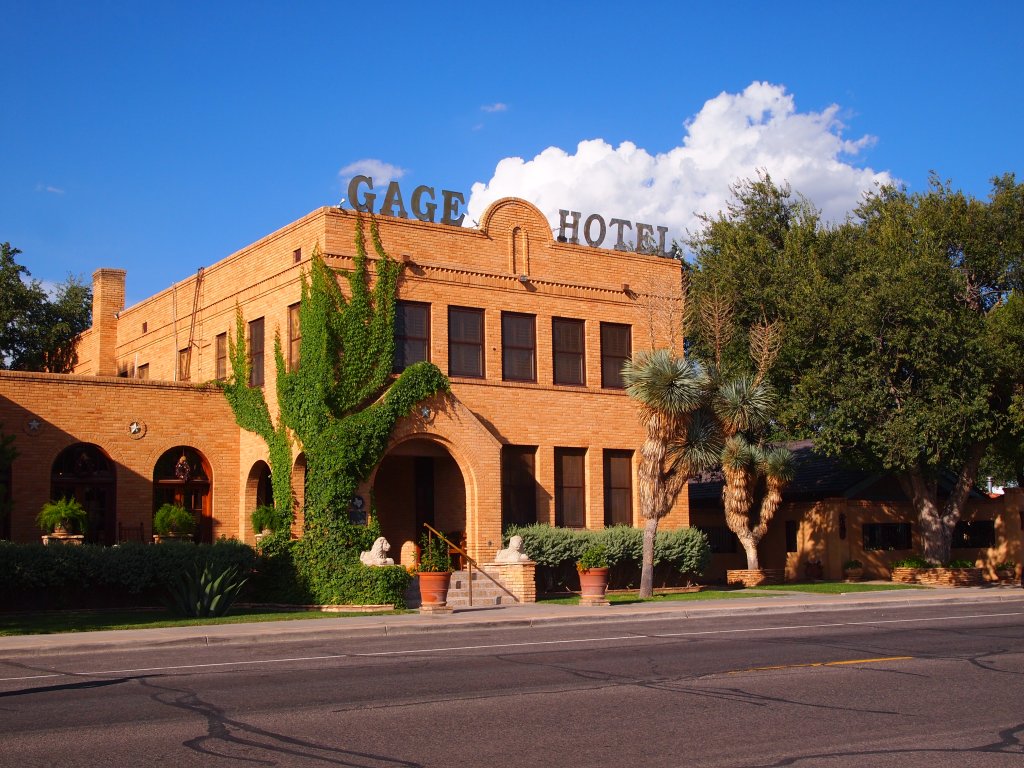 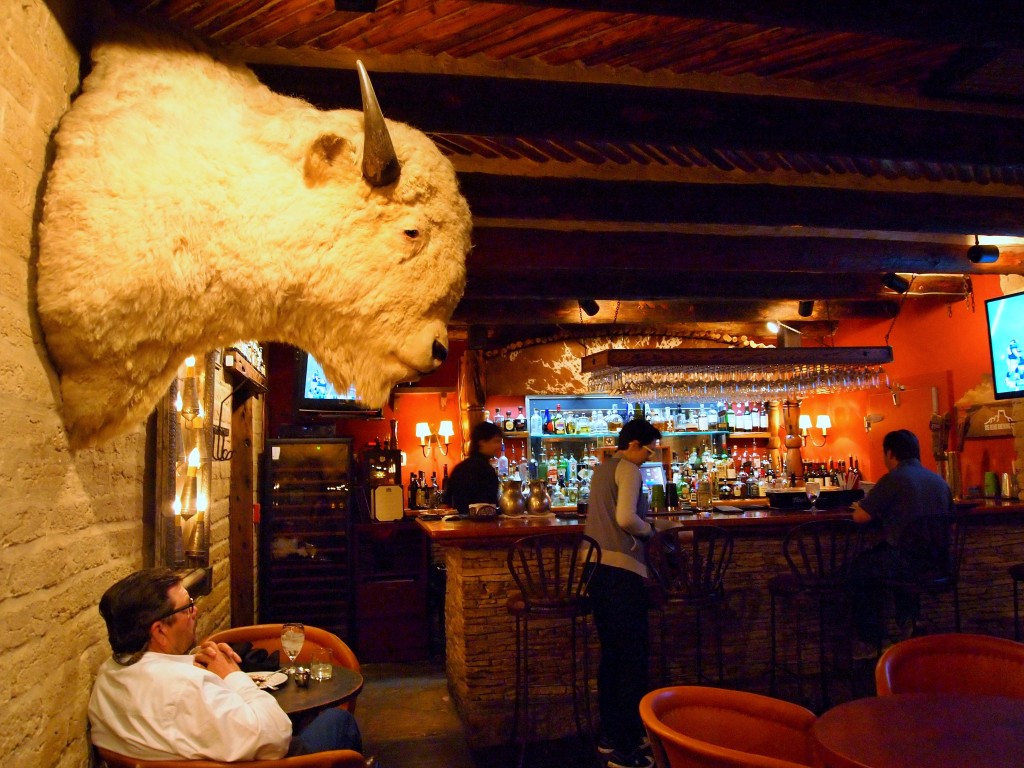